Edit 9/24/17: As I continue to look at pictures of “gazebo thingies” at the top of turrets for inspiration, I’m starting to think that what I’m making would more accurately be called a cupola, not a widow’s walk. I changed the title of the post to reflect this.

Last time, I posted about the bell-shaped copper roof for the Victorianna’s left tower. I didn’t want to do the exact same thing on the right side. Since the house is made from two Victorianna kits built back to back, it’s perfectly symmetrical, but Victorian houses usually aren’t symmetrical. So I decided to make one of the towers taller than the other. 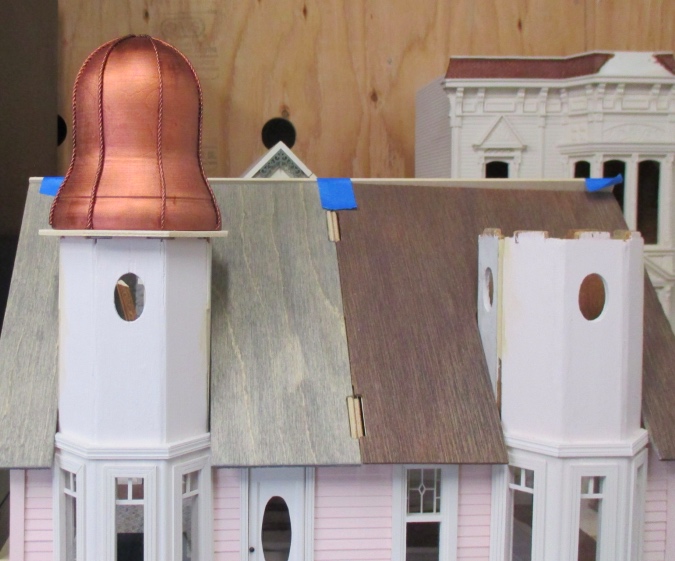 (Note: In hindsight I wish I had eliminated one of the towers completely and turned it into a peaked gable to look something like this. Too late for that now.)

I poured over photos of Victorian houses with turrets and started thinking about turning the top part of one of the towers into a sort of observatory with windows. Some Victorian houses have what looks like a gazebo up on the roof, and I thought I could use a 1:48 scale gazebo to emulate that look. Most of the ones I found were six sided and my tower has eight sides, so my options were limited.

I ended up buying this one from Laser Dollhouse Designs. I’m leaving off the base, and I’ll add strip wood to the windows to make them look more like the lower part of the tower. This picture shows the roof from the kit, but instead I’m going to use a (smaller) bell that matches the other tower roof. 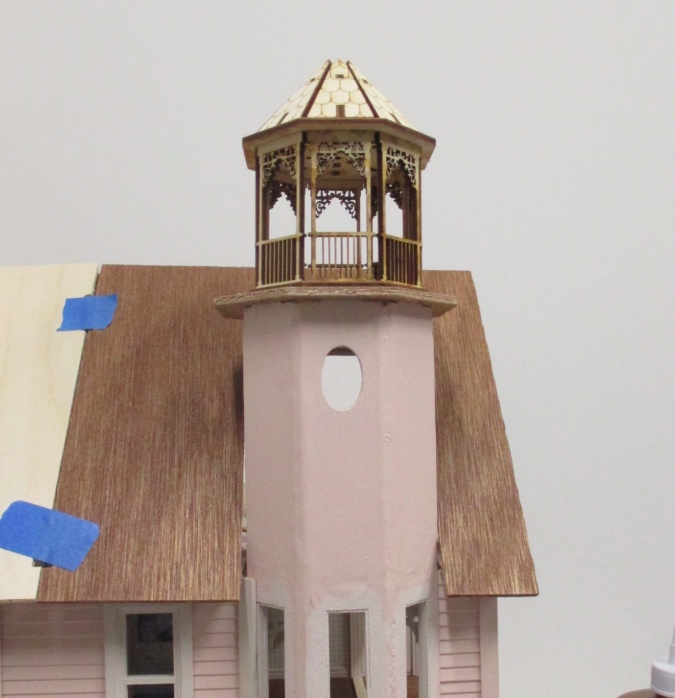 The inside dimension is only 2.5 inches tall (the equivalent of 5 feet) which is a bit short for a half scale person to stand up in, and I also wanted the windows to have a purpose and not be a separated-off thing that these imaginary people could never reach. To address these issues, I cut holes in the floor and ceiling. The piece with the hole below is the kit piece that’s supposed to form the bottom of the tower roof. I traced the hole onto the octagonal pieces from the gazebo kit. 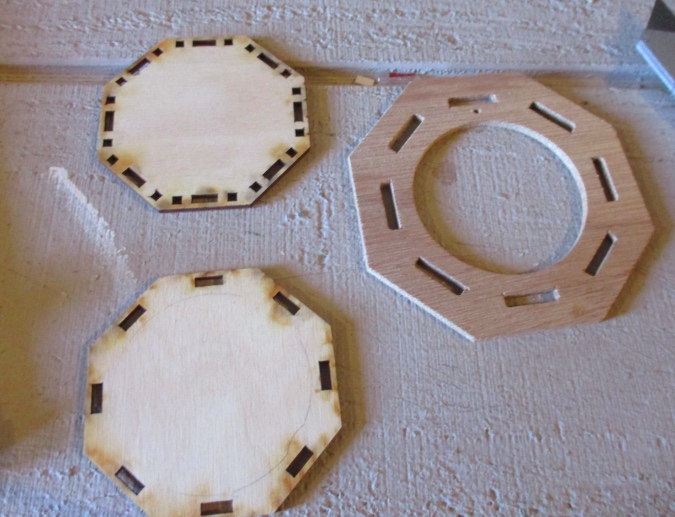 (I’m using what would have been the very bottom of the gazebo, if I hadn’t left off the base, as the top piece that goes above the windows. It’s slightly smaller than the octagon that normally forms the bottom of the gazebo roof, and closer in size to the bell I bought for the roof.)

Geoff helped me cut them with whatever this is. A circular saw hole saw attachment on the drill press, I think. 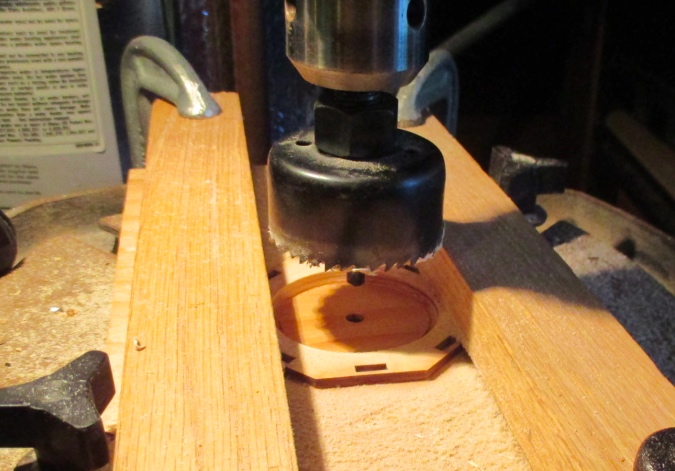 The traced hole came too close to the holes that the gazebo wall tabs get inserted into, so we made the hole slightly smaller than the original. It’s also a little bit off-center but you won’t be able to tell. 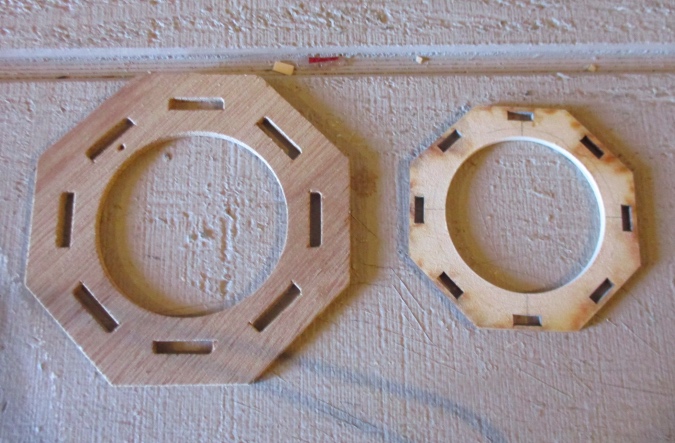 At 3.25″ across, this octagonal piece exactly fits inside of the tower walls, so I decided to do away with the piece from the kit that fits into these tabs (the one shown above with the hole in it). 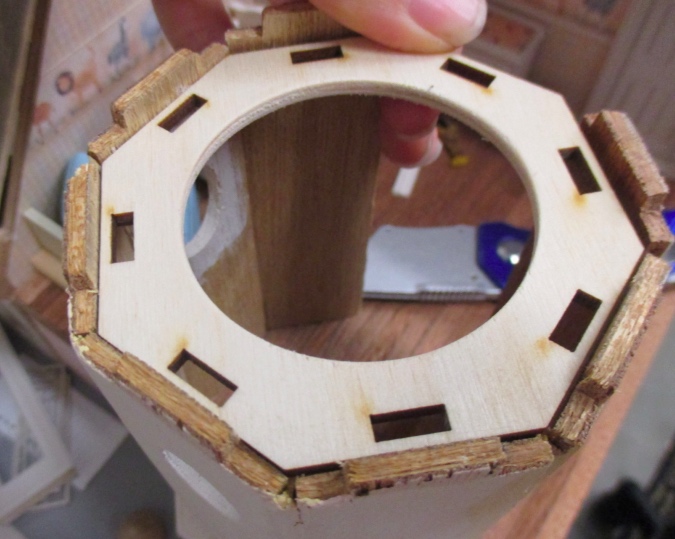 I used the utility knife to cut off the tabs. Of course this would have been easier before the tower was assembled! I started by making several vertical slits in the tab. 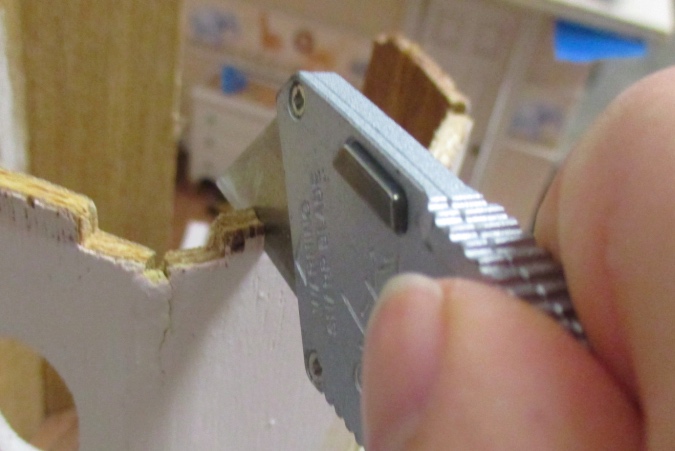 Then I cut sideways, and the tab chipped off in pieces as the knife reached each of those slits. 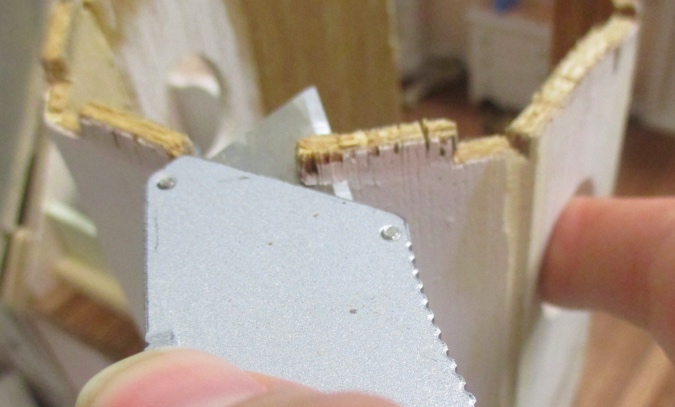 After cutting off the tabs I sanded with the mouse sander to make the wall tops relatively flat. I’ll position crown molding inside the tower room so the floor of the gazebo can sit on top of it. 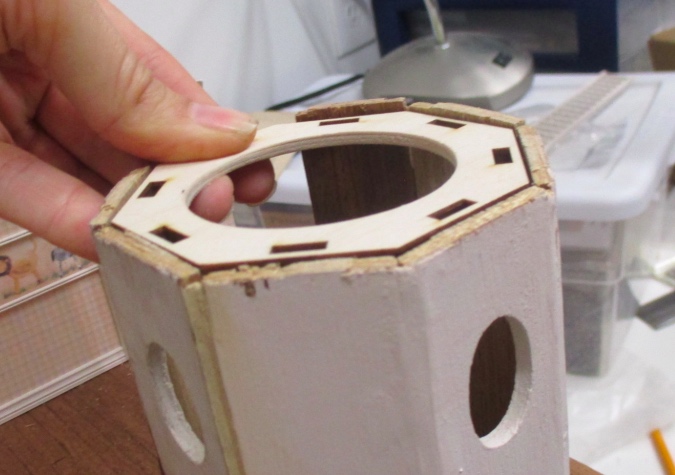 Next I wallpapered the room. The tower is going to have a staircase leading up to the observatory which makes it more like a hallway than an extension of the baby’s room, so I didn’t want to use the nursery paper. This is the pink paper that appears throughout the house. It’s almost gone but luckily I had a piece just large enough to do this room. 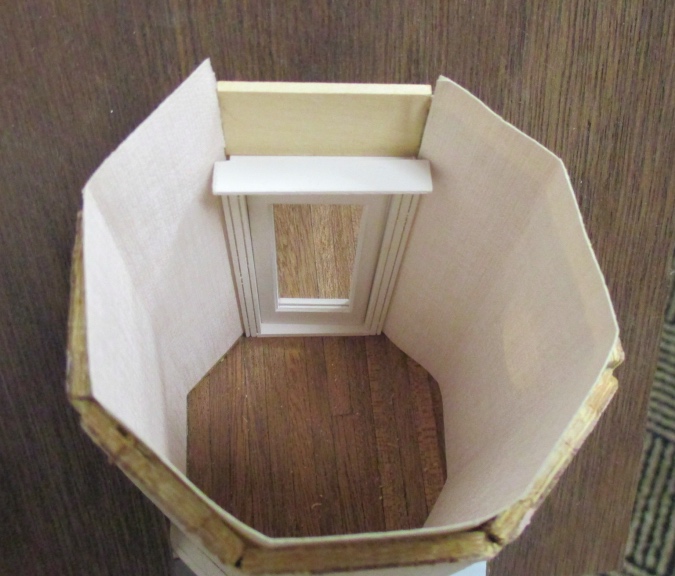 The piece of paper was only long enough to cover seven of the eight sides. I covered the part over the door opening separately, leaving a lot of paper on either side to account for the larger piece of paper being not quite long enough to reach the edges. Below this, the exposed edges will be covered up with door trim. 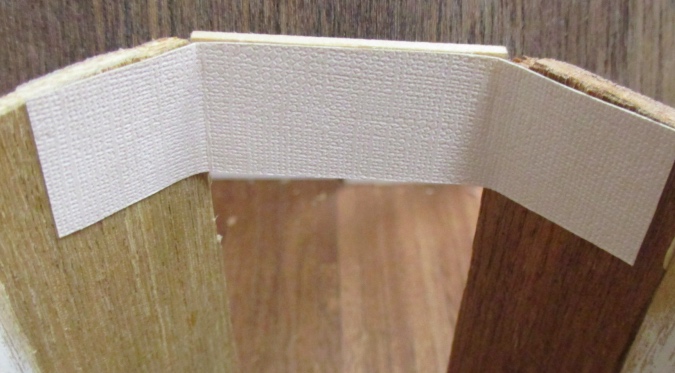 Here’s what you’ll be able to see of the tower room. I’m planning to add a spiral staircase that leads up to the gazebo widow’s walk cupola thingie. 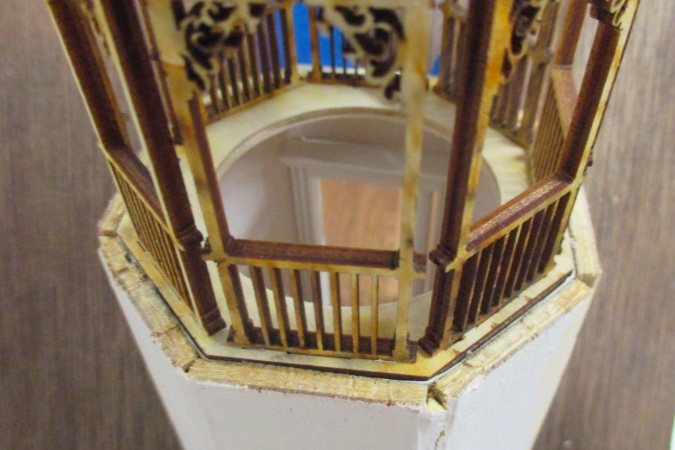 So here’s the idea. I do like the staggered heights, but even using the smaller piece at the top of the gazebo, the bell dome on the gazebo seems too small. I was limited by the bell sizes available so going bigger wasn’t an option. 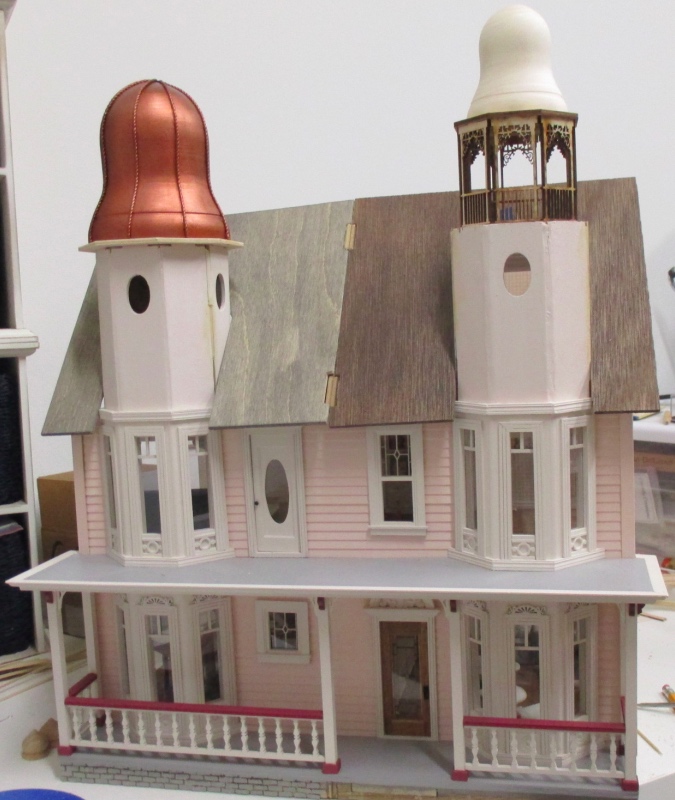 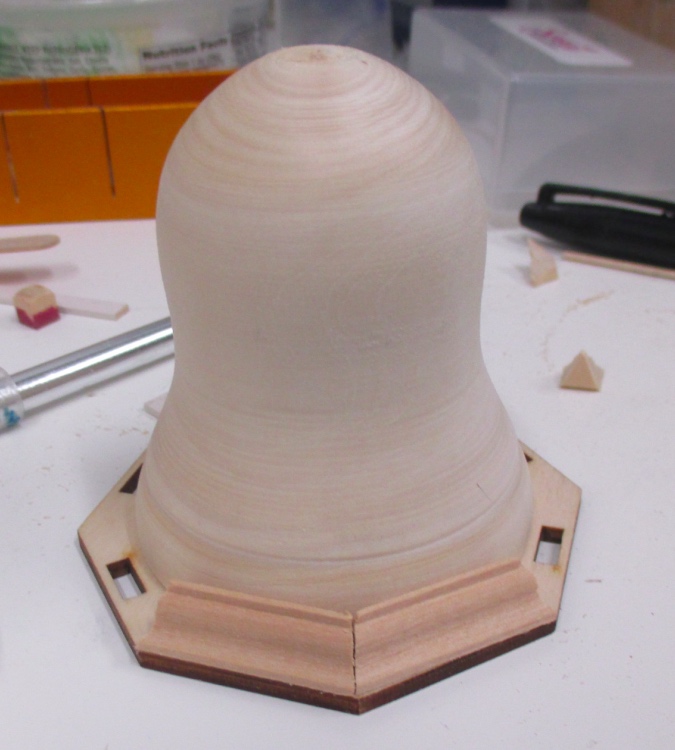 I think that helps make the bell roof look like it belongs. There will also be some sort of crown molding trim around the top of the tower wall that should make the transition to the gazebo a bit more elegant. The doodad at the top is a bead cap with a Houseworks 3/4″ finial inserted. 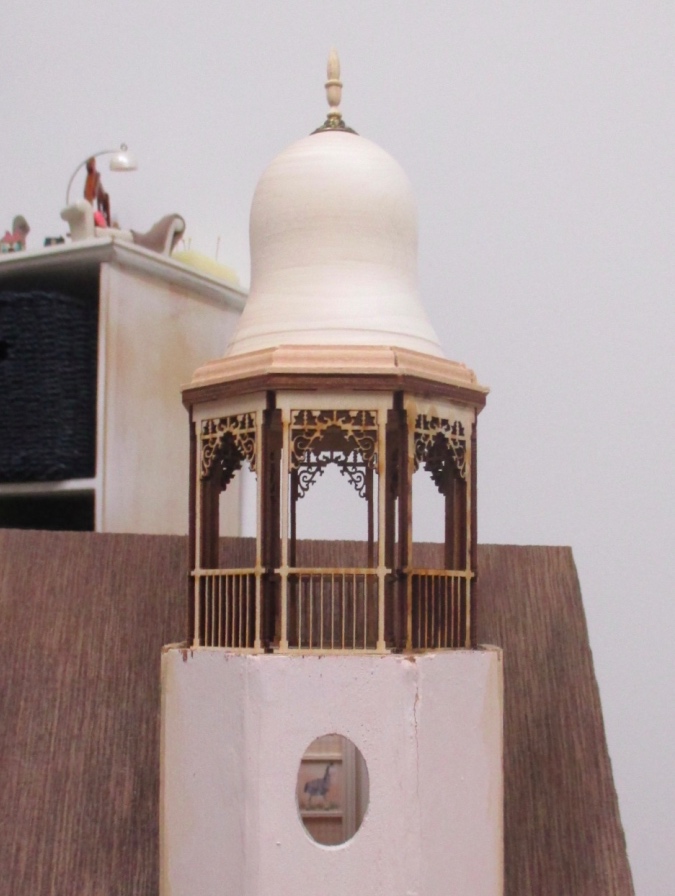