People tell me they like my blog because I show when I make mistakes. This is going to be one of those posts, because today was one of those days when everything I tried to do went wrong.

The screen door on the screened-in porch is supposed to be glued in place, but I thought, why not hinge it? (Because hinges always go wrong, that’s why…) You might have noticed in my last post that the door is quite a bit narrower than the frame. 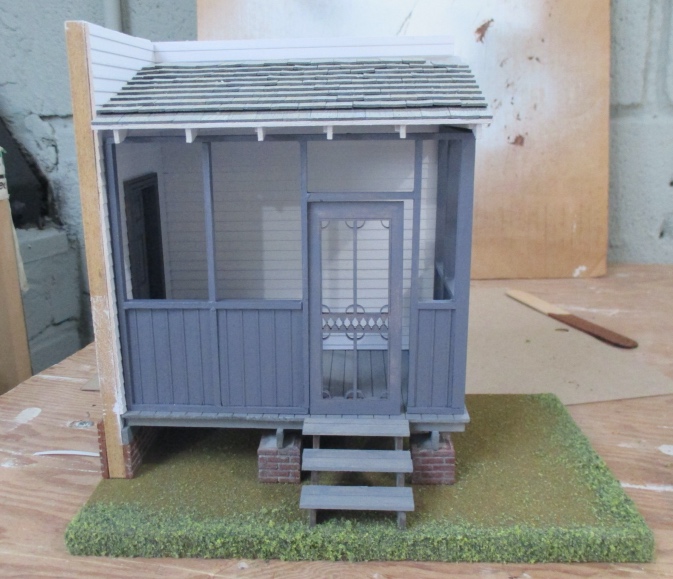 The kit came with two pieces of 1/16″ thick wood that are supposed to be glued to either side of the door, to make it wide enough to fit in the hole. I decided to hinge the door to one of these pieces, with the plan of gluing the pieces to the frame rather than to the door. I used these teeny tiny hinges left over from making the Rowhouse’s attic stairs. 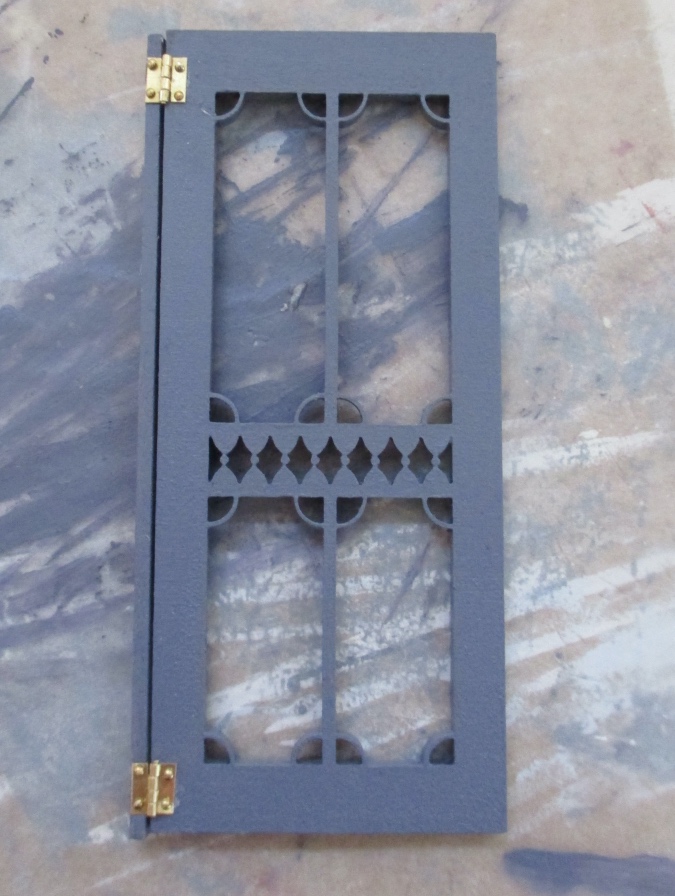 Hinges are always tough to do, but I managed to get these in without too much trouble. But when I looked at it in place, I didn’t like the look of the hinges. They look fake. 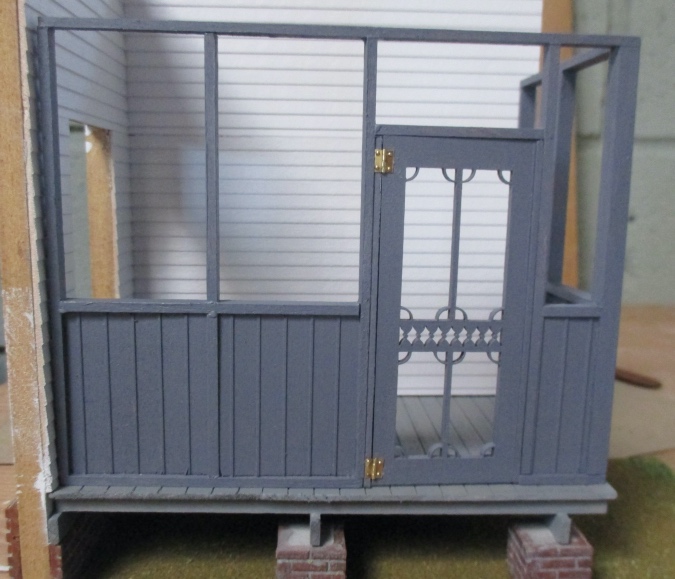 It also seemed weird for the screen door to swing out over the stairs. 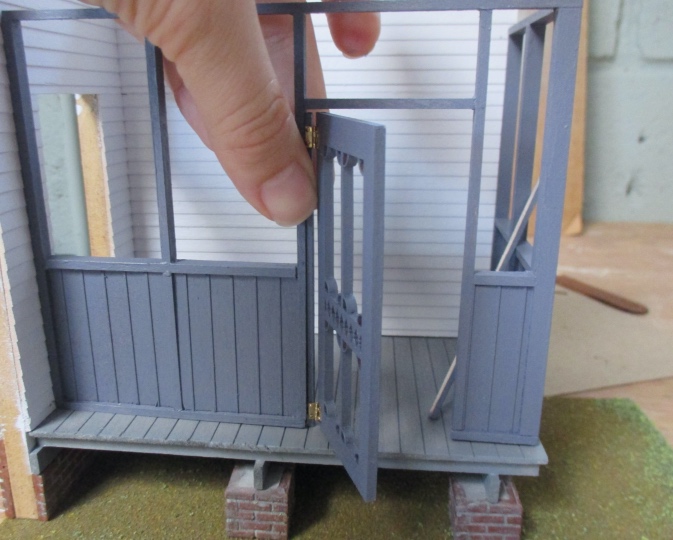 Then I noticed I’d accidentally put the hinges on the *back* of the door. The front of the door has more detail. 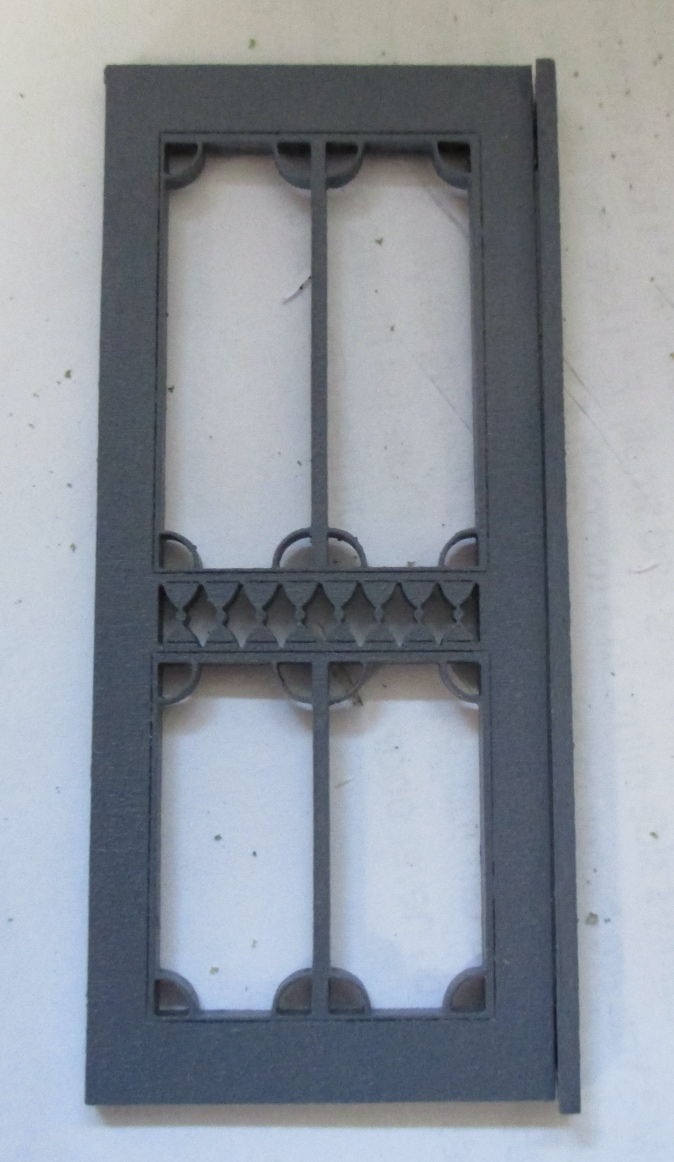 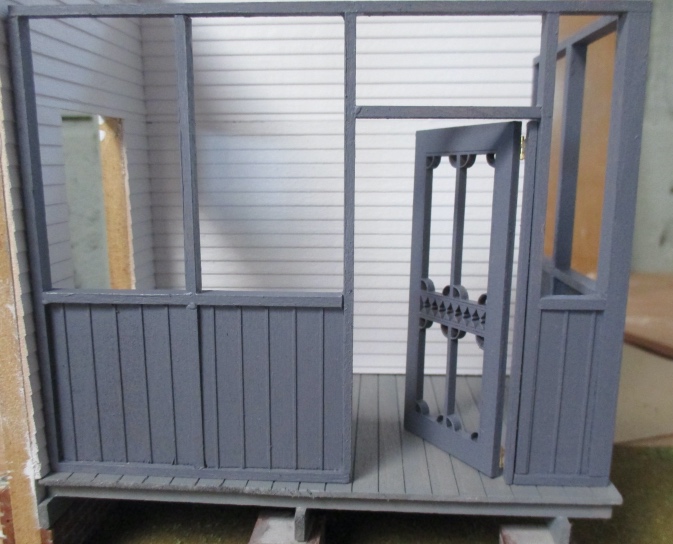 I added one more hinge for good measure. 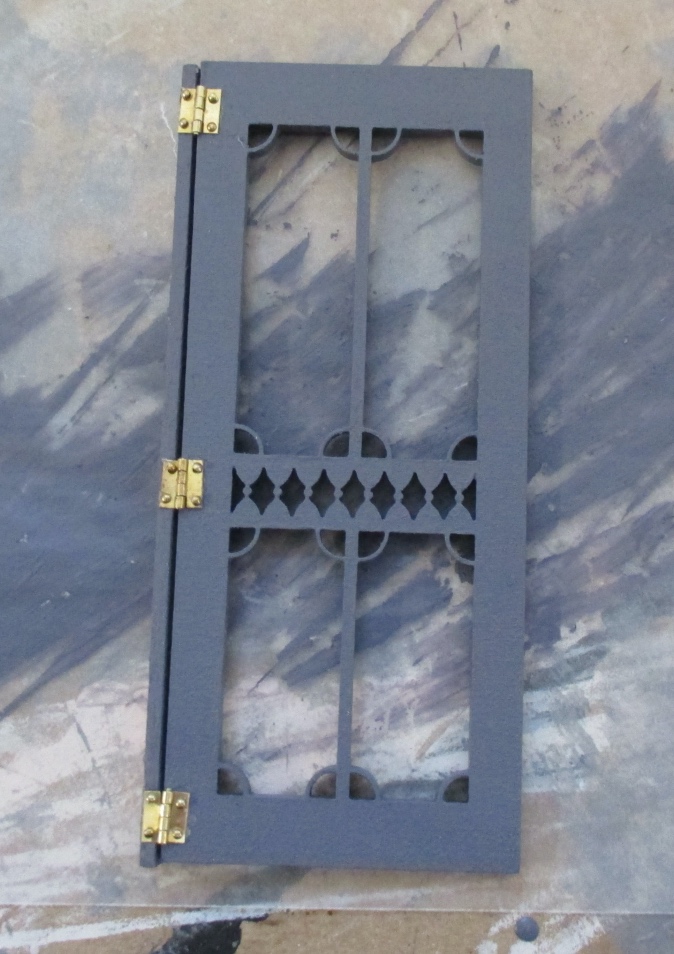 Then I glued the screen material to the back of the door. The porch comes with trim to cover up the edges of the screening, but the door doesn’t. Having it swing in will make this messy back less visible. 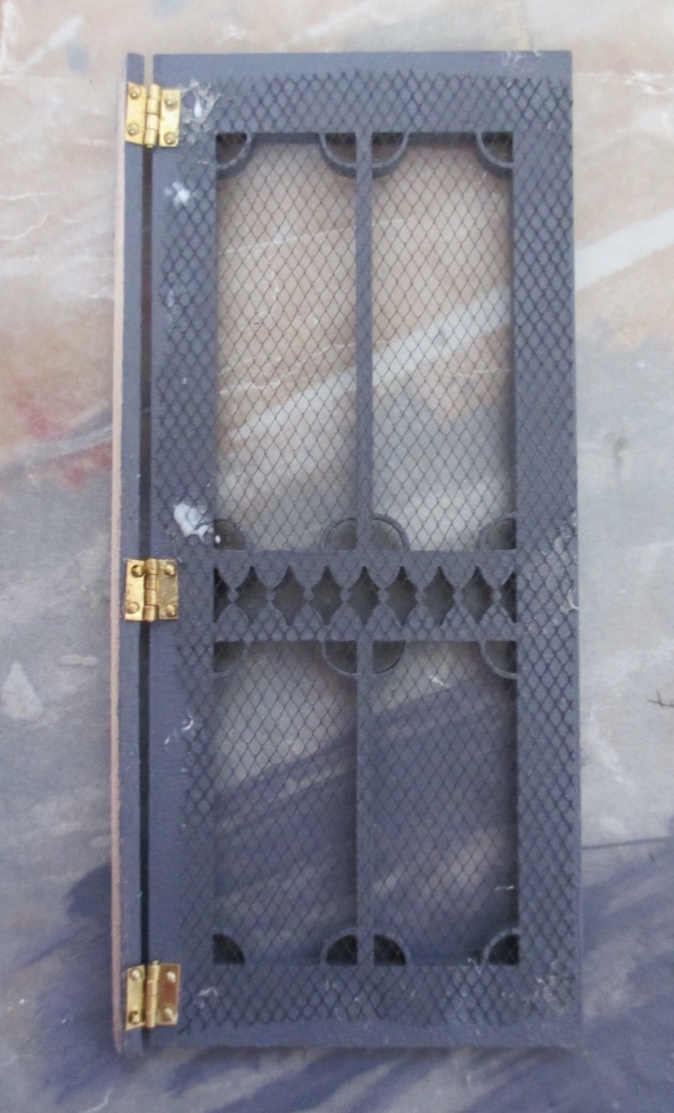 Here’s how it looks from the front.

Next I did the porch screens. This was so frustrating. The material is stretchy and I had a hard time cutting it in a straight line. I didn’t want to waste it trying to cut pieces that were an exact fit, so I left extra around the edges planning to cut them back after the screen was glued in.

The instructions said to use a dot of glue at each corner, but that just didn’t work. 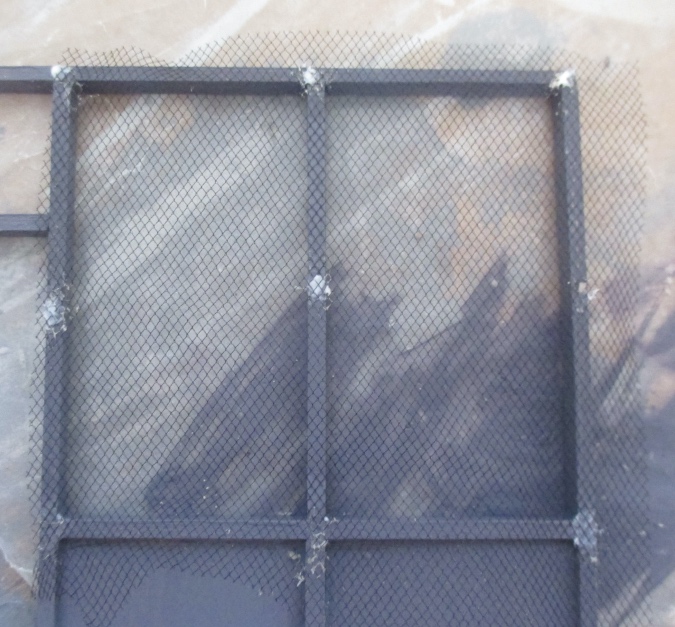 I added the trim pieces so the glue on the back of the trim could help hold the screen in place. My theory was sound, but this was very finicky and I didn’t get the screens as tight as I wanted. 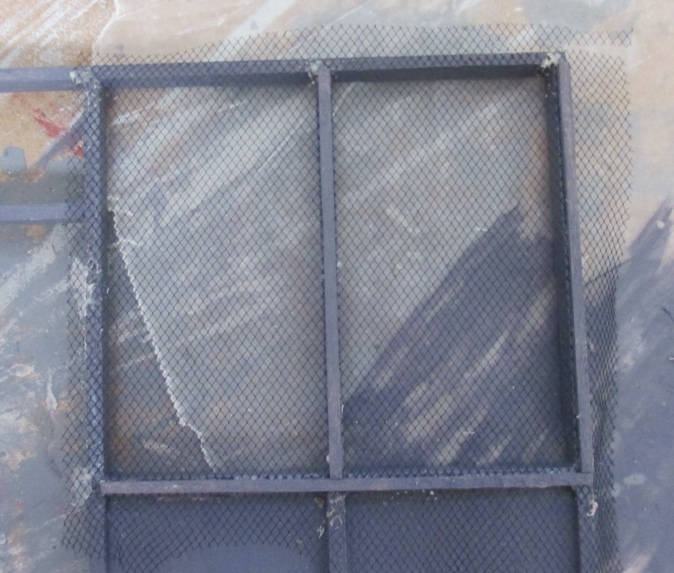 It worked, but not without a lot of frustration and dried glue all over the place. Luckily you can’t really see this side once the porch is assembled. 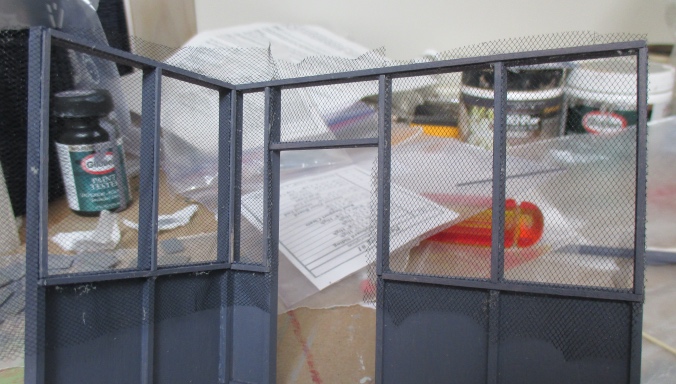 I used nail scissors to cut the screen as close to the edge as possible, but there are still little nubs sticking out. I tried using an Xacto knife but just ended up slicing into the wood. 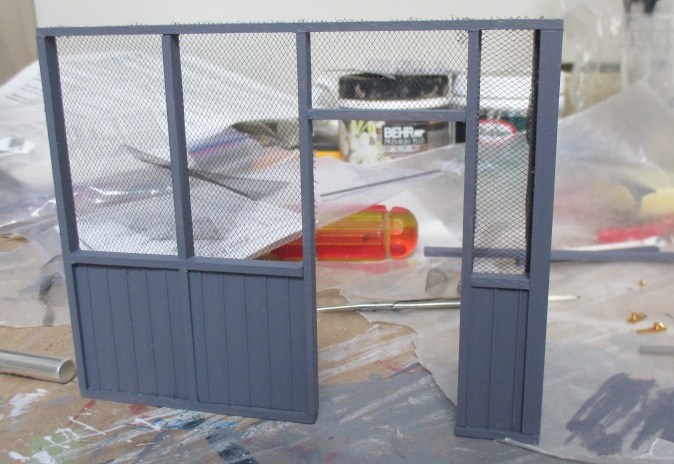 I added wood filler to close up the gap where the screen material was sticking out. 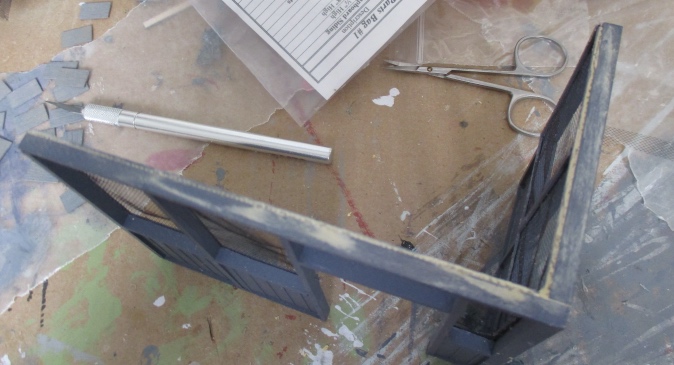 Then I painted over it. My hope was that the paint would slick down the little nubs so they wouldn’t be noticeable. 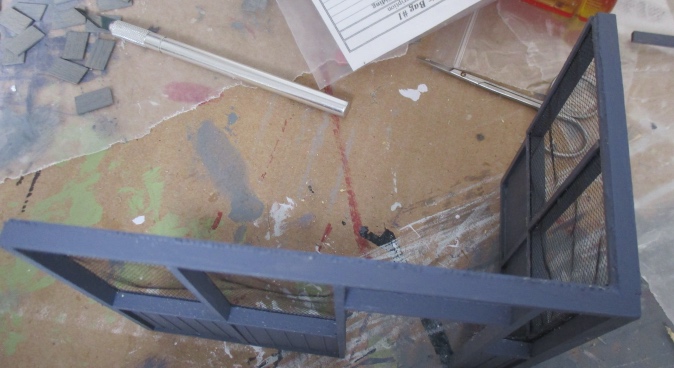 I ended up adding strip wood to the top of the porch, to hide the nubs. 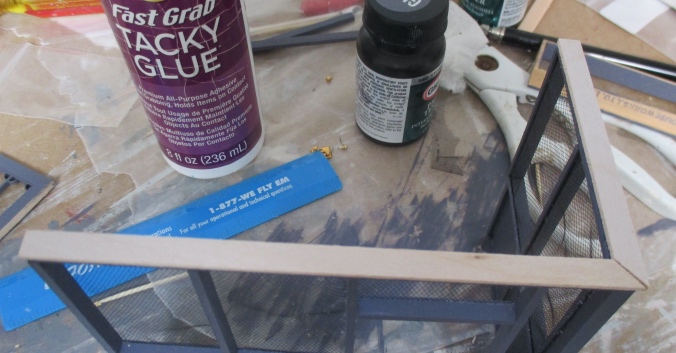 Back to the door. When I tried to make a hole for the doorknob to stick through, the wood split.

Sigh. I glued it back together, filled the crack with wood filler, and painted over it. 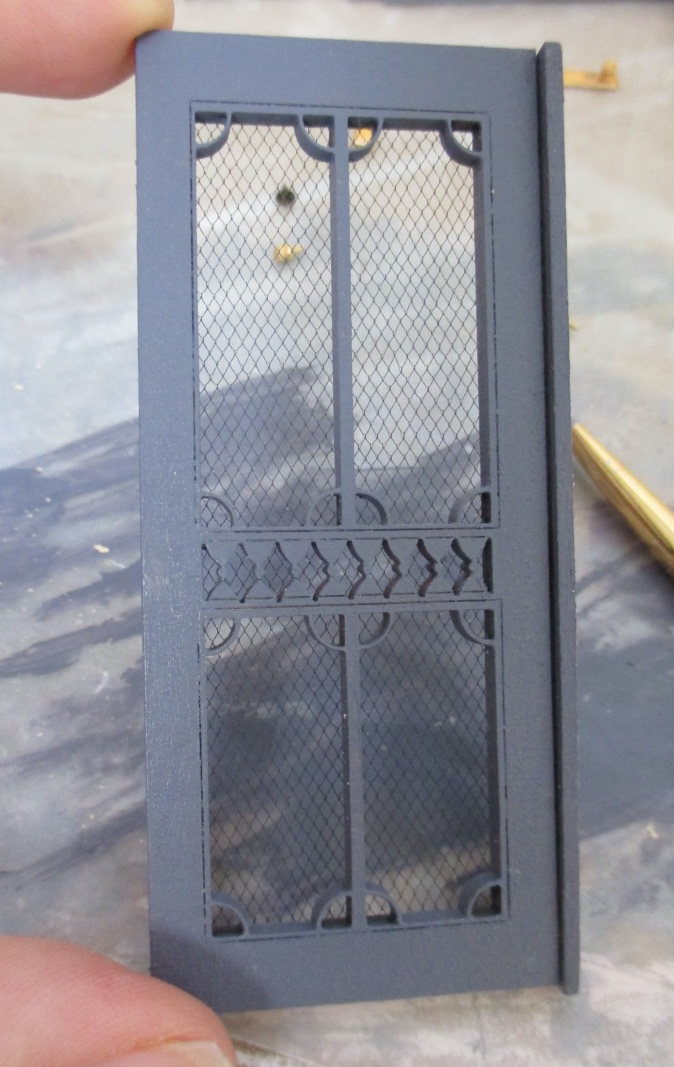 I didn’t want to risk splitting it again, so I had to use a doorknob that could be glued on rather than poking through. This is not the right kind of doorknob for a screen door, but it’s what I had. 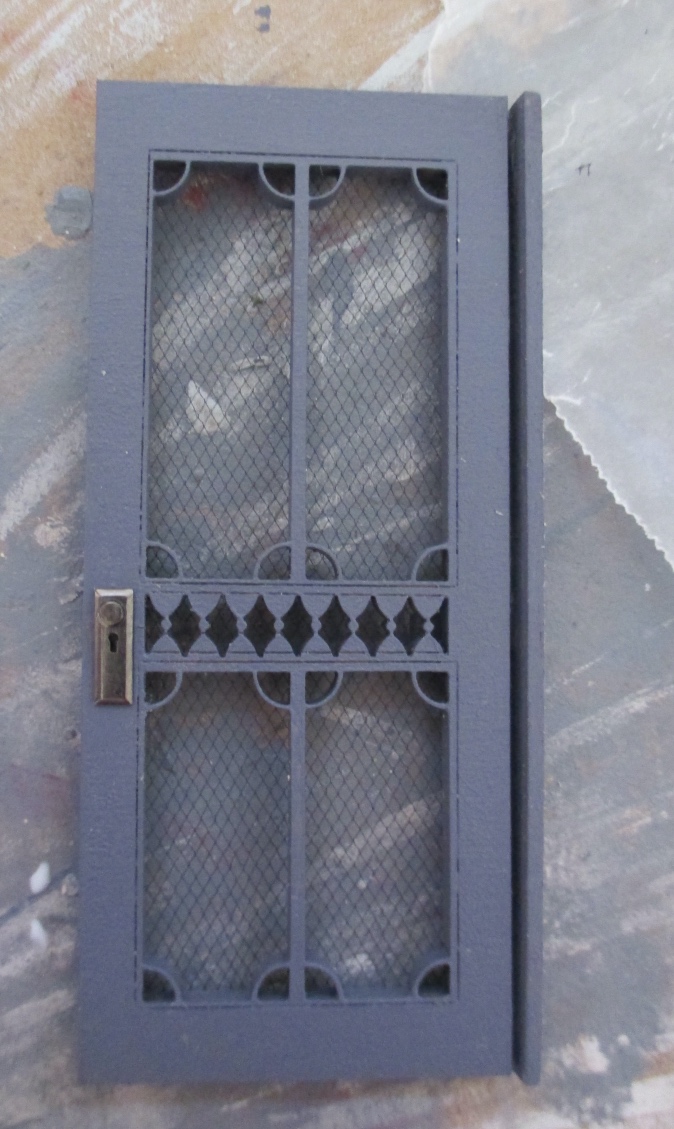 Next I glued the hinged part of the door into the frame. 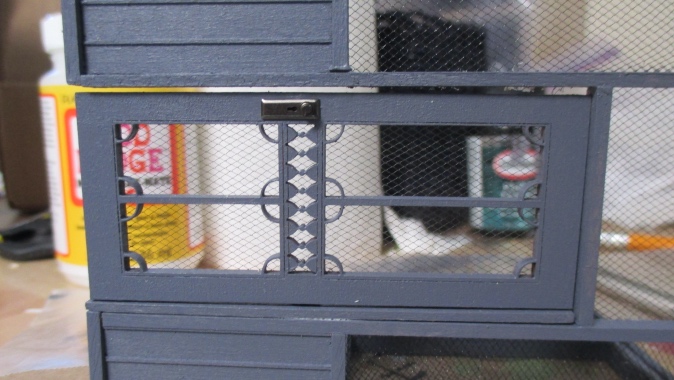 And somehow as I was doing this, all the nails from the bottom two hinges popped out. Arrrggghhhh! 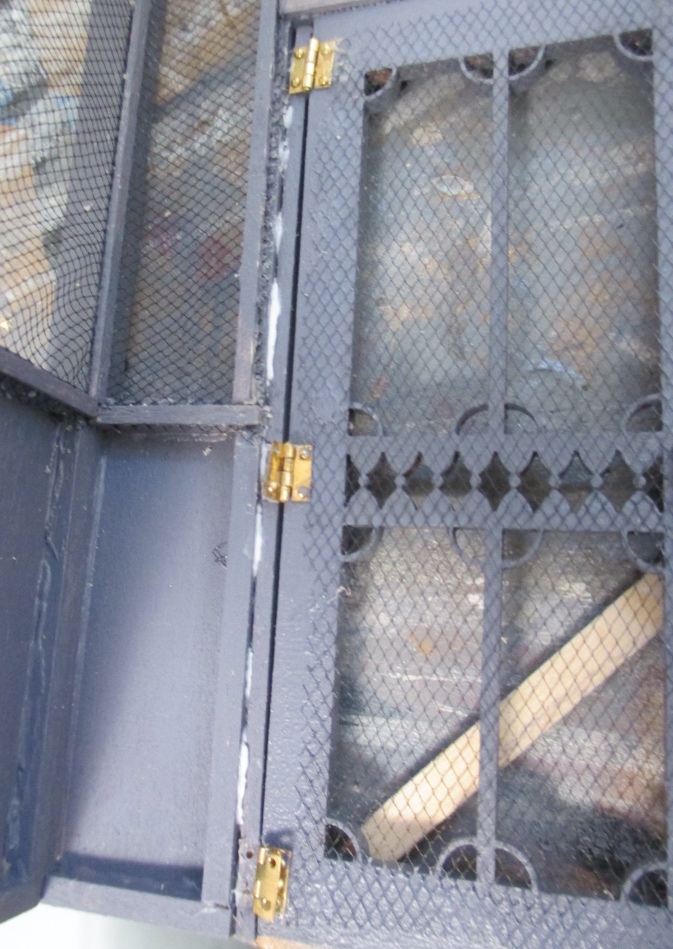 I wanted to glue the nails back in but I couldn’t find them, and I didn’t have any more. I tried substituting brads, but the brads were slightly longer than the depth of the door. I ended up super gluing the hinges to the wood. Luckily the hinges are on the back of the door, so I can get away with not using nails. Now I just have to hope that super glue holds…

The door plus the two pieces of trim was a snug fit to begin with. The hinges added a small gap between the door and the right-side trim, so now the left-side trim *barely* fit. I sanded it a bit, but it was still very tight. 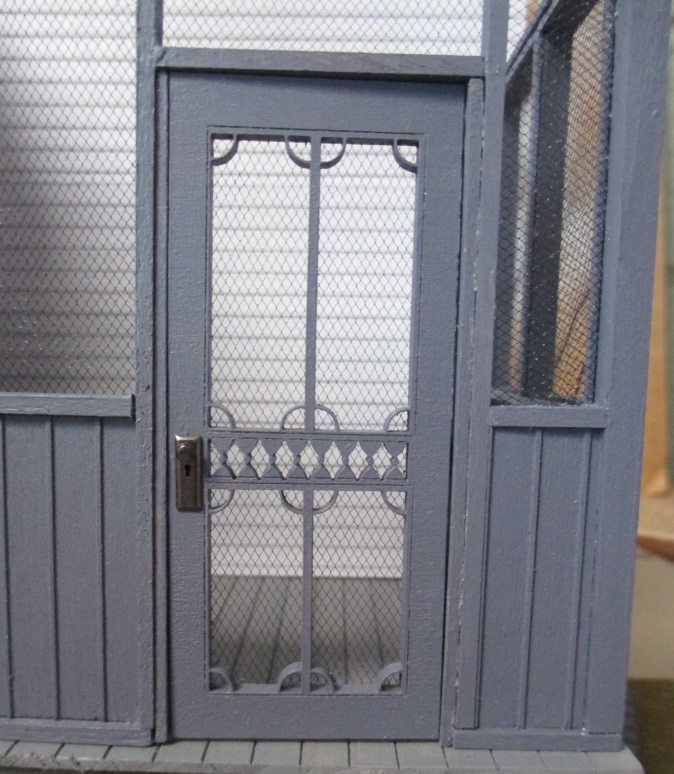 After going to the trouble of hinging the door, I wanted it to actually swing open, so I swapped in a thinner piece of trim. 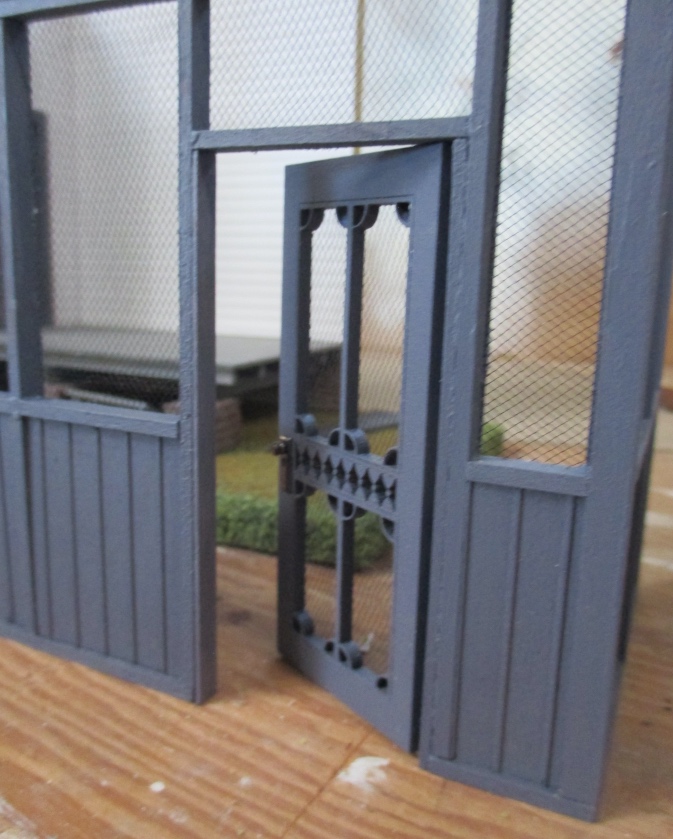 This means the trim around the door isn’t quite symmetrical, but it’s only a 1/32″ difference. I need to do another coat of paint on the new piece of trim, but once that’s done I hope it’ll all blend in. 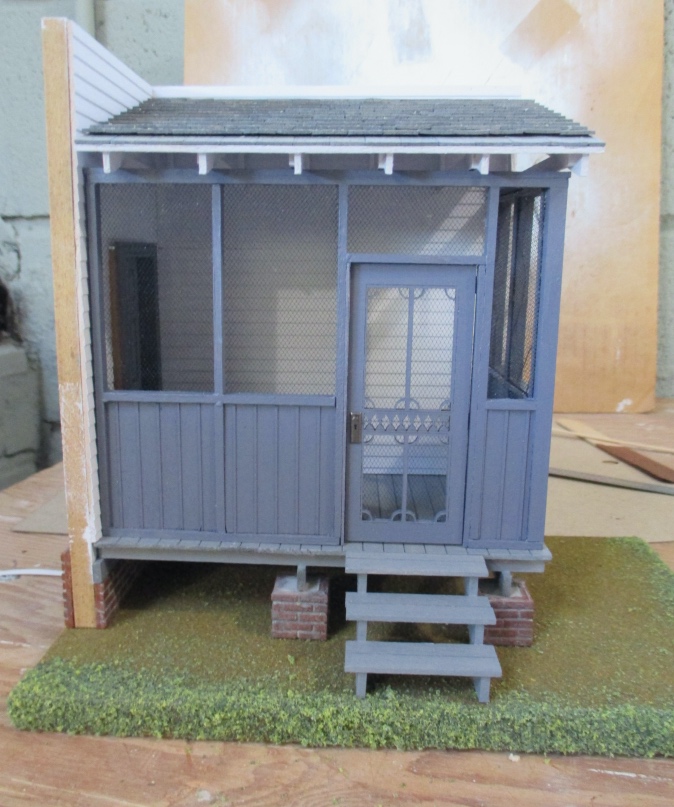 I’m not sure if you can tell from the pictures, but the screen is very loose. I wish I’d pulled it tighter when I was gluing it in, but it was so hard to work with. It’ll stay put, but it looks sloppy to me. 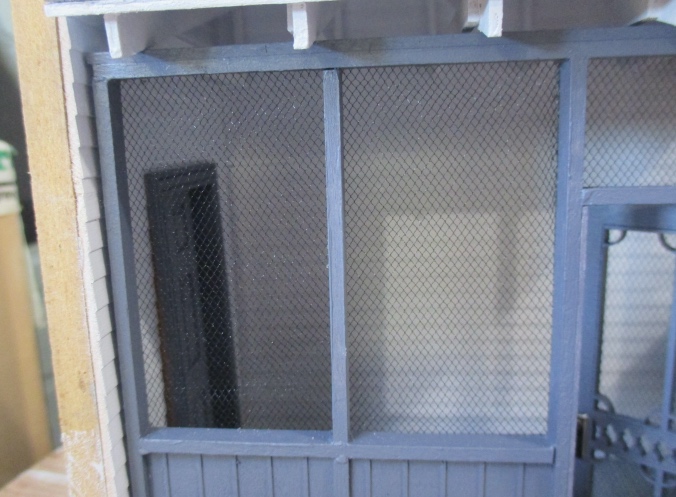 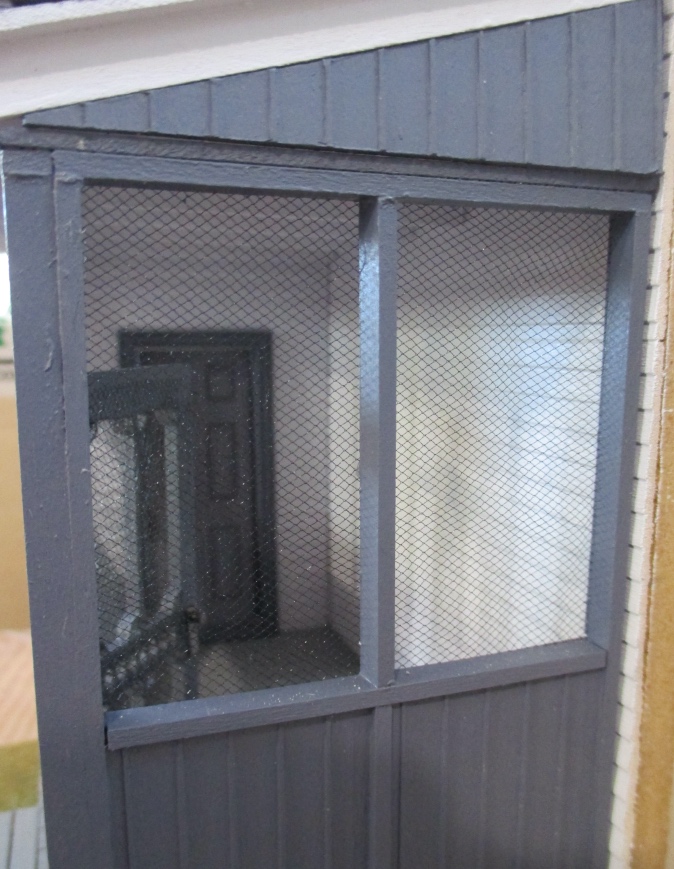 One thing that did go right is that I finished shingling, and you can’t even tell that the last rows of shingles are from a different batch. 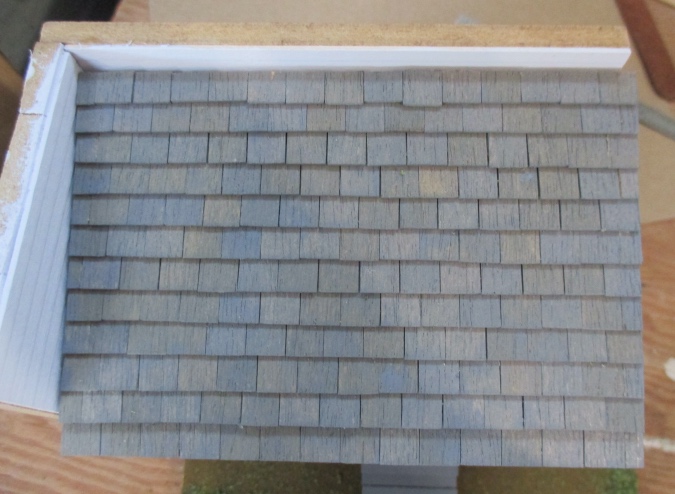 So that’s a wrap on the hinges and screens. It looks okay. I’m sure I’m my own worst critic. It was just one of those days. 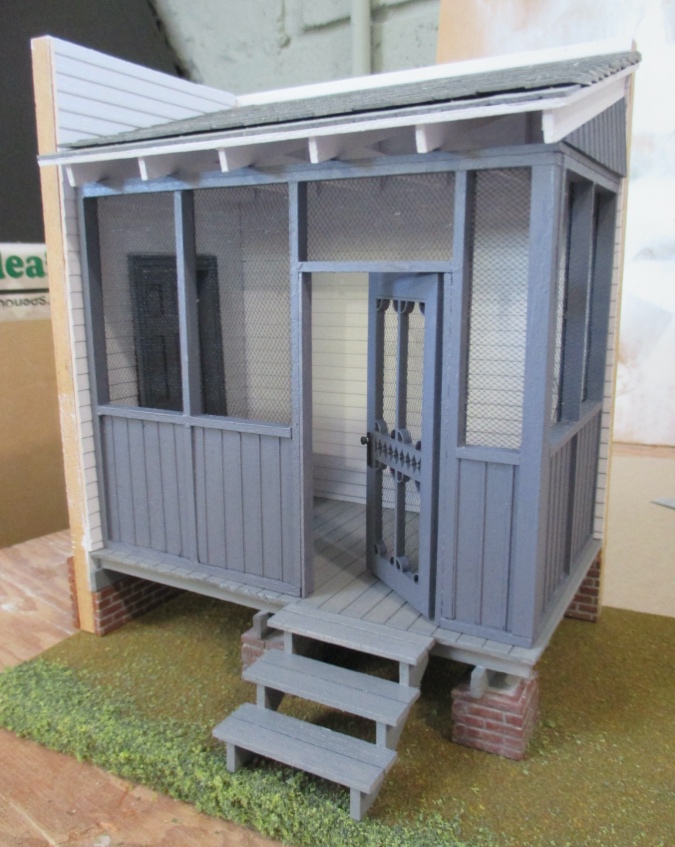