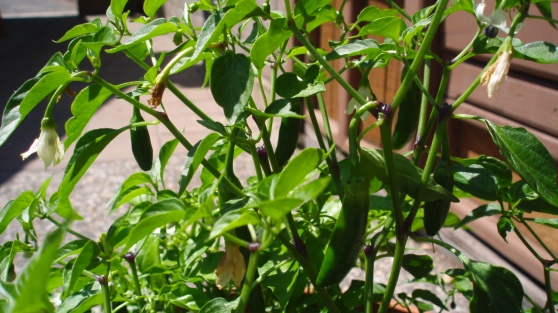 These are serrano peppers. I have a habanero plant in the same pot and found a few small pepper buds on that as well.

Just yesterday, Geoff commented that the pepper plant looked like it was wilting. I had noticed the same thing. The white flowers were turning brown and dropping off, the branches seemed to be sagging, and after 3+ months, the plants still weren’t producing any peppers.

Or so we thought. This morning when I was watering them, I went to pick a dead flower off a leaf and was astonished to realize what what I thought was a leaf was actually a huge green pepper hanging from the stem. This baby is big; it must have been there for several days, at least. I can’t believe I missed it.

I gave a closer look and realized the plant is full of peppers. I counted at least ten. The pepper plant isn’t dying, it’s finally growing! (The only downside to the discovery was that in my excitement I put my hands all over the peppers, and now they sting. Oops.)

The tomatoes are still doing well. The branches got so heavy I had to prop some of them up with sticks. The herbs are pretty much gone, even the parsley. Maybe this isn’t a good climate for herbs, or maybe I didn’t give them the care they needed. I’d like to pull them out and plant some berries in that pot but I’m not sure if it’s too late in the season… 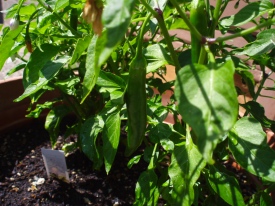 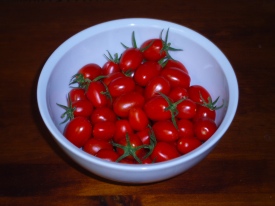 Left to right: the first pepper I spotted (it’s huge!); this morning’s harvest

When is a hutch not a hutch?

Public Relations in Games: The Science of Secrets