Less than a week until Christmas — time to finish those kitchen cabinets! I made a countertop from two pieces of basswood. 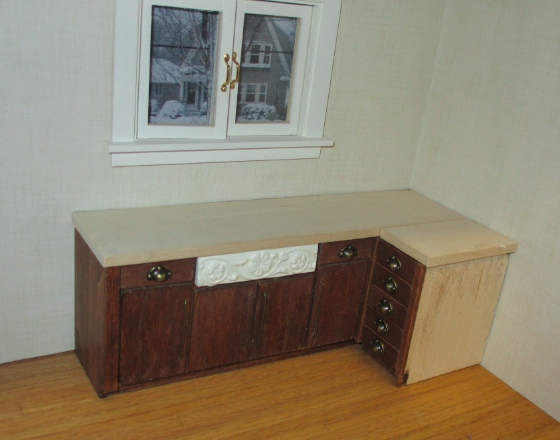 I used a utility knife to cut a rough hole for the sink. 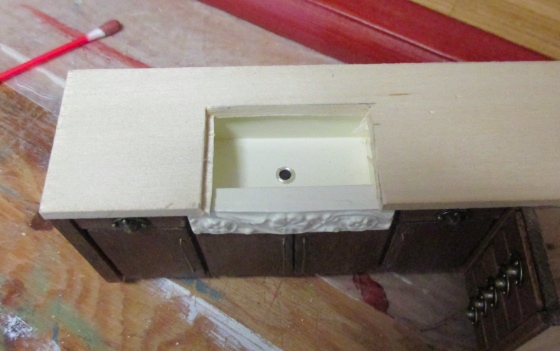 Then I enlarged this carefully until it was just larger than the sink. A tad too large, actually, but once the countertop is finished those cracks between the sink sides and the edges of the countertop are hardly visible. 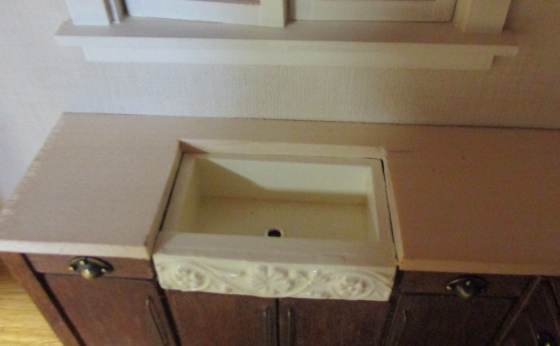 Next I glued the two pieces together, but not onto the cabinets yet. 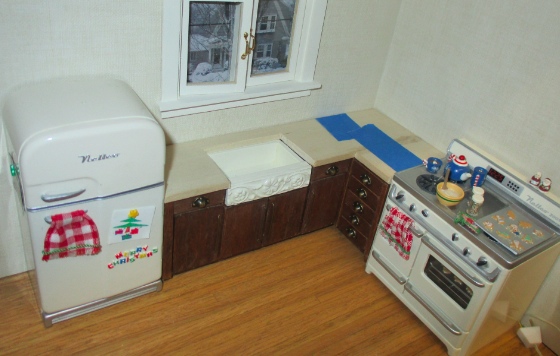 When the glue was dry, I sanded the top (especially the seam where the two pieces meet) and rounded the edges a bit. 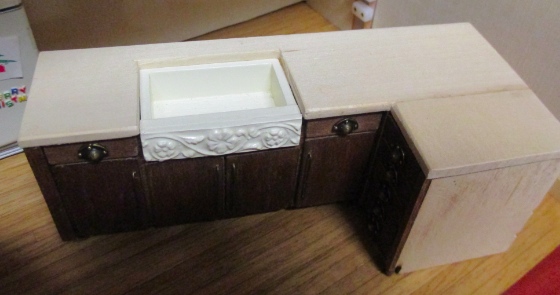 I painted it with a base coat of Christmas-y green. 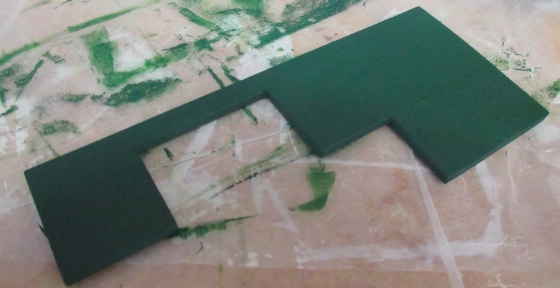 Then I used a dry brush with black and various shades of green for a granite effect. The process is described in more detail here. 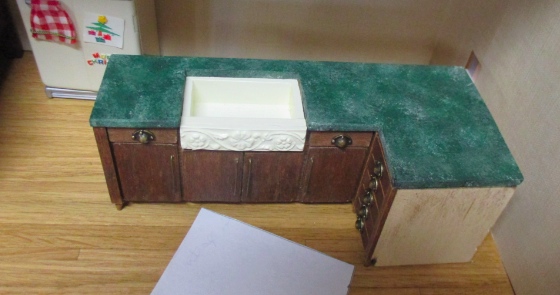 Once the paint dried I coated the countertop with gloss varnish, and once that was dry I glued it to the cabinets. Shakespeare comes in handy again! 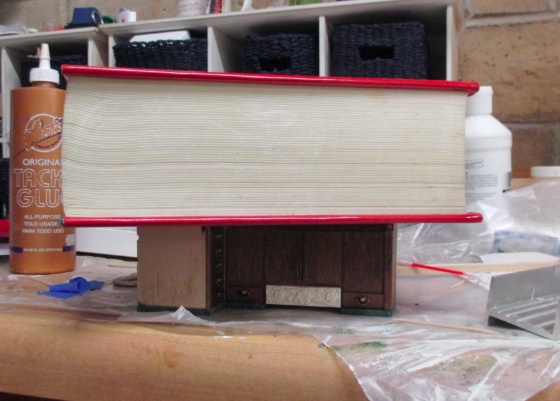 Next up: a kitchen island. I ordered a gingerbread prep table off Etsy and asked the seller not to glue on the items, just in case the table didn’t work with my layout. It’s a good thing, because the table is way too big. 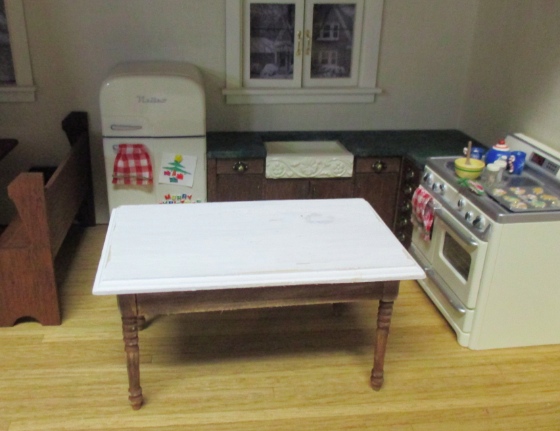 I decided to build a smaller island with a butcher block top like the one I made for my half scale Rosedale. I wanted chunky legs and a shelf underneath similar to this, but the dollhouse store only had thin newel posts in stock and I didn’t want to wait. So, no shelf. 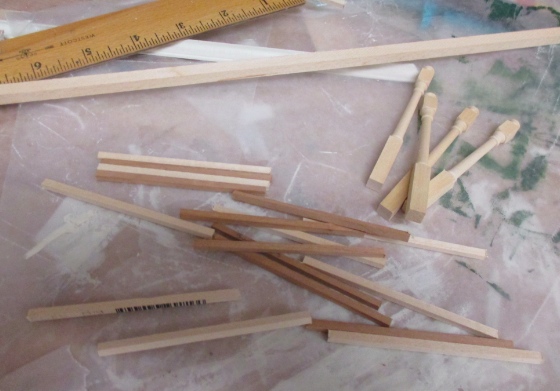 The slats for the butcher block are 1/8″ square, basswood and cherry. I cut them into lengths of about 3″, not being too meticulous about it since they’ll be sanded later, and glued them together. 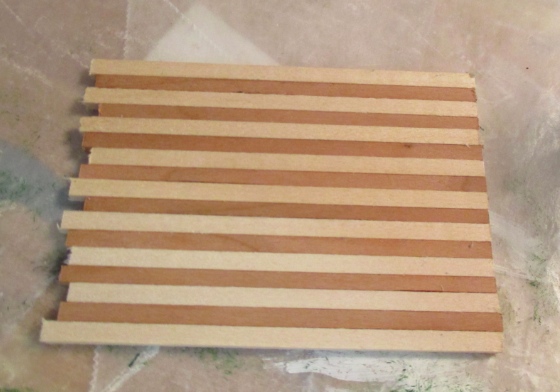 Once the glue dried, I sanded both sides with the drum sander to make them level, and then went over the whole thing with sandpaper to even out the top and used an emery board to round the edges. I then used Minwax finishing wax to give it a nice luster. 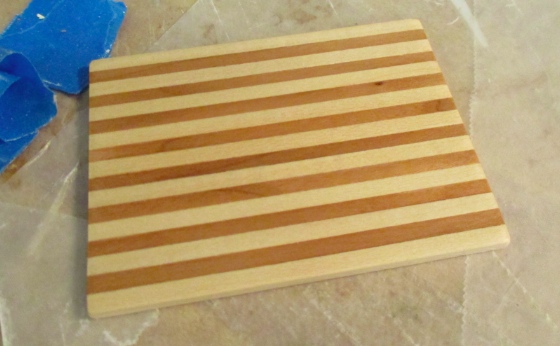 Here’s my initial try. The height is the same as the cabinets and I like the shape of the legs in general, but the table looked too tall and skinny to me. 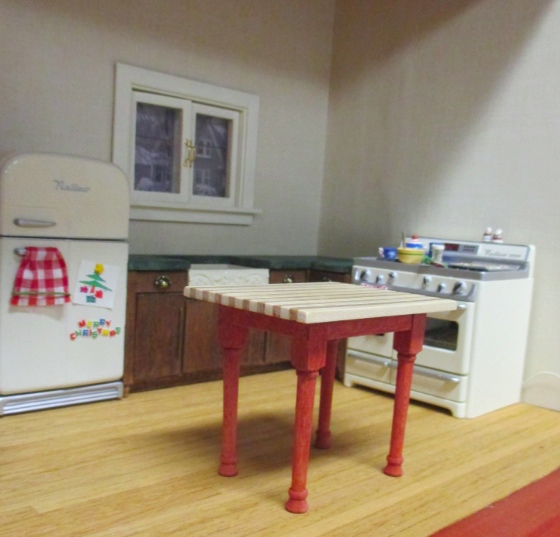 I used 1/4″ square basswood between the legs, and had some left over. I added another layer all the way around and now it looks much better proportioned. If I were doing it over I might put the legs closer to the edges of the butcher block — the 3/8″ overhang is maybe a little too much. 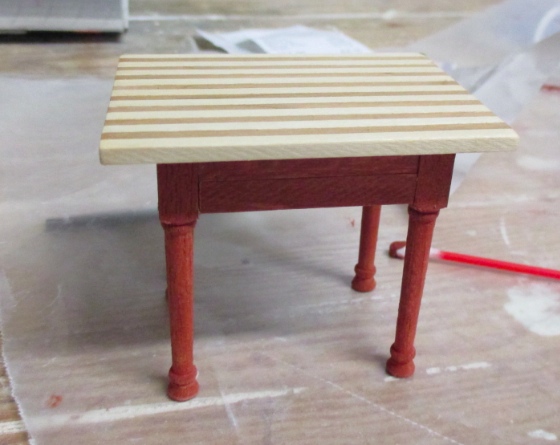 I spread out some of the gingerbread goodies to see how they’ll look. Yum. 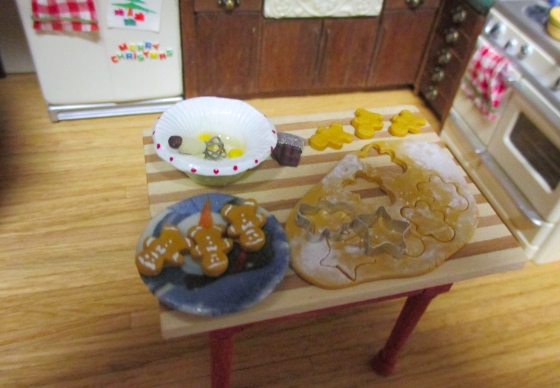 Added bonus: because the prep table came with more stuff than I can fit on my smaller island, I can spread it around the rest of the kitchen. (And, I’m sure I’ll find another use for the table at some point…) 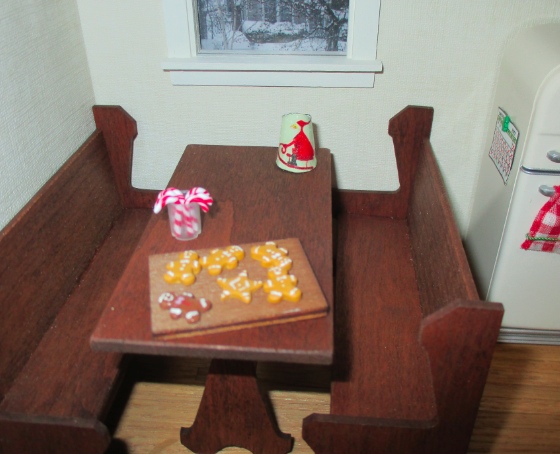 The last step to finishing the cabinets was to glue on the faucet. This is a Gooseneck Kitchen Faucet set. I initially had my eye on this one — I like that it has a separate sprayer — but the Gooseneck set looked more like the faucets I saw when I Googled photos of farmhouse sinks. So I was kind of regretting the purchase to begin with.

Then I didn’t notice until I glued on the pieces that the handles don’t match! One’s pointing up, the other’s pointing down. 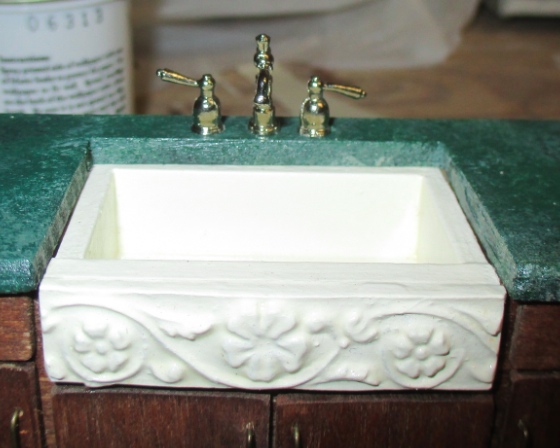 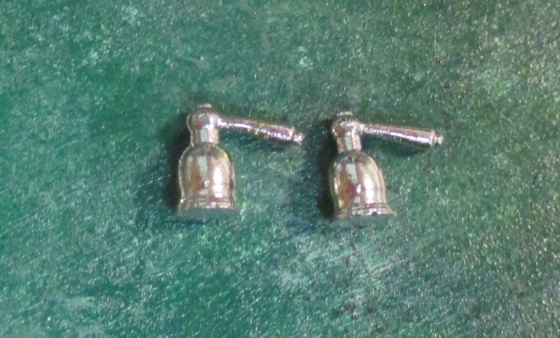 I glued them on with QuickGrip. It’ll do, but I still like the other faucet better. I should have trusted my instincts.

On the plus side, I love that view out the window! 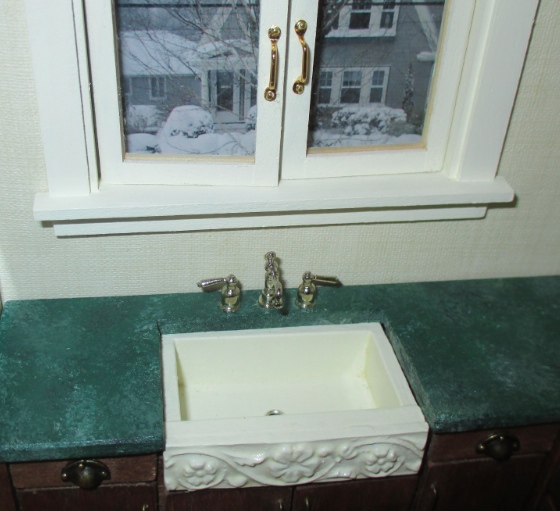 And here’s a final shot of the finished cabinets and island. I’m also planning to use this gingerbread house somewhere in the setting. I made it from Fimo almost 20 years ago — it’s held up surprisingly well! 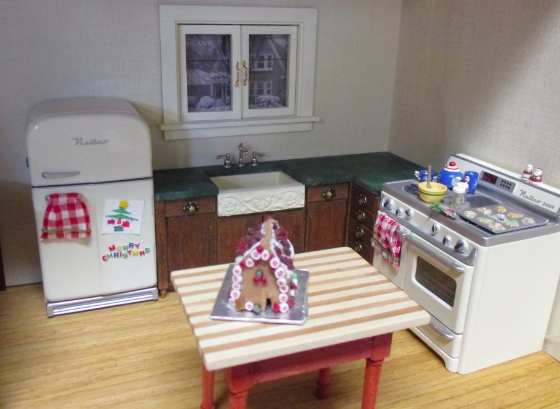