With my doors and windows picked out and my egg carton stoops and paths finished, the next step on the four seasons roombox was… well, everything. The four scenes are the same, so I set up all four of them at once. 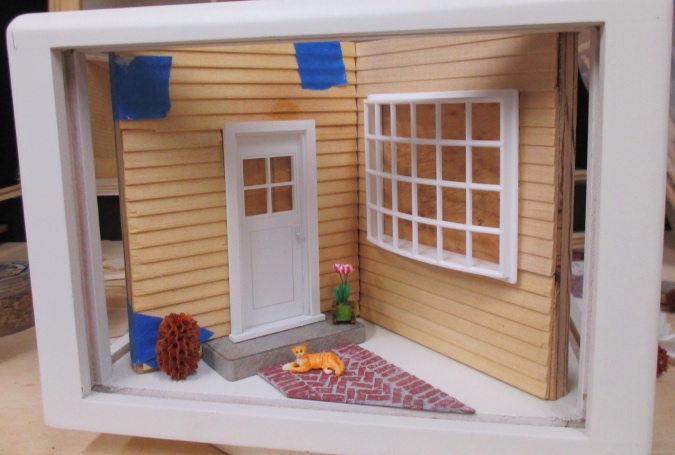 I recently got a really good deal on some old Houseworks siding — $5 each for two packages of 24″ long sheets — but I didn’t realize until I opened one that it’s noticeably lower quality than new Houseworks siding. I’m not sure if that’s due to years of poor storage or Houseworks using lower quality wood in the past (maybe both). This stuff is a lot rougher than the newer siding and it cracks and splits very easily.

To minimize splitting problems, I created the door and window openings by cutting smaller pieces of siding to go around the openings, rather than cutting a hole in a large piece. 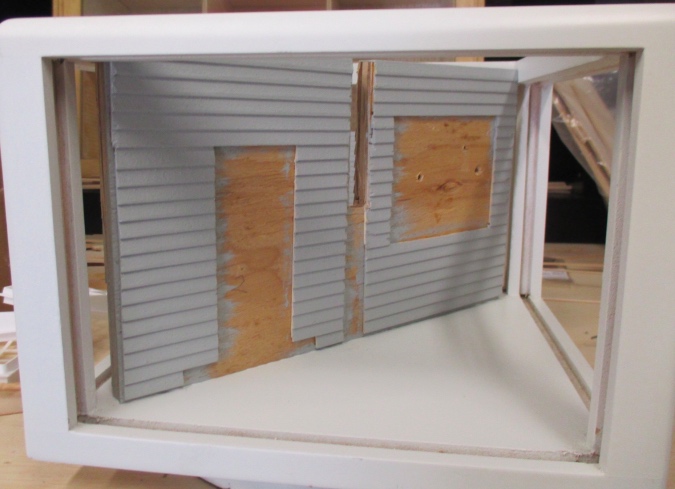 The plywood pieces weren’t glued together yet. I cut and attached all the siding, painted it, and then slid the pieces together inside the box. As I added siding to each section, it became harder to slide the plywood pieces into the box due to the added thickness at the edges. On the last few sections, I had to stop the siding about 1/16″ away from the edge so the fit wouldn’t be as tight. 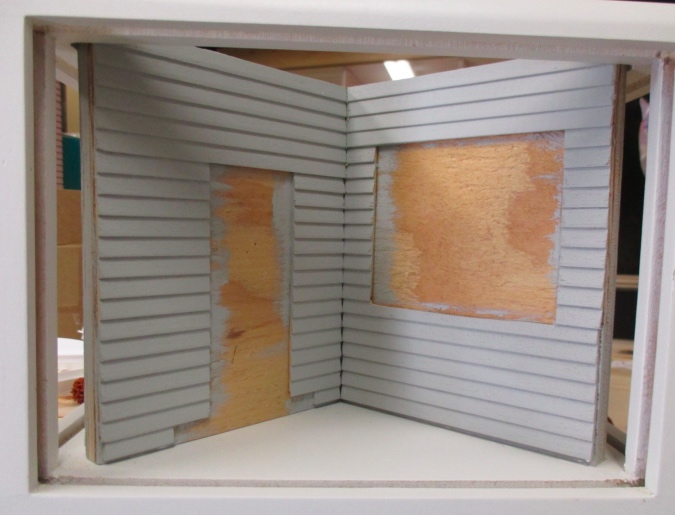 With the siding painted, I glued the walls into the box. I cut pieces of strip wood to cover up the exposed plywood edge at the top. 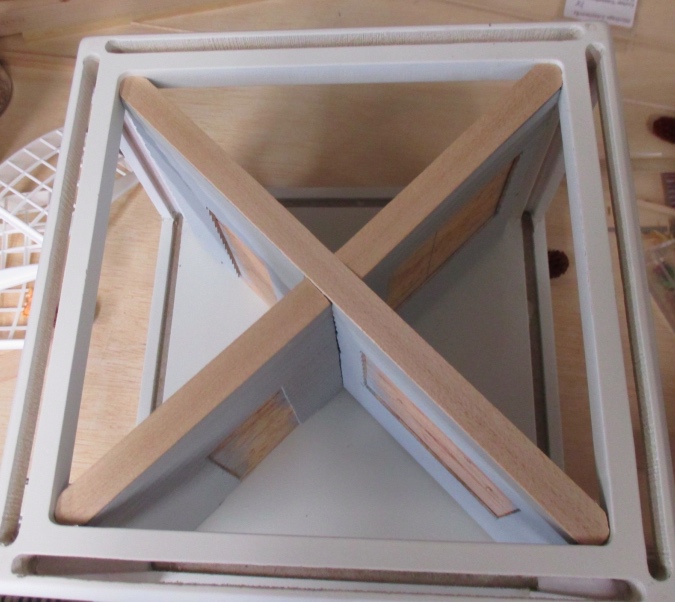 Next I added ground cover. For spring, I used a piece of Noch grass. I love this stuff — it’s lush and realistic (unlike the Lemax grass I got at Michaels a few years ago, which sheds all over the place). 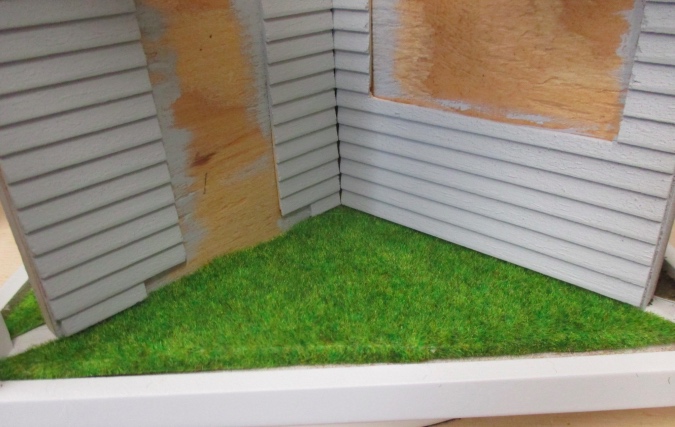 For summer, I used the same grass but splotched on some brown and yellow paint with a dry brush to look like patches of dead grass. 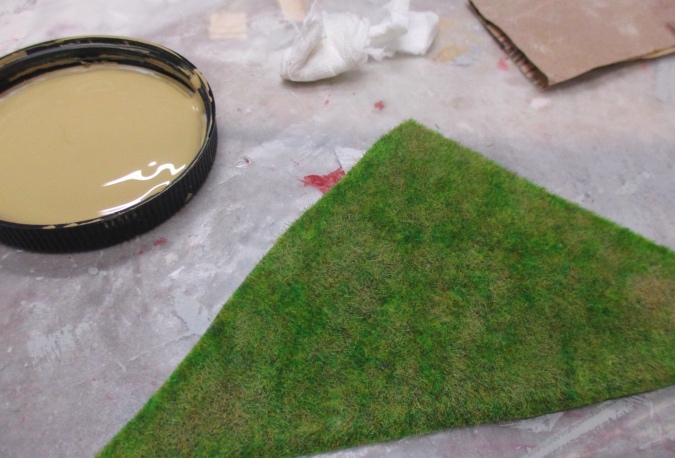 Here’s a side by side comparison. 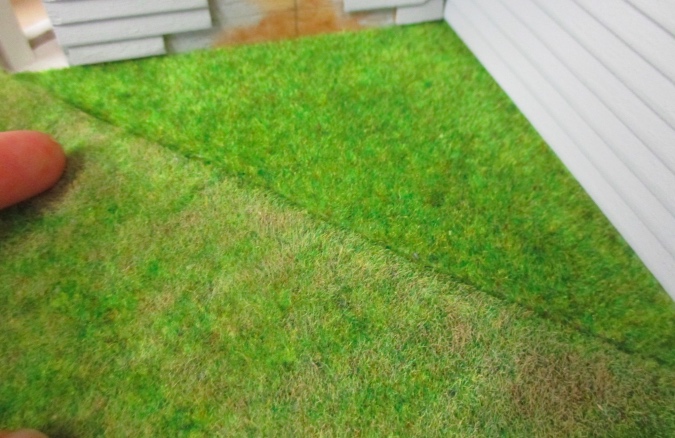 For autumn, I used a Scene-A-Rama vinyl grass mat from the hobby shop. This is actually called “summer grass” but it looked more fall-like to me, especially since there’s no grass sticking up — it has a texture like sandpaper. I’m planning to add fallen leaves to this scene so I really just needed something that was the right color, to cover up the ground. 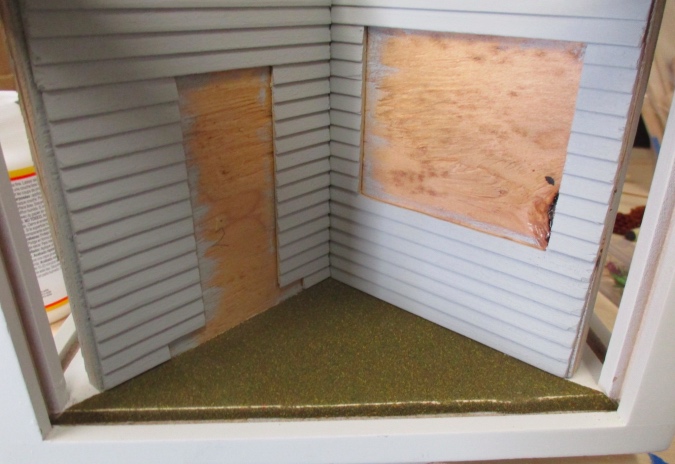 Scoring and folding over the edge left a very visible white stripe. I tried covering this up with some stuff I had from other landscaping projects — crumb grass was much too green and coffee ground “dirt” was much too brown. Then I got the idea to cut open a few tea bags and see what the insides looked like. Black tea was too black and chamomile was too yellow, but this berry flavored green tea was just right. (Except for those white flecks, which I picked out.) 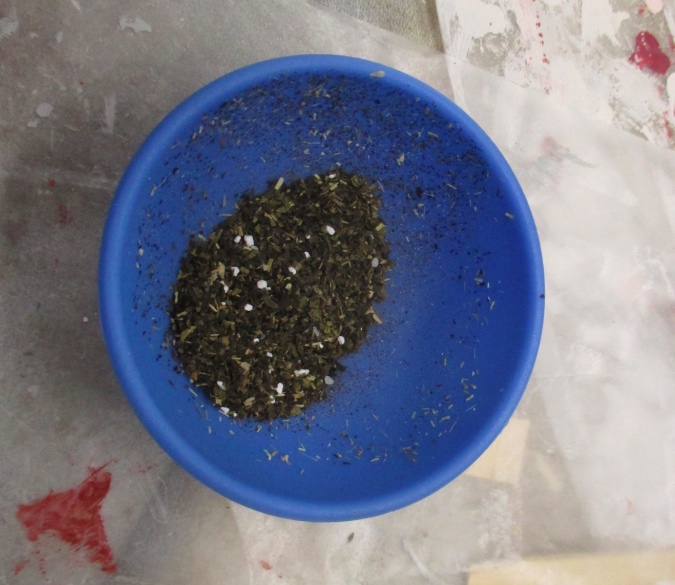 I glued tea particles over the white stripe, and also spread some around on the ground. Now my roombox smells like berries! 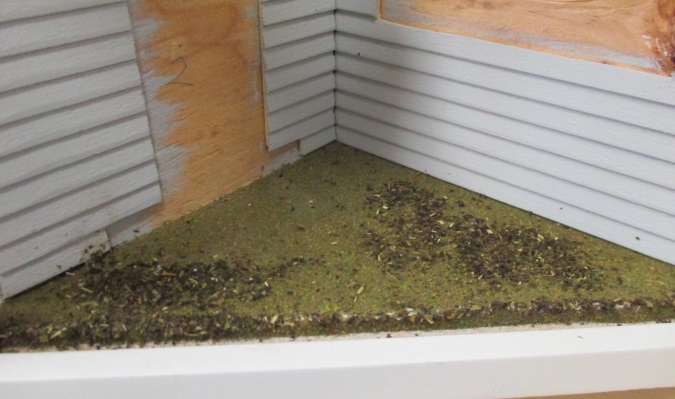 Here’s a birds-eye view of the four scenes. Winter will be covered with snow, so for now I just left the white base. 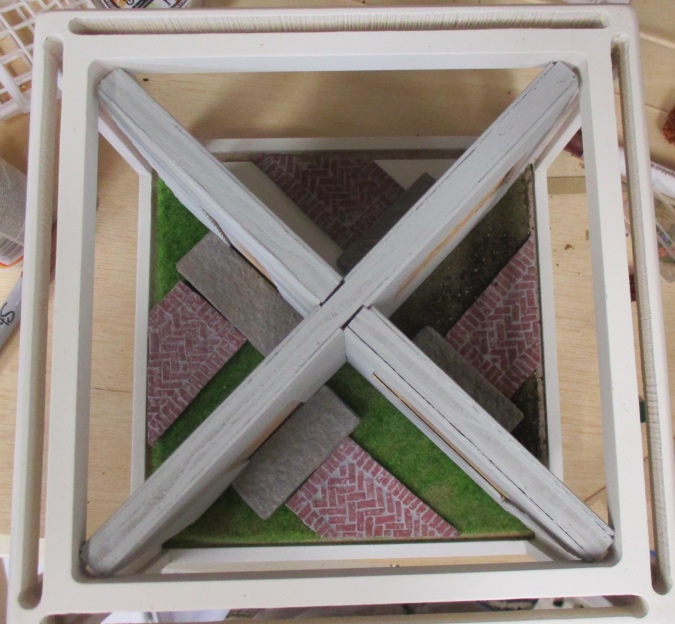 Next I painted the doors. These are resin and came lightly airbrushed with primer. I masked off the trim and painted the doors Brick Red. It took many coats to get good coverage — the doors below, from left to right, have one coat, two coats, and three coats. Even three wasn’t enough and I didn’t like the visible brush strokes, so I switched to a foam brush (and still had to do 2-3 more coats). 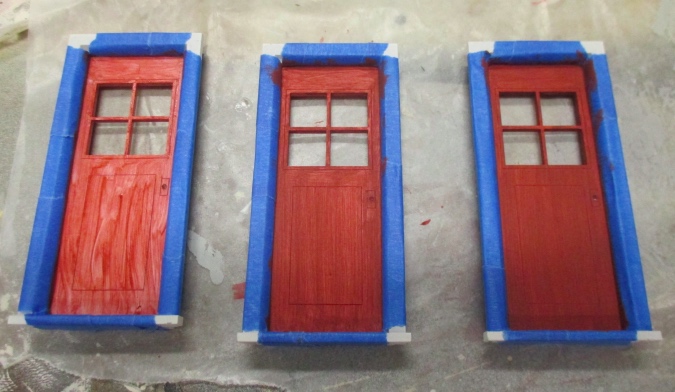 The tape did a good job keeping red paint off the trim, but as you can see below, the edges weren’t sharp like I’d hoped. Using a chisel brush I painted the trim white, then went back and painted red over the white spots I got on the door, then went back and painted over red spots I’d gotten on the trim, and so on. The finished doors are far from perfect, but after several rounds of this I called it good enough. 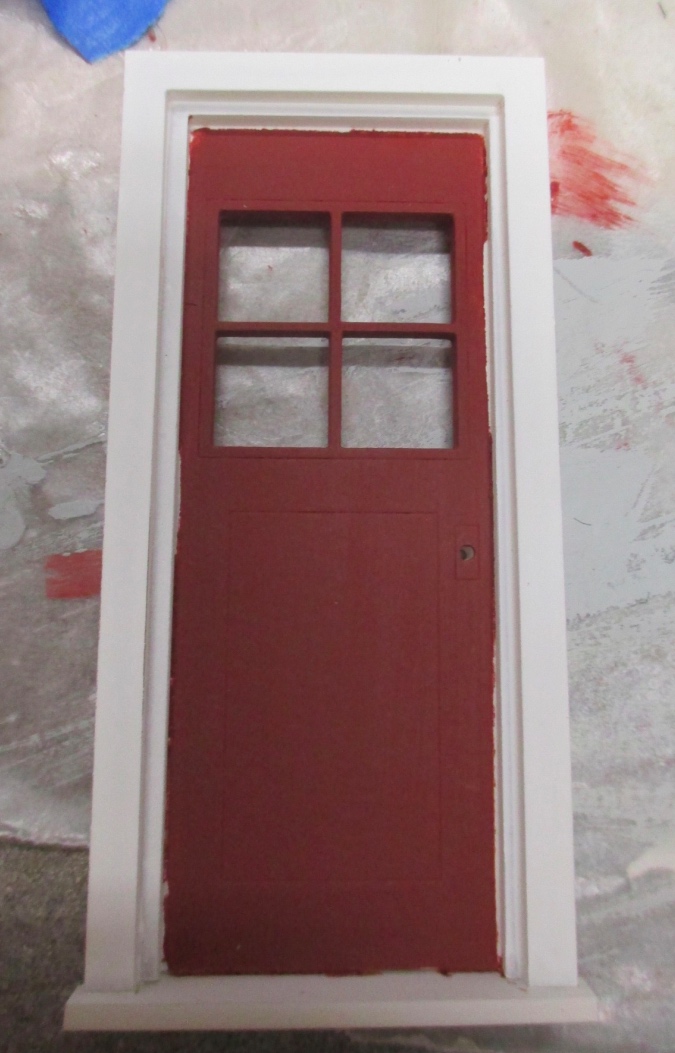 Since I couldn’t cut holes into the walls, the doors stick out quite a bit. I added strip wood around the edge to compensate. 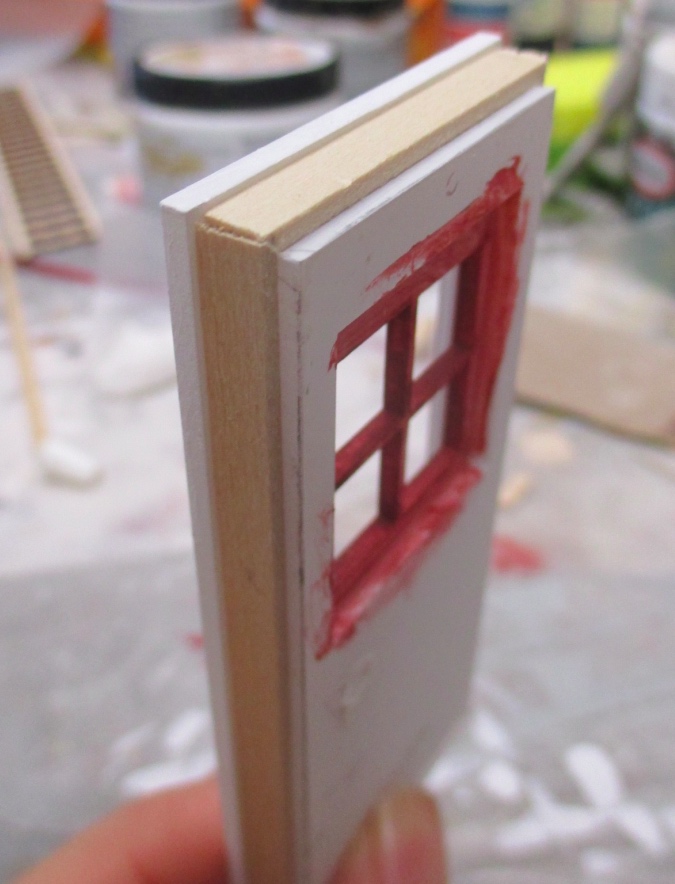 I added a little piece at the bottom, too, to continue the edge of the threshold all the way back. 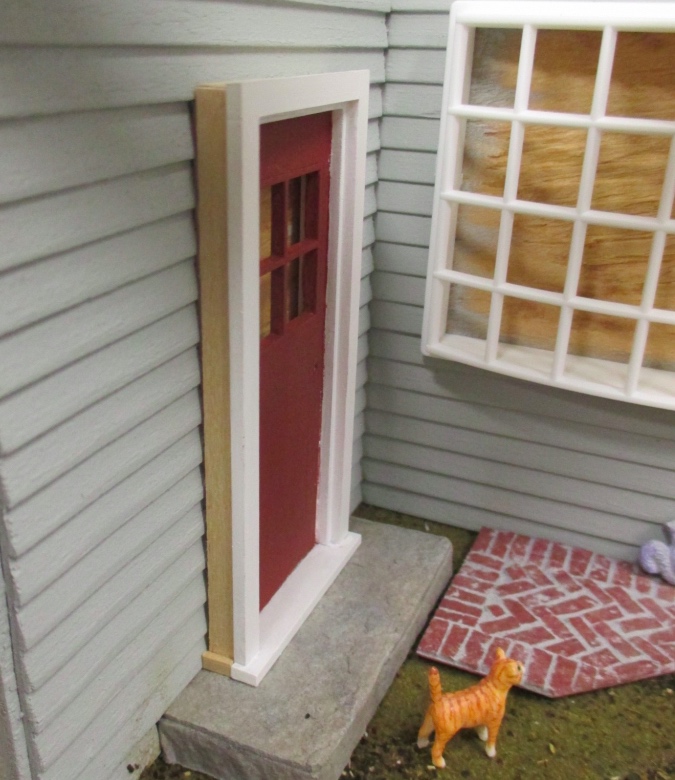 While the paint on the trim was drying, I added peach scrapbook paper to the window areas. I’d wanted to add pictures that would give the illusion of what’s beyond the window, like in my breadbox roombox, but it seemed too close up to be realistic. 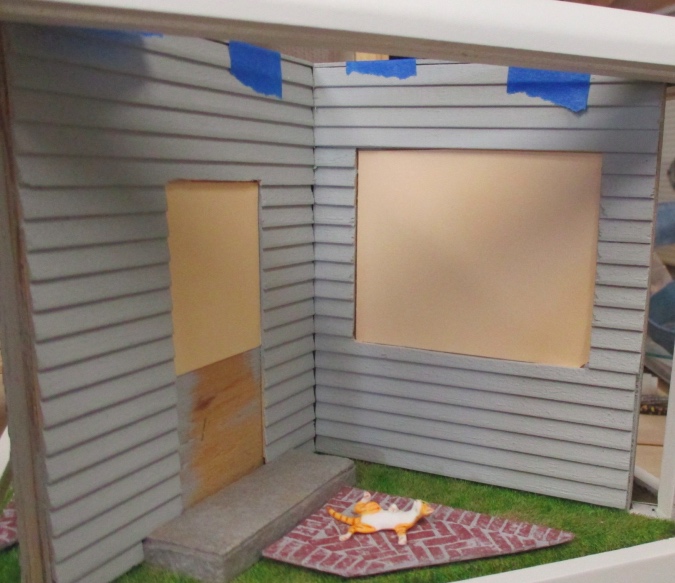 The peach paper goes well with the gray paint, and I think it sort of looks like light coming through the windows. Some of the doors will have wreaths over the windows, and each bowed window will have items on the sill and curtains, so the paper won’t be too much of a focal point. 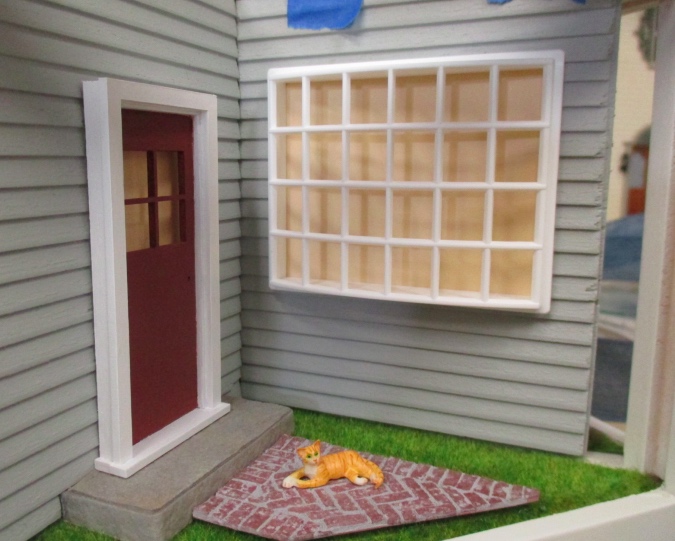 Back to the doors. These originally had knobs made from small white nails, which I pulled out before painting. I took advantage of the holes to add brads (which I’ve used before as half scale doorknobs in the Victorianna and the Artist’s Cottage). 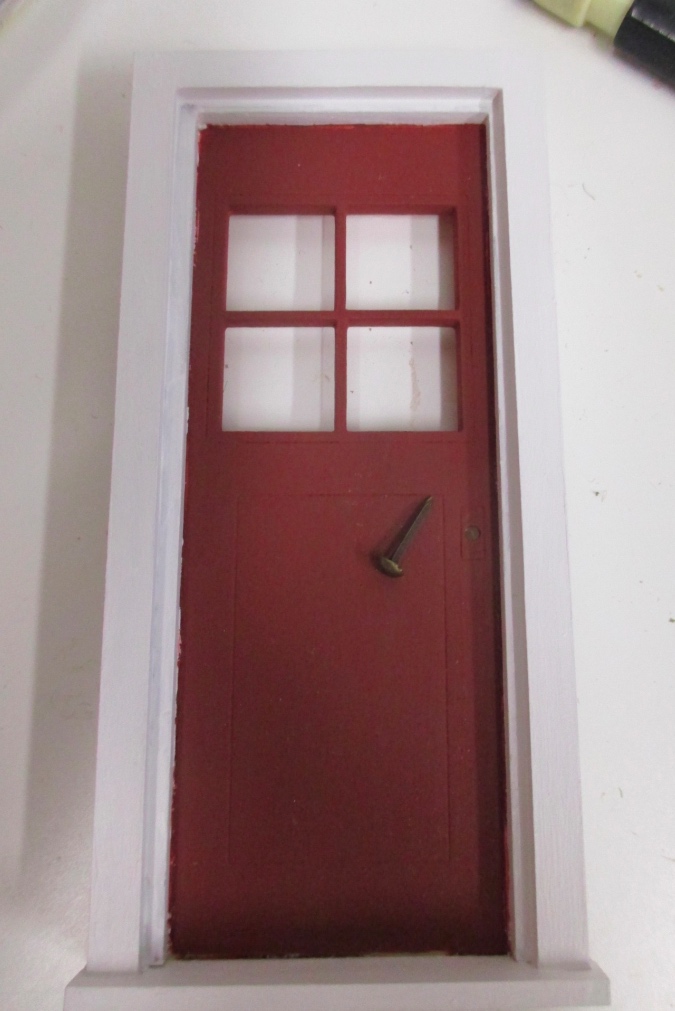 Usually I cut down the legs, but in this case it was easy to push the legs through the hole. 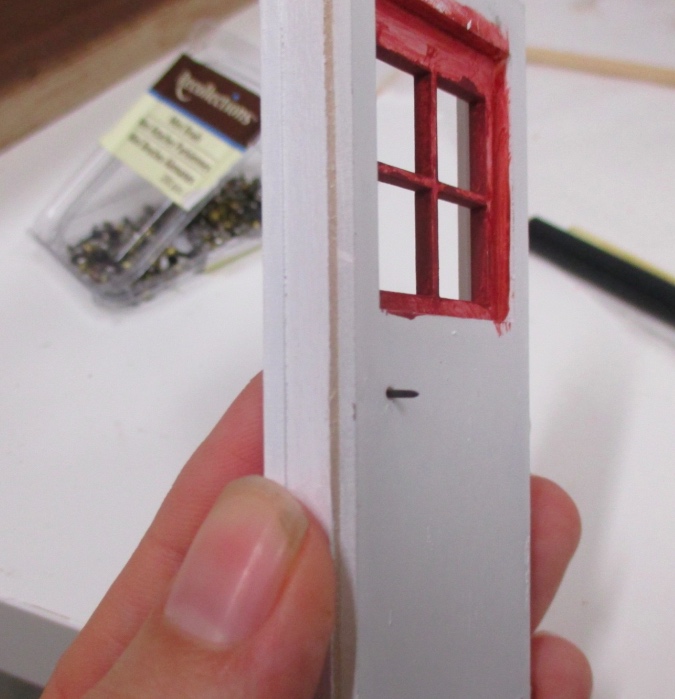 I folded down the edges so the brad can’t slip back out. 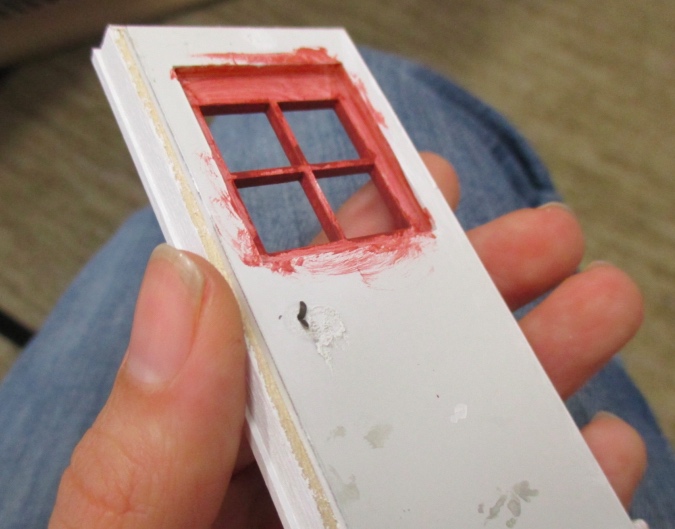 I sprayed the doors with Krylon matte sealer to protect the finish (before that, it was scratching pretty easily). Then I glued in the stoops, paths, and doors. The doors came with glass inserts for the windows, which I used even though I’m not planning to add glass to the bow windows. 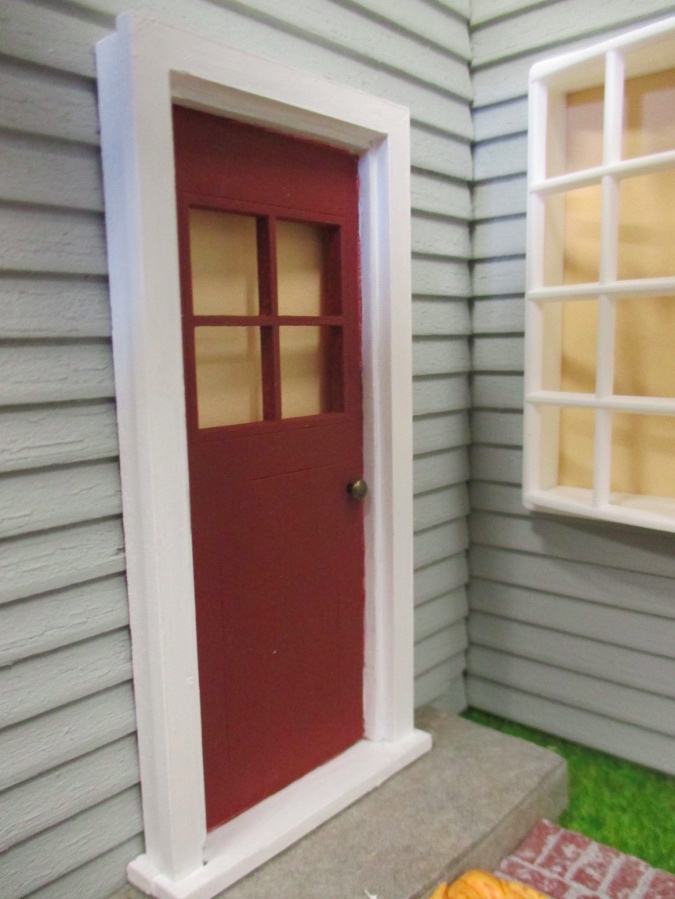 Next I added quarter round to the corners, to cover up the gaps where the siding edges meet. 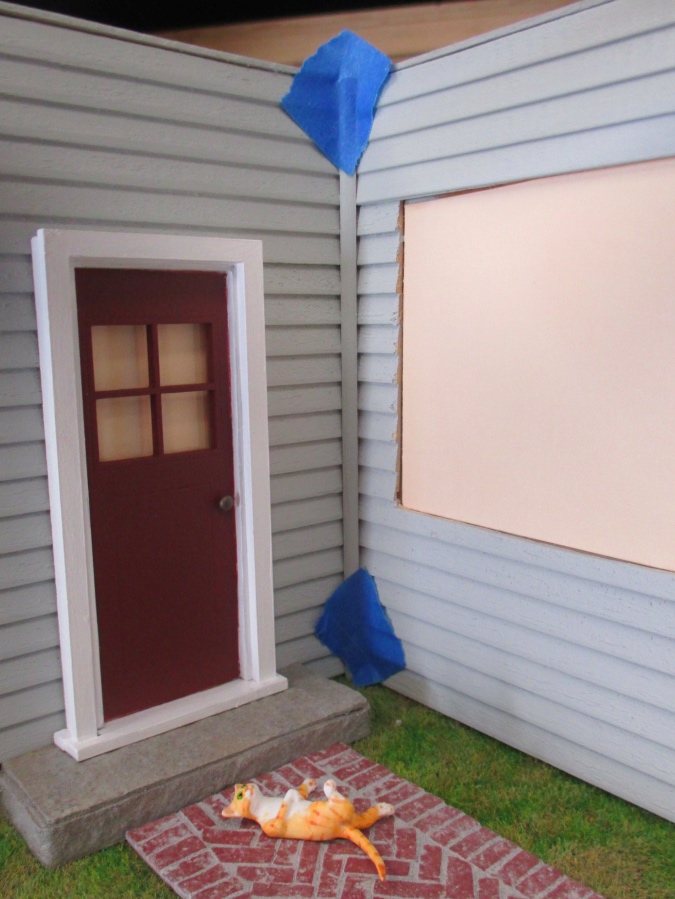 Finally, I cut basswood pieces to cover up the gaps at the edges of each piece of plywood. Due to the trim around the top of the box, these gaps had to be there for the plywood pieces to slide in. I used 3/32″ x 3/4″ strip wood, cut down to 5/8″ so it would be just the same width as the white trim at the top. (I would have used 5/8″ strip wood to begin with but it doesn’t come in that size…) 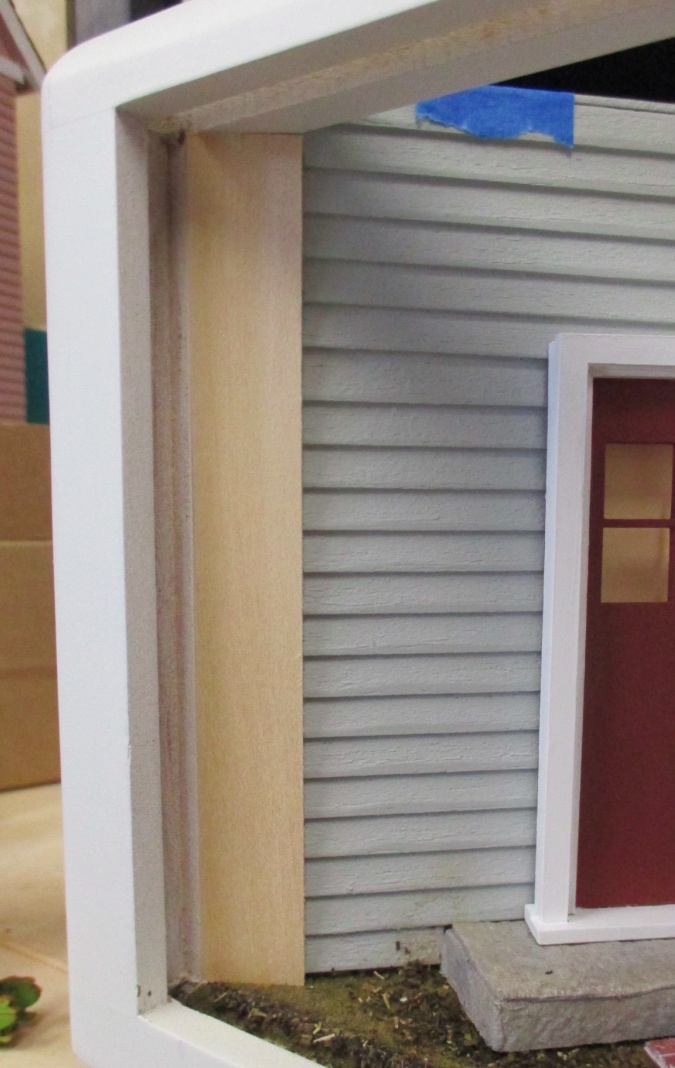 On the edges where I’d left the siding a little short so I could slide in the pieces, I first added a small strip to fill up that gap. 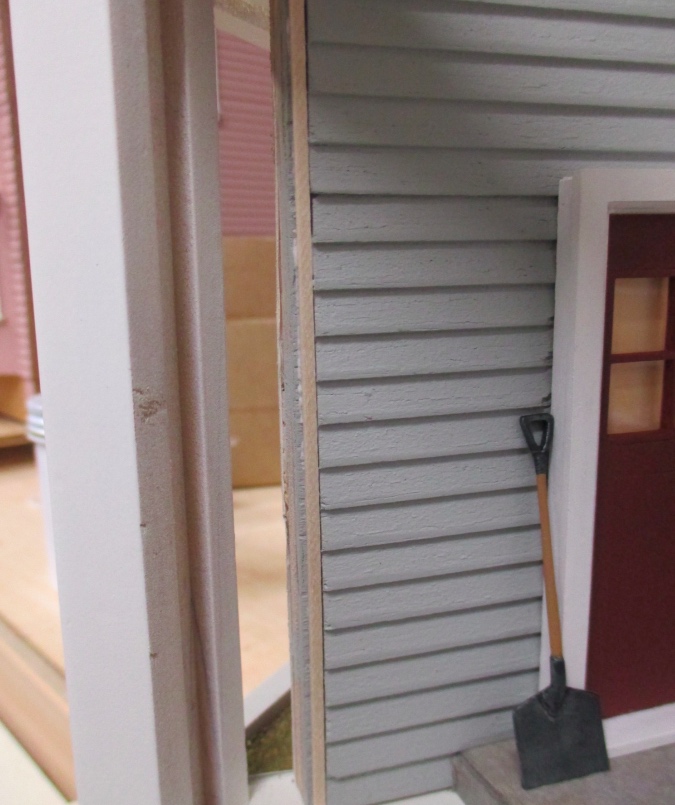 Then I glued in the trim pieces. These were tricky because there’s not much for them to grab on to on either edge. They’re wedged in pretty tight at the top and bottom, so I hope they’ll stay put. 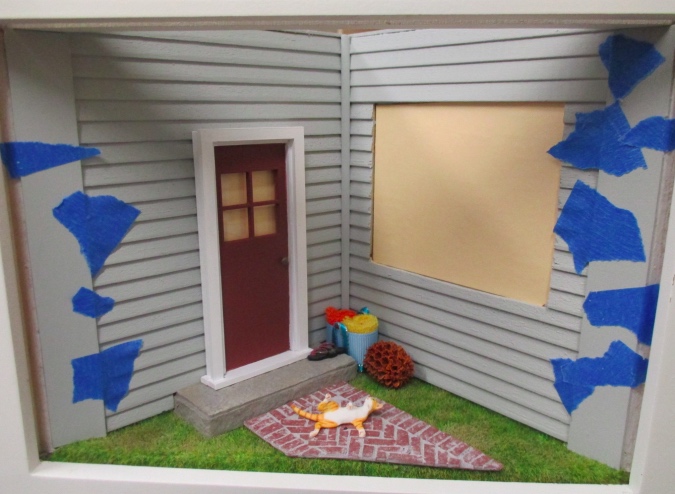 Now the scenes are set up and I can move on to the fun stuff! Here they are ready for decorating. 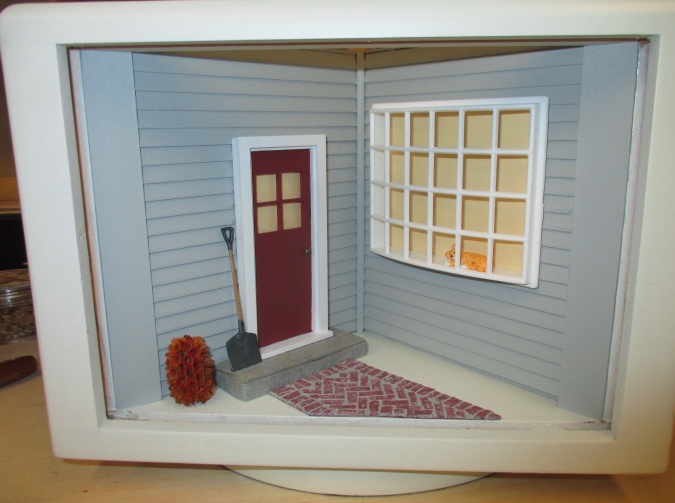 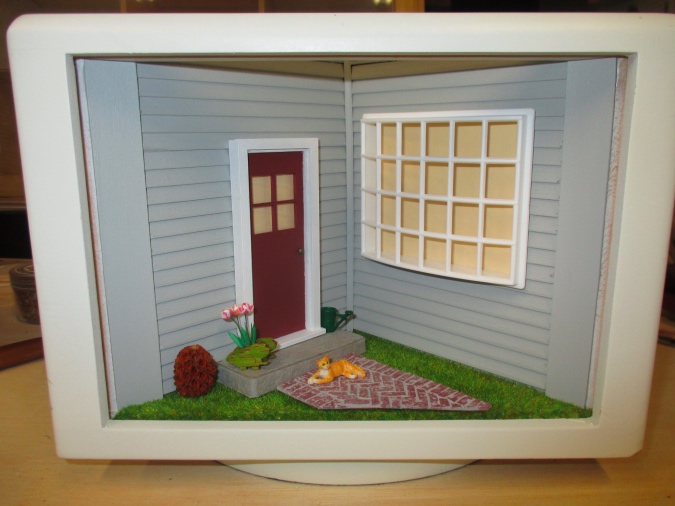 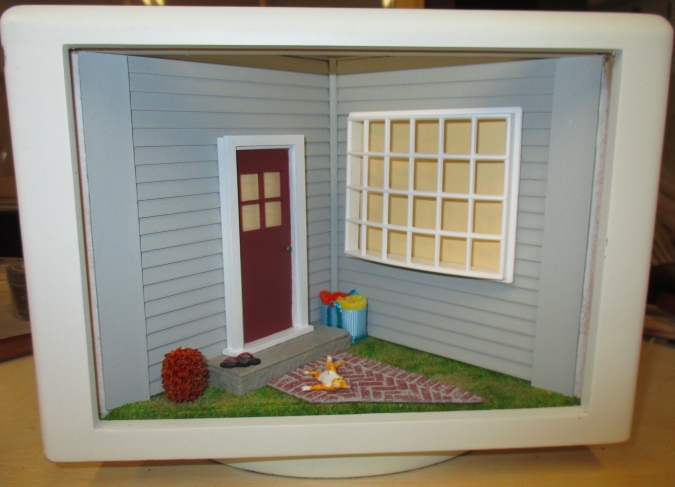 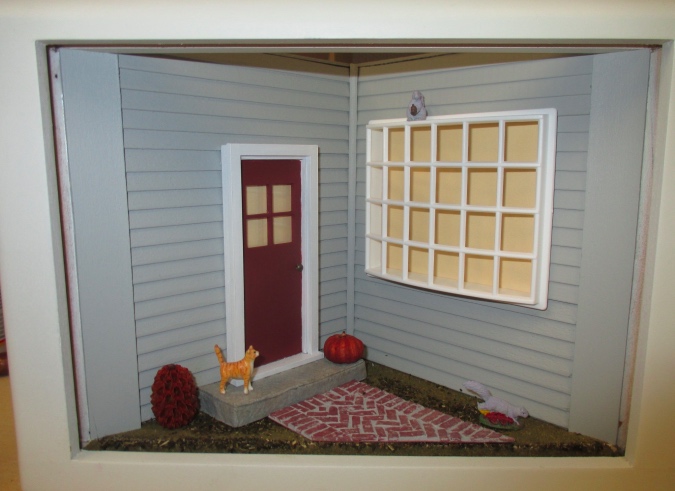