The bar interior is on hold until I have everything I need to do the electricity, so I moved on to the outside. A while ago I got some Magic Brick and Magic Slate for a good price. (I mostly do half scale projects, so part of the fun of doing a 1:12 roombox is using up all these supplies I’ve picked up on the cheap!) I decided to use the Magic Slate for the bar’s patio and the brick on the exterior walls.

The patio walls have pegs at the bottom that fit into pre-drilled holes in the patio. These walls need to be glued to the patio, and then that assembly gets glued to the front facade of the bar. 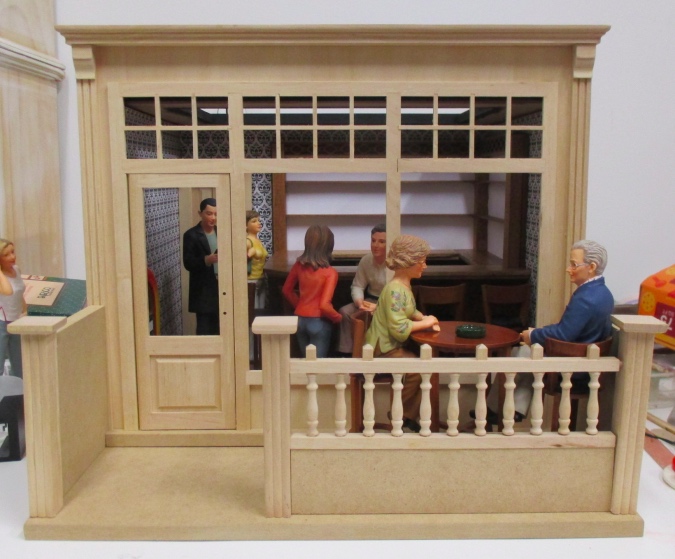 First I needed to take care of a problem with the walls not quite fitting. I think the holes that the patio walls fit into were slightly off, which prevented these two walls from meeting squarely. 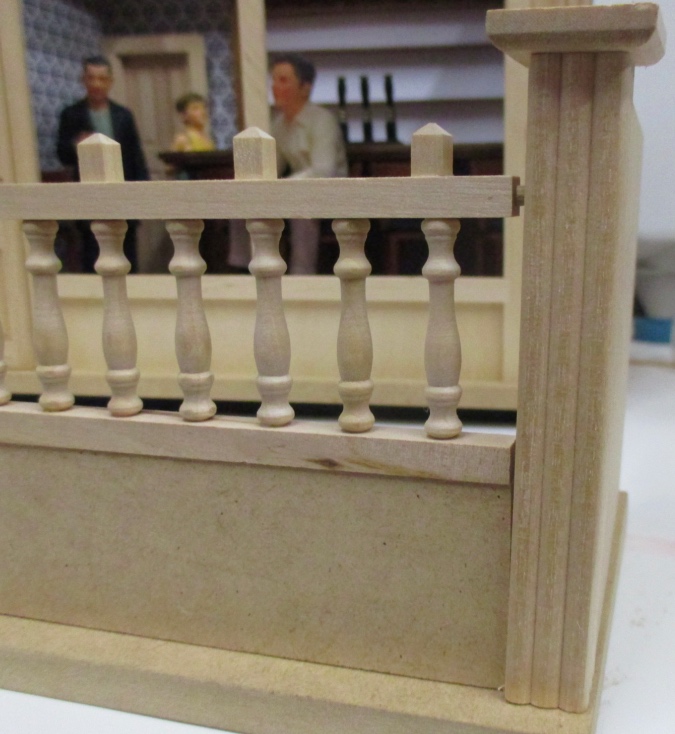 To fix this, I drilled into the hole with a drill bit the next size up, so there’s a little bit of slop when the peg fits into the hole. This fixed the problem with the top peg. 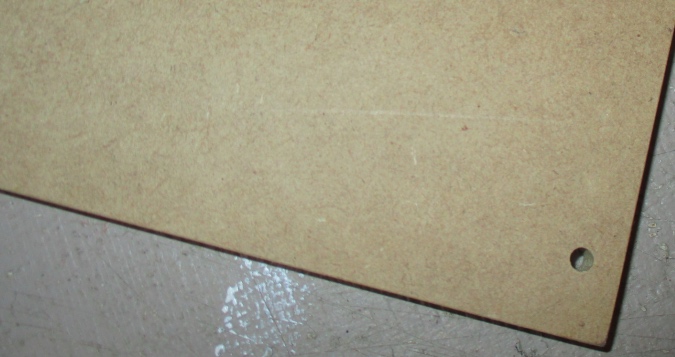 Magic Slate and Magic Brick come with mortar line templates that you lay down over the surface. Then you coat the surface with a stucco-like material and pull up the template, which leaves behind a slate or brick pattern in the stucco. I painted the patio floor gray — this will be the mortar color between the slate pavers. (I also painted the front of the bar. None of this is glued together yet.) 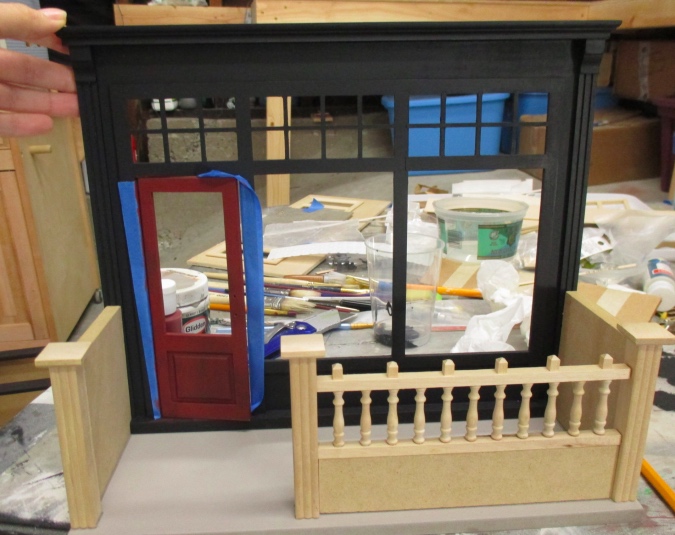 I drew around the walls so I’d know where they go. I don’t want to get any of the slate material in these areas.

I covered these areas with masking tape.

Next I lay down the Magic Slate template. 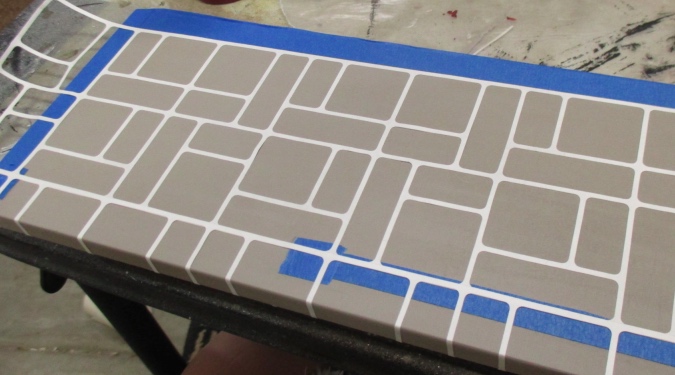 This is what the slate material looks like when it’s wet. It comes as a powder and you mix in water to make it the consistency of cake frosting. 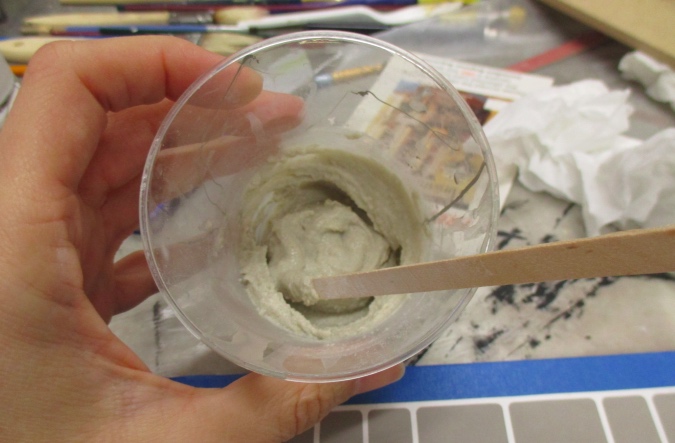 I smeared on the stone material with a sponge brush.

Here it is with the template and masking tape pulled up. You’re only supposed to wait five minutes, so it was still pretty wet. I left it to dry overnight. 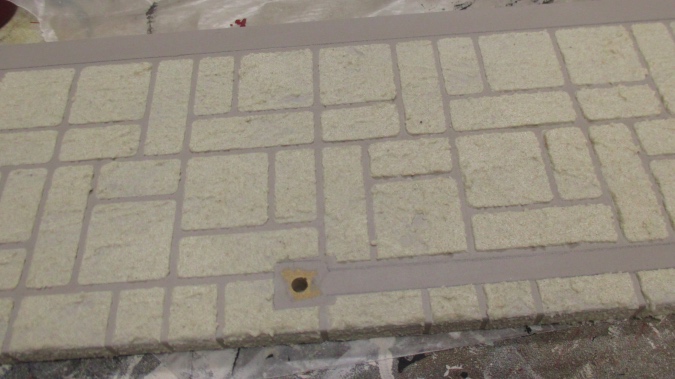 Pretty cool! Usually I do egg carton stone, but cutting pieces to these sizes and laying them out like this would take a lot of work. This was very quick and I like that it has a pattern, but the color obviously needs help. 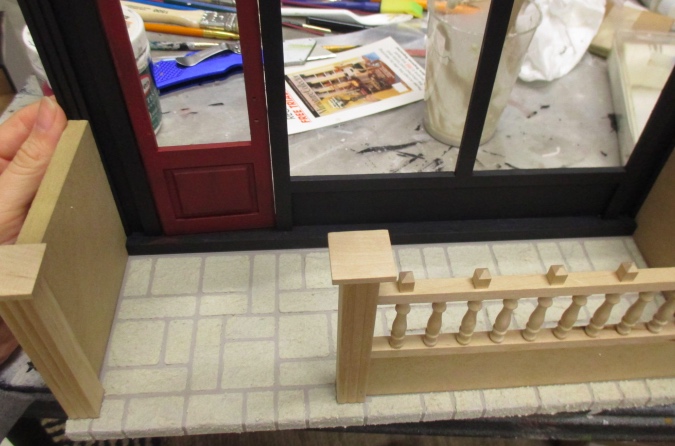 I needed to paint over the pencil lines and wanted to give the stone a gray base, so I painted over the whole thing with another coat of the gray I’d used for the mortar color. 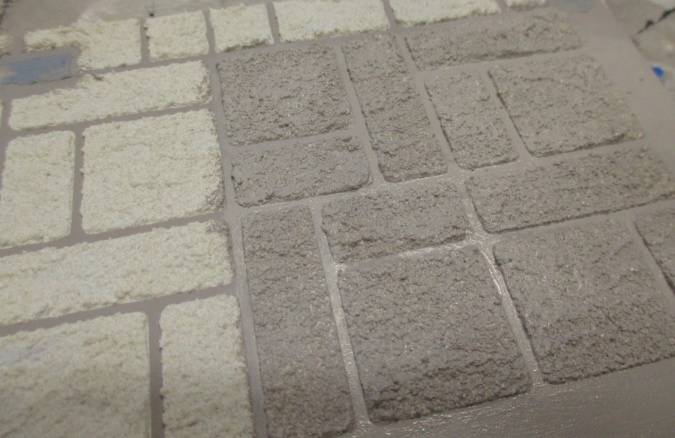 Then I used washes (watered down paint) to add color to individual stones. In spite of two of these paint colors having the word “slate” in their names, this sort of looks like a sidewalk you’d find in Candy Land. 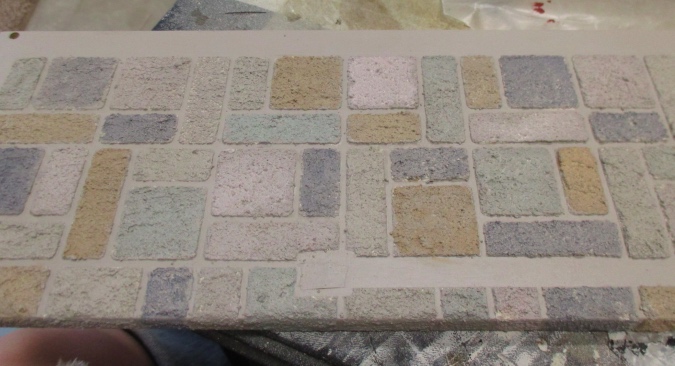 I used a dry brush to fleck gray onto all the stones. Now it looks kind of fuzzy. I just wasn’t happy with how it was turning out. 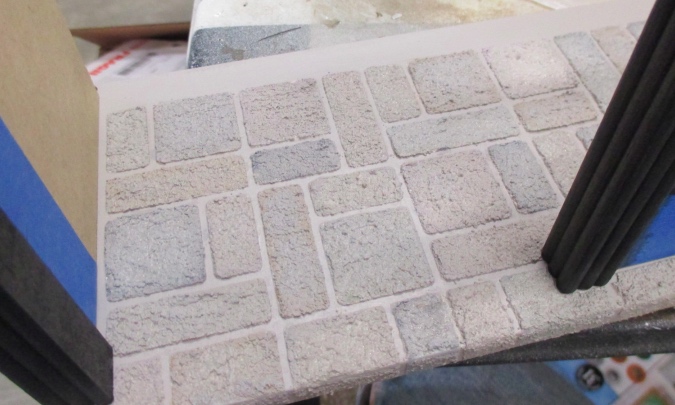 Part of what was bugging me was how the stones are raised up over the mortar lines — real stones would be flush with the mortar. I worried that adding mortar to this would cause the stones to totally get lost but decided to try it. What could go wrong?

First I sealed the stones with matte sealer to protect them. Even though the stone material was dry when I started adding color, the washes I used on them had already loosened the stone material somewhat and some of it was lifting off. I didn’t want that to get worse when it came time to wash off the excess mortar with water. 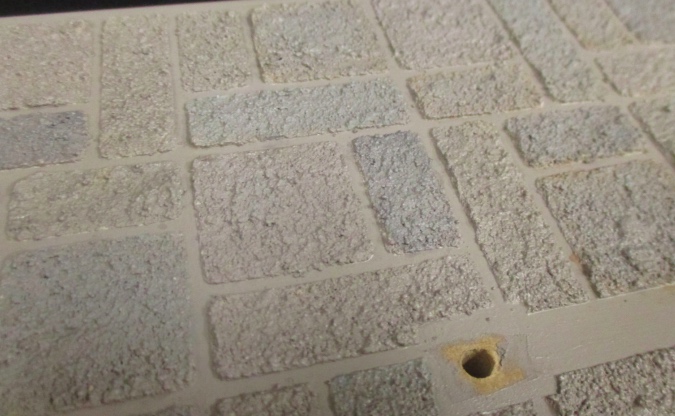 I used Andi Mortar Mix, which is dark gray when it’s wet. 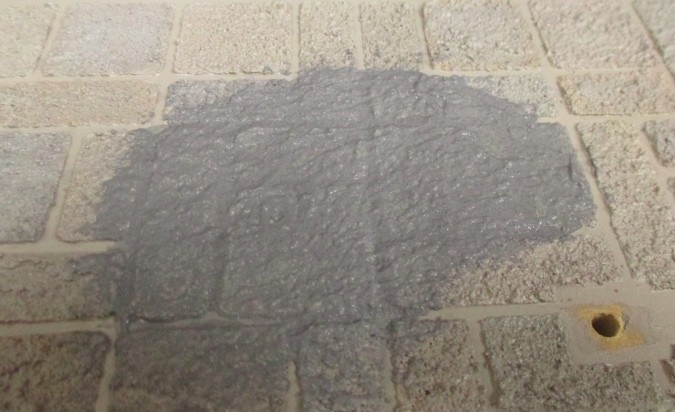 Of course it got stuck in the nooks and crannies of the stones. I removed as much of the excess as I could using a damp sponge brush and paper towels. 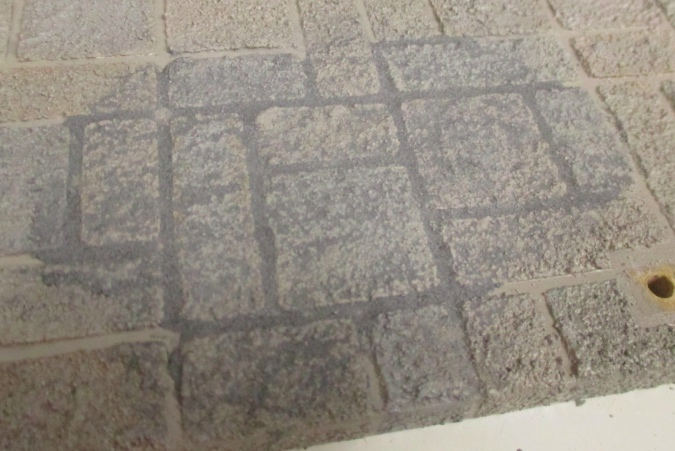 Here’s how it looks partially mortared (I put off doing the edges until the walls were glued in). When the mortar is wet, it looks pretty good!

Moving on to the bricks. The process for these is the same, but the powder that comes with the Magic Brick is red. (Actually, I think there’s also a version that comes with white powder, so double check if you’re buying it. The stuff I got came with brick-colored powder.) 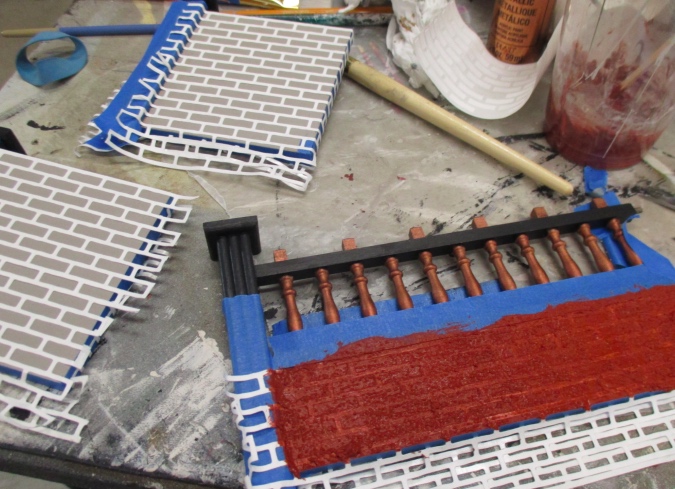 I don’t know what I did wrong with these but they came out BAD. Barely any texture clung to the bricks and the mortar lines look like runny mascara. Maybe the mixture was too watery? Maybe the templates weren’t stuck down firmly enough, allowing moisture to sneak underneath? (Probably both.) 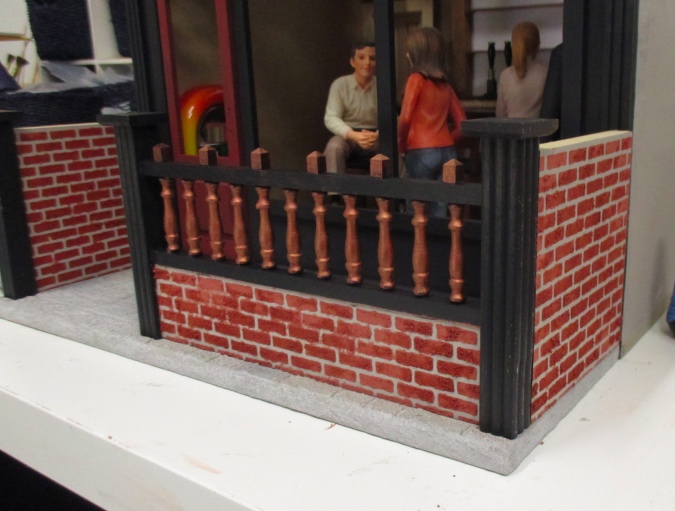 I was able to clean up the mortar lines somewhat by painting over them with a very skinny brush. 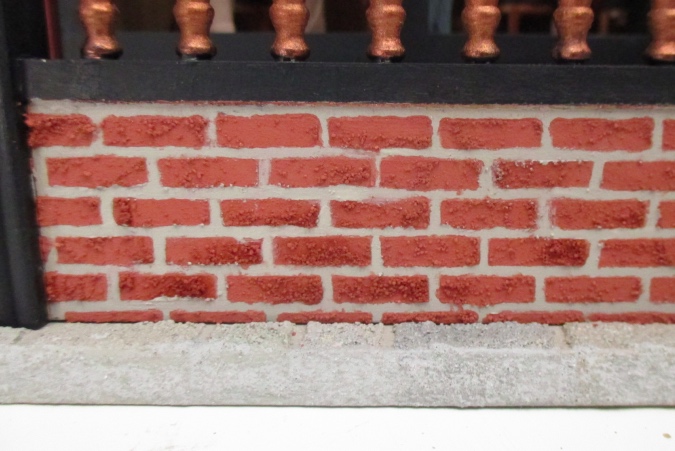 I can’t really do anything about the lack of texture. I was thinking of grouting these, too, but with barely anything protruding there are no lines for the mortar to fit into. I can live with it, but it’s nothing to brag about. I’m also planning to brick the exterior walls of the bar, so we’ll see if I do a better job the second time. 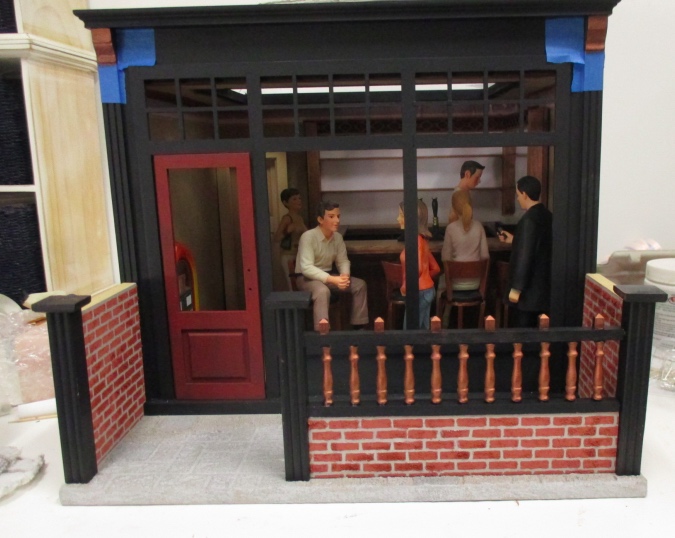 Back to the slate. Here’s how it looked once the mortar dried. Not as nice as when it was wet. The light gray color of the dried mortar sort of looks like a layer of ash or snow over the stones — not what I was going for. 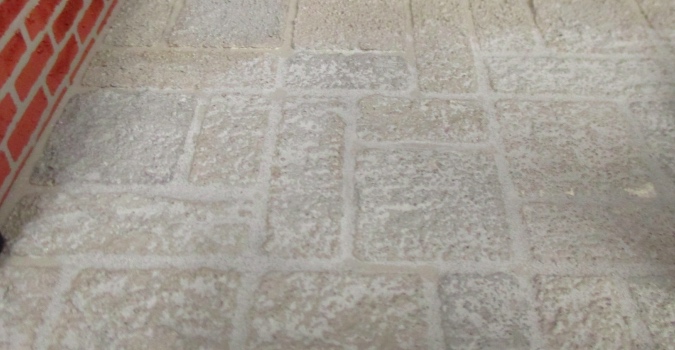 But I was in too deep to turn back. With the brick finished, I glued in the wall pieces and then mortared where the walls meet the patio. 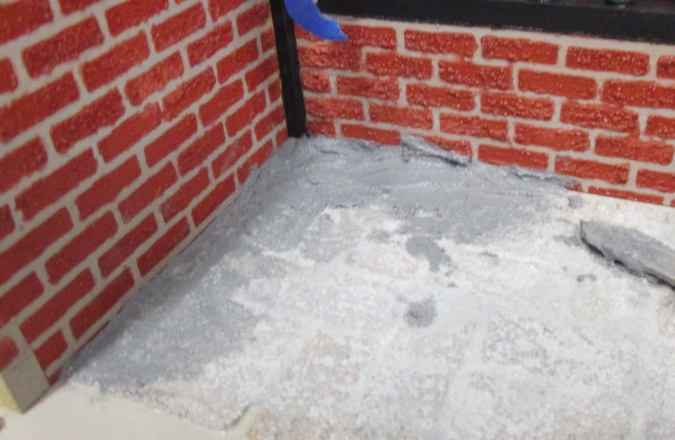 Once again, it looks decent when it’s wet (sigh). 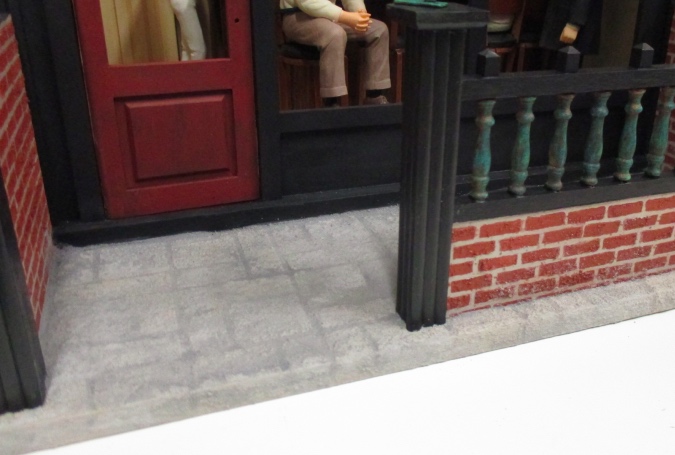 Not so much once it’s dry. I ended up re-mortaring the part I’d already done, and now that gray powder is caked on pretty good. You can barely see the colors and the grout lines anymore. Oops. 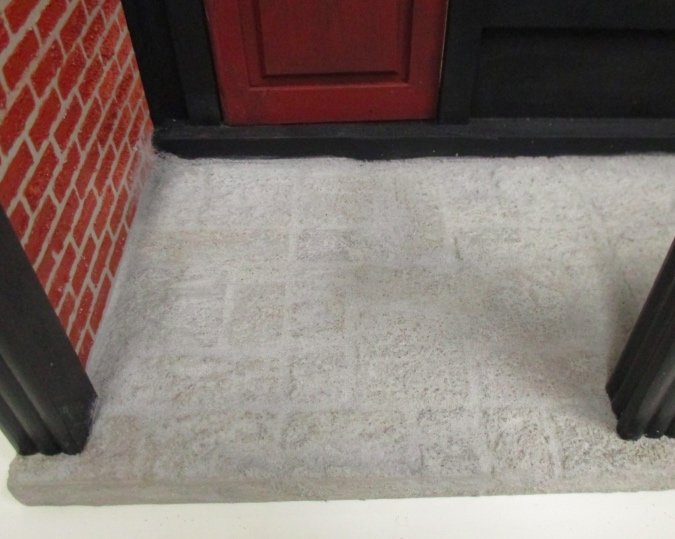 I added another coat of matte varnish, which changed the powdery look to a hard shell. The texture is more like stone now, and I think some of those colors are faintly visible (maybe it’s my imagination!), but the pattern of the pavers is almost totally lost. It’s okay — it may not be exactly what I intended, but it’s passable as a stone patio. When this roombox is finished there will be much more to look at than this! 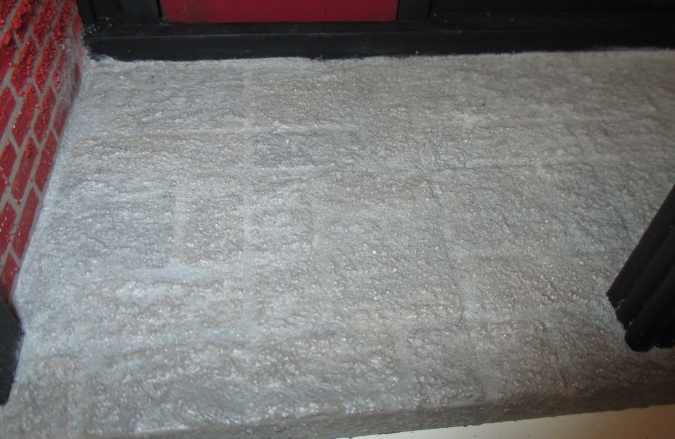 Backing up a bit, you may have noticed the railing turning to copper as if by magic. I was working on that at the same time as the brick and stone. Inside the bar will have a copper ceiling, and I wanted the railing to be copper to match. But because this is outside, it stands to reason the copper would be tarnished.

I did this using the same Vintaj Patina paints I used on the Victorianna’s tower roofs. First I added the moss color. 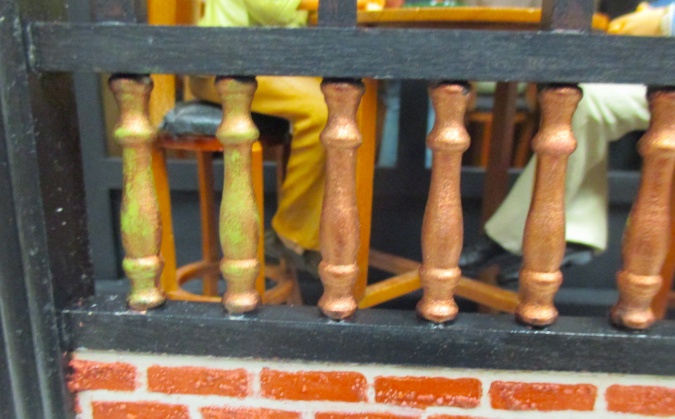 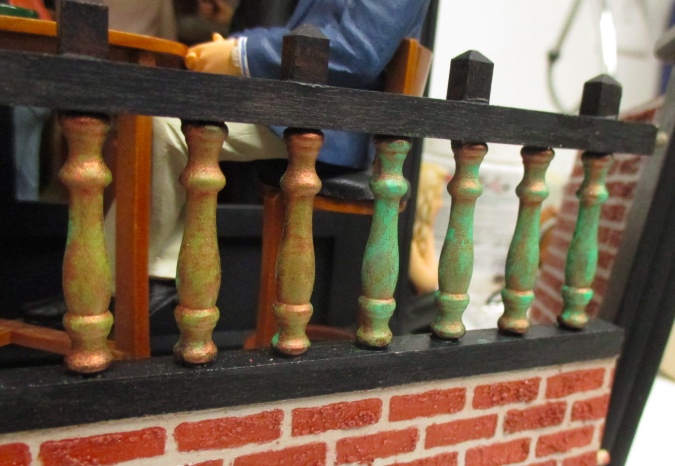 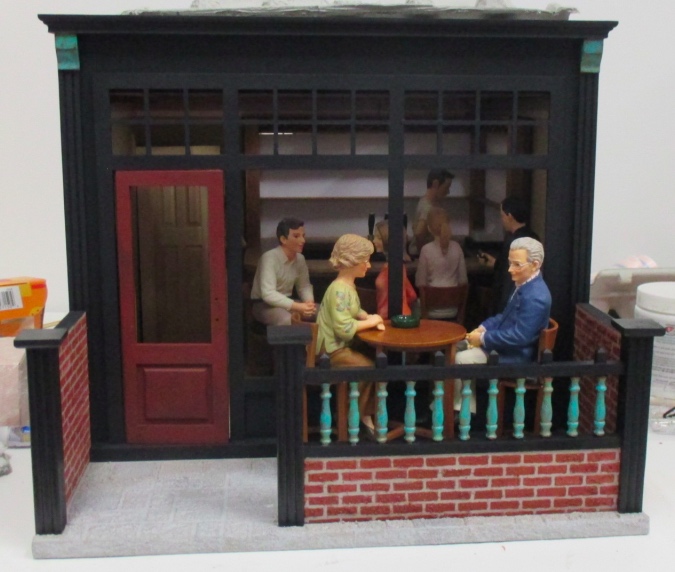 I was okay with the color on the railing, but the brackets at the top edges of the facade seemed like too much, so I decided to repaint those black. Then a happy accident happened: the black paint I’m using is pretty thin, and one coat barely covered up the color. This muted the blue just enough to make it bearable. 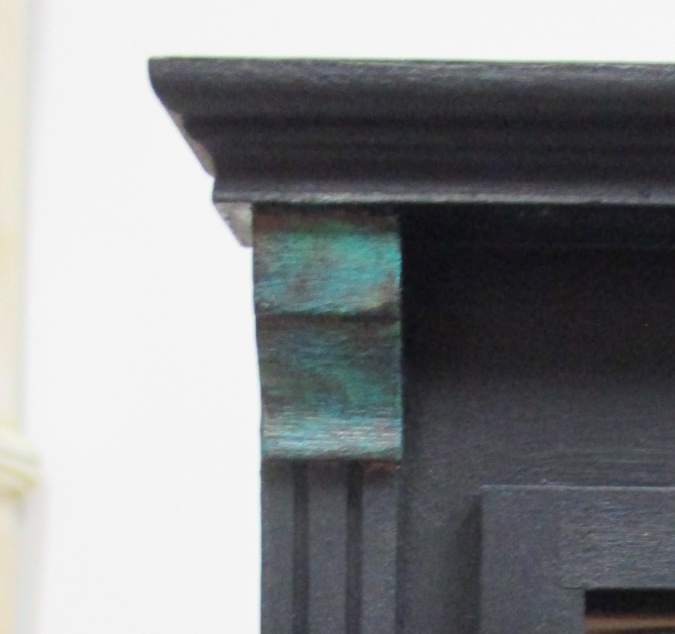 I tried it on the railing, lightly splotching on the paint and wiping it off with a tissue or my finger if it got too dark.

This looks much better to me – like the metal isn’t only tarnished, but also dirty. I may still end up painting the brackets black, but I’m glad I stumbled on this solution! 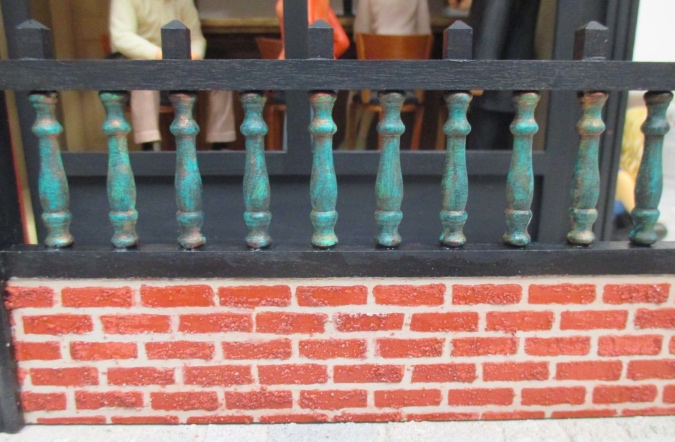 Here’s the state of the exterior with the brick, stone, and railing complete. The Magic Slate and Magic Brick were fun to try, but I’ll probably stick with egg cartons after this. 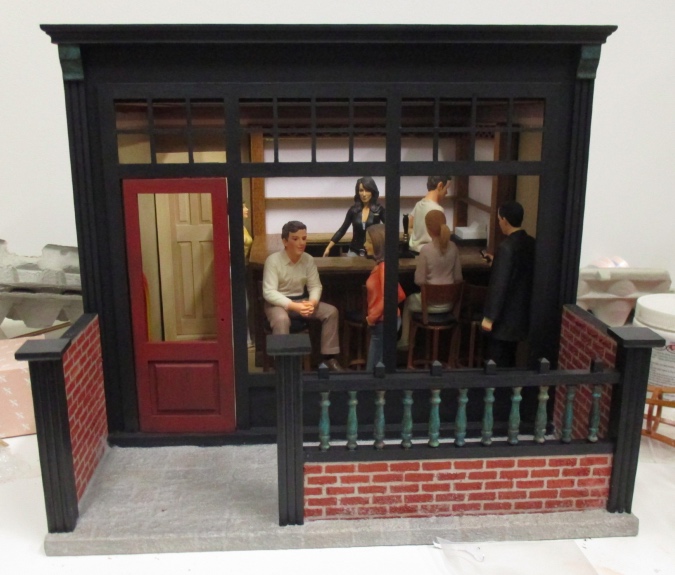 (The waviness under the front door, caused by mortar pushed up against the front of the facade, is bugging me. I’ll go over that edge with black paint to try to fix it.)

Miniature jukebox from a Christmas ornament