I’m waiting for supplies for the Blackbird Bar to come in the mail so I switched back to the Victorianna to get some work done on the towers. Here’s how they looked the last time I worked on them. 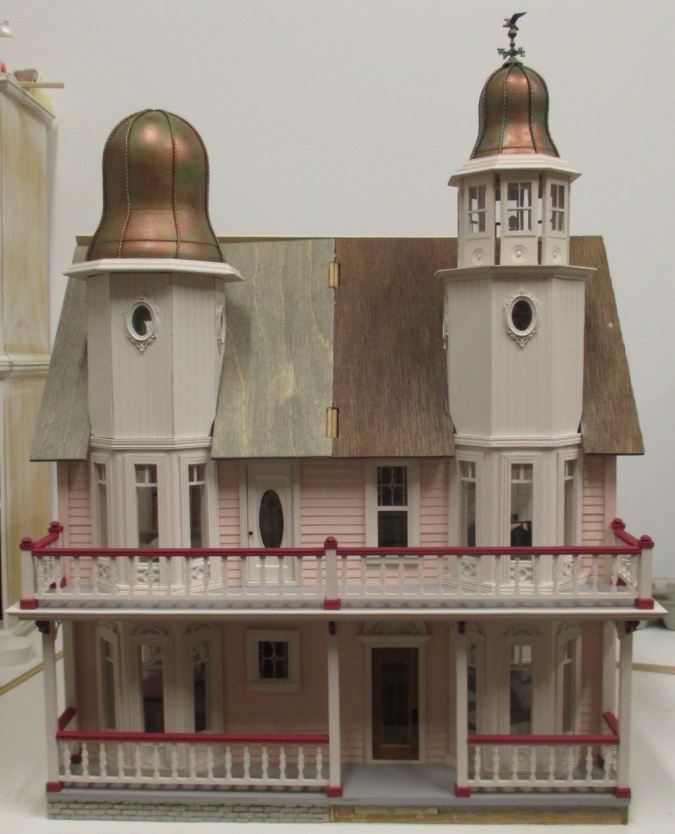 A couple things were bothering me. One, the base of the big tower roof, which is made from 1:12 crown molding, looks skimpy compared to the small one, which is made from the same crown molding plus cove molding. And two, the oval windows on the fronts of the towers look like they’re not lined up. They are, but because there’s more white space over the one on the left than on the right, it creates the illusion that the window on the left is lower.

To beef up the roof base, I added cove molding like I had on the smaller roof. This time the cove molding is above the crown, rather than below it, which left a gap between the round part of the crown molding and the sharp bottom of the cove molding. I filled in the gap with wood filler. 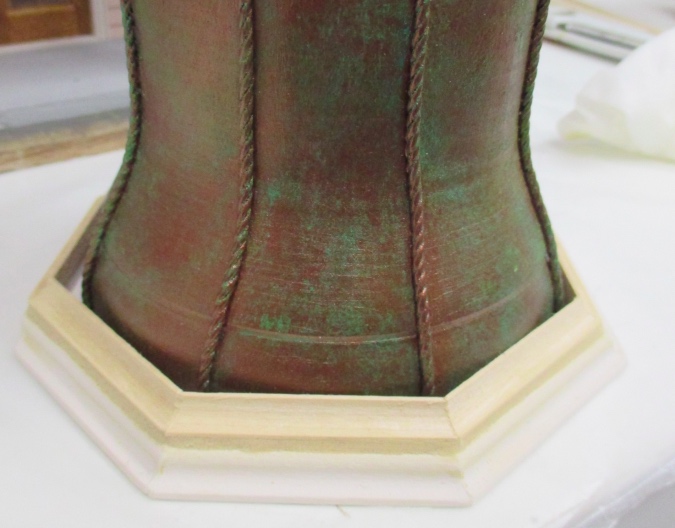 The big tower roof also needed its finial replaced after the original (small) finial I put on broke. (Then the plastic one I replaced it with also broke. Note to self: stop dropping the roof on its head!) I ended up using a 1 9/16″ Houseworks spindle. 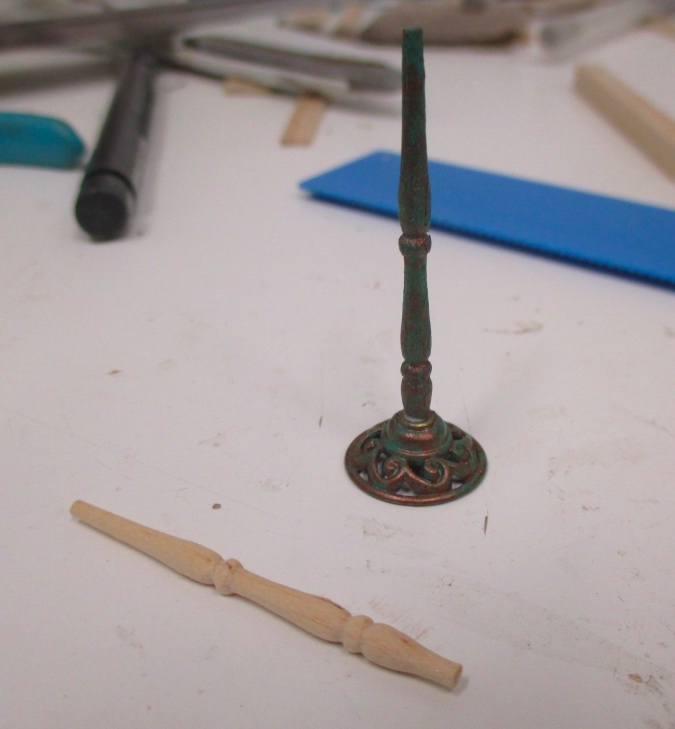 Here’s how the roof looks with the new finial and beefed-up base. 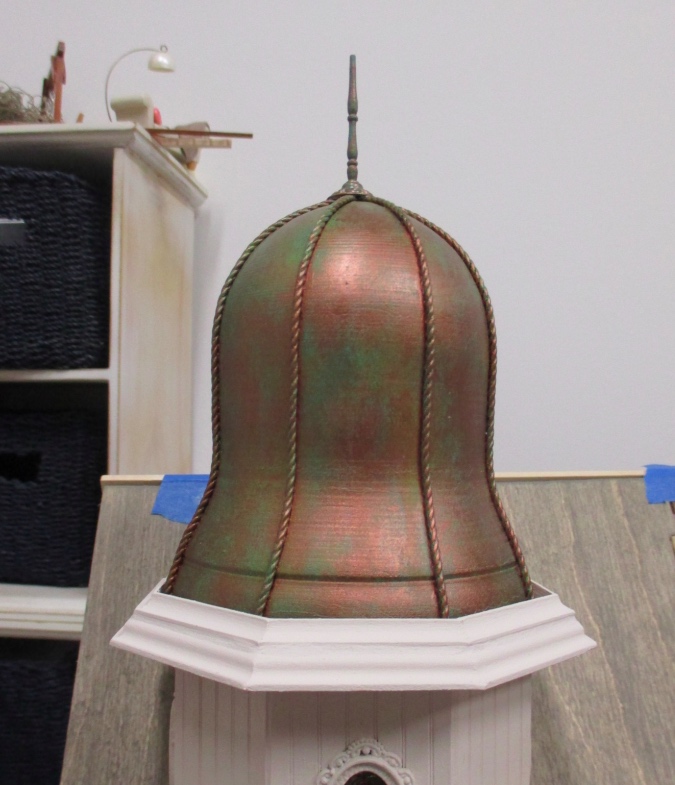 Next I added crown molding to the inside of the tower. 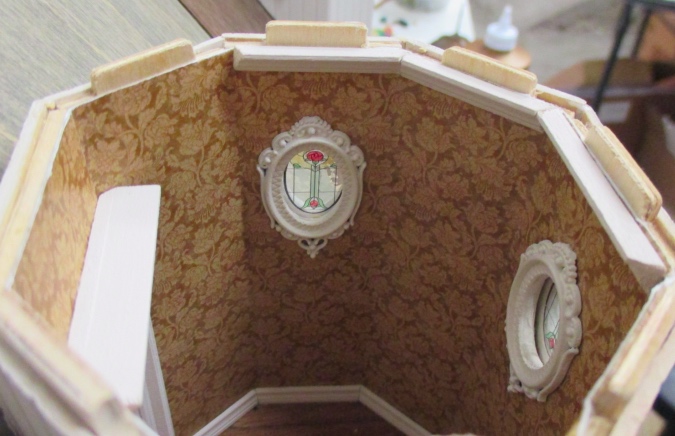 This was sort of unnecessary, because the wallpaper goes all the way up to the tabs and you can only see the crown if you crane your head (and then, only a few sections of it). But I’d added crown molding to the other tower — it was necessary there, to give the cupola base something to rest on — and I wanted to be consistent. 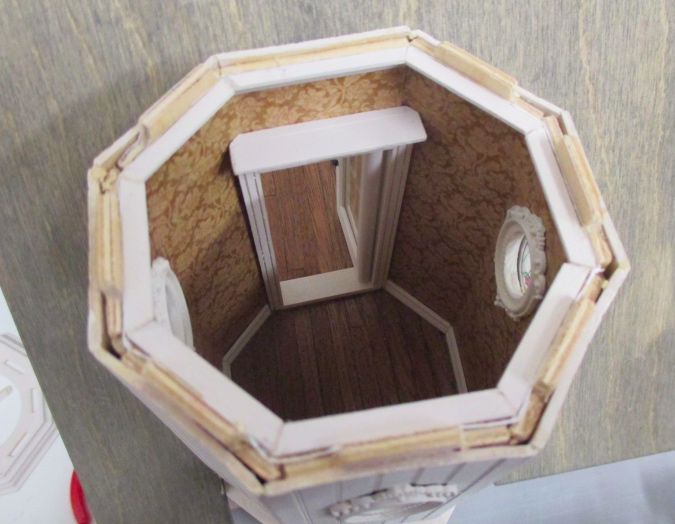 The joints aren’t perfect, but they’re so hard to see. It’s fine. 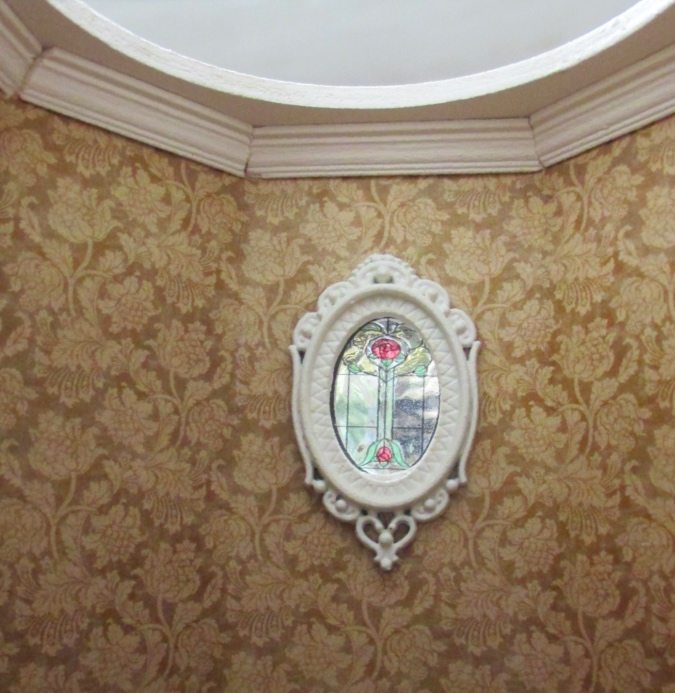 With the crown molding in, I glued in the base. Since there’s a battery operated light inside the roof, I don’t plan to permanently attach the roof to the base. Leaving the roof removable will also give me (limited) access to the tower room.

These tabs aren’t visible with the roof on, but you’ll see them if you remove the roof to look down into the room, so I should fill them in with wood filler and paint them. I’ll get around to it.

Some of the siding pieces around the outside of the tower don’t butt up nicely with the roof base. These gaps can be hidden with trim, with the added bonus of fixing the issue of the windows looking like they’re not lined up. 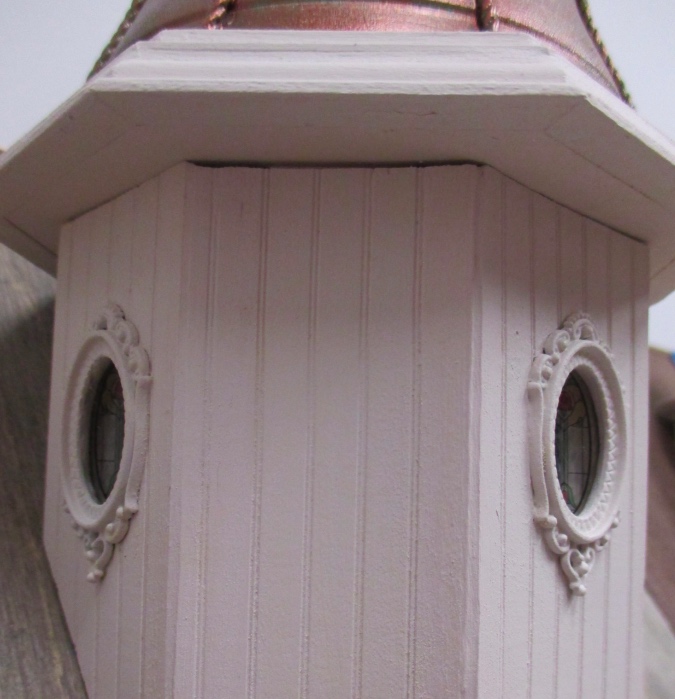 The corbels I used on the porch came in a package of 24 and I’d already used 8 of them, which left 16 — exactly the right amount to use two per panel on the eight-sided tower. (The other trim in this picture will go around the platform on the other tower.) 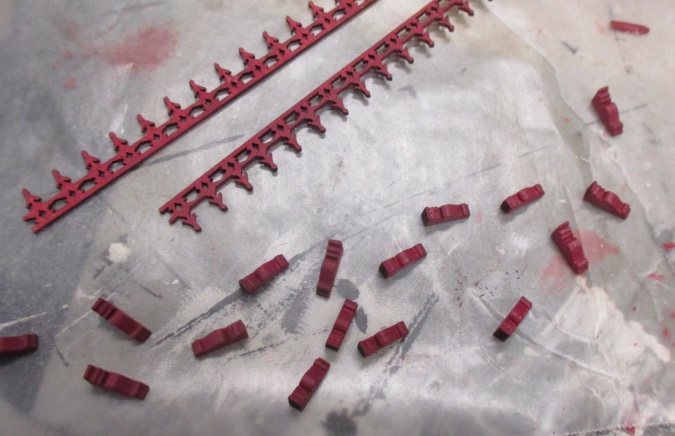 By using two corbels per tower, I can fill the space between them with a straight piece of trim, rather than having to do the 67.5-degree angles again. I glued the corbels in first. 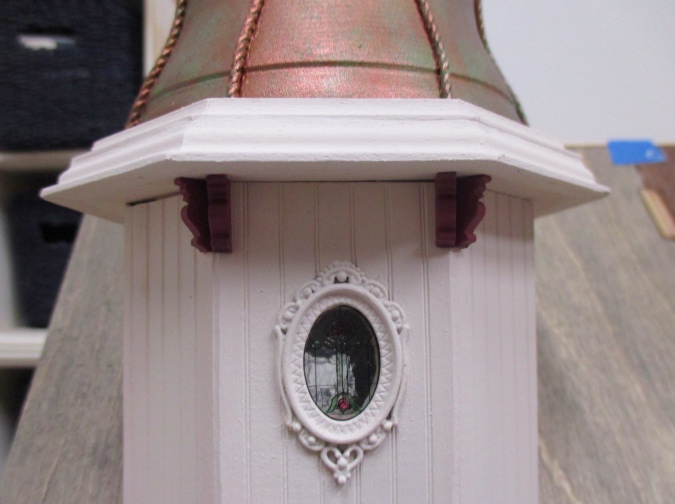 Then I cut pieces of 1/4″ casing to fit inside the spaces. 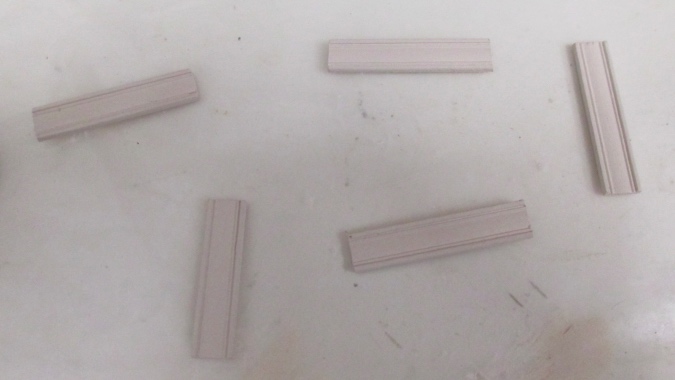 No more unsightly gaps! I only ended up using 14 of the corbels — there was no way to get my hands in to glue them (or trim) to the back panel of the tower, but you can’t see that they’re missing. Shingling back there is going to be a challenge, though. 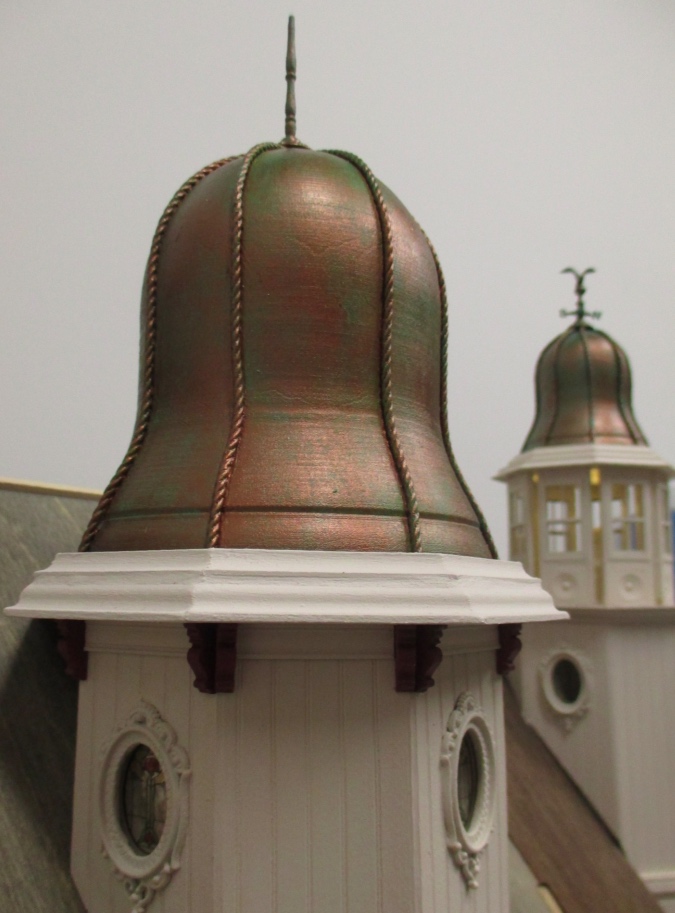 The 1/4″ trim leaves the same amount of space between the bottom of the trim and top of the window as there is between the trim and the window on the other tower, so that takes care of the windows appearing not to be lined up. I noticed that the right tower looks like it’s leaning over in this picture — it’s not! Another optical illusion, I promise. 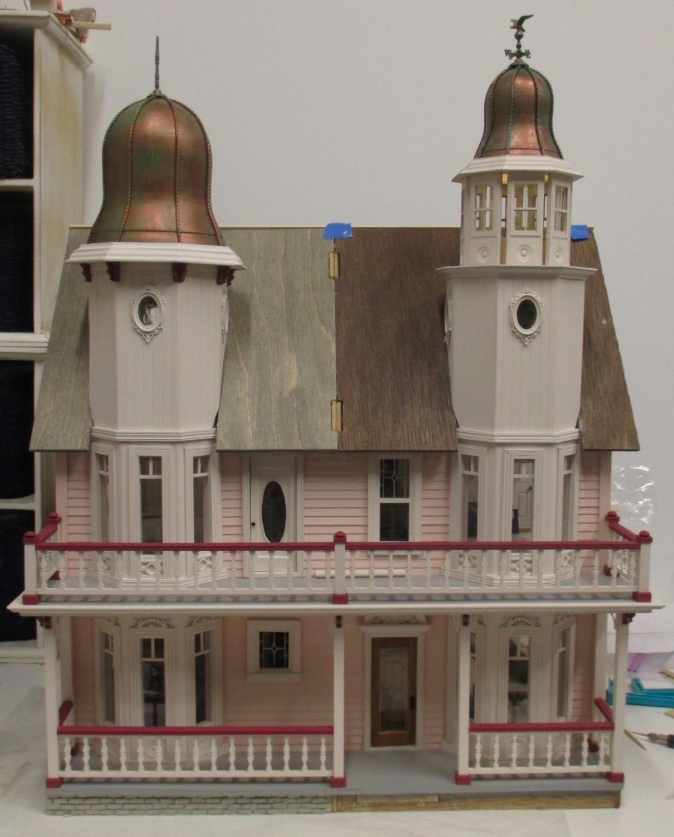 So that’s one tower down. (Finally!) Next time I work on the Victorianna I’ll finish the other one. 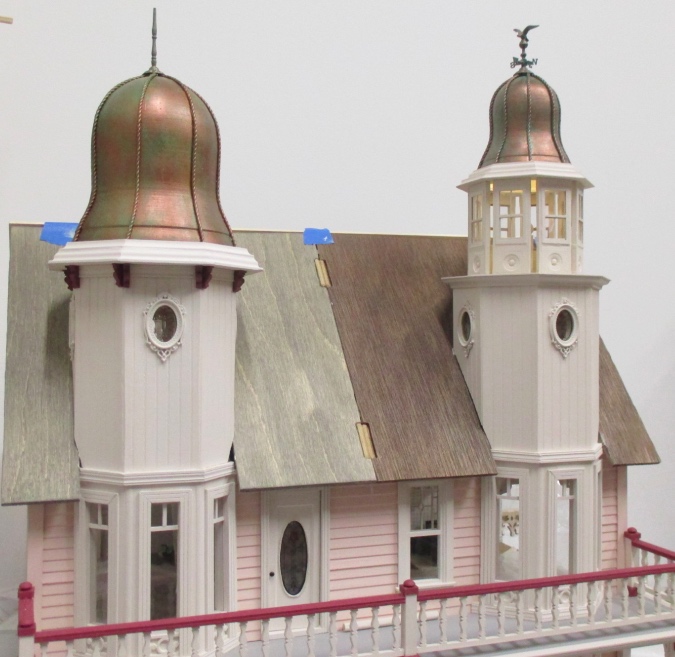