Inspired by the Henchmen Pub, I decided to add optics to my bar. I kept seeing these for sale from UK miniature shops and had to look up the word “optic” because I hadn’t heard it before. They’re dispensers that hold a bottle upside-down and pour a measured amount of liquor. They seem to be more common the UK than the US.

Many years ago, when I first got the idea to make a bar, I bought a batch of cheap bottles on eBay (probably from China) that were not very well scaled. I cut these down to use in the optics. 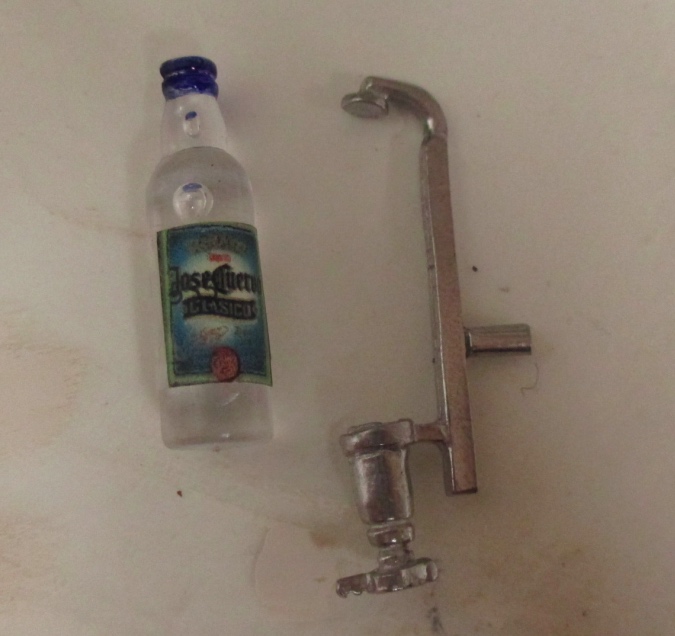 After cutting off the cap, the bottle *almost* fits. 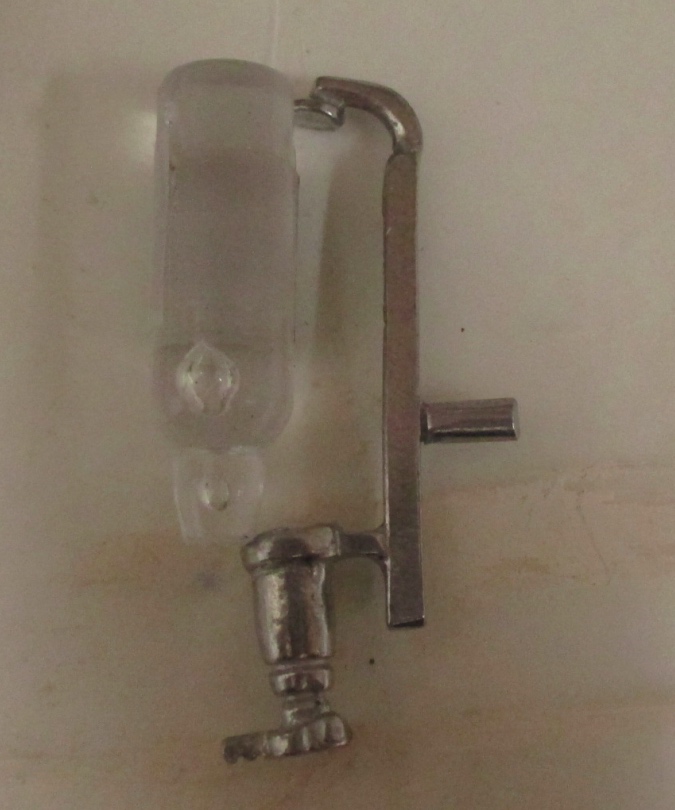 I then cut off a small slice of the bottom and sanded so it’s a good fit. The optics are made out of pewter and can be bent slightly, but I didn’t want to bend too much and risk breaking them. I colored in some parts with black Sharpie to make them look less like raw metal and more like the pictures I’d seen online. I also replaced the labels with ones I printed. 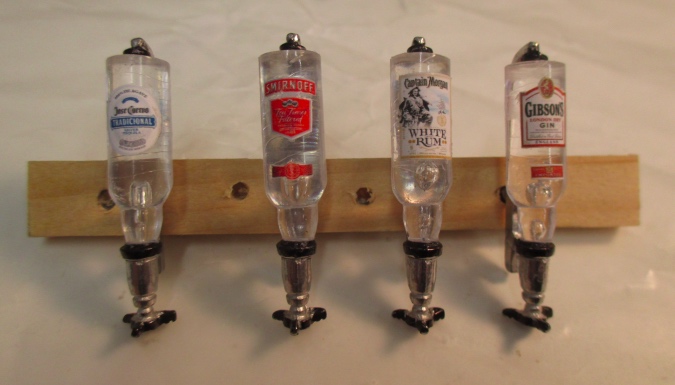 My shelves are too thin and flimsy for the optics to hang off of them. Instead I built a box to sit under the shelf. This is the same width as the wine rack that goes under the bar, and they will both be centered in the space. 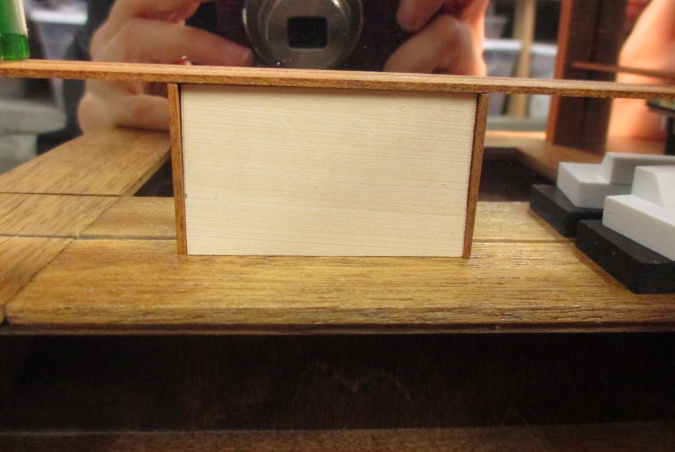 I drilled these holes with the power drill… not very well. 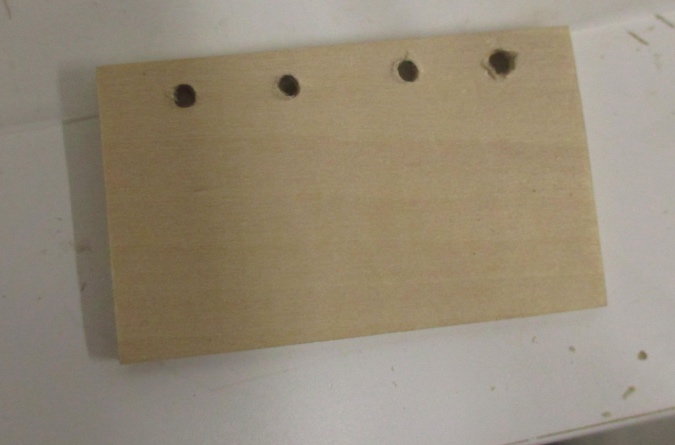 Here’s how they look. It bothered me that the two optics on the right sit slightly higher than the two on the left, due to my messy holes. Rather than prepare a new piece of wood, I forged ahead, thinking I could fix it somehow. (Why do something over when you can deal with it later?!) 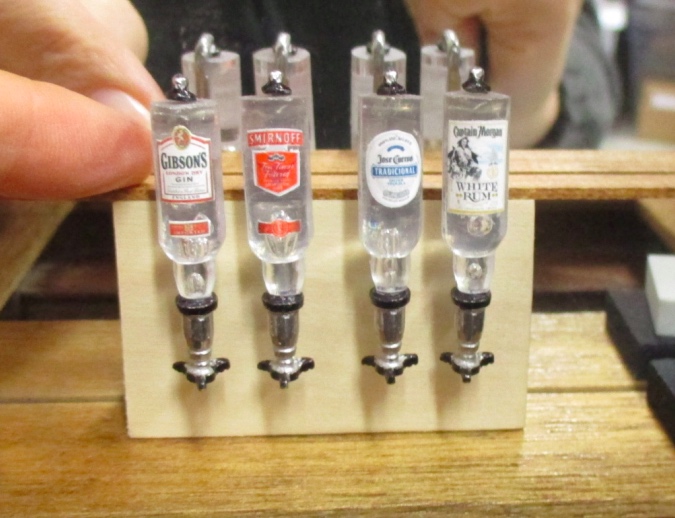 After staining the front piece, I glued scraps of wood to the back for the side pieces of the box to attach to. (As you can see from the guide line, the two high holes are actually in the right place, it’s the other two that came out a hair too low.) 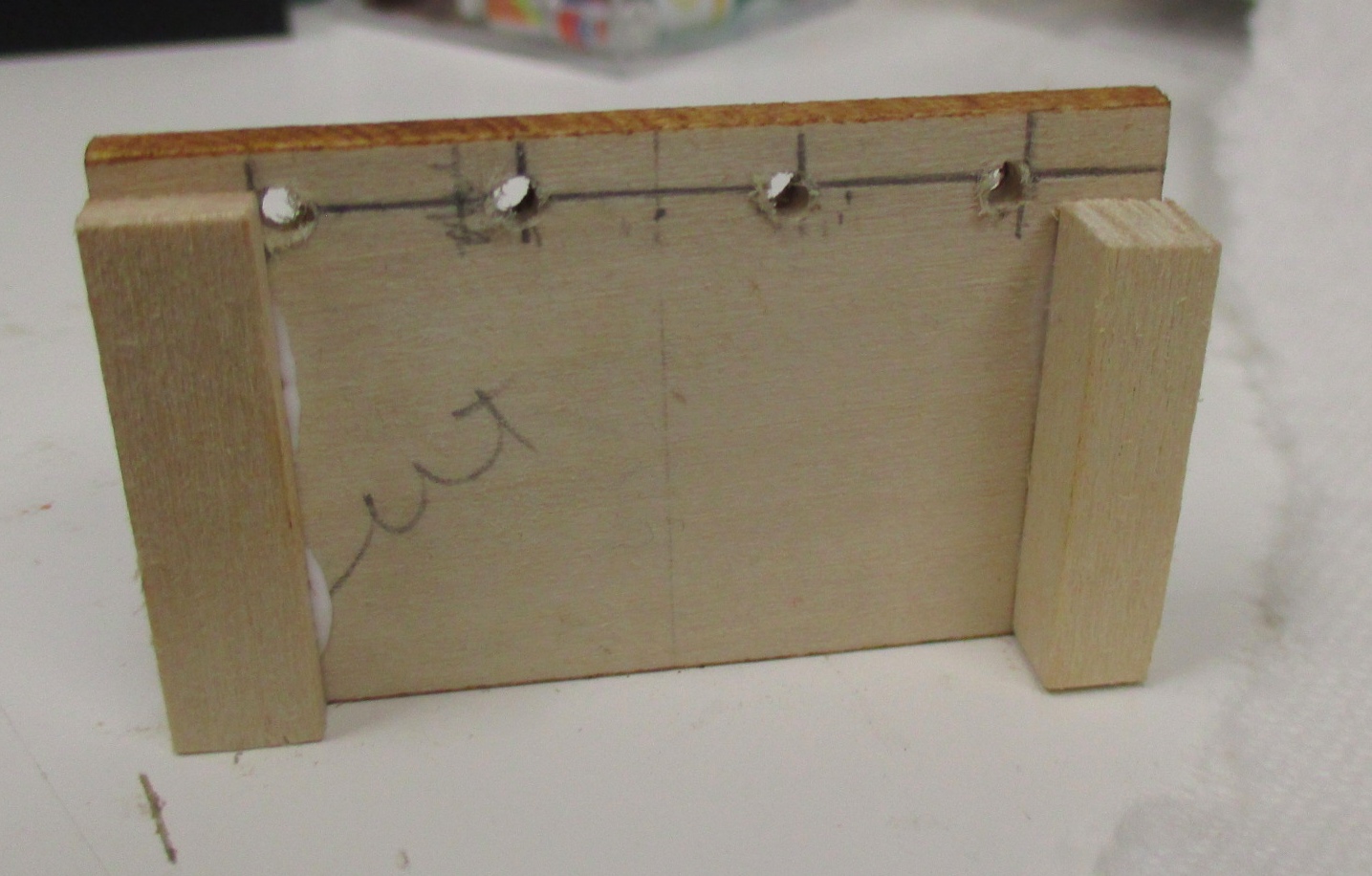 Here’s how the assembled box looks, with the wine rack below it. 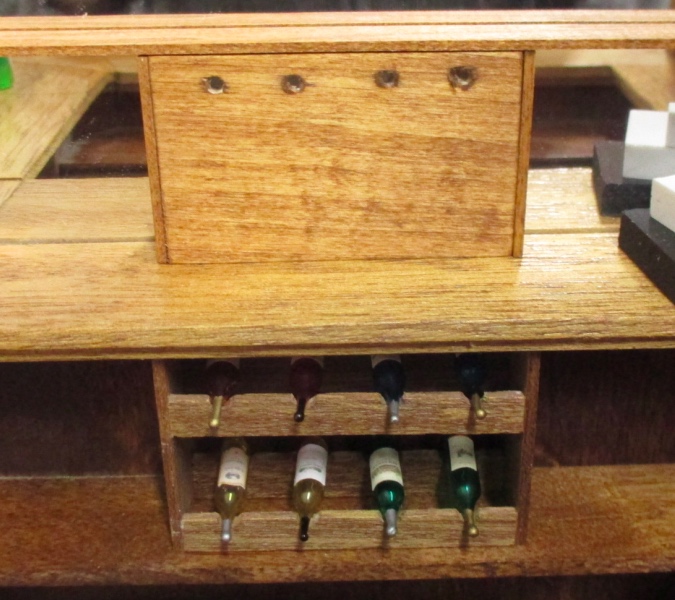 So remember when I said I didn’t want to bend the pewter too much or it would break? Trying to make an optic sit a little lower in the highest hole, I *gently* tried to tilt the part that sticks into the hole and… yeah. 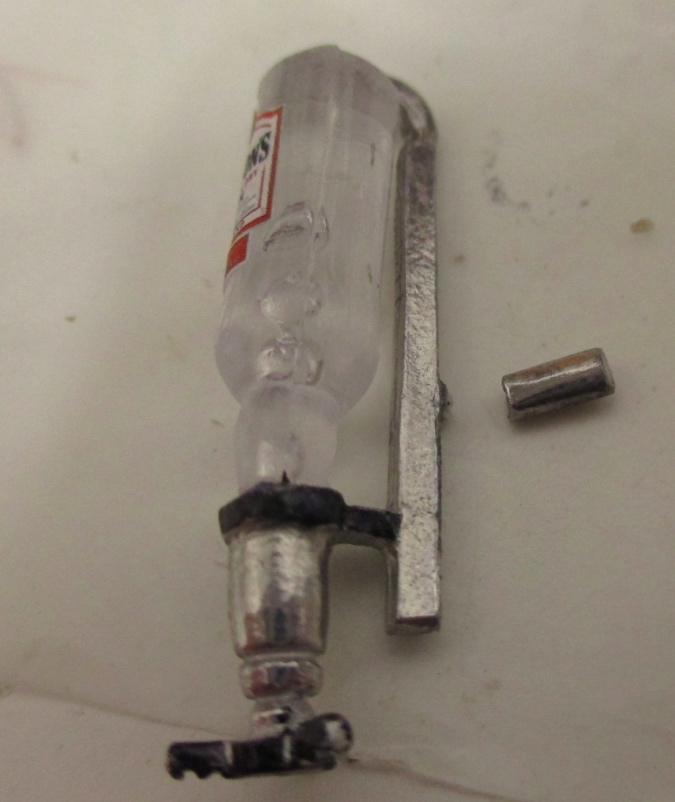 I tried gluing the broken optic directly to the box, but it didn’t hold. I’d ordered the optics from a site in the UK and wasn’t willing to spend a bunch of money to ship a replacement, so I planned to make a new box that only held three. Then I got the idea to stick eyelets into the holes — not only does it make them look neater, but it gives me a new way to hang up the broken optic. 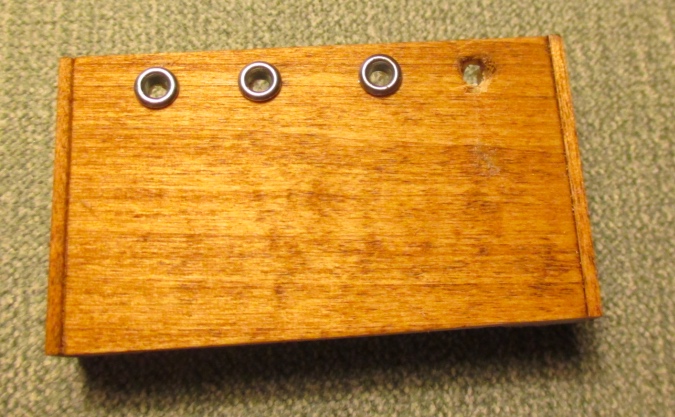 I’m still kind of amazed this worked. Using super glue and tacky glue, I managed to glue the tiny nub left behind on the back into the eyelet hole. 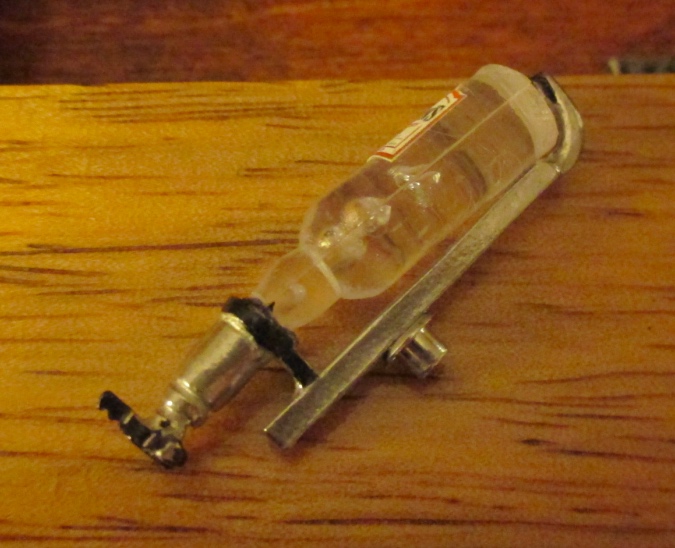 The gin bottle lost its red stripe in the process, but at least it doesn’t have to be trashed! Because I was too lazy to fix my mistake with the holes, the four optics are not exactly lined up, but everything’s so busy, it’s okay. Ironically they’re too low to actually put a glass underneath, but I was constrained by the height of the shelf. 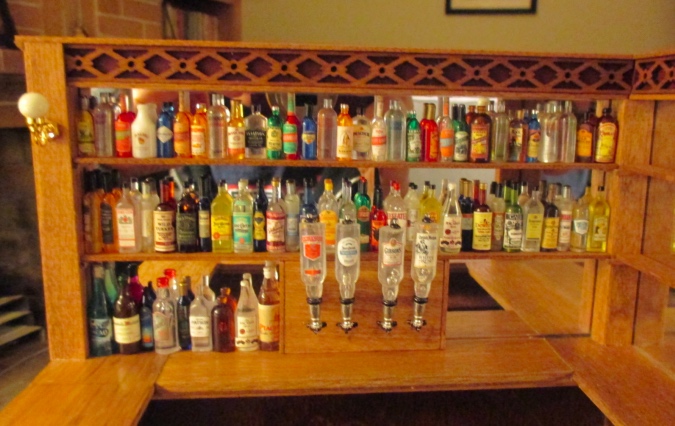 I’ve also continued to make bottles. After my first batch, I wanted more variety and came up with some new ideas for making Christmas light bottles.

The bottle in the middle is a new one — I liked the ones that had straws for necks, but the straws seemed a little too fat. I made some bottles with skinnier necks by slitting the straw, adding glue to the inside edge, and then rolling the straw between my fingers to work it into a tighter tube. This one has a seed bead as the top. The green bottle next to it is one I bought, so you can see how the proportions compare. 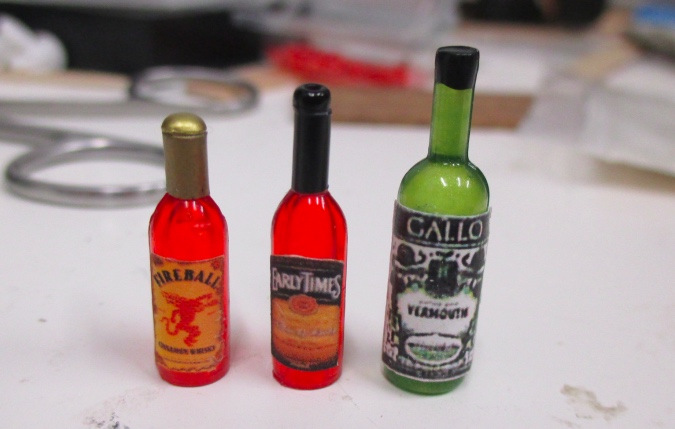 Most of the LED lights I got at Michaels were too tight in the plastic bases to be pulled out, and needed to be cut, but this is what they look like when you manage to wiggle them out of the base. I’d cut down several before I realized I could use them to make taller bottles. 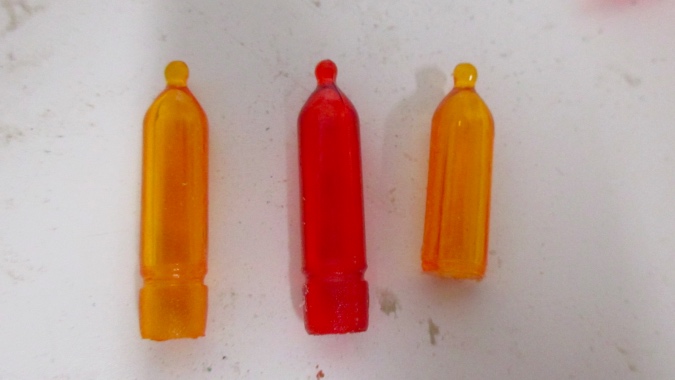 Here’s how those turned out (next to a purchased bottle for reference). The label covers up the groove around the bottom. 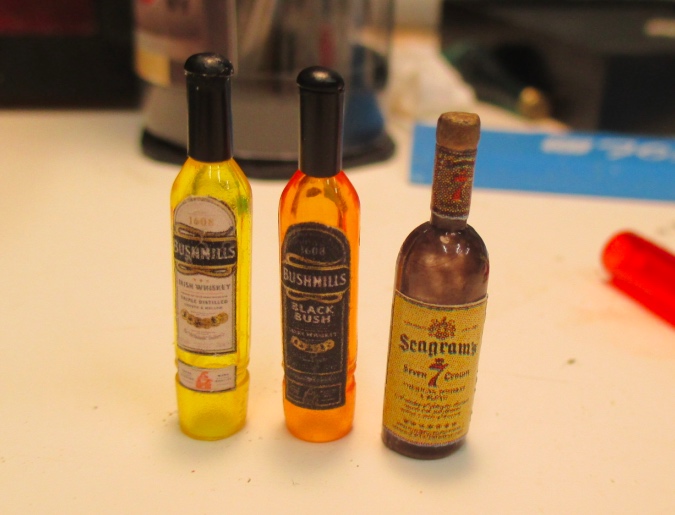 These are bottles I bought, but I didn’t like the labels they came with, so I replaced them with ones I printed out.

Here are some more Christmas ornament bottles. I made these using this picture. 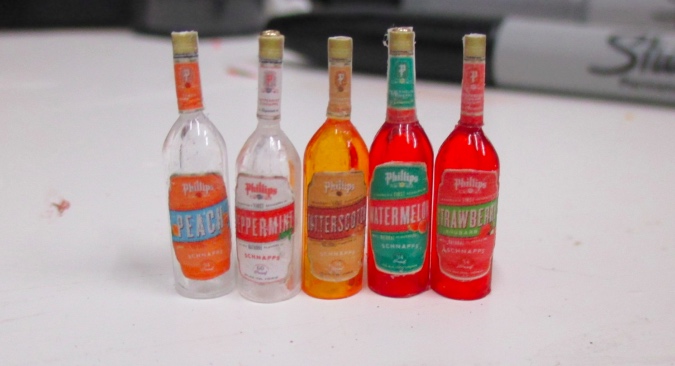 To make the necks, I had to sand down the ball at the top of the Christmas ornament. I wrapped the neck into a thin tube and glued it over the nub. 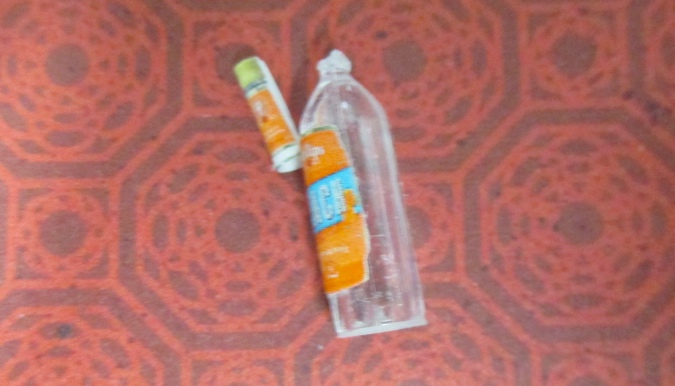 The neck is white on the back — I could have fixed this in Photoshop but it seemed like a lot of effort when you’ll barely see the backs anyway. (You can see them in the mirror, but you really have to go looking.) I stuck gold seed beads in the tops of a few of the tubes so to look like they had caps, but the beads wouldn’t fit in all of them. You won’t be able to see the tops when they’re on the shelf, either. 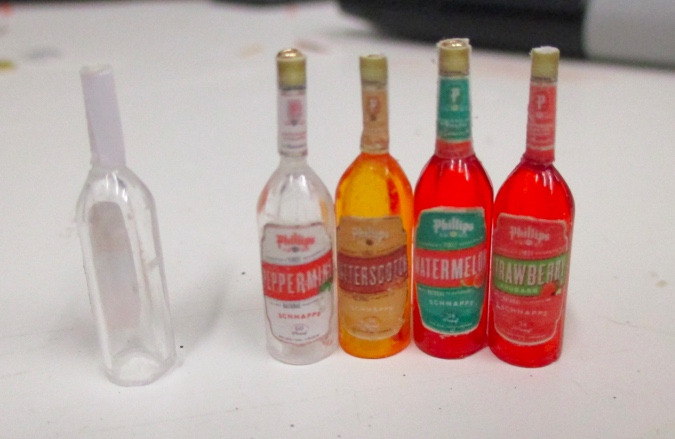 Finally, to keep from having too many of the same size and shape, I bought some blank bottles from Alpha Stamps. To make a set of Absolut Vodka bottles, I cut down the long necks. 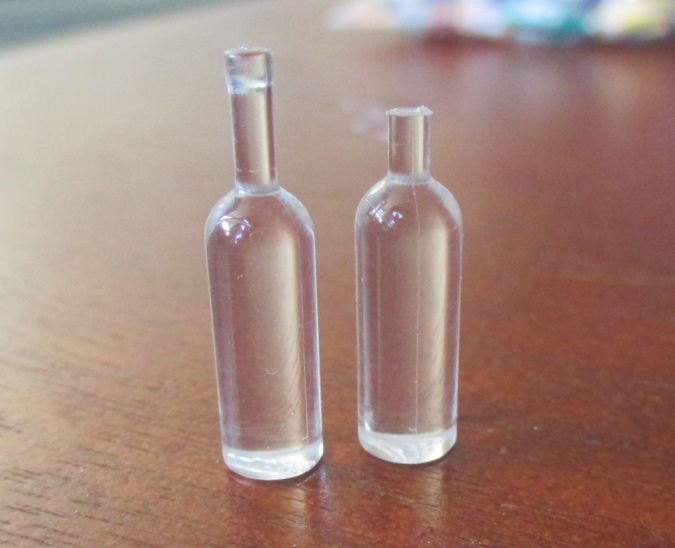 These labels are printed out on Avery Glossy Clear Sticker Paper. I’ll have another post soon that goes into more detail about this process. The caps are colored in with silver Sharpie. 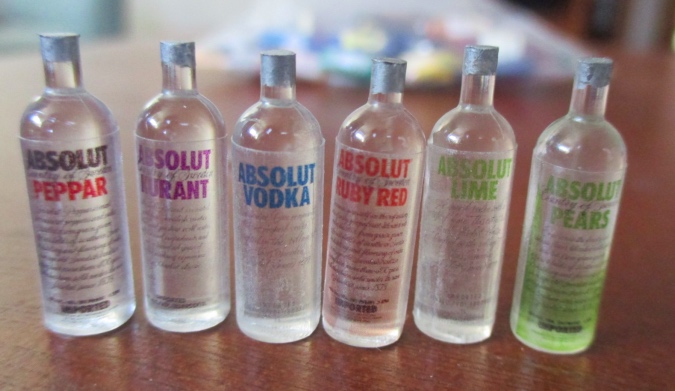 Here are a few other bottles I bought as blanks. The Malibu label is also printed out on the sticker paper. On the rum bottle in the middle, I sanded down the molded cap and slipped a piece of straw over it. The cap is one of the cut off tops from the Absolut bottles, colored black and glued into the straw. 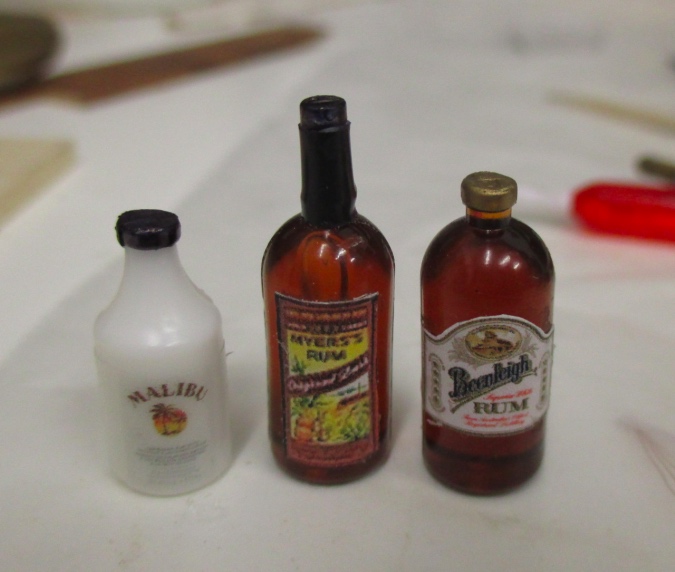 Seeing how the rum bottle looked with a neck, I decided to modify the one with the gold cap, too. For this one I cut off the cap, glued the piece of straw to the nub, and then glued the cut-off cap to the top of the straw. (The glue’s still wet in this picture.) Now my three brown rum bottles all look a little different. 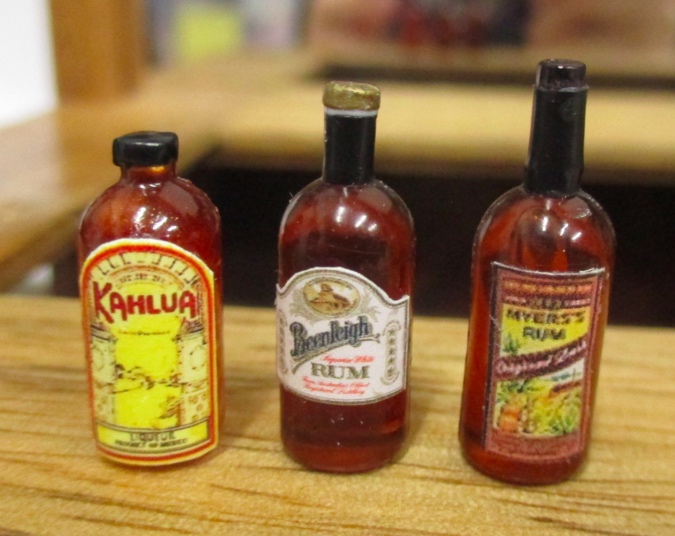 I finally have enough bottles to fill the shelves — now everything can be glued in!