Anyone know what this is?* We keep spotting this guy (maybe more than one of them) in the back yard. When it moves it looks like a snake, but it has legs.

In other backyard news, the vegetables have grown quite a bit since they were planted a month ago… 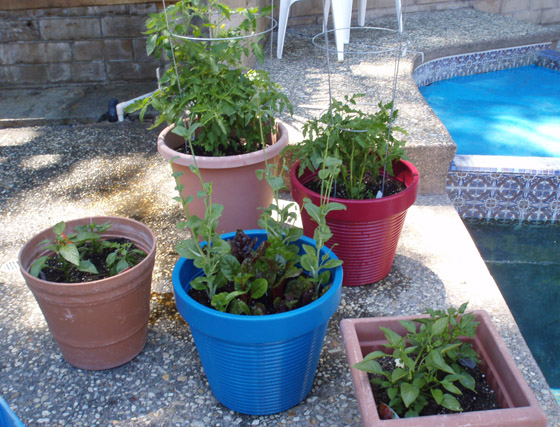 The biggest tomato plant (back left planter) is the Juliet grape, which was already larger than the others when I planted them. The rest are doing well too, though, with flowers showing up on several of them this past week. I hate to prune them because it’s so exciting to see them grow, but I’ve been removing some of the lower branches to encourage them to get nice and tall.

The bok choi continues to grow ridiculously tall. I actually pulled out three of the six plants and we ate the leaves and stems as part of a stir fry. I decided to leave the others for a while to see what happened. I keep plucking off the buds before the flowers start to bloom. I planted some new Swiss chard plants in the holes left behind by the pulled-out bok choi, so all in all there are now ten Swiss chard plants (possibly too many for that planter). The original four have some nice hearty leaves but we haven’t sampled them yet.

Last week, after a lot of searching at various nurseries, I finally found a habanero plant. (It was the last one, too!) Apparently this is a hard year for habaneros. The nursery was having a buy one, get one free sale, so I selected a Caribbean hot pepper that is supposedly even hotter than a habanero. Some of the pepper plants seem to be thriving more than others—in particular, the Hungarian wax and the sweet peppers are getting larger and growing flowers—but last year my peppers had a slow start, and didn’t really come into their own until August, so I’m trying not to read too much into it!

The mint is doing well, too. This week I had my first mojito of the summer. Let’s just say that planting mint in the backyard was a very good idea.

*While I was writing this blog, Geoff did a Google search and discovered that the lizard is most likely a Western skink. Exotic.