Last week Geoff and Rosy and I went on vacation to Irish Beach, near the Mendocino coast. I have some ridiculously pretty pictures of the ocean to post, along with some ridiculously adorable pictures of Rosy enjoying the beach, but first I wanted to share what was possibly the most (ridiculously) exciting moment of the whole trip.

I found a boxed copy of King’s Quest V on floppy disks. At a flea market. For $3. 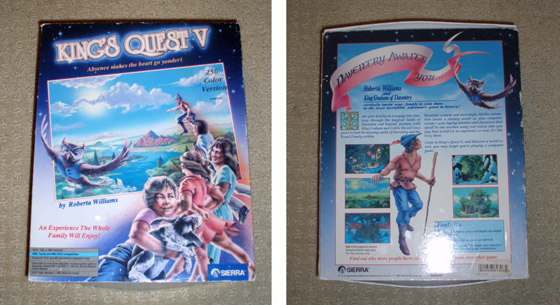 I almost missed it, too. The poor thing was on the very last table in the place, which I only glanced at as I walked by on my way out of the store. But something stopped me. Was that the King’s Quest logo I saw? Nah… couldn’t be. I took a cautious step closer, and—yes! King Graham of Daventry! On a table with a bunch of board games and puzzles! With a $3 price tag!

King’s Quest V had two releases. This one, which I have always thought of as “the version with the dorky family on the box,” came first. I think there were a few different iterations with different specs (16-color, 3.5″ floppies, etc.) The one I bought has 256-color VGA graphics and comes on nine 5.25″ floppies and one 3.5″ floppy, which was apparently a startup disk for people who didn’t have a hard drive to install the game onto. 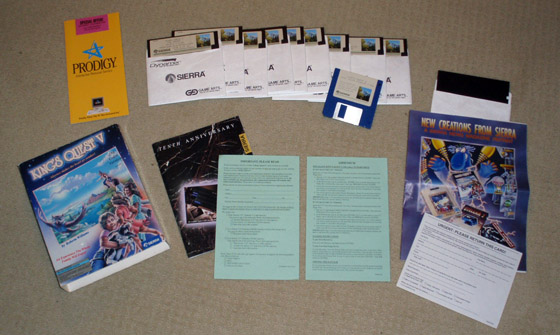 From what I can tell, most of the pieces are here. There’s documentation that explains the technical specs and how to downgrade to the 16-color version if your computer isn’t robust enough for 256 (heh), a 10th anniversary catalog, a Sierra News Magazine reprint that describes all the new games circa 1990, and a warranty card. There’s also an unmarked floppy that I’m guessing holds the saved games of the previous owner, but without a 5.25″ drive in the house, I may never know.

Noticeably absent is the game manual. Of course, at this point Sierra’s games still shipped with copy protection codes that were contained in the manual, so it must have existed once. As karma would have it, I still have the game manuals and hint book from when I first played King’s Quest V on a Mac, though the disks and box are long gone. So, whoa! Now it’s a full set! 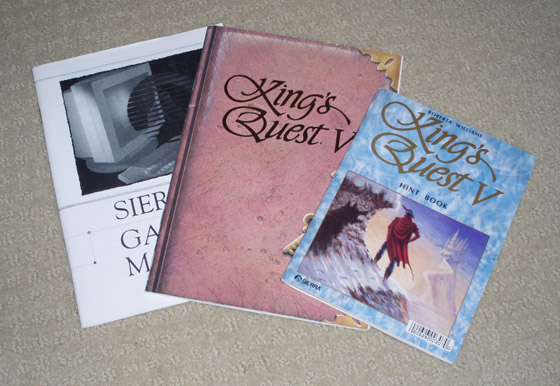 The manual I have isn’t quite right for this release, as you can see over at Vintage Sierra. Mine, which has a 1991 copyright date, has the more ornate logo that was also used on the second box design and later on the King’s Quest VI box. The hint book is also marked 1991, and now I’m wondering if there’s another version of the hint book, too? Hint books were big business in those days; I find it hard to believe that Sierra would have waited a year after such a major release to put one out. Anyone know?

From a marketing perspective, this box is interesting to me because it’s so blatantly trying to sell King’s Quest as a game to play with your family. In fact, the box copy says very little about the game’s storyline or gameplay, instead focusing on the family appeal. (It does, however, helpfully promote that the characters speak to each other with real voices in the CD-ROM version. Which isn’t what this is.) 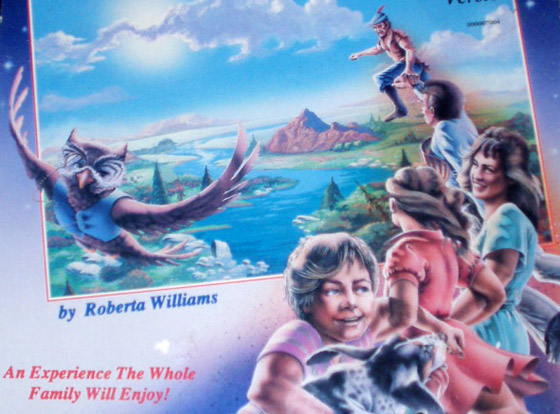 Having worked on a few game packages myself, I know that the design and messaging are often dictated by sales goals and audience demographics and all that boring stuff. King’s Quest was already a hugely popular series by 1990—and it had always been family friendly—so it seems odd that Sierra would need to entice new people into the series with the “family experience” message at the expense of grabbing the existing fan base with a summary of the game’s storyline. (Not to mention that the family depicted on the cover, who Graham is literally pulling into the game, is incredibly dorky even by 1990 standards.)

Maybe Sierra thought the existing fans were a shoo-in, so they instead jumped at the opportunity to hook new players who would be more likely to try a game with a streamlined point and click interface than the previous parser games? (Maybe I’m way over-thinking this?) Whatever the rationale, it was short-lived, because the second version released later in 1990 (or 1991?) had a much more epic cover depicting King Graham on an icy mountain, looking at a castle in the distance.

But I digress. After taking these pictures and reuniting the lonely Mac manual with its DOS cousins, I slipped my flea market find onto the Sierra shelf in my closet. And there it will live out the rest of its days, nestled between the King’s Quest collection I got off Craigslist and the Sierra Award Winners box set (which happens to contain a version of King’s Quest V on 3.5″ floppy disks) that I found at Goodwill. 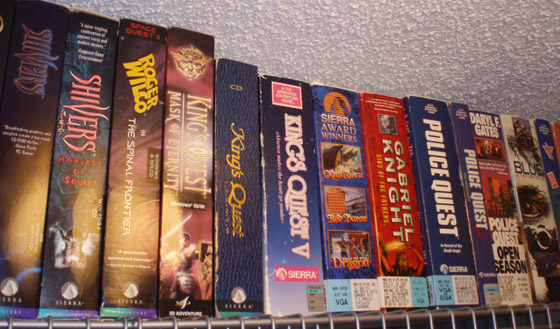 You can relax now, King Graham and your dorky box. You’re home to stay.

Lemon Boy and Early Girl, sitting in a tree…

Don’t be a Sue