LeChuck where I least expected him

I bought myself the first season of Thirtysomething

as an early Christmas present. I’m a borderline crazy fan of the Marshall Herskovitz / Edward Zwick shows My So-Called Life

and Once and Again

, and have been wanting to watch Thirtysomething—their first show—for ages now. (Initial impressions: kinda self-conscious, kinda slow in the storytelling, a bit too reliant on crazy dream sequences, but just as authentic in the “slice of life” department as the later series. Hopefully it hits its stride later in the season.)

Anyway, while watching an episode last night, I was surprised to see Earl Boen’s name scroll by on the opening credits. (For the non adventure gamers reading this, Earl Boen voices the ghost pirate LeChuck, the main baddie in the Monkey Island games. But if you don’t know who he is you’ve probably stopped reading by now. And if you haven’t, you probably should. This is not a particularly interesting story.)

Of course I know that a lot of actors who do video game voices have other acting chops, but I can’t remember ever seeing recognizing one as a TV guest star before.* I was on the lookout throughout the episode but didn’t figure out who he was until I consulted imdb afterward. Guess I was expecting someone dressed more like this. 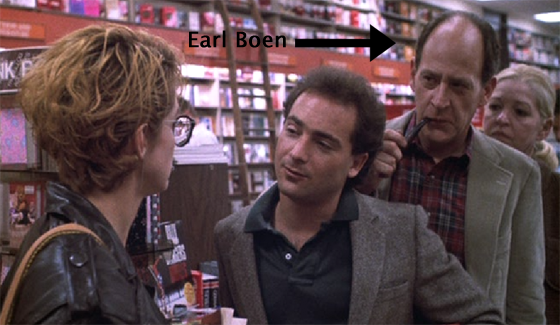 The episode is #5, “But Not for Me,” and he plays an imaginary psychiatrist who pops into the scene for about twenty seconds to dissuade Melissa from going home with a jerk she met in line at the bookstore. The episode aired in 1988, so it was almost a decade before Boen started playing LeChuck in the first talkie Monkey Island game, Curse of Monkey Island. Still, playing the scene a second time, I can totally hear LeChuck in his voice. I do wish he’d thrown in a “har har har” though.

That’s all. Continue wasting your lives. (Herskovitz / Zwick reference… anyone get it?)

*No, that’s sort of a lie. Just a few weeks ago I learned that the voice of one of the students in Gray Matter is done by the guy who plays Manmeet in Outsourced, but I didn’t notice it while I was playing. Also, I’m kind of embarrassed to admit that I watch Outsourced, so it was a bittersweet discovery.

Yes Rosy, there is a Santa Claus!

Gray Matter — something to look forward to