Haven’t felt much like blogging lately. Case in point: my tomato and pepper plants have gotten much bigger since I last posted pictures a month ago. In late April / early May we had some crazy hot days and the tomato plants shot up. Here they are on May 4, roughly four weeks after planting. 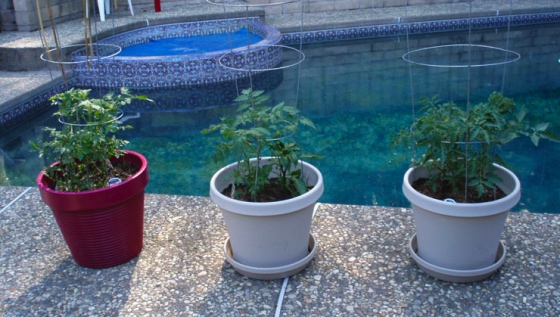 After this we had a few more weeks of crazy hot days and they got even bigger. Then the rain came. Last year, wet days and cold nights triggered the blight that killed off my plants. I pulled the two white pots onto the deck where they’d be covered. The pink pot, which has bamboo sticks attached to the tomato cage for when the plants get big, wouldn’t fit under the deck roof. I pulled it under the eave of the house, where it was drier than out in the open, but not completely protected. And it rained for three days straight.

Wednesday the sun came out again and yesterday I noticed black spots on the leaves of the Sweet Pea Currant plant. That one is the smallest and most delicate of all of them, but it’s also (so far) the most prolific, with a ton of flowers and a few clusters of tomatoes growing on it already.

I picked off all the branches that had spotty leaves (which were fortunately all non-productive branches that eventually would have been pruned off anyway—nothing with flowers) but today I found a few more. I’m not sure if the problem is spreading or if I missed them the first time. The other two plants in the pot don’t seem to have the same problem but last year it spread from one to the other. I have my fingers crossed that the rain won’t come back and the blight (if that’s what this is) will go away on its own.

Here’s the tomato height as of yesterday. Plants in all three pots have cleared the cage’s second rung! 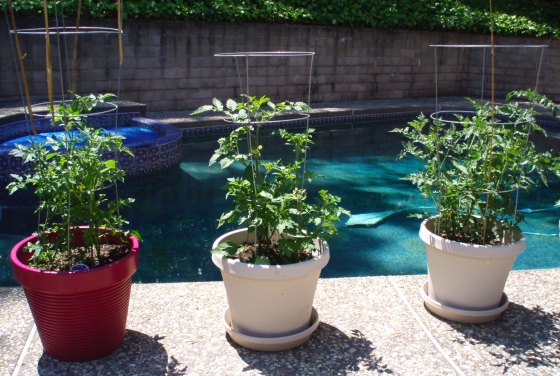 The pepper plants are growing well, too. As of this week, the Anaheim and banana peppers are bearing fruit, and the cherry and inferno peppers look close. On Mother’s Day I bought a habanero plant and a “super chili” plant (I couldn’t find any of the Caribbean red chilis that I wanted). The super chilis already had several peppers growing on it when I got it, so that’s cheating a little. The habanero is small… I wouldn’t be surprised if, like in past years, it’s late summer before we get anything worth eating off that one.

Unfortunately my Swiss chard got infested with little black bugs (I think flea beetles, but I’m not sure). They weren’t eating the leaves but there were tons of them hanging out on the undersides of the leaves and it grossed me out enough that I lost my appetite for Swiss chard. This coincided with the first streak of hot weather and the leaves were wilting from the heat anyway, so I scalped the plants and am hoping they’ll grow back sans bugs. If not, well, it was nice while it lasted.