A couple of weeks ago I saw something odd on eBay and, well, I had to have it. It’s a half scale cottage (I think named the Gull Bay) that seems to have come from a 1980s class taught by Jackie Kerr Deiber. The shell is already sided and assembled and it came with everything in the picture—windows, shingles, porch posts, etc. I paid $100 for the lot, which seemed like a killer deal even if I didn’t need it. 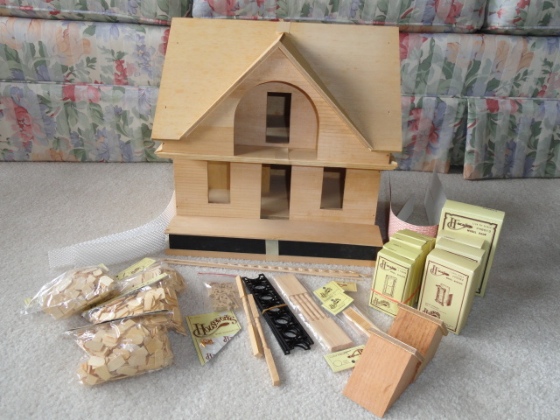 So here’s the odd part. This house is fully enclosed, and slides apart. I like the idea of it, especially if it’ll keep the dust out, but when it’s closed up it’s practically impossible to see the furniture inside. And sliding the pieces apart just to look at the inside seems impractical. (Can we say earthquake?!) 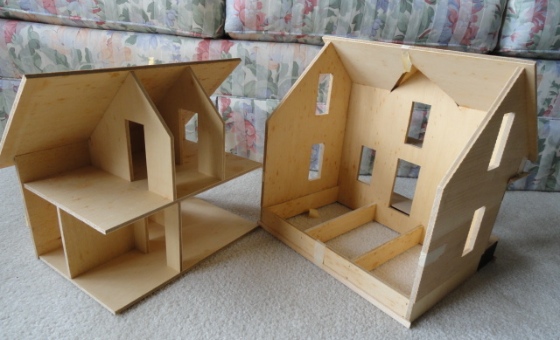 Here’s a photo of the finished house that came with the kit. The ’88 in the lower left corner is what makes me think this class was taught in the 1980s. The paperwork that came with it implies that the shell came assembled and was brought into the class for decorating and finishing. Maybe the lady I bought it from never made it to class? 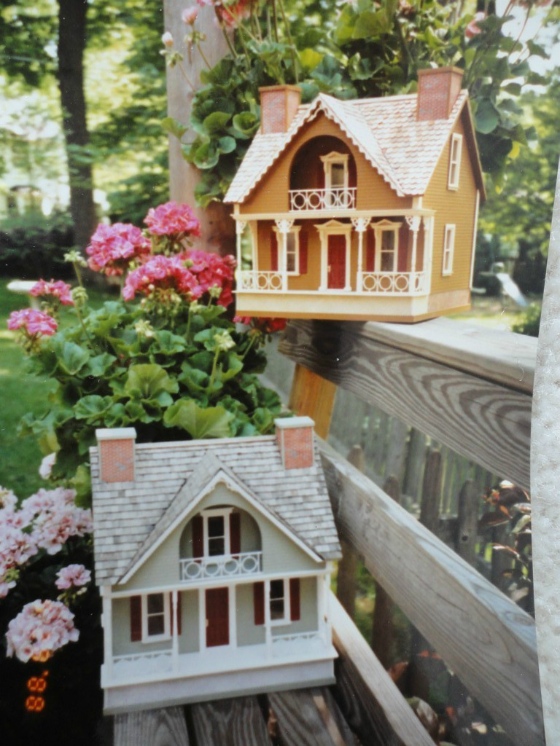 The eBay seller included a handwritten note on my invoice: I hope you have fun with this kit. My friend is in her 80s and after 40+ years of doing miniatures she’s got too many “someday” projects. Her kids want her to clean out and I have the job of helping her. I know she’ll be happy that this house will get finished. (Hmm, too many “someday” projects? I’ve never heard of such a thing…)

Here are some more pics from other angles. You can see into every room through at least one window. 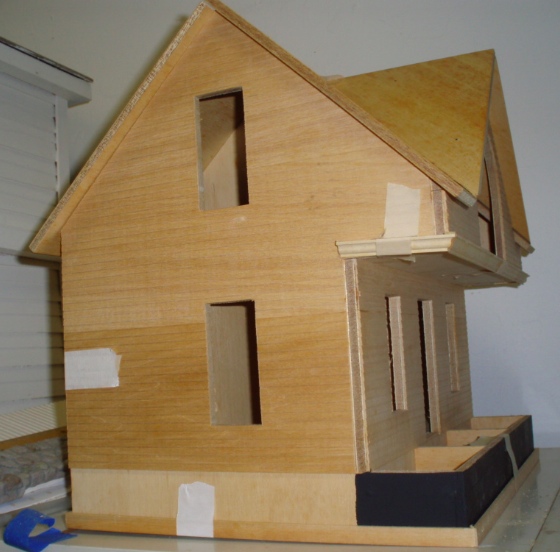 The back wall isn’t quite as wide as the rest of the frame, which allows it to slide in and out easily, but also leaves cracks at the sides. These will be hidden with corner trim, which also came included. 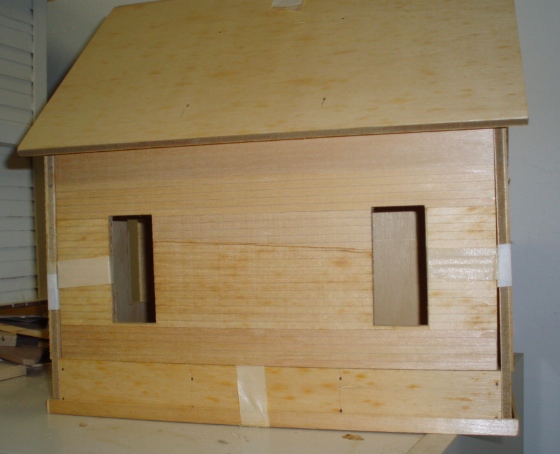 Here’s the front part with the back removed. The bottom under the foundation is open. Since the enclosed house is pretty dark inside, I might strategically place fluorette lights so you can’t see them through the windows. If so, they’ll have to be connected to this part of the house, with the wires hanging down through the foundation, and positioned so they don’t get in the way of the part that slides out. 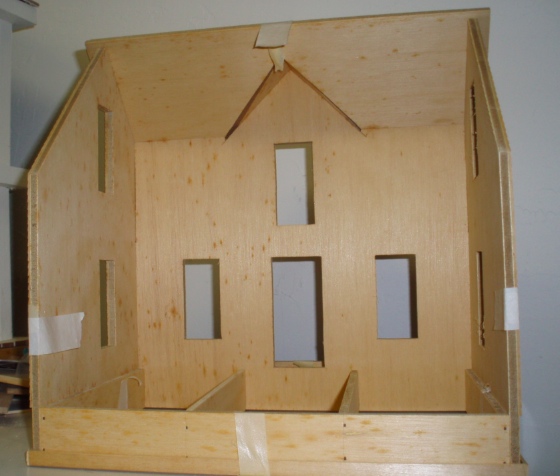 The layout is kind of odd, too. I’m curious how the rooms were intended to be used because they’re all fairly small and narrow. The downstairs room on the left is tiny, maybe meant to be a bathroom, but I think I’ll use it as a breakfast room. The room you enter into, which is L-shaped, will be the living room, and the back room will be the kitchen. Up top, the rooms on the sides will be bedrooms, with an office/library sort of area in the middle. 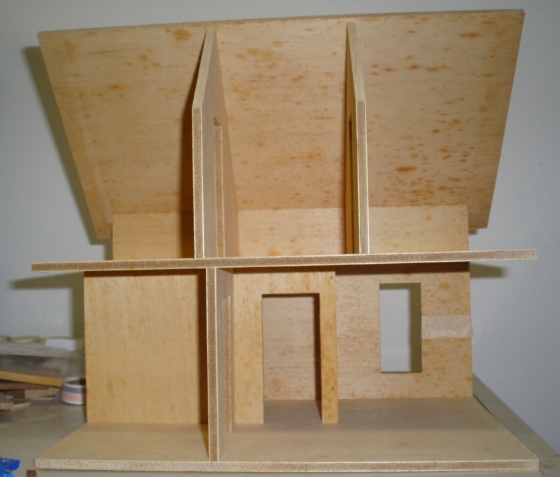 Another view. I do like that the house has depth and the rooms have atypical shapes, it just sort of seems wasted if the house will be closed up all the time. But maybe it’s all about creating the illusion of a “real” house? 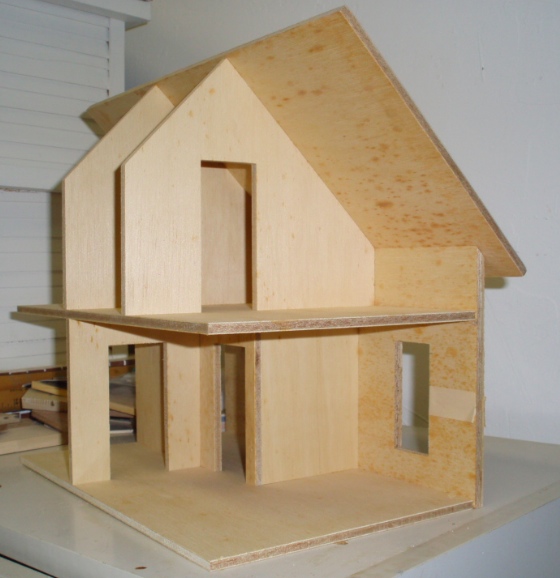 This view shows the small (breakfast) room on the right, and the back room (kitchen) on the left. I’m not sure if I’ll be able to light the back room, since the bulb would knock into one of the sliding walls, but maybe I can figure something out with a battery operated light there instead. 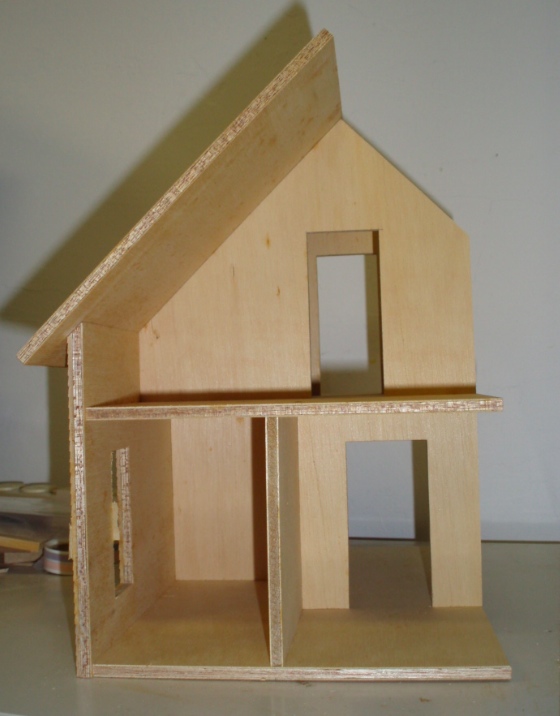 Since the house will be closed up most of the time, I’m going to take this opportunity to use some of my Avon and Popular Imports resin furniture. Years ago I went on a jag buying half scale resin furniture but I don’t use much of it, because it looks fake alongside “real” furniture. In this house, where it’s hard to see anyway, it seems like it’ll look just real enough when you peek through the windows. 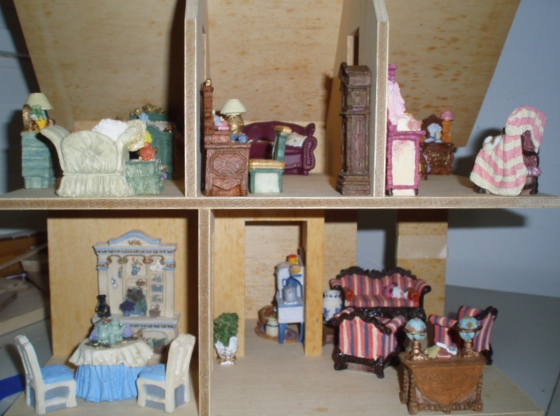 I don’t think I’ll glue the furniture down permanently, but I’ll probably secure it with wax so the house can be slid apart without knocking everything over. 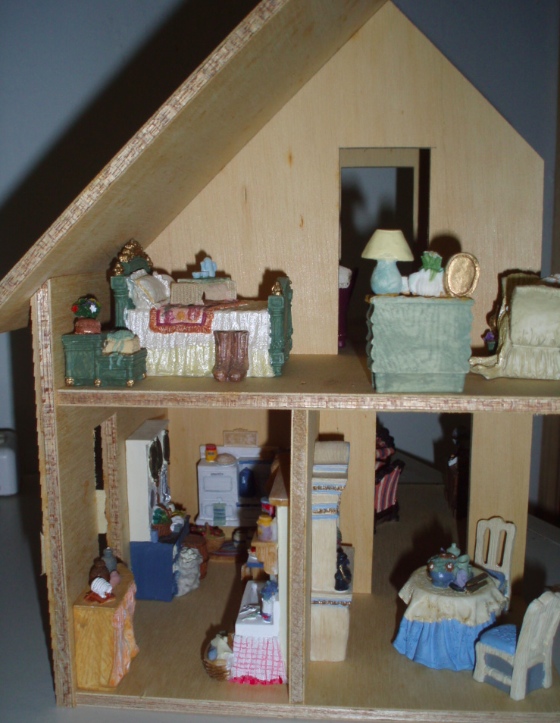 Since it’ll be hard to see, I’m not going to go crazy decorating the interior. I’ll probably use plain white paper on the walls to help lighten up the rooms. Rather than laying hardwood floors, I might try staining the floor and scribing floorboards, something I’ve never tried before because I’m horrible at drawing straight lines. (Yeah, we’ll see!) 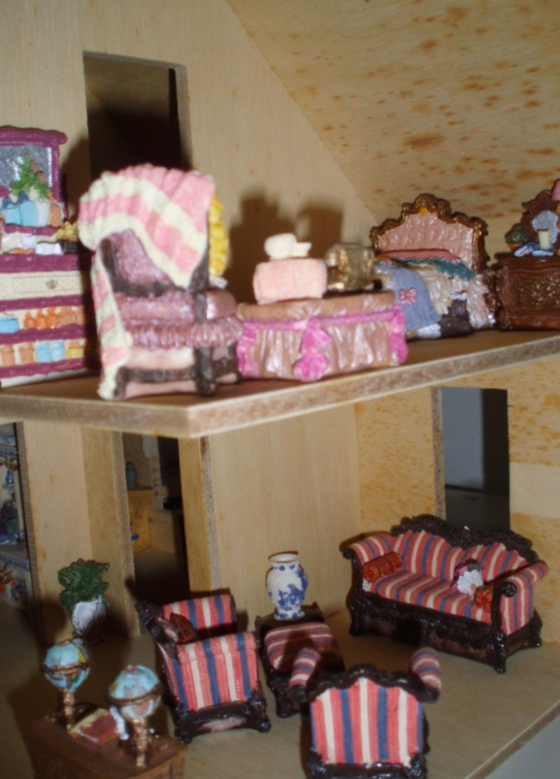 Here’s the front of the house with the windows in place. The door is a regular Houseworks Victorian door but with the pediment lowered. I’m not a fan of the skinny window at the top of those doors but I never thought to remove it. I think it looks much better this way, more consistent with the windows. 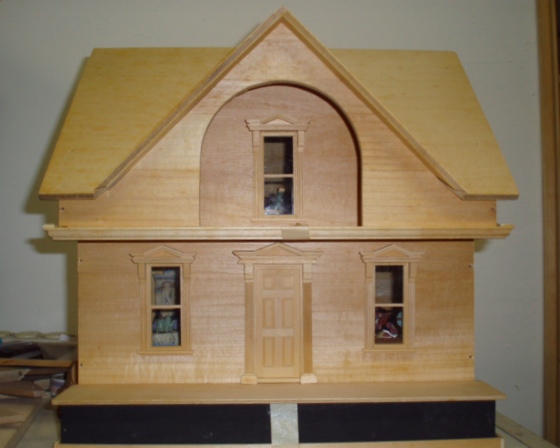 Another “with window” shot. For the paint scheme, I’m thinking yellow (I got a free can at Ace Hardware!) with white trim and red accents. 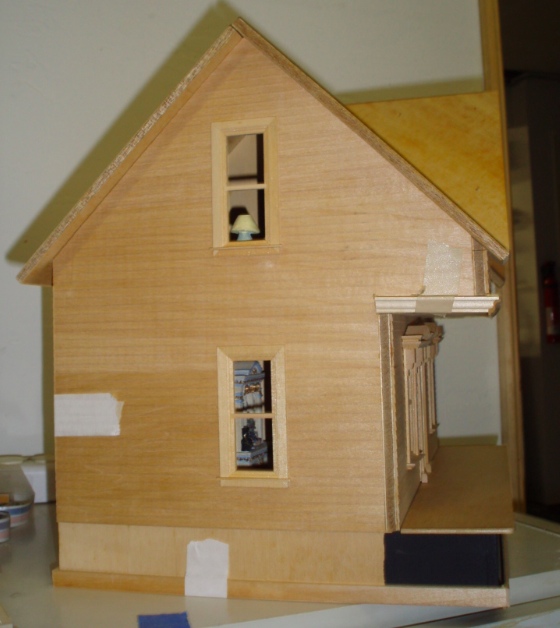 This house came with pretty much everything it needs and I have plenty of furniture to fill it up, so I don’t plan to spend much on materials. (That’s how I justified the $100 impulse buy…) However, I just bought this apex trim for my Queen Anne Rowhouse and it didn’t quite work, so I’ll probably use it here instead. 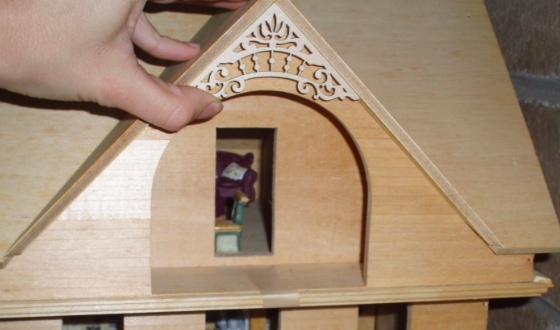 Another idea is to add dormers to the front instead of the chimneys that came with the house, to give another view into the bedrooms. It looks kind of busy, though, and the dormer would have to be really high up to fit next to the gable. 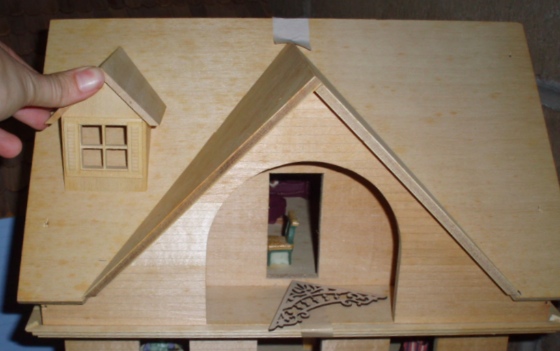 Instead, I might add dormers to the back roof. If the house is going to be enclosed, the back might as well have some visual interest! I have one of these dormers already, so if I end up doing it I’ll just have to buy one more. (Or two, so there will be one looking into each room.) 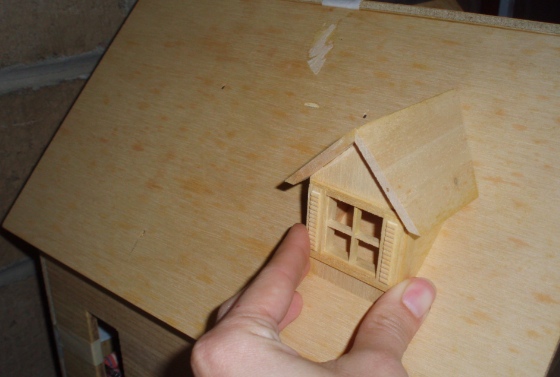 Anyway, this is a “someday project” that I won’t be working on just yet! I’ve made some progress on rowhouse shingles and wallpaper the past couple of weeks, pics coming soon…