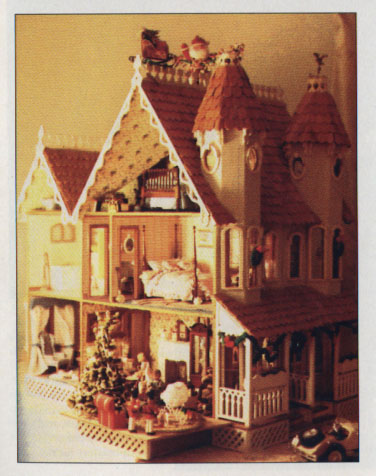 Eons ago, I saw this picture in a Nutshell News from the 80s or 90s, of two McKinley dollhouses built back to back.* It always stuck with me as a really cool bash and I wanted to try it, but with the Victorianna — the half scale version of the McKinley, which has been out of production for a long time.

(I actually owned a McKinley for a while that I bought off Craigslist intending to rehab it, but never got very far with it.)

For a while Greenleaf talked about bringing back the Victorianna… it never happened (I don’t know why) but they did do a limited run of “select” Victoriannas in 2008 that they never sold. I was given one as a thank you for being a forum moderator. Greenleaf’s select houses are die cut (not laser cut like Greenleaf’s newer kits) but use birch plywood — much nicer and less splintery than the typical luan plywood. I put the kit on the shelf, hoping that they would someday rerelease it so I could get a second and embark on my back-to-back bash.

Then last fall someone posted a few Victoriannas on eBay — unopened, “new old stock” from a mini store that went out of business — and I was lucky enough to nab one. I was planning to dive in on the Little Belle next and have actually been stocking up on furniture for it, but the Victorianna started calling my name. So last week I pulled out the kits and started playing around with ideas. 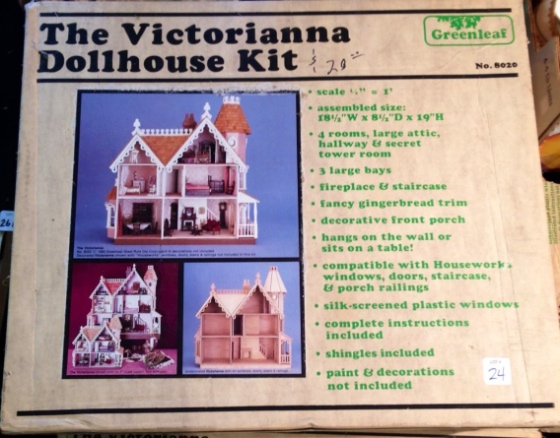 Here’s my dry fit. the house on the left is the select version (built right-side-out), and the one on the right is the luan plywood (built in reverse). The Victorianna is meant to hang on the wall, so it’s open on one side and the other side is completely flat. 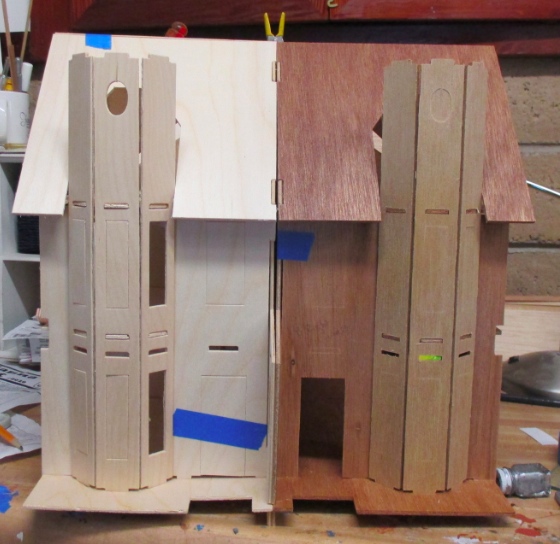 Unlike in the Nutshell News photo, which has two separate entrances, I’m planning to do this as one big house. Initially I was thinking the front door would go on the right, so I punched it out, but later I changed my mind about that. Even for a row house, I feel like it’s a bit too symmetrical. I might mess around with one of the towers so they end up at different heights (more on that below).

A lot of the ideas are still in my head and might be hard to visualize, but let’s try! Here’s the right-side-out side of the house. The things I’m planning to do that deviate from the directions are to leave out the wall that would normally form the hallway and bedroom, and add a staircase up to the third floor. The room with the staircase in it will be open, a family room or some other communal living space. 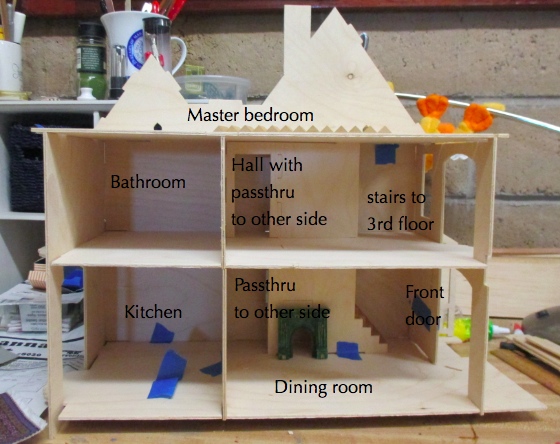 And here’s the mirror image side. This dry fit is missing the wall between the front bedroom and the hall, but I do plan to include that. This side doesn’t need a staircase, so I’m leaving out the fireplace too, which gives a little more space for furniture in the living room. I’ll add French doors between the living room and the office. 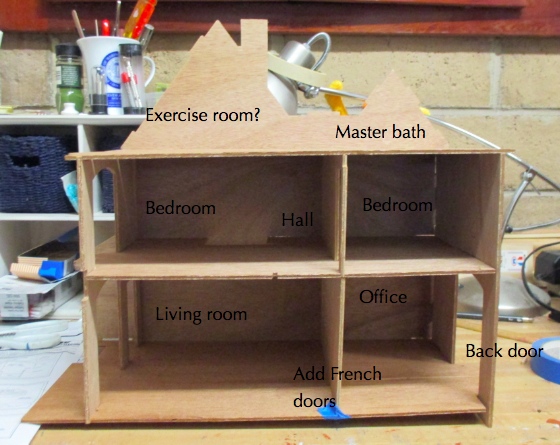 I plan to cut the back walls in a couple of places so the little people can pass from one side of the house to the other. On the first floor, I initially planned to put this at the foot of the stairs, but there isn’t really enough space.

Instead I think I’ll do it to the left of the fireplace, removing the whole back wall to form a sort of hallway between the living room and dining room.

A lot of people have modified the roofline on the McKinley to create more useable space upstairs, by making a flat roof that goes from the top of the smaller peak until it bumps into the bigger diagonal roof. (If you’re not able to visualize that, check out how Tracy Topps did it.) Since the flat portion will be double wide, I could add a rooftop deck with a hot tub. 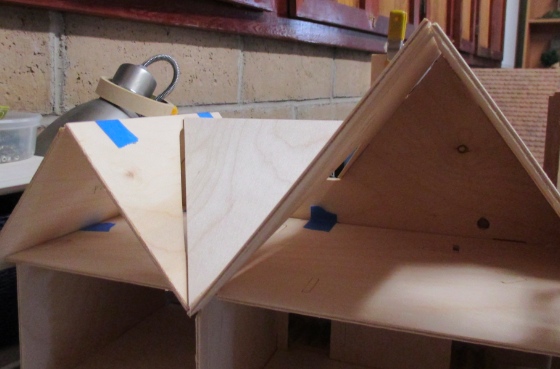 I’m playing around with ideas for the towers and the front roof. Dormers could make the front more interesting. I thought about a triangular dormer between the two towers, but that would put a window right over the seam where the two back walls meet, and I think I need to keep those walls in tact so the roof has something to lean on. But I could add one small dormer on each side, or one shed dormer that straddles the seam but has two separate windows in it. I happen to have two Palladian windows that I picked up for just $2 each, so maybe I’ll find a use for them here. 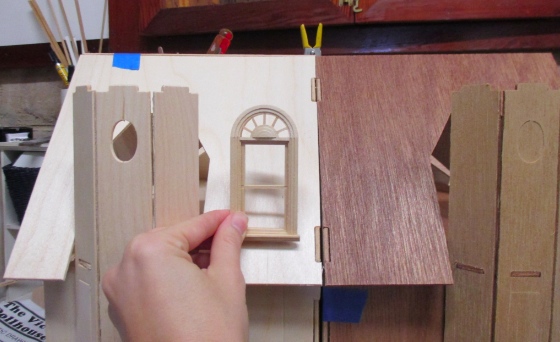 Another idea is to turn one of the towers into a sort of balcony. Maybe I could build a dormer out of this Lawbre 1:12 apex trim in my stash (purchased on sale for $4.50!) and use the wood pieces that normally form the interior tower walls as exterior walls instead (cut down to meet the slant of the roof).

Or, I could close in the roof on one side and get rid of the third story bay window altogether, so the tops of the towers will be staggered. In that scenario I could either add a roof to the top of the shorter bay window, or leave it flat with a widow’s walk type railing around it. 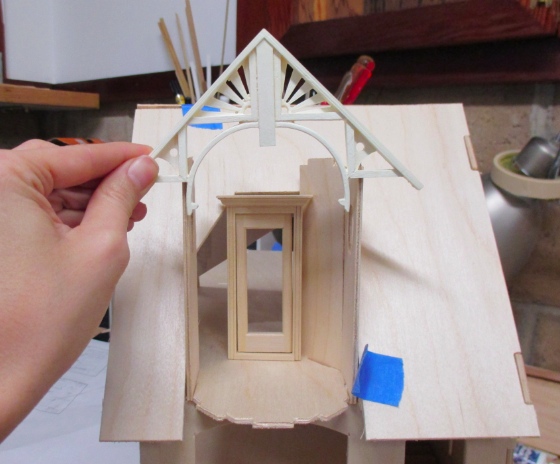 On the back of the house, instead of building the bay window that would normally go here, I’m going to add a back door that opens onto a little deck. Upstairs, I might use this double window from my stash, just so it’s not all boring, flat wall. 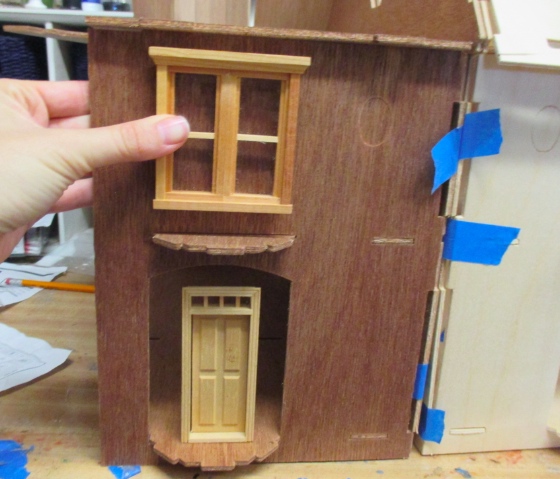 Last but not least, here are the kitchen cabinets I bought to go in this house. This is actually what made the Victorianna start calling my name in the first place — bedMiniatures listed a bunch of half scale cabinets on Etsy, and I couldn’t resist. I plan to add a small square window over the sink, and to cut a new door to the right of the fridge (normally the door for this room is in the left corner). 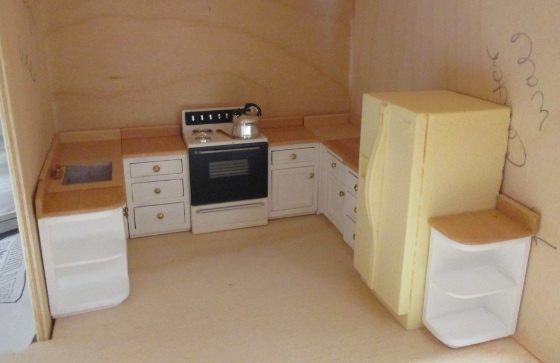 I have to do some more thinking about how I’m going to assemble this house, especially the towers and roofline, before I start cutting or assembling anything. But the wheels in my brain are turning…

*I don’t know which Nutshell News issue the back-to-back McKinley was in, or the name of who built it. If I ever manage to find it in the magazine again, I’ll update this blog with that info.