Update: This project was so much fun I decided to do more! I’m stitching Thimbleweed Park’s cast on an afghan and hope to post a chart for each character. Get them here!

I rarely post about my day job on the blog, but I do contract PR for video games, and I have been working on Thimbleweed Park on and off since it was Kickstarted in 2014. Recently one of the game’s creators, Ron Gilbert, retweeted a cross stitch someone had done of a character from one of his previous games and I thought hey, I can do that! I decided to stitch up Thimbleweed Park’s five main characters and send it to him to commemorate the game’s March 30 release. 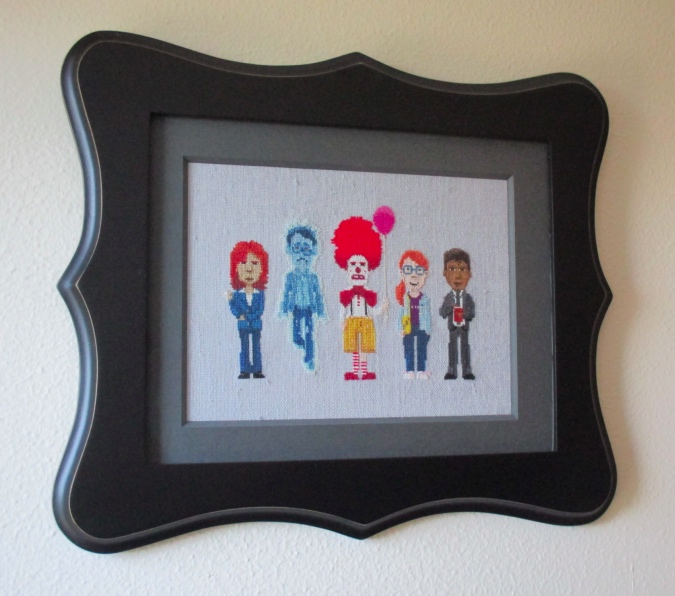 I hid the backgrounds and arranged them in a line-up. In theory, cross stitching pixel art is easy because each pixel equals one stitch, but the Thimbleweed Park characters’ pixels don’t have a one-to-one correlation with the pixels on the screen. (It’s meant to look low-res, but it isn’t really low-res!) I reduced the image using the “nearest neighbor” filter in Photoshop to retain the hard edges, and then did some manual touch-ups on spots that looked weird after the reduction. 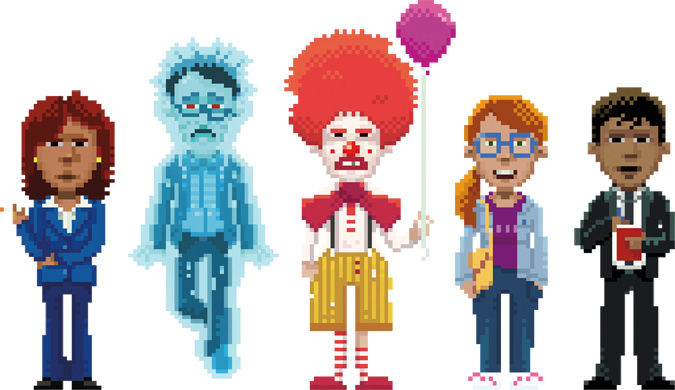 I used a program called KG Chart to convert this into a cross stitch chart. This is the image I imported. It’s 196 pixels wide by 113 pixels high, which looks pretty tiny on a high-res computer monitor. The design is stitched on 32-count linen — that’s 32 threads (and pixels) per inch — so the finished cross stitch is about 6-1/8″ x 3-1/2″.

KG Chart doesn’t seem to understand transparent backgrounds, so I added the bright green background before importing the graphic. Since that color doesn’t show up anywhere else in the design, I was able to delete it from the chart completely to get rid of the symbol that went with it, which was making the chart hard to read.

I had a few false starts before I got the chart right. The Ray on the left would have had brown hair and a green suit. Ransome in the center wasn’t reduced using “nearest neighbor” and the software tried to account for the resulting anti-aliasing with weird colors that only showed up for one or two stitches. The Ransome on the right was stitched over two threads (16 stitches per inch instead of 32 stitches per inch), which would have made the finished design way too big. 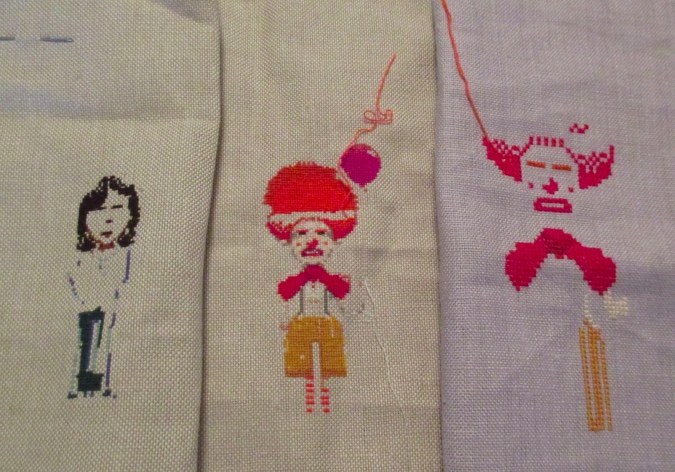 I went back to the drawing board and made a bunch of tweaks to the chart to fix pixel weirdness and colors. (KG Chart tried to match some colors that were close to each other with amusing results — Delores’s face was supposed to be the same color as Ransome’s balloon!) I also simplified the shading in the faces. 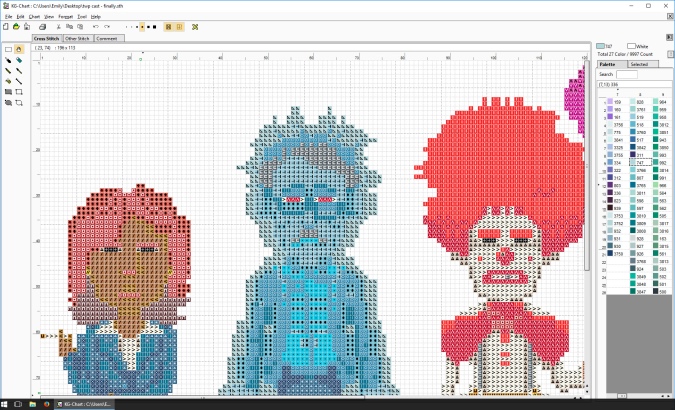 I wanted to post the chart for download when I was done, but even after futzing with it on the screen I ended up making a lot of changes on while I was stitching that I didn’t write down. The characters’ hair and faces were hardest to get right. For some psychological reason if the color was slightly off in their clothes my brain was able to accept it, but if their faces looked wrong they just looked *wrong*. 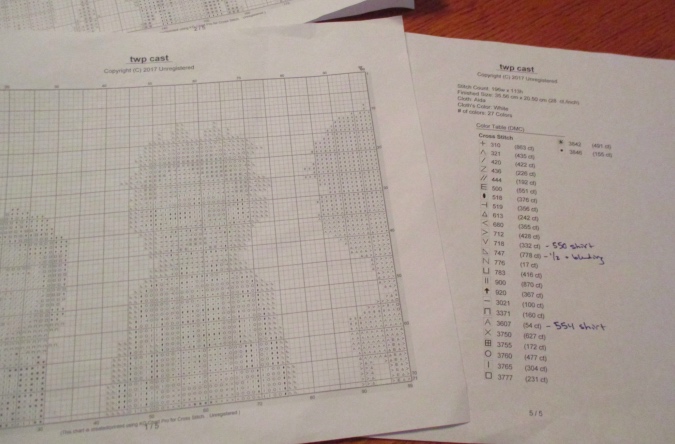 Here’s a scan of the finished piece before framing. Notice how the characters’ heads seem taller in the finished piece than in the chart? I think the linen’s count was uneven, with fewer threads per inch vertically than horizontally, making the stitches taller than they are wide. 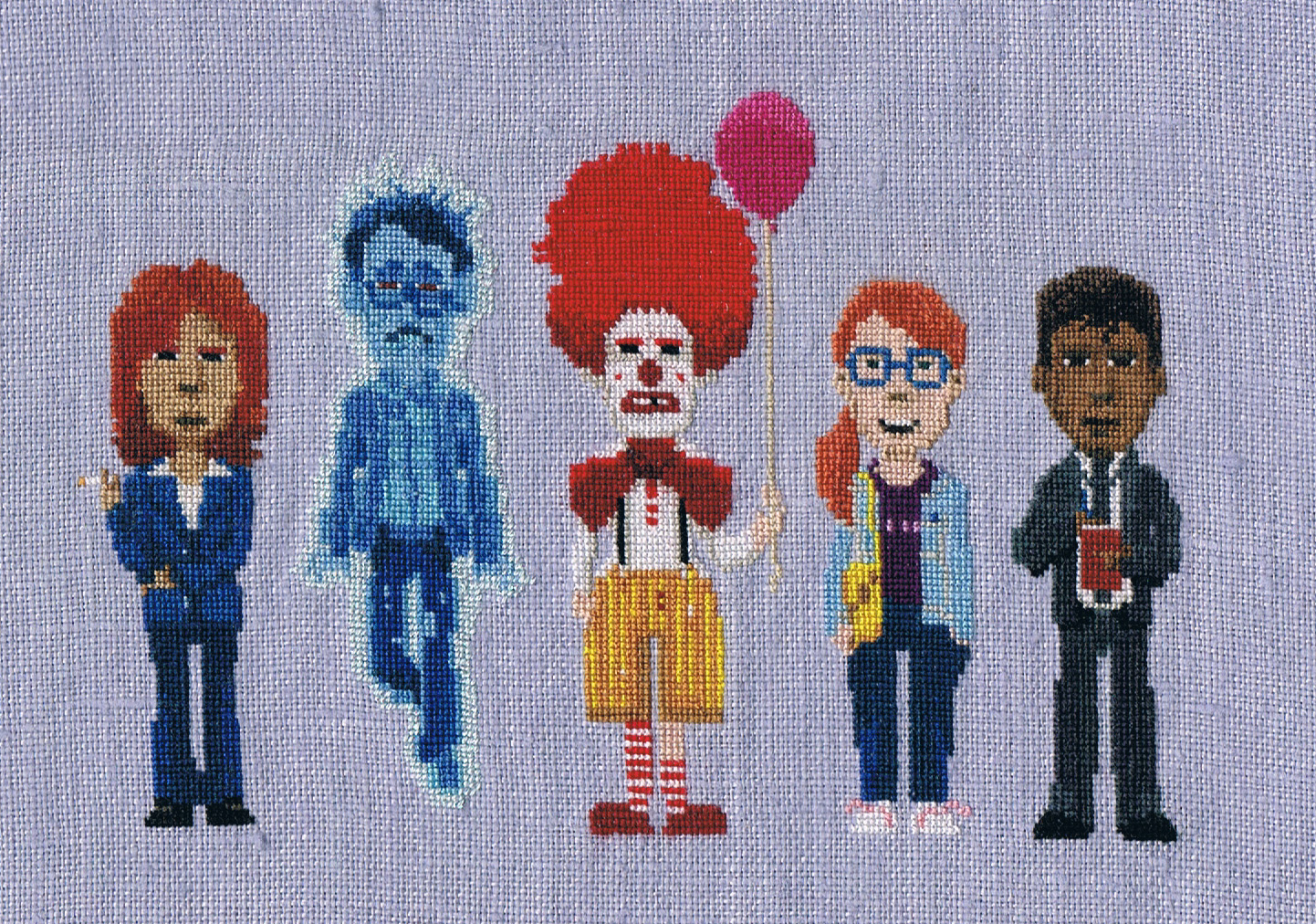 It’s hard to see in the pictures but the “transparent” outline around Franklin the ghost is done with half crosses with sparkly blending filament twisted in.