I took a break from the Victorianna’s master bedroom to get started on the master bath. I cut a side wall from a piece of plywood. It’s going to be a “Jack and Jill” bath with one door leading into the nursery and one into the master bedroom. 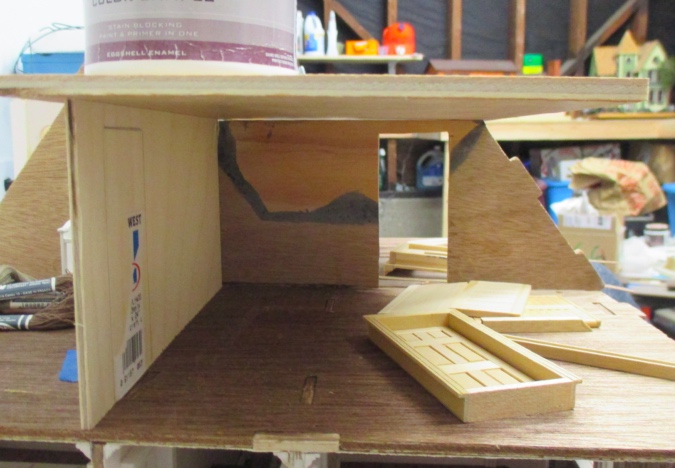 Here’s a mock-up of the furniture placement. I’m putting a soaker tub under the slanted roof. In the opposite corner there will be a shower stall with the same shape as the tub, represented here by a piece of paper. 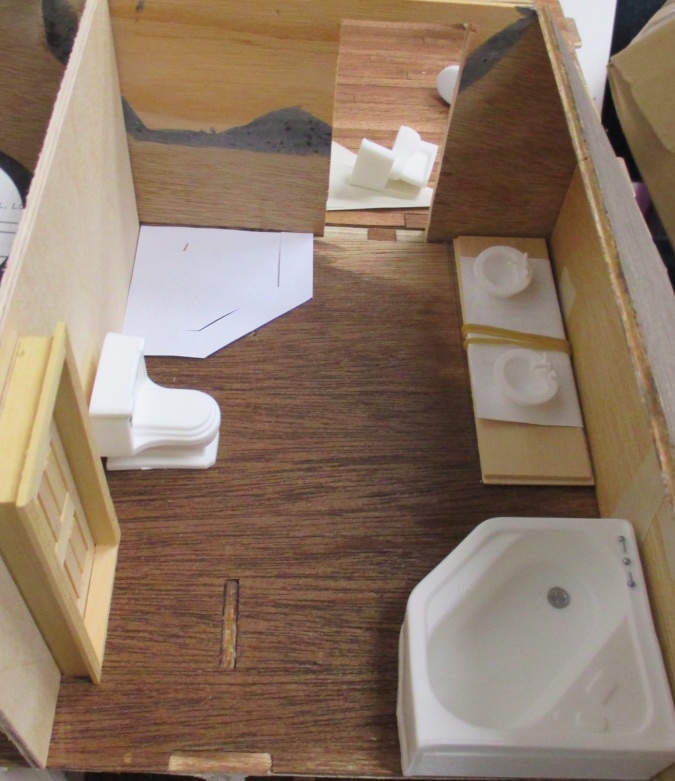 I bought this bathroom set from Atomic Kiki on Etsy. It’s a resin cast of a Marx bathroom set. (She has some retro kitchens in her store right now, also cast from Marx furniture, but from the dimensions they seem to be closer to 3/4″ scale.)

The tub is 1″ tall and the sides that go up against the walls in the corner are 2.5″ long. That seemed large at first, especially compared to this plastic corner tub I had originally been planning to use. But I searched online for dimensions of soaker tubs and found some that are 24″ tall and 60″ along the wall — exactly the equivalent of 1″ x 2.5″ in half scale.

Here’s the toilet with some other (supposedly) half scale toilets. I thought it was going to be too big, but it’s actually a little smaller than the wooden one I’m using in the Rosedale and Queen Anne Rowhouse. The third in size is 3D printed (I’m using it in the downstairs bathroom) and the smallest is this plastic one which, like the matching tub, seems a bit too small for half scale.

I’m not sure yet if I’ll use the Atomic Kiki toilet in this bathroom or not. This house is pretty modern and Marx furniture is very 1950s. I don’t think the tub looks too retro, but the toilet might.

But enough about toilets! I wanted to do the floor with large subway tiles, and after my disappointing experience with the printed tiles in the Victorianna’s other bathroom, I’m avoiding printies. I looked at real mosaic tiles intended for backsplashes and decided on these mother of pearl tiles. The dimensions are 3/8″ x 3/4″ (comes out to 9″ x 18″ in half scale) and they’re only a few millimeters thick. 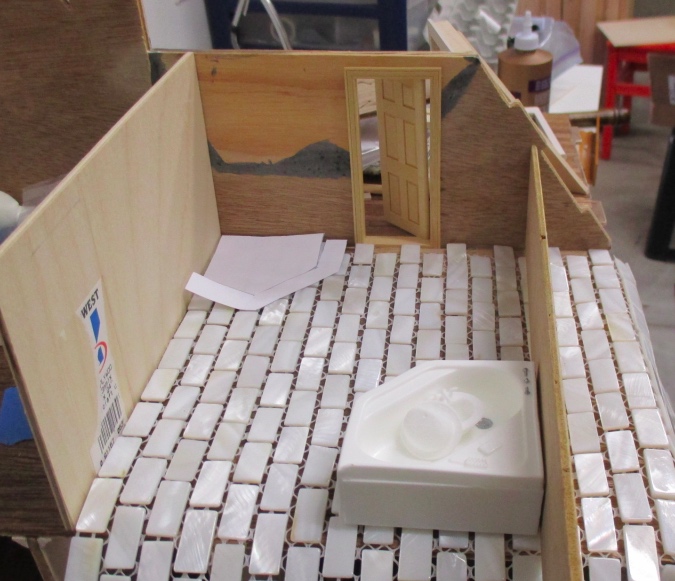 I bought these from JablonStudios on Etsy, and the experience was a little weird. They were supposed to be loose, and I ordered 6 oz, which would cover a 6″ x 12″ area. The shipping date came and went, so I emailed the seller for a status update and got no response.

A few days later a package showed up (still never marked as “shipped” on Etsy) and it had a 12″ x 12″ sheet of tiles inside, mounted on mesh. That’s not what I ordered and I never did get a response to my query (although, a few days later the seller marked the item as shipped). But I got twice as much as I paid for, so I guess I can’t complain…?

Luckily they peel easily off the mesh. There is some glue residue on the backs but it doesn’t get in the way. It could probably be cleaned off but I didn’t bother. 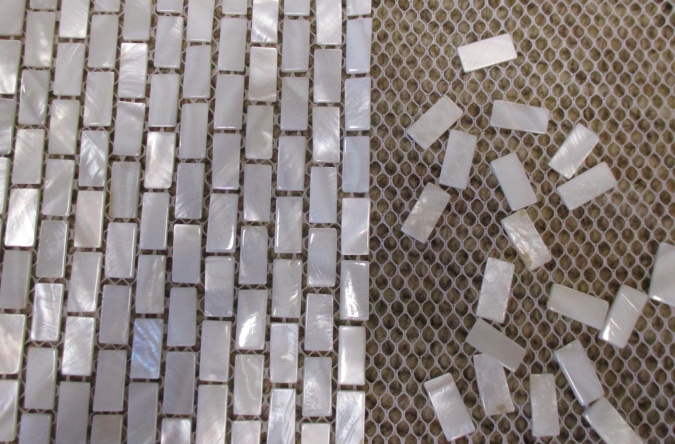 Before I started tiling, I added a knee wall under the sloped part of the roof. This is a scrap out of one of the Victorianna kits that I cut down to the right size. It’s from the stair riser I didn’t punch out. I used the “bad” side of the wood facing into the room, since the cut-out lines aren’t as deep, and I added some wood filler to fill in those lines — otherwise the outline of the riser might show through on the wallpaper.

I cut triangular pieces that match the slope of the roof to go at the sides. The one on the left will show; the one on the right is just for added stability.

I didn’t glue in the other wall yet. This way I can tile as much space as I want the room to be without having to cut the tiles down to fit in a predefined space. Once the tiles are finished, I’ll add the other wall snug up against the tiled edge. 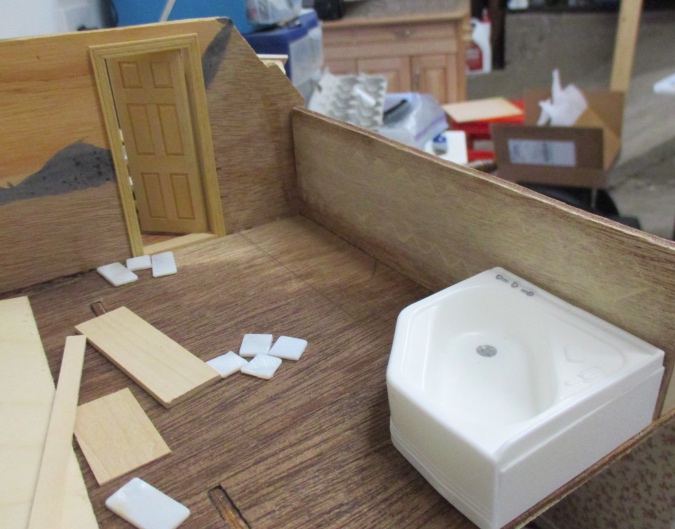 The tiles on the mesh were separated by a 1/16″ gap, which seemed much too large. I tried using a piece of scrapbook paper as a spacer but the tiles kept moving around so I ended up eyeballing it. When I finished each row, I put a straight edge (it’s a piece of channel molding) up against the back wall to make sure the row was straight. 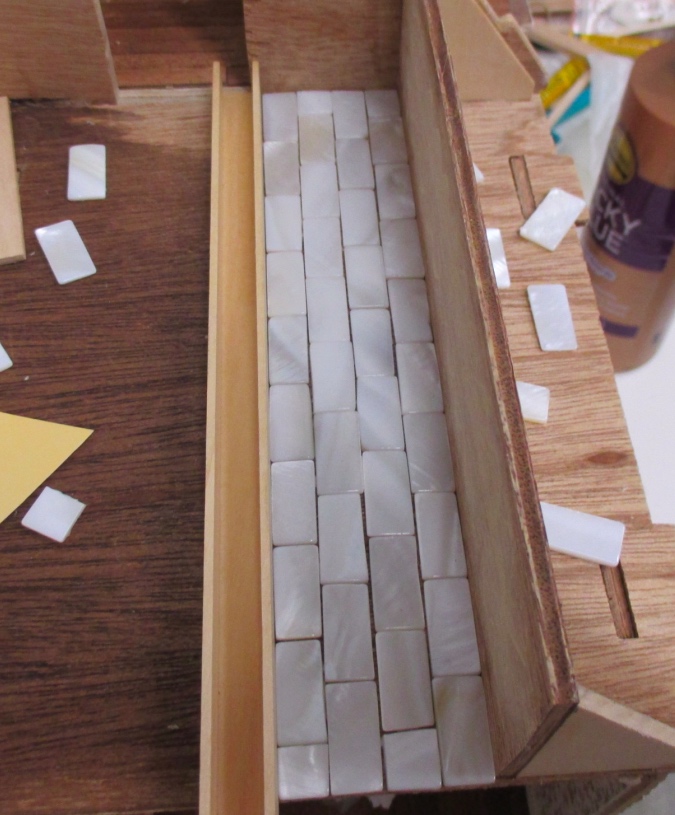 To avoid a repeat of the crooked kitchen floor incident, I measured the width as I went along to make sure my rows were straight. I cut the half tiles with my Easy Cutter. Some cut easily and some don’t — I assume that has to do with the mother of pearl material (something like cutting with or against the grain). Luckily I don’t have to cut too many of them. 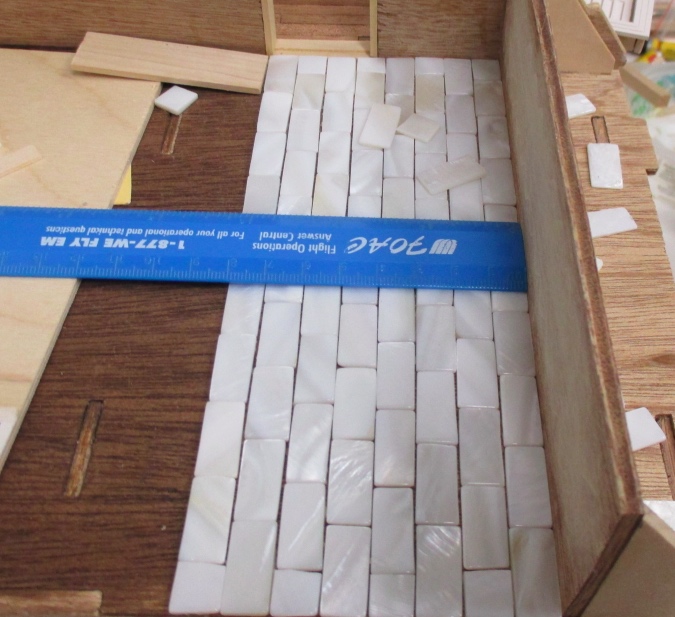 As I worked on this, I got concerned about how I would cover up the tiles at the edge. If you’re looking at the tiles from the top they look fine, but from the side it’s obvious that they’re out of scale. Technically the tub should be sitting on the floor, not on top of a layer of tile, and the thickness of the tiles calls attention to this. I also didn’t like that the side of the tub is visible — it’s nicely cast, but not perfect, and it shouldn’t be the first thing you notice when you look at the room. 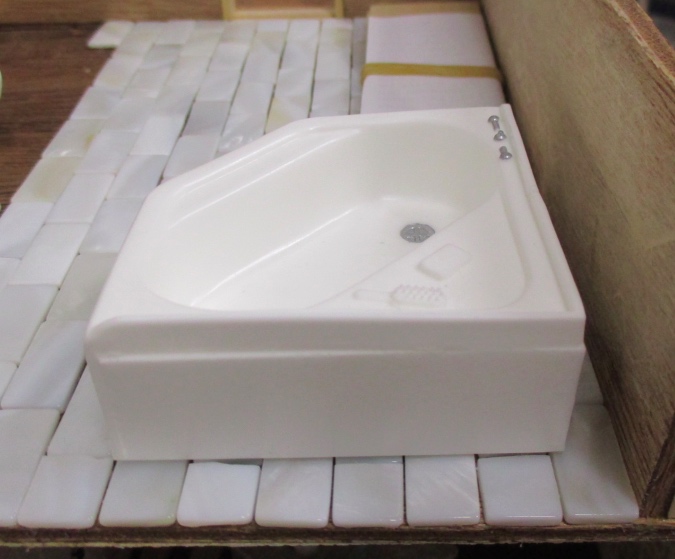 I decided to add a small wall here for the tub to butt up against. I wanted it to be shorter than the knee wall so it doesn’t block too much of the room. This window punch-out from one of the Victorianna kits is the perfect size. 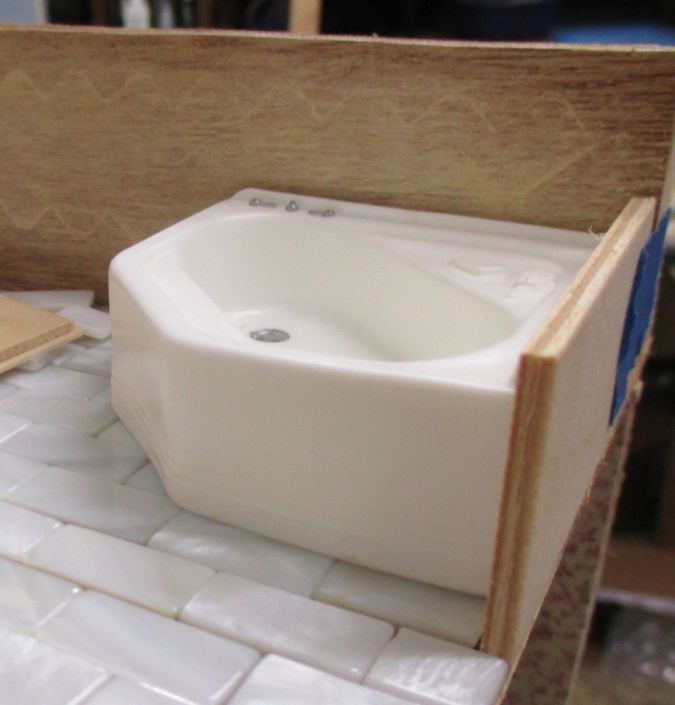 I cut back the tiles here so the wall can be flush with the edge of the floor. Since these will be covered up by the tub, I didn’t bother trying to cut down “smaller than half” tiles to fit in those little spaces. 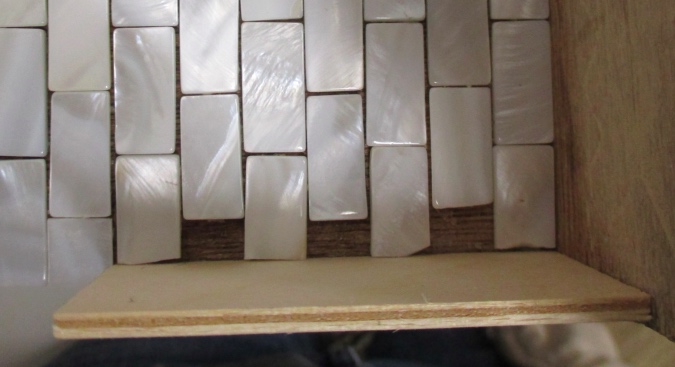 Here’s the room mostly tiled. The grout lines aren’t totally consistent. I’m planning to use white grout, so I hope it won’t be too noticeable. 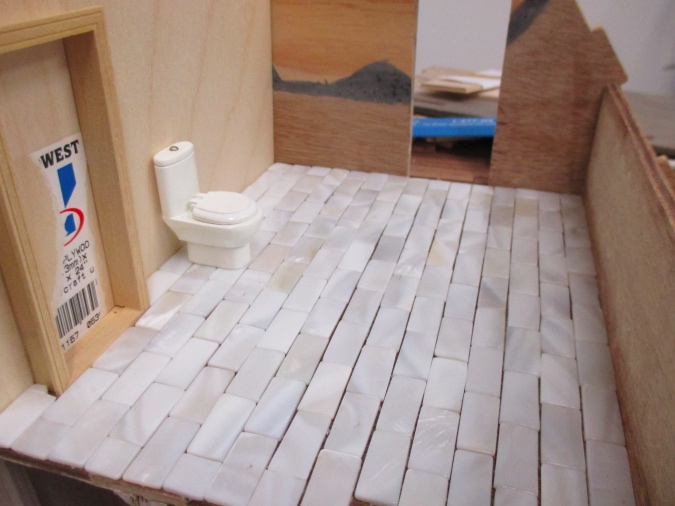 The door won’t stick out this much. I wanted to wait to cut the hole until I knew exactly where it needs to be. The two tiles directly in front of the door will need to be slightly narrower to accommodate the door frame — I think I can do that by sanding them with the disc sander.

Here’s a look at the room with the Rosedale’s vanity in just for kicks. I’m planning to make a longer one for this room, to use up more of the available space, with 3D printed sinks from MiniEtchers. The shower will also be scratch built. 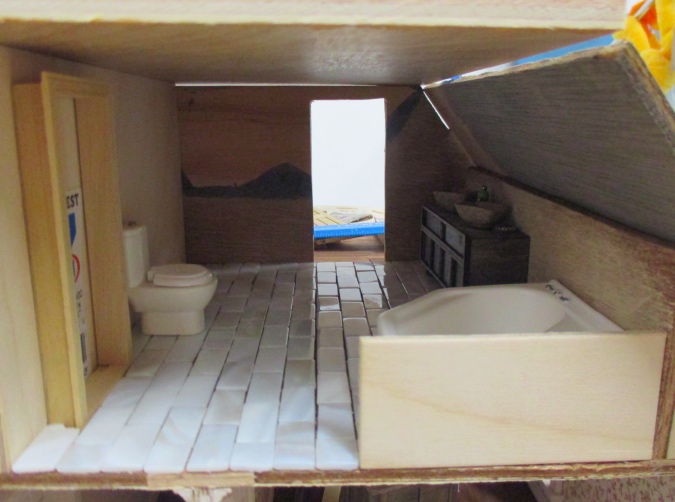 The room looks dark with the roof in place, but I’m planning to add big windows that should solve that problem. These are large Cottage Windows from Dollshouse Emporium. 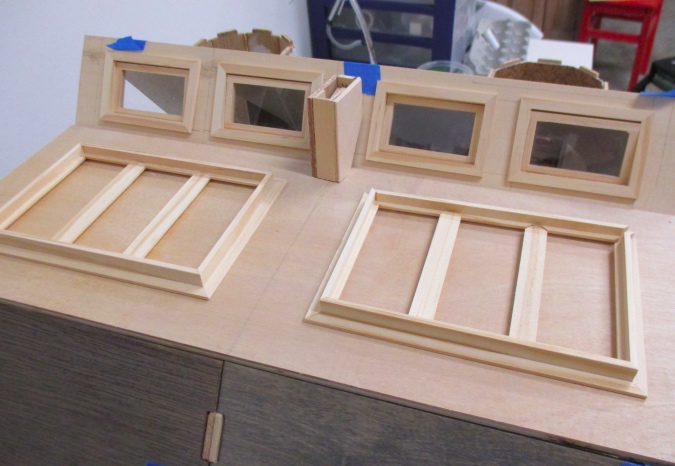 The main goal is to add light, but they’ll also give a nice bird’s eye view into the bathroom. 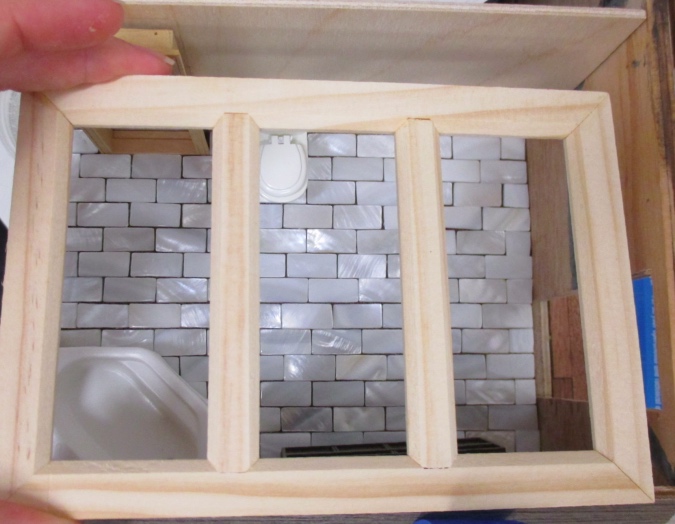