The master bath and nursery are on hold while I wait for some supplies, so I’ve been working on furniture for the master bedroom. This bed is 3D printed from Shapeways. I’m not sure how you’re supposed to put in a mattress with that open bottom. I’ve made beds before, both scratch built and from kits, and the bottom typically has slats to hold the mattress. I cut some 1/8″ x 1/8″ basswood to serve this purpose. 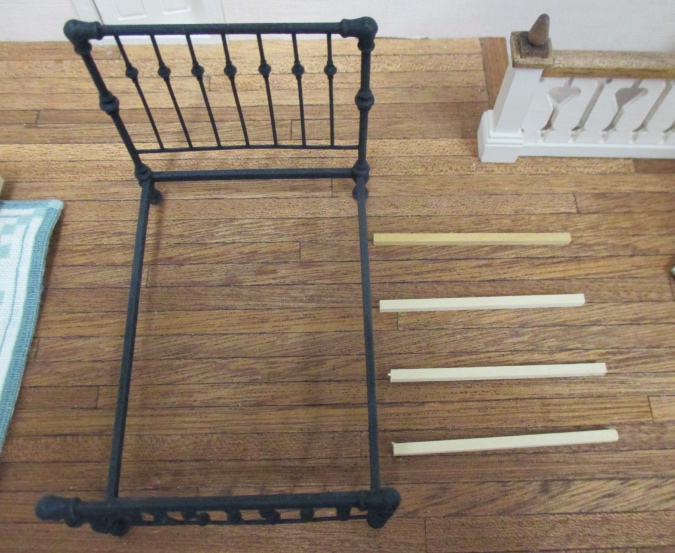 I painted them black before gluing them in. Tacky Glue wasn’t cutting it so I used Quick Grip, which bonds quickly but is also super messy. Luckily these joints will be covered up. I only ended up using three of the four pieces I prepared, and they’re not evenly spaced, but you’ll never see them so who cares? (Not me!) 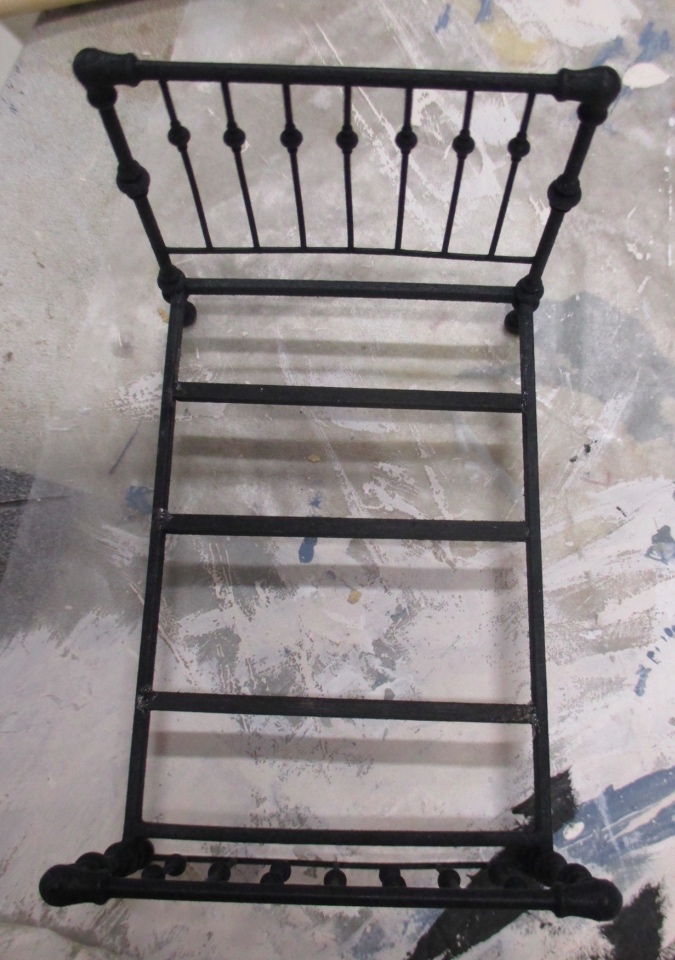 I made a simple mattress by gluing a thin piece of foam to basswood, and then covered it with white cloth. I’d hoped to use a “Sally’s Ring” quilt I stitched a few years ago, but it’s literally one row of stitches too large to fit on the bed. Instead, I made bedding from two Restoration Hardware fabric swatches. 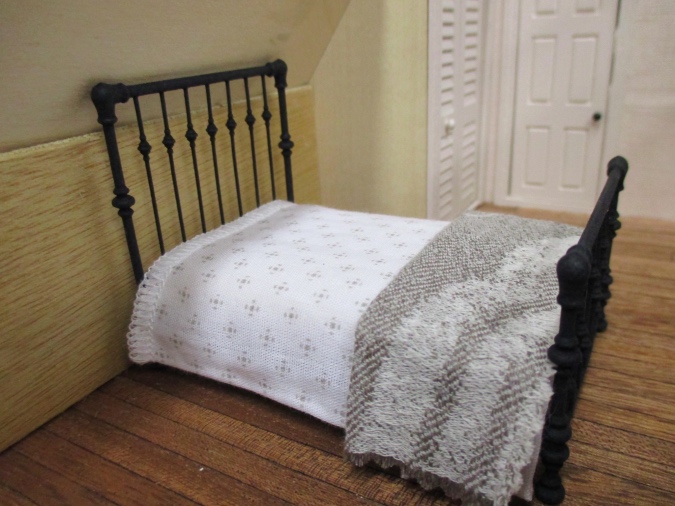 The comforter is Petite Foulard Bedding. I glued the hems on three sides, using the design to maintain straight edges. The stitching at the top was the bottom edge of the swatch — it came that way.

The blanket at the foot is made from Italian Vintage Baroque Bedding. I unraveled the edges a bit to look like fringe. I still need to sew some pillows for the bed, plus I have just enough of the Baroque fabric left over to make a few throw pillows.

I painted them black with Tuscan Beige tops. I’m planning to do a marble effect on the tops and also paint the pulls silver or gold or copper. 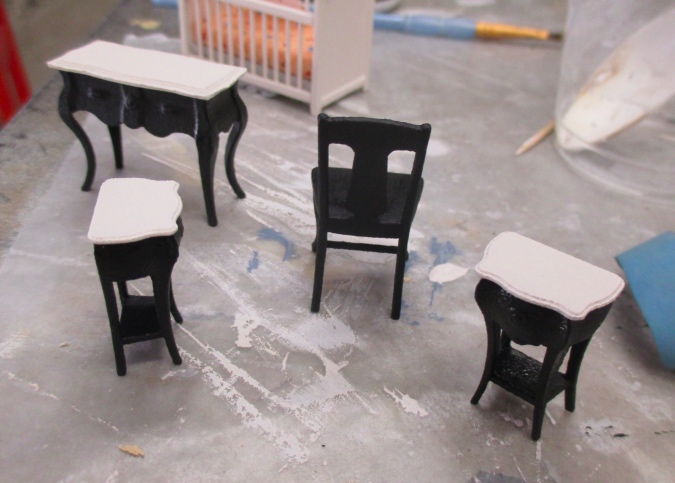 This comforter doesn’t tuck in to cover up the bottom of the mattress. I want to put a piece of furniture at the foot of the bed to make the mattress less noticeable — either an upholstered bench or a blanket chest. 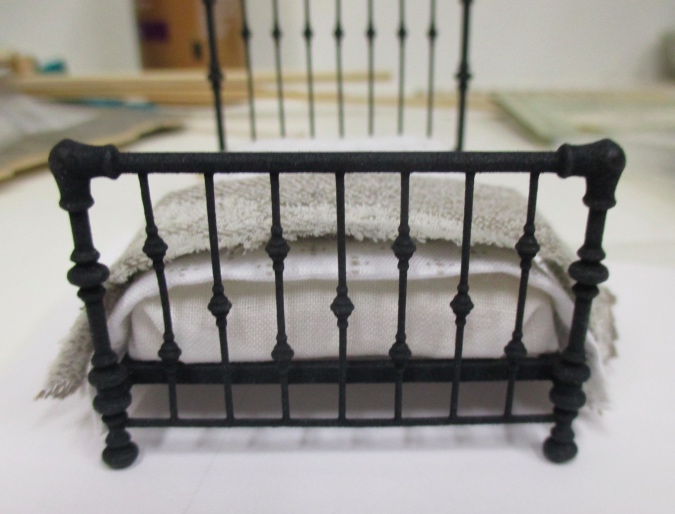 Looking at pictures online, I saw some upholstered benches with tall arms like this and those proportions stuck in my head. I made this without comparing the measurements to any real furniture. In general I like it, but the arms seem too tall. 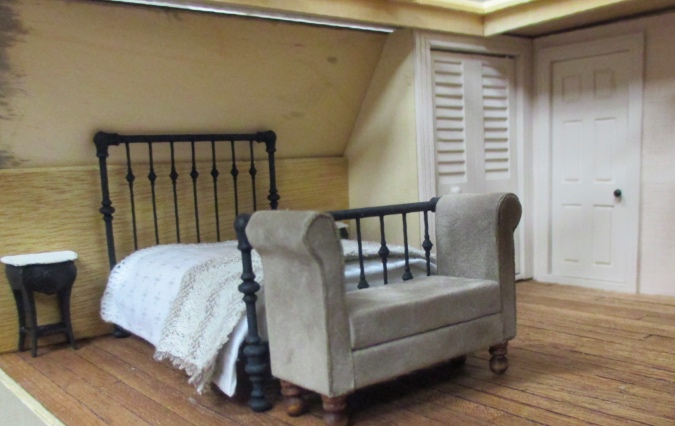 Even after adding bolster pillows, I still felt like the arms should be shorter. So I made another one!

(These are similar to the sofas I made for the Victorianna’s living room — this post has details. To keep this one from getting unwieldy, I wrote up a tutorial for the benches in another post.)

The bench with the shorter arms looks cute at the foot of the bed, and mostly hides the mattress. 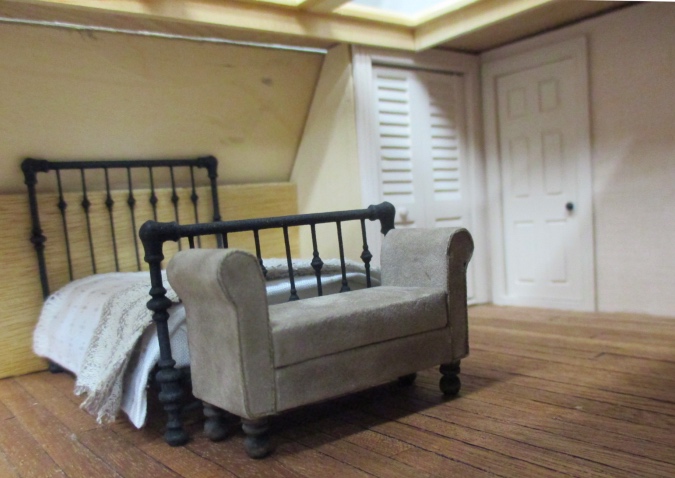 Or I could place it against the railing. 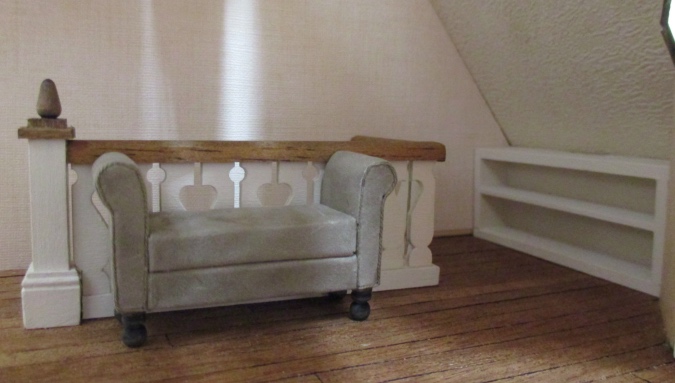 I have a hump-top trunk kit that I want to assemble for this room, and it could also go at the foot of the bed. Once that’s built I’ll decide which looks better in which spot. 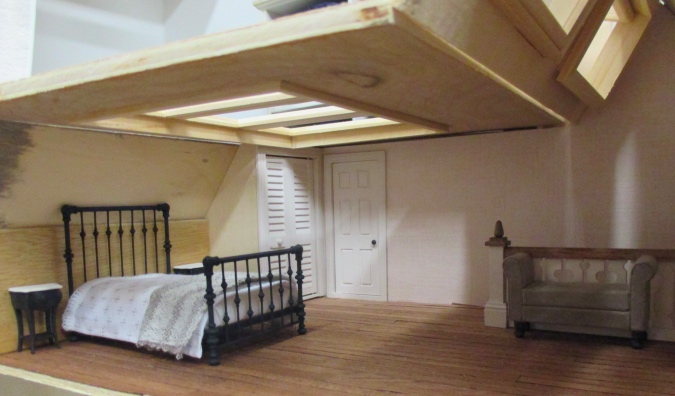