The back-to-back Victorianna has two towers, which I enclosed with French doors to turn into little rooms. The one in the master bedroom will be a small office / writing room. The other tower is attached to the nursery, and I couldn’t think of anything that a baby would need in an enclosed room besides a closet — and as much as I love dollhouse closets, that seemed like a waste of a good space. 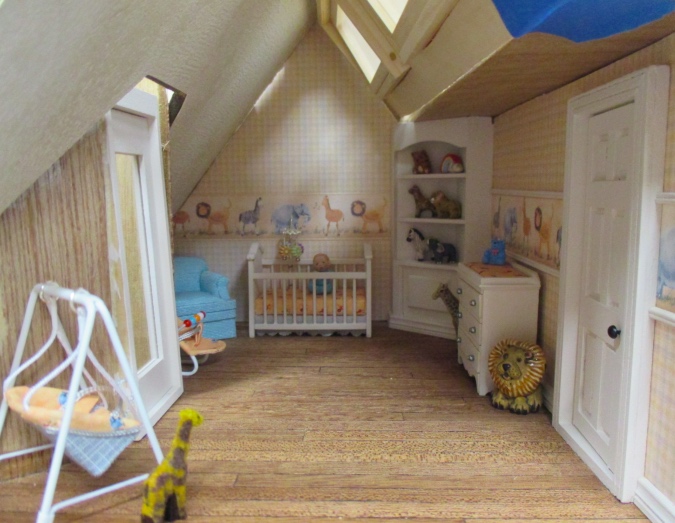 This is the tower with the cupola made out of a 1:48 scale gazebo, and it seemed strange to have those windows up there with no way for the little people to get to them, so I decided to put a spiral staircase in that tower. (The parents will keep it locked so the baby doesn’t wander up there!)

I once made a spiral staircase out of a wooden fan, and it turned out okay, but this time I wanted something sturdier with (in theory) less work on my part. (Famous last words!) I also wanted stained treads and Tuscan Beige risers, like the other staircases in the house, rather than the fan’s wrought iron look. While thinking about what materials could easily be turned into staircase treads, I realized that the roof pieces of the gazebo would be perfect. 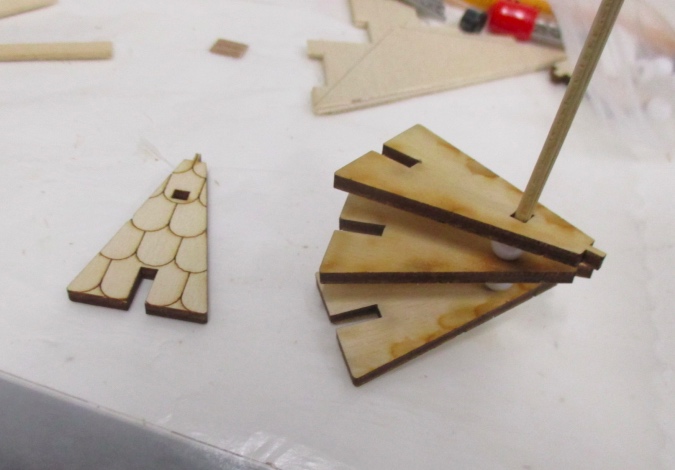 I loved the idea of using leftover gazebo pieces to create a staircase to reach the gazebo, but for the staircase to be to scale I needed more than eight steps, and I only had eight pieces. I tried cutting them in half, but then the holes had to go, and without the holes to stick a dowel through the staircase lost all stability. I tried. And failed. And destroyed the pictures. (It was a sad day.)

So I went online to look for spiral staircase options. There are some kits available in 1:12 scale, but the only 1:24 kit I found, from Dollhouse Laser Designs (the same company that made the gazebo), didn’t appeal to me. Shapeways has some but they’re expensive and I wasn’t sure if the dimensions would work in my tower. I wanted a kit so I could modify it as needed.

(Note: this was back in August. At the beginning of September, Alpha Stamps added a half scale spiral staircase kit to their website. If only I had a time machine made out of a Delorean!)

Then I came across this kit from a company named Lumenaris. 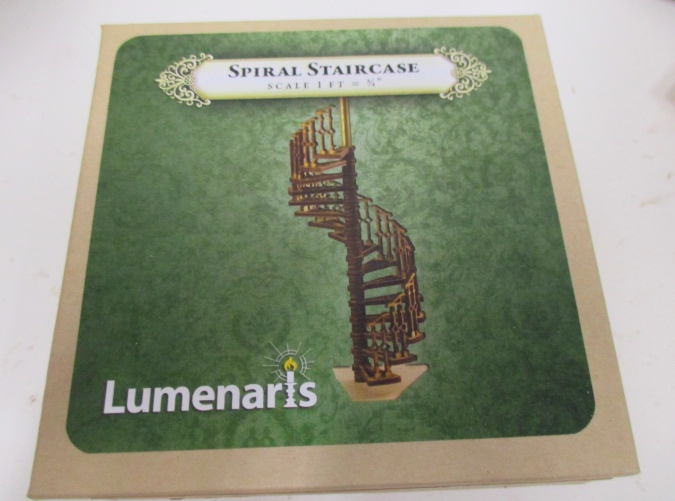 This kit is billed as 3/4″ scale — seems like an odd choice, since that scale is even less popular than half scale — but in general Lumenaris doesn’t sell miniatures, they sell educational toys. (Maybe they’re trying to appeal to the Brinca Dada crowd?) The space between each step is 1/4″ and the steps themselves are 1/8″, so that’s a 3/8″ rise from one step to the next — slightly large for half scale (the equivalent of 9 inches), but considering the staircase will be tucked into the tower I decided to try it.

It shipped 10 days after I placed the order and I got a shipping notification with a tracking number. With shipping, the cost was $25.61. This is what’s inside the box – no instructions or parts list, but how hard could it be? (As noted on their website, the 1/4″ dowel isn’t included.) 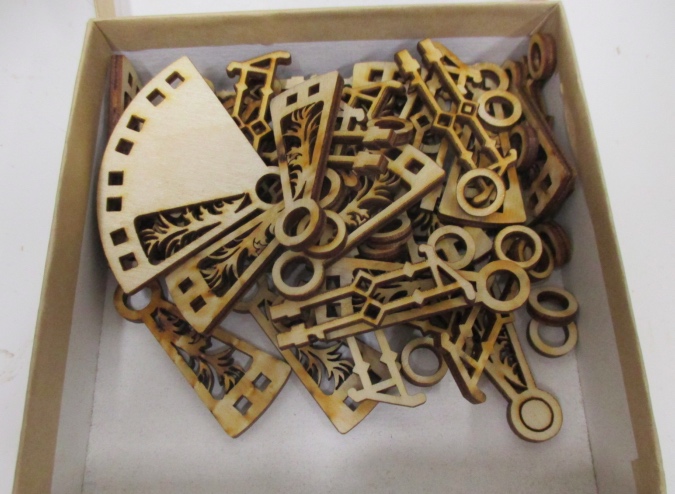 The kit comes with 16 steps plus a landing and there are two rings between each step, so I should have had 34 rings — but my box only contained 25. There should also be three straight railing pieces to go on the landing — my kit had none. I wasn’t sure yet if I would use those railings, but I definitely needed the rings. (Actually, it turns out I didn’t, but I thought I did. Also I wanted to use the extra pieces for something, maybe a set of library steps. Hey, I paid for them!)

I emailed the company on Saturday, September 2 to ask them to send the missing pieces. No response, but hey, it was Labor Day weekend. On Friday the 8th I called the number on their website and left a message explaining the problem and asked for a return call or a response to my email. No call back. On Thursday September 14 I wrote another email (this time with PLEASE RESPOND in the subject) and I did get a response back, from the owner of the company, who basically threw his support team under the bus for not getting back to me. I felt bad about that, but he said he’d get a new kit shipped out to me on Monday (that would be the 18th) so it seemed like the end was in sight.

Except Monday came and went. I actually waited all week, and then emailed again on the 24th asking if the replacement had been sent yet. Guess what? No response. And no response when I followed up again on September 27th, this time copying two other email addresses that my receipt and shipping notification had come from. I guess I could have disputed the credit card charge, but I didn’t want to be a jerk about it. I just wanted what I paid for.

Anyway, after a month (!!) of waiting I decided to improvise.

I wasn’t sure yet if my staircase would need 12 steps or 13 steps to reach the floor of the gazebo. If it was 12 I had enough rings, but if it was 13 I was one ring short. I cut one of the stairs to create the missing ring. (Note that if I were building the kit as designed I wouldn’t have had any extra steps to do this with, so it would have been unusable without the replacement pieces.) 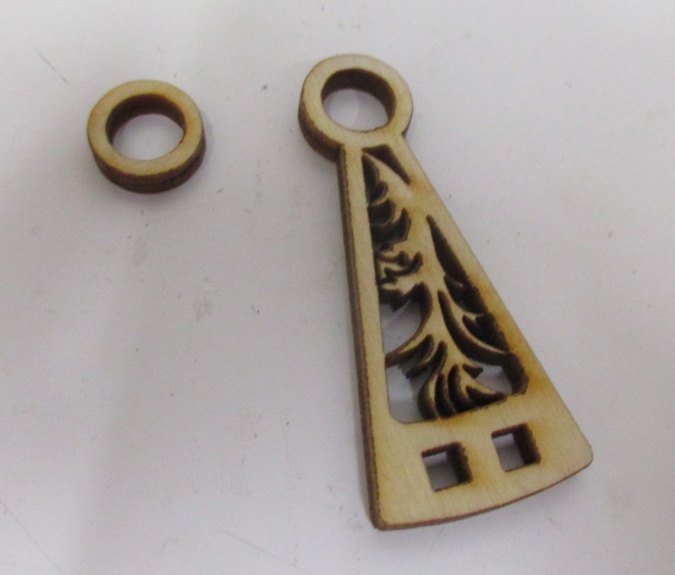 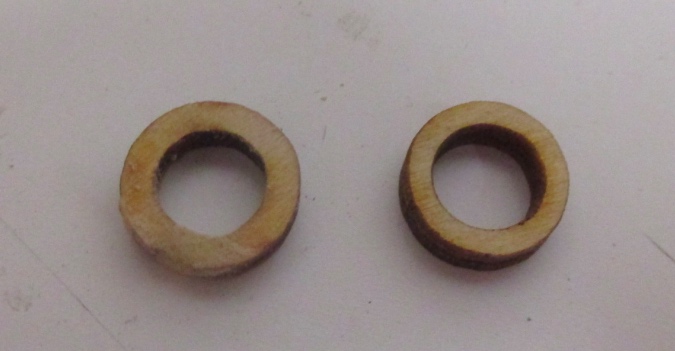 Then I started putting pieces together. And even if I hadn’t had the bad customer support experience, here’s the other reason I can’t recommend this kit: THE RAILING PIECES DON’T FIT. Those tabs at the bottom of the railings should lock into the holes, but they won’t go all the way in. I tried shaving off some wood from the sides of the tabs. Didn’t help. The holes seem too small front to back for the tabs on the railing pieces to fit into them. These pieces are delicate — try to shove them in or shave wood off the fronts and backs of the tabs and I risked breaking them, not to mention wasting a lot of time trying to salvage what should have fit together in the first place. Okay, then, no balusters. Sigh. 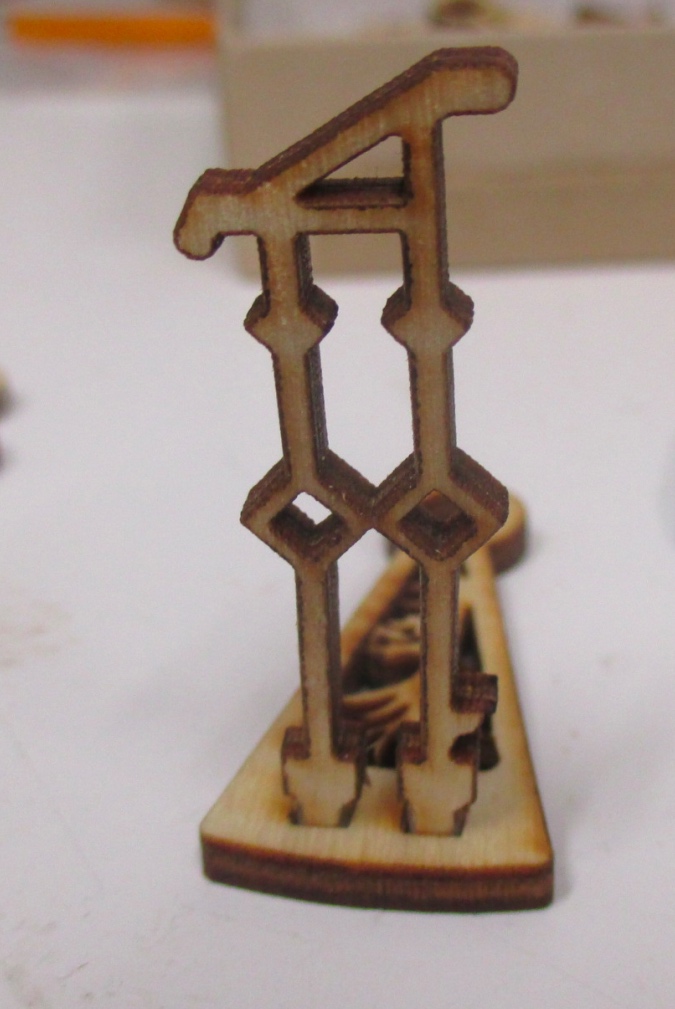 I cut the 1/4″ dowel so it extends a little more than an inch above the gazebo floor. I cut a ball off a 1:12 newel post to put at the top, but the stair pieces wouldn’t fit over it, so I had to remove it and glue it on at the end. 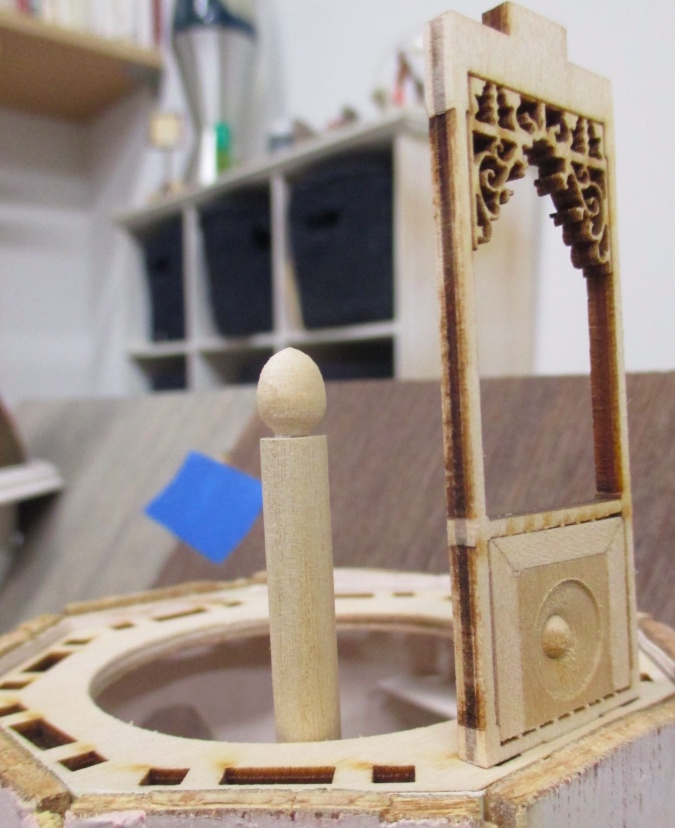 This staircase doesn’t have risers like I wanted, so instead I painted the rings that go between the steps. I only painted the outside edges. 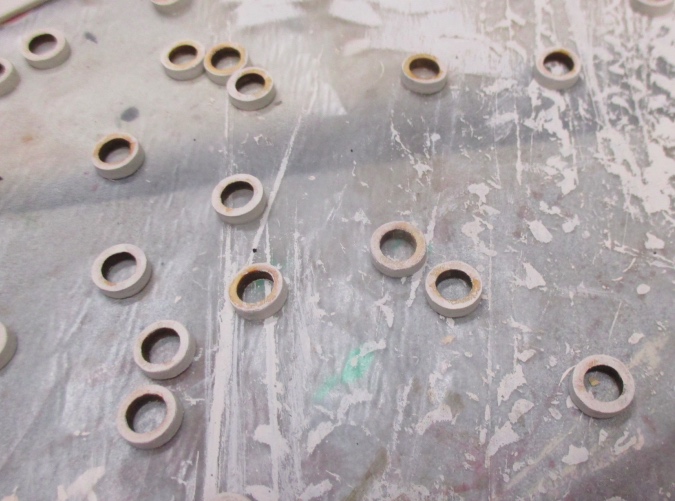 To prevent smearing glue all over the dowel while sliding on the pieces, I added glue directly to the dowel before sliding each piece into place. 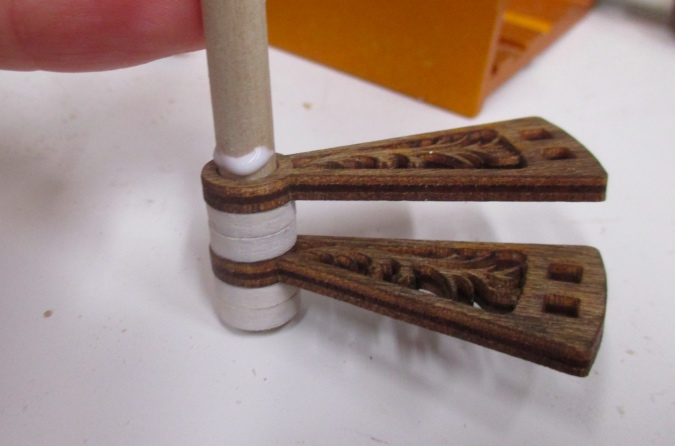 The steps have a pretty laser cut design on them. I was careful to keep each piece “good side” up, so the design goes in the same direction on each step. 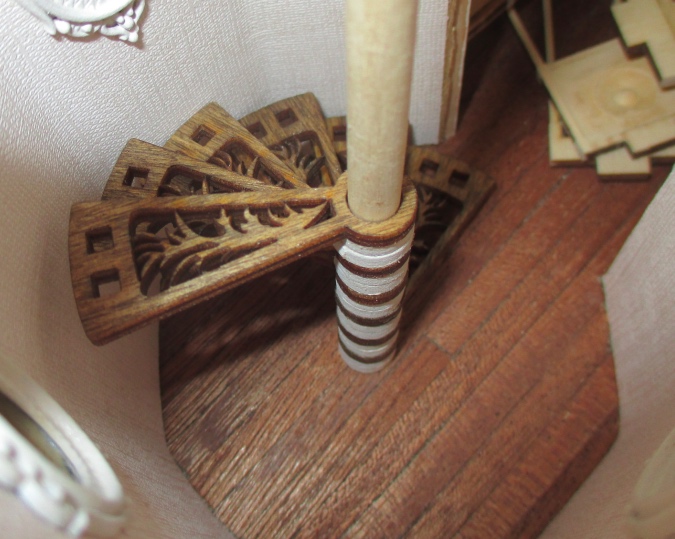 Then I got to the top step, which has a 90-degree landing built in, and realized I had no choice to put it in upside-down so the design goes the other way. (Flipped over, the step part would have been where the landing should be and the landing where the step should be.) That sucks considering this is the step you can see best. If I had put in all the steps upside down (with the worse side of the wood showing), or if the staircase had curved in the other direction, it would have worked out. Funny, since I my stairs curve in the same direction as the picture on the front of the box. Grr. 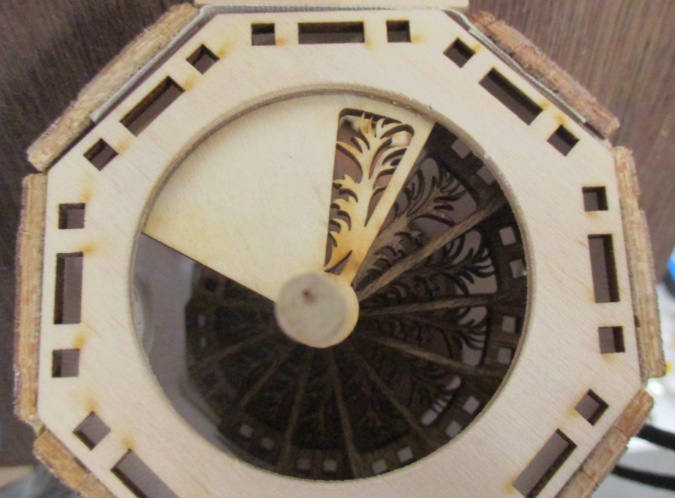 With the gazebo floor resting on top of the landing, I traced the curve of the hole. 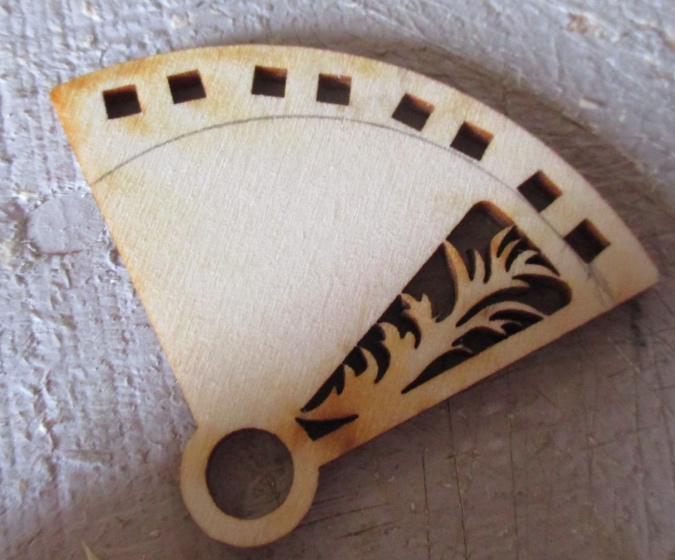 It fits perfectly! At least that’s one thing that went right. 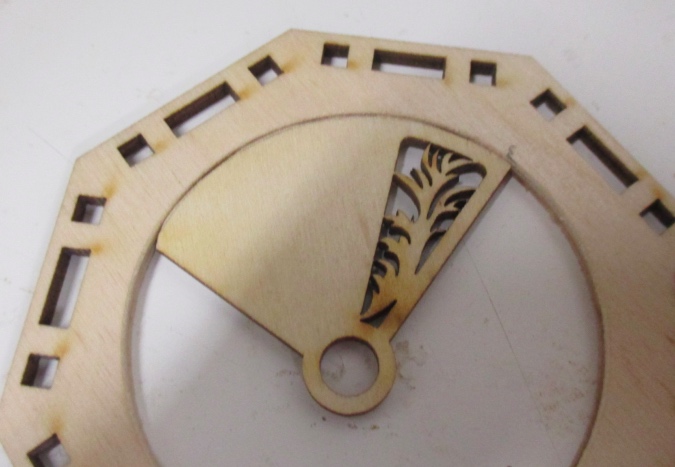 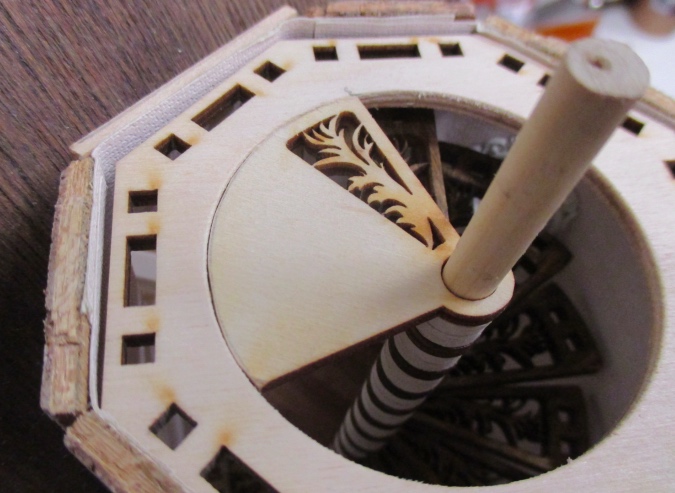 Here’s how it’ll look through the cupola windows. I’ll add a railing to the edge of the landing so the little people can’t fall down through the hole. 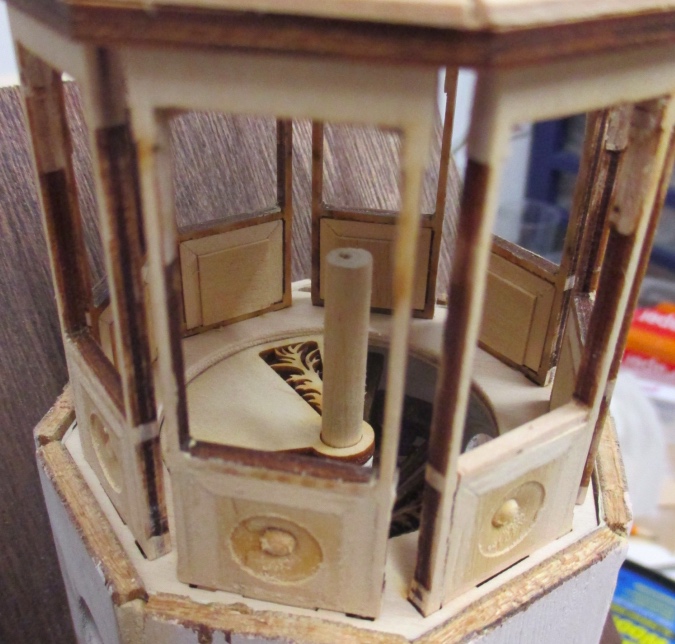 I was planning to add a hand rail to the stairs (using different balustrades since the kit pieces don’t fit) but now that I’ve seen how cramped the staircase is in the tower, I don’t think I’ll bother. Instead I’ll fill in the holes with something decorative — these silver brads aren’t the right color, but something similar. I might also add risers like I’d originally planned (mocked up here with a piece of 1/4″ basswood). 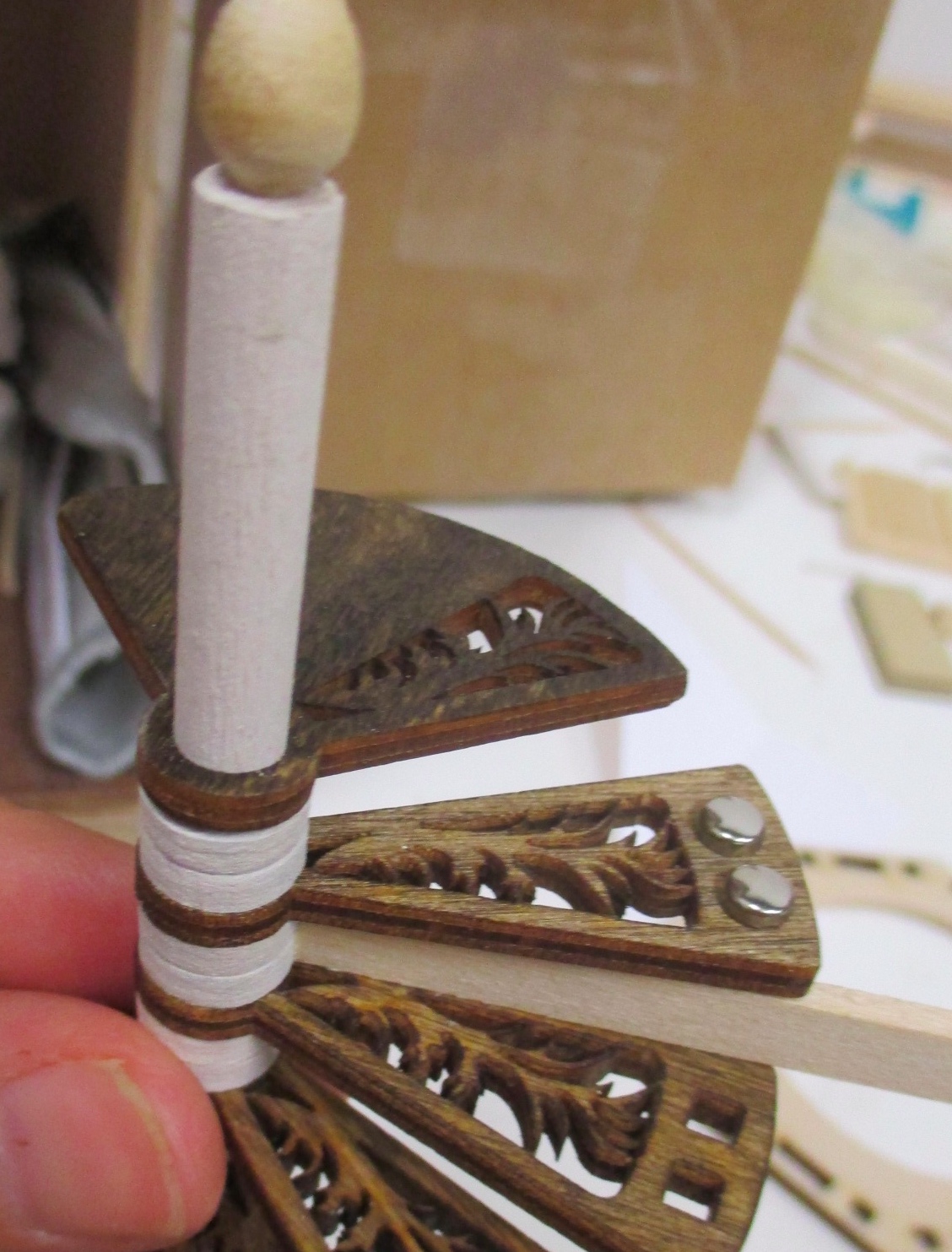 Here’s a view of the staircase through the skylight in the baby’s room. I have a tendency to put impossible-to-see things in dollhouses so I’m happy this much of it is visible! The door is supposed to hinge on the other side, but I’m going to switch it to keep this view. 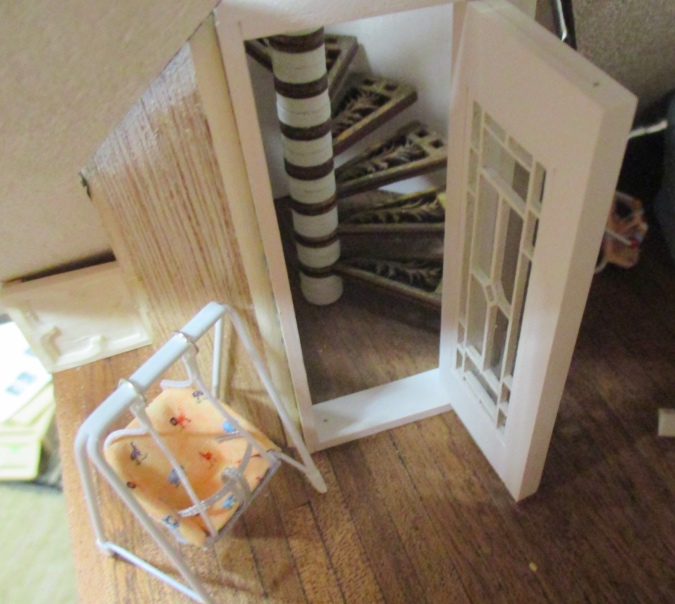