In my last post I was worrying that I might inadvertently trap the bar in the corner of the roombox once the picture rail and wainscot are in. Samantha of Blueprint Minis suggested adding wood to the wall, the same color as the bar, so the bar sits slightly out from the wall and won’t be trapped by the trim. Great idea!

The side of the bar doesn’t go down in a straight line, so I cut two pieces to be positioned like this. 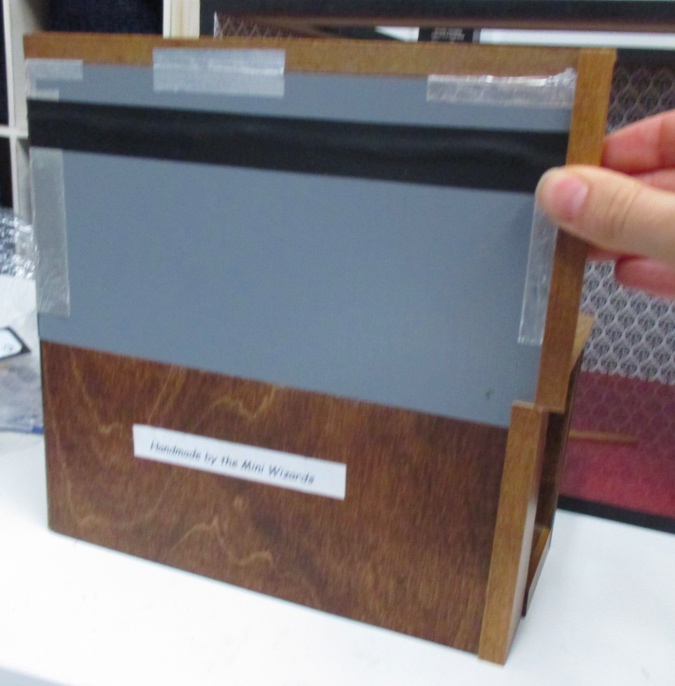 I glued the pieces to the back wall. The picture rail will be flush with this frame rather than being flush with the edge of the bar, which would have made the bar hard to get in and out of the corner. 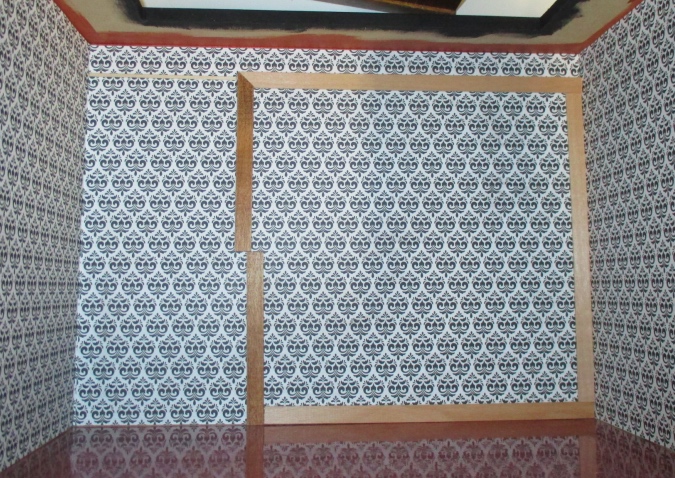 This edge is almost impossible to see due to the shape of the roombox, but at least the wood is there now in case you can see it from some odd angle. Even getting the camera right up next to it, I was barely able to get a photo that shows the frame. 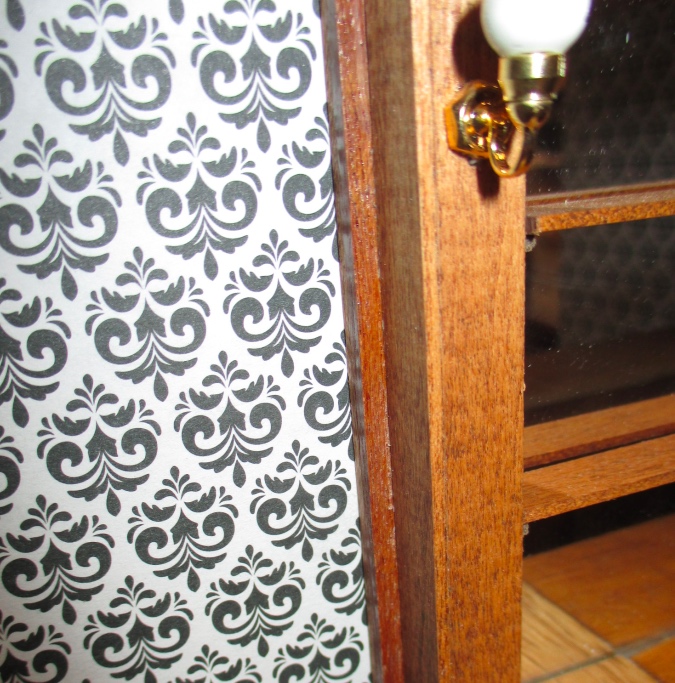 With that done, I put the door in place and cut a piece of wainscot to fit between the door and the bar. This will not be glued in permanently. When I need to remove the bar, I’ll remove the piece of wainscot and then slide the bar toward the bathroom door, which provides just enough space to get my hands in to unplug it. 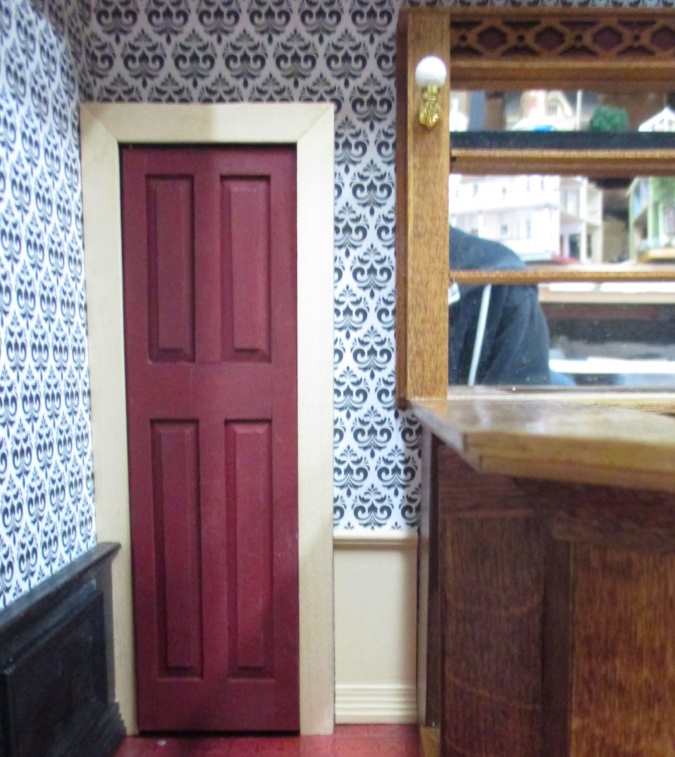 Next I painted the door trim, picture rail, and last piece of wainscot. While that was in progress I glued in the ceiling, which is a plastic patterned sheet that I painted antique copper. I used Tacky Glue to glue it in. 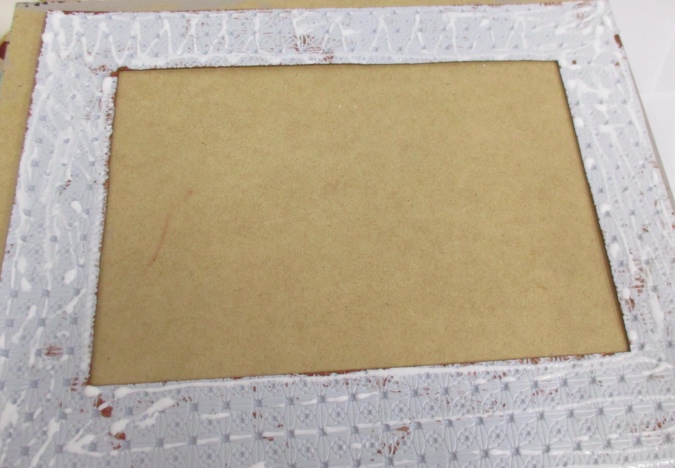 I put a piece of wax paper over the ceiling to protect the paint, then used my old friend the medical dictionary to weight it down. 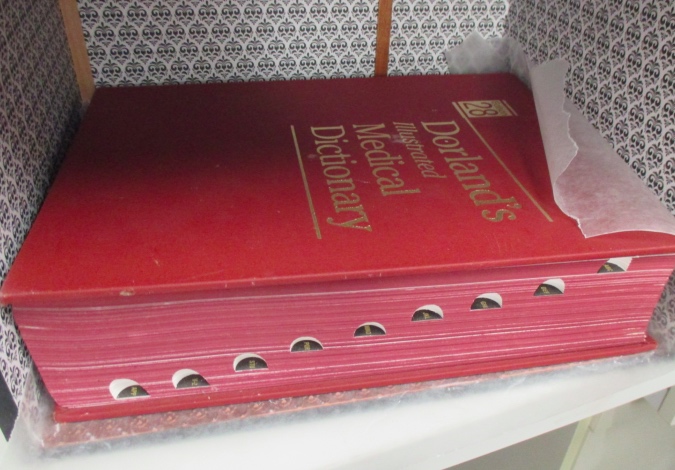 When that was dry I added the picture rail. This is going in to hide the seam on the side walls where I glued in paper strips to cover up an electricity mishap. On the side walls, the bottom of the paper strip provided an edge for the trim to butt up against, so it was easy to glue in straight. On the back wall, the trim is wedged in between the roombox corner and the bar frame, and the wallpaper pattern helped me keep it straight.

Now on to today’s main attraction — the fake, gender neutral bathroom. It’s not necessary for the bathroom door to open, but because it does, I figured I should put something behind it. I looked online for pictures of (not gross) public restrooms with a size and shape that would be understandable through the door’s narrow 2″ x 7″ opening.

After printing out several possibilities in black and white to see how they fit, I chose the one below (source). Before printing it out in color I increased the dpi (dots per inch) as much as I could without making the image too short to fit in the doorway. (Higher dpi = better print quality.) It’s only about 85 dpi, which is pretty low for printed images, but you’re only going to get a glimpse of it. 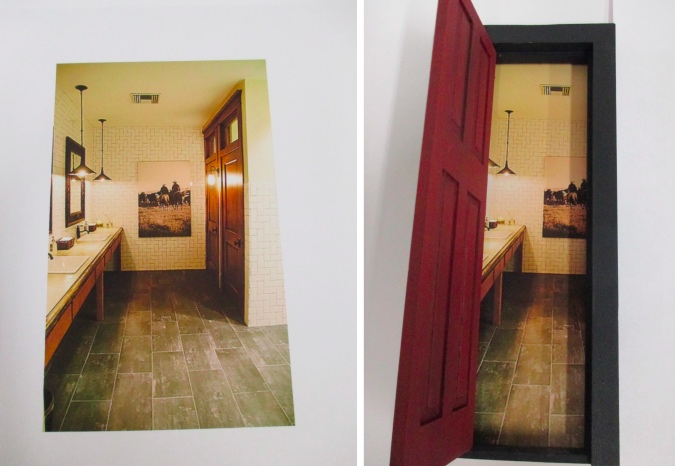 Remembering at the last minute that I have had issues with wallpaper mucilage damaging printies, I glued the image into the corner with Mod Podge. 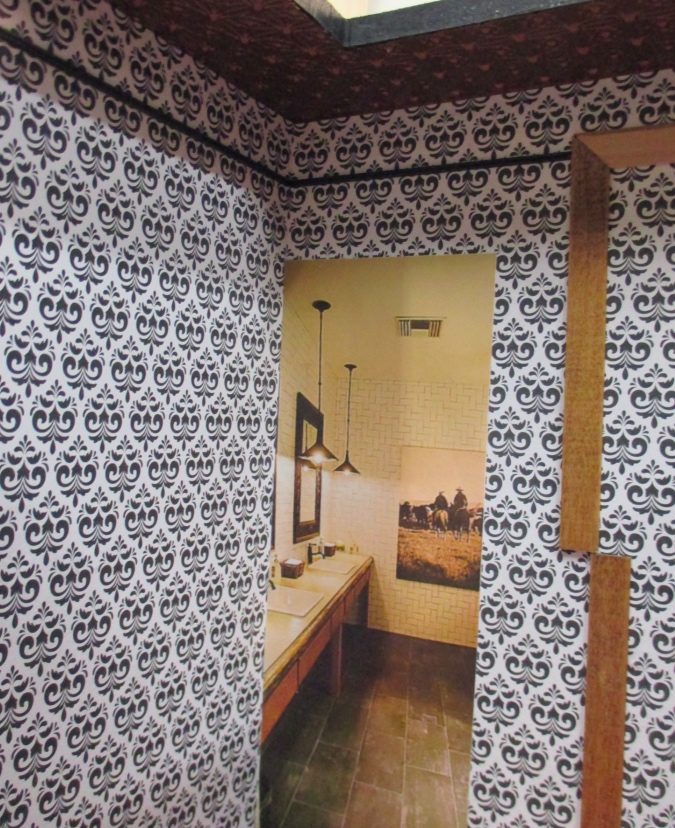 Here’s how it looks through the door. The perspective isn’t perfect, but the door’s going to be closed most of the time. I just thought this would be a fun thing to hide in there. 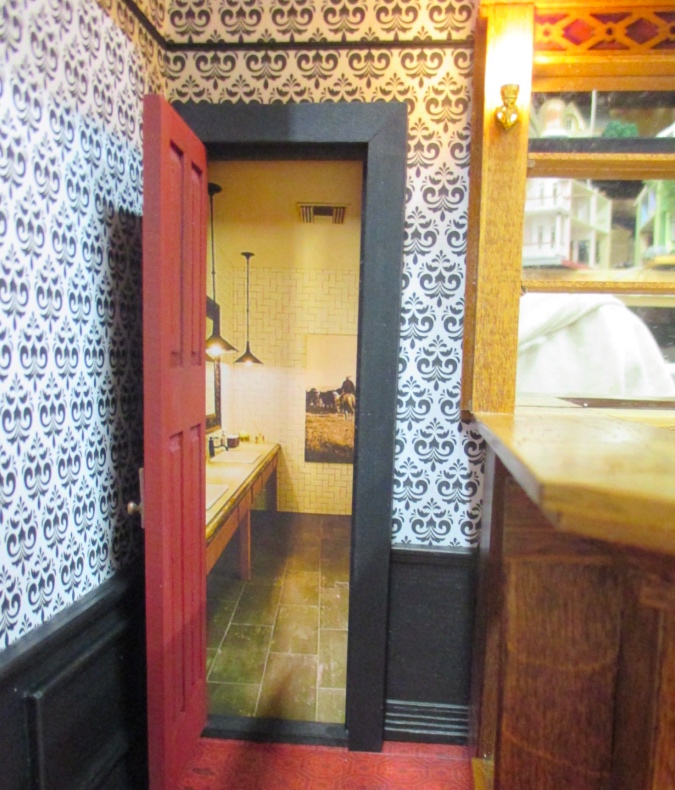 I made a Restroom sign out of another image I found online, and a piece of wood with the edges painted black.

I glued on the graphic and then coated it with matte varnish. The brush marks sort of look like wood grain. (That wasn’t intentional!) 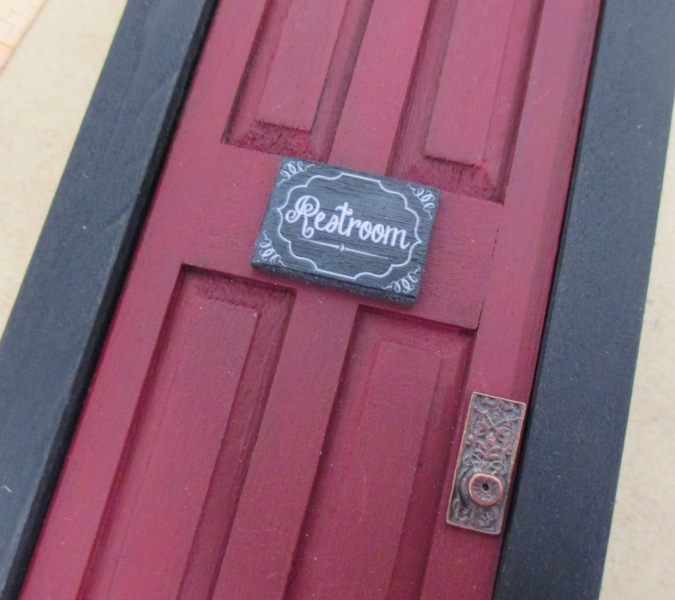 I haven’t glued in the waintscot yet, but here’s how the room is looking. 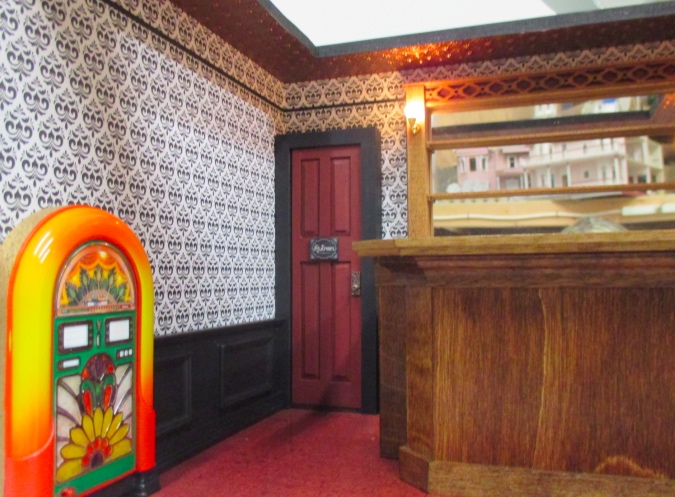 And, hey, the lights still work! 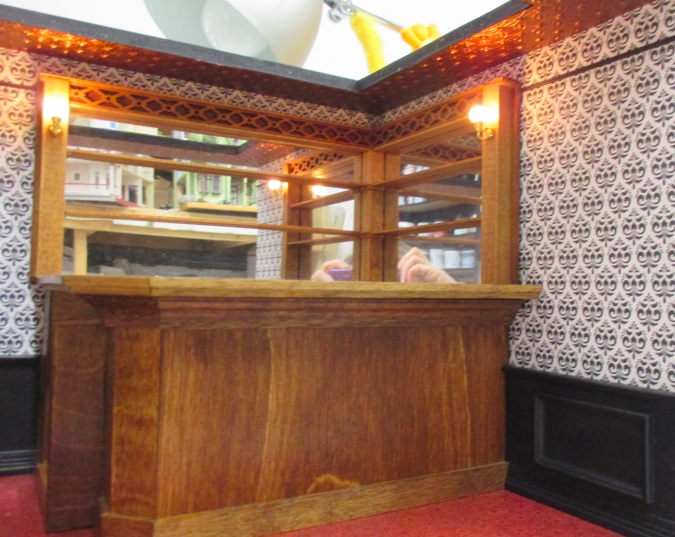 Here’s a nice view of the copper ceiling lit up by the bar lights. I plan to add trim around the hole — it’s wavy in a few places, so trim will give it a sharp edge. 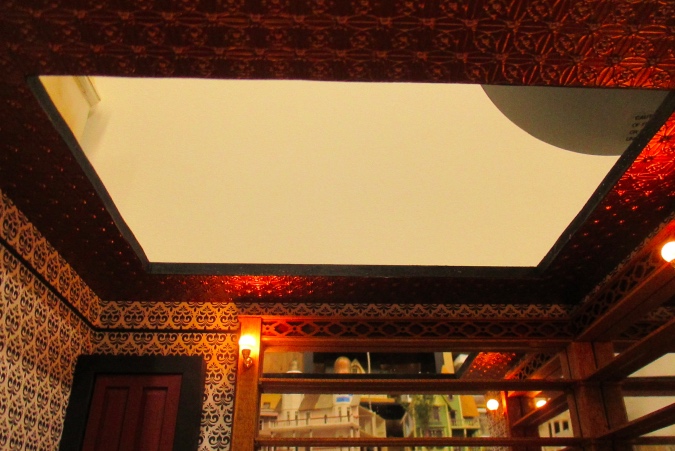