I’ve put off posting about the bar roombox while I finish up some small details that didn’t seem exciting enough to post about on their own. Back in March I added brick to the outside of the roombox, using Magic Brick like I did on the front. I thought it would be easier to do all three walls at once than to try to match up the pattern at the corners, so I started by wrapping the sticky templates all the way around the roombox. I protected the junction box with masking tape. 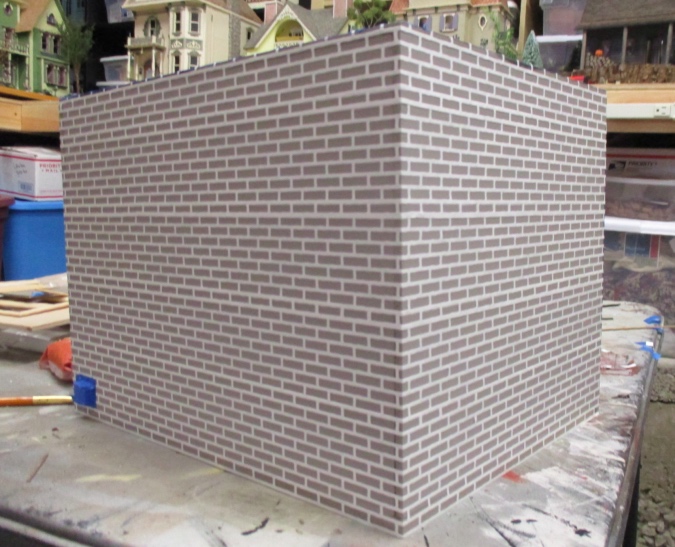 The bricks on the front part of the roombox came out disappointingly flat, so I made a point of spreading on the brick material very thick this time. 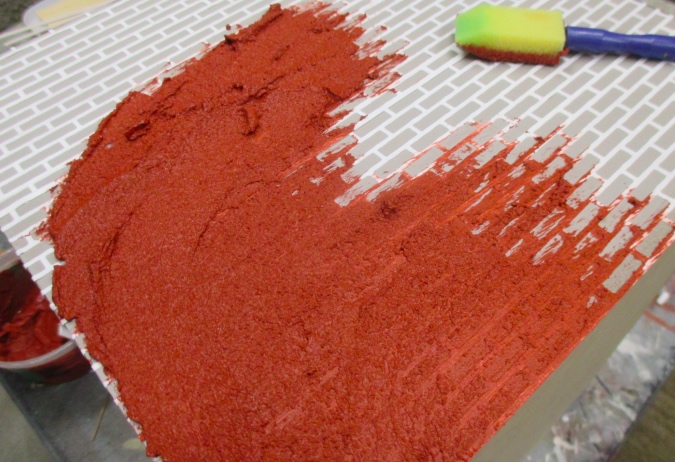 You’re supposed to pull off the template no more than five minutes after spreading it on. With this much area to cover, that wasn’t going to happen! 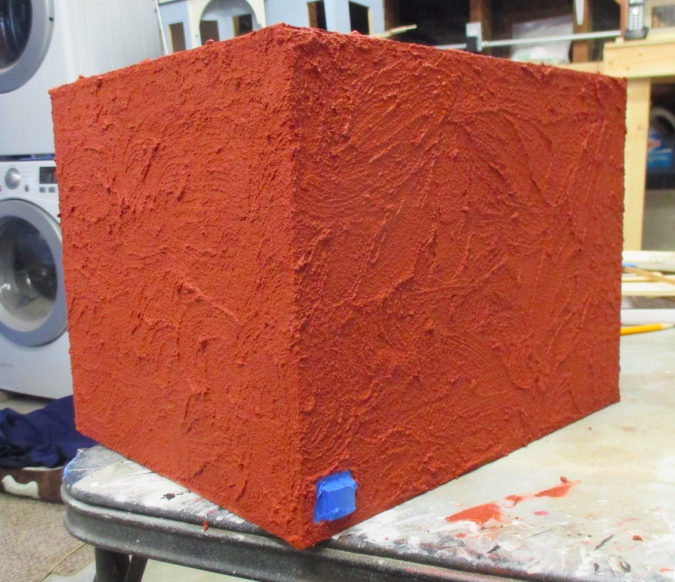 It worked out okay, though. I took this picture while the bricks were still wet. Some are a little messy and on the right you can see a spot where I accidentally stuck my finger into the bricks and smeared red color into the grout line, but overall I’m much happier with these bricks than the first attempt. 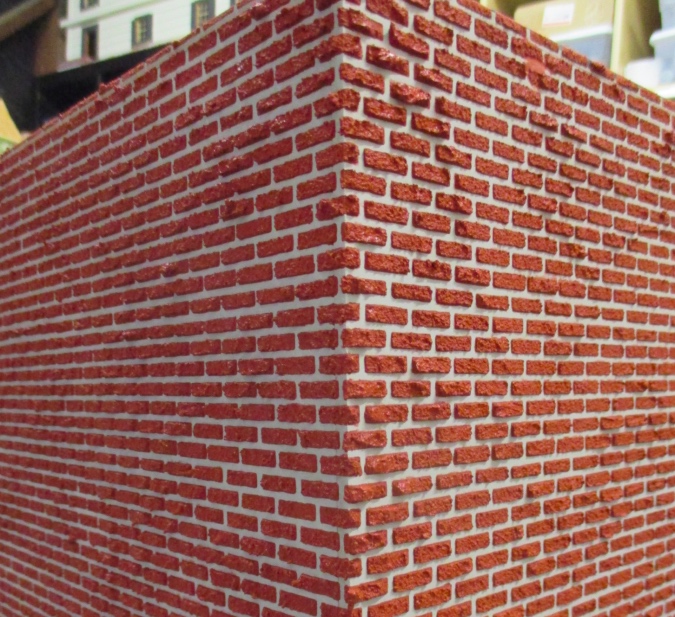 Here’s a comparison – the new bricks on the left and the first ones on the right. See how some of the original bricks don’t even have texture, just color? I think I just didn’t use enough of the brick material, plus it was too watery, so the texture that did stick ended up flaking off after the bricks dried. That’s happened a little bit on the new batch, but overall they’re much more brick-like. Even so, I don’t think I’ll use this stuff again. It’s a cool concept but I think egg carton bricks look more realistic. 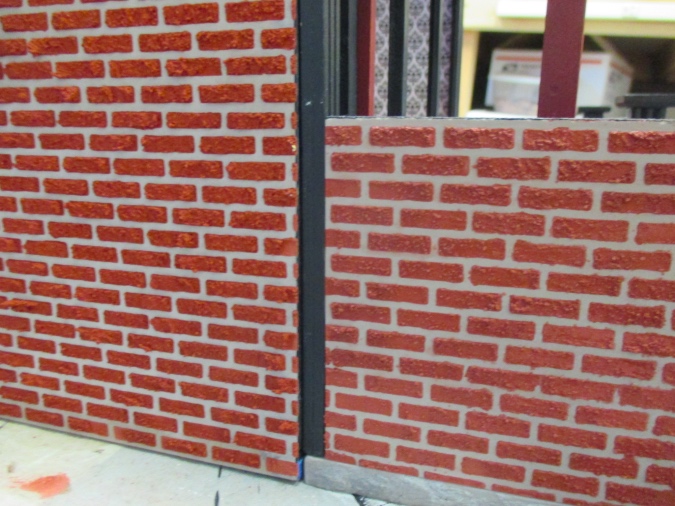 Next I added a logo to the door. I came up with the name Blackbird Bar early in the project because I knew black was going to be a prominent color in the decor, and it just sounded cool. I have some glossy sticker paper left over from my mini Absolut bottles and life sized spice jars, so I decided to print something to go on the front window of the bar.

Initially I was thinking of a simple blackbird in silhouette, but when I started Googling I discovered several real life bars named Blackbird. This is the logo for a bar in Milwaukee. 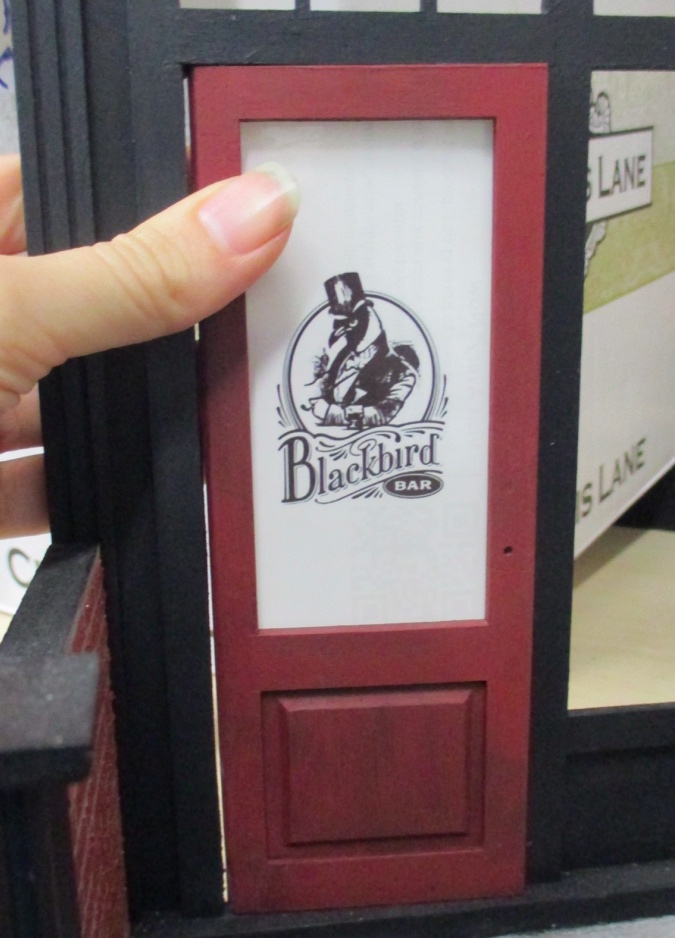 I printed it out with enough space around it to put sticker paper over the entire window. 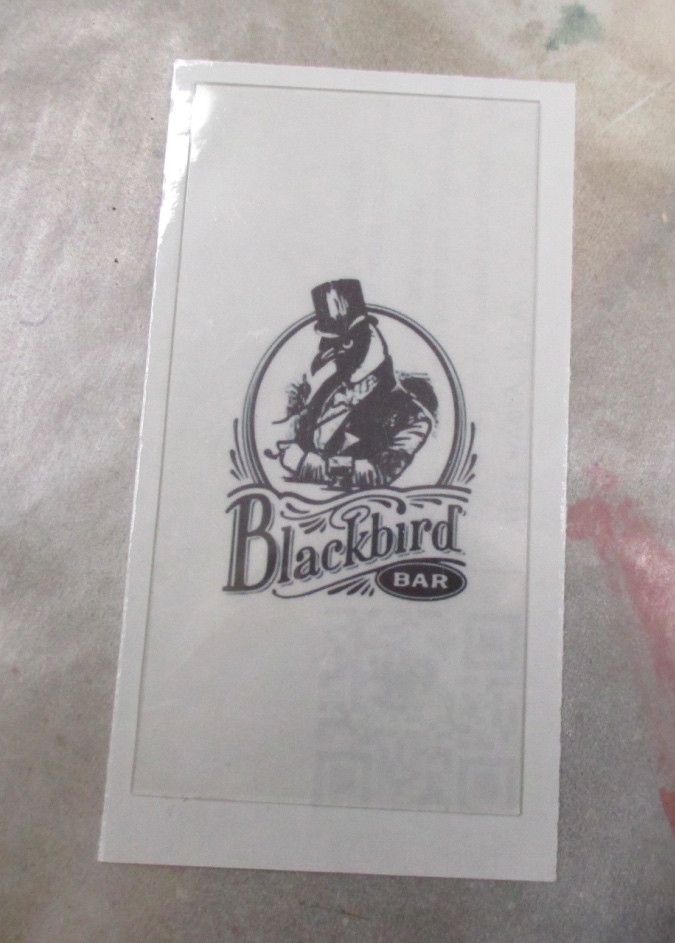 Unfortunately the sticky paper has these creases on the back of it, where the backing separates so you can pull it off. On the liquor bottle labels and spice jar labels I printed out before, this didn’t matter too much, because those labels were so small. But on the window it looks like a huge scratch. 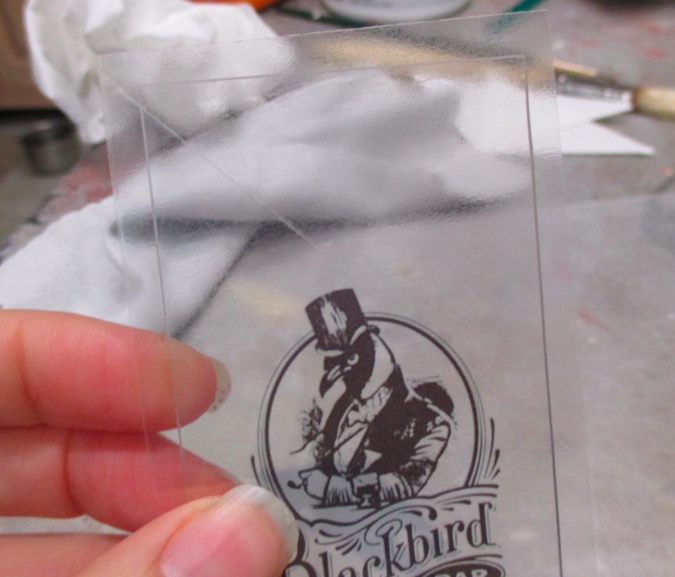 I tried several times, but even when I managed to print out the logo on a portion of the sticker paper that didn’t have a crease running through it, the sticker wrinkled as I stuck it down, resulting in bubbles. I wasted almost a whole (expensive) sheet of sticker paper on this.

Finally I gave in and cut around around the logo. This was the only way I could do it without getting bubbles under the sticker. 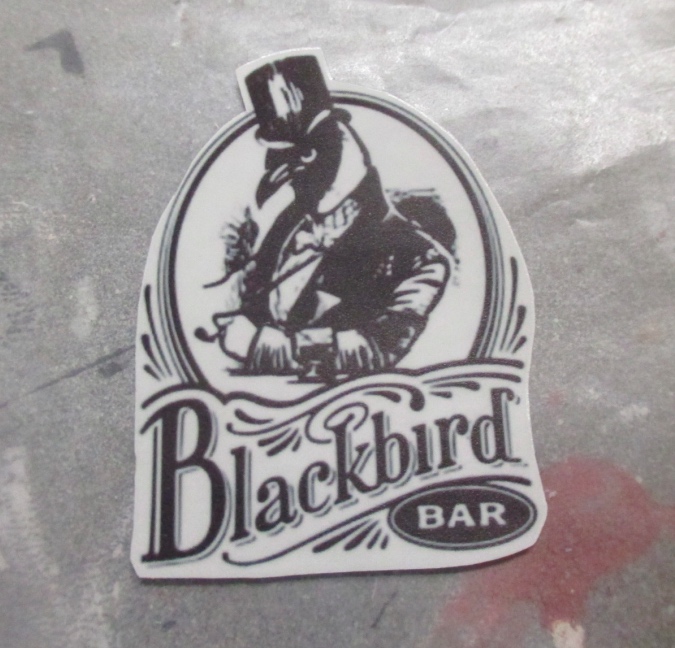 That looks okay, but I’m not 100% happy with it. When the whole window was covered by the sticker, it looked like frosted glass. Now it looks like clear glass with a sticker on it. 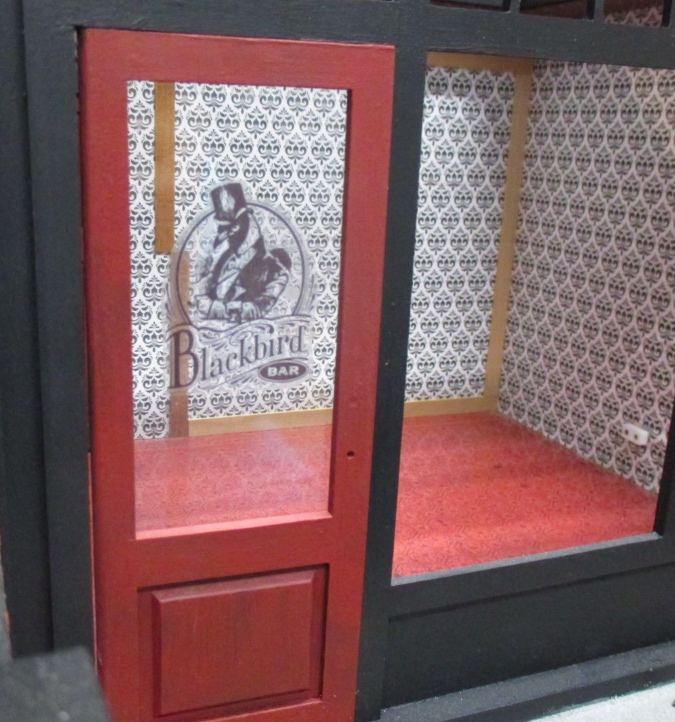 Here’s how it looks with furniture inside the bar. Now the edges of the sticker are even more obvious. 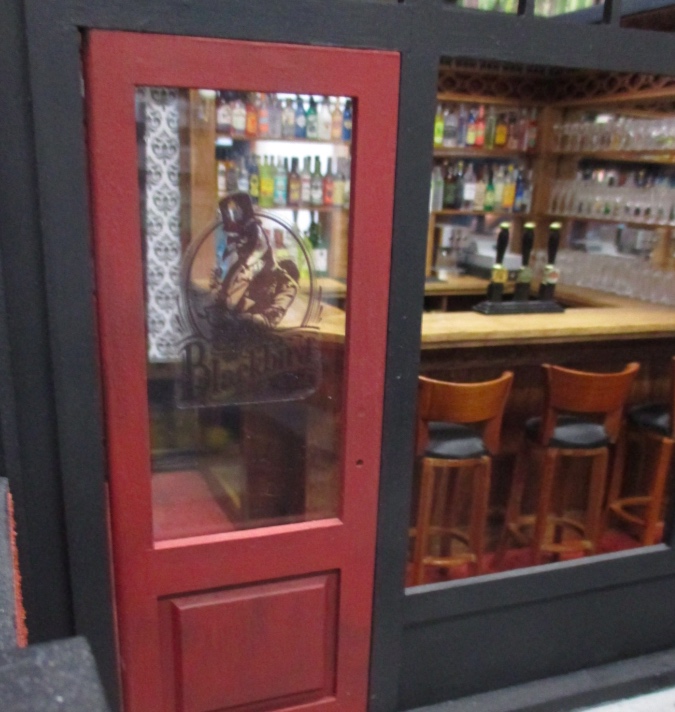 The logo is kind of hard to see on the window, so I should just call this good enough, but the more I look at it, the more tempted I am to try again with a sticker that covers the whole window. I’m thinking about printing out a mirror image of the graphic and sticking it to the inside of the window — I think I can pin down the corners of the sticker so it’s taut, and then place the window on top of it, so there won’t be bubbles. I haven’t decided if it’s worth going to the trouble. Stay tuned, I guess. (I haven’t glued in the window yet.)

Speaking of perfectionism, here’s another little thing that was bugging me. This piece of wainscot is slightly too short, so the wallpaper shows through next to the bar. When the bar is in place it’s not quite as bad as it is in this photo, and once the dolls are in they’ll block it, but I still wanted to fix it. 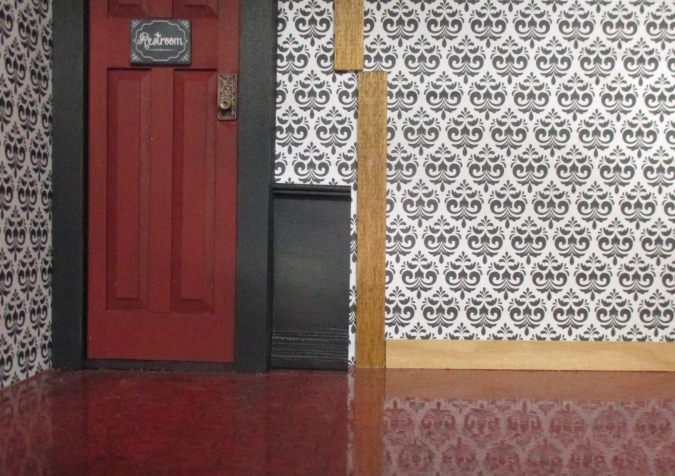 Redoing the wainscot would have been the “right” fix, but why go to all that trouble? I filled in the area in question with black Sharpie. 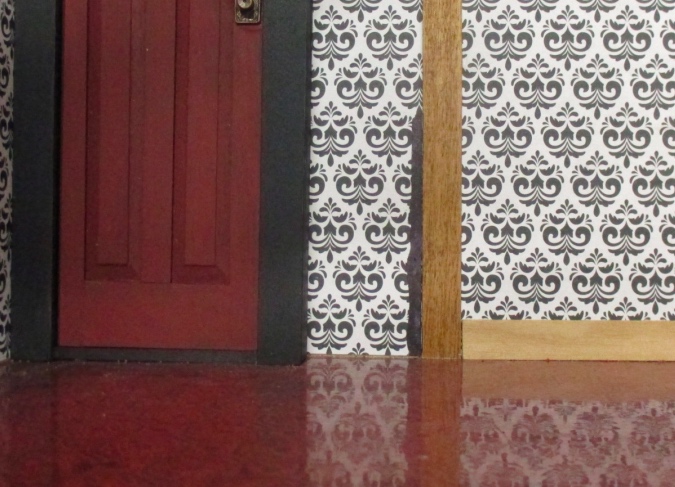 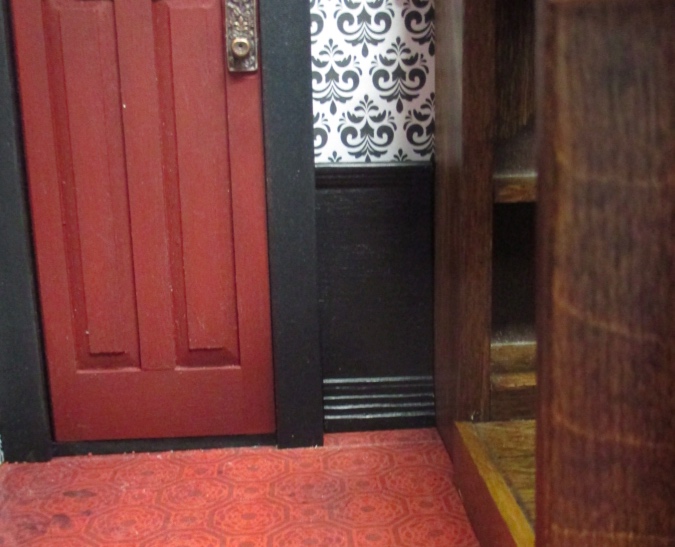 The last thing I needed to do was to finish the hole in the ceiling. The MDF edges of the hole were wavy, so I cut strip wood to cover them up, along with 1:24 window casing to give the hole a finished look on the ceiling. 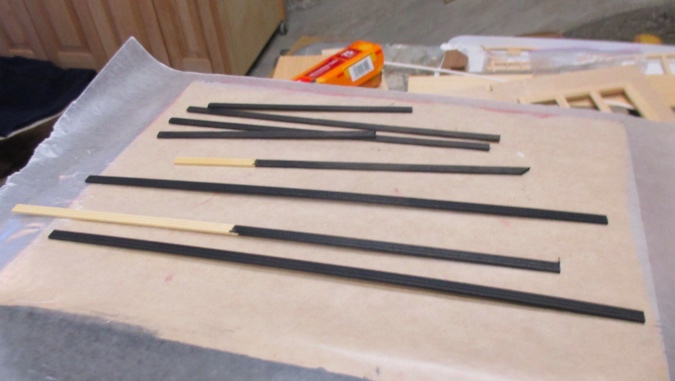 I glued the strip wood over the edges of the MDF first. Then, using the outside of the hole for reference, I cut the casing pieces. This was a lot easier than reaching up into the roombox to measure them against the ceiling. 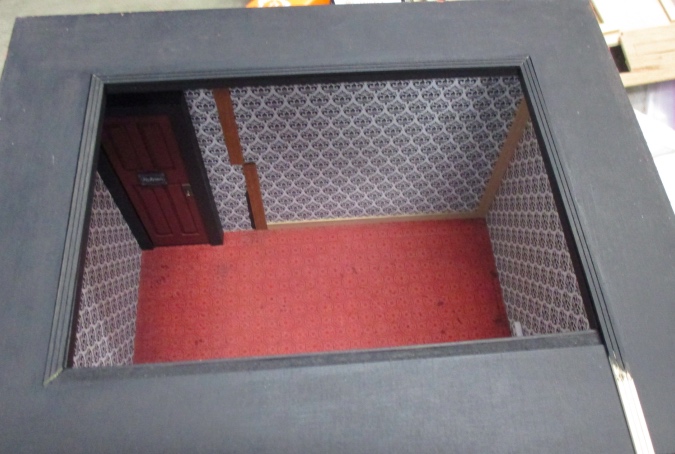 Then I turned the roombox upside down and glued in the casing pieces. They really didn’t want to grab on to the bumpy styrene with Tacky Glue but I was hesitant to use Quick Grip after my last experience with styrene roofing, when Quick Grip melted the plastic. I ended up using Crafter’s Pick Ultimate glue, which is a white super glue, and then putting a heavy book on top of the casing while it dried. 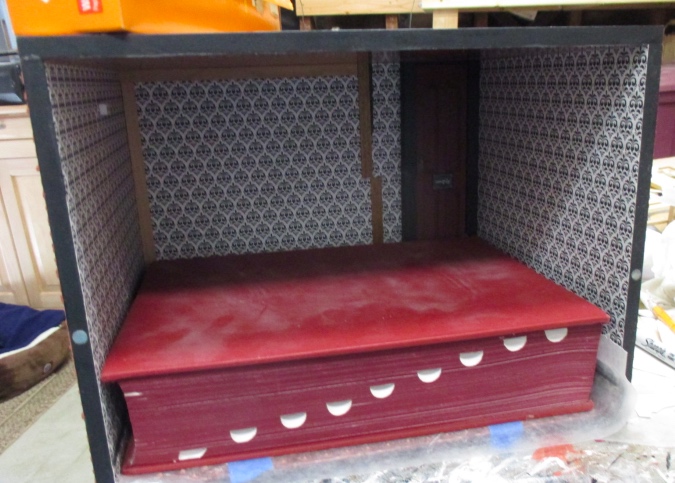 That didn’t turn out as planned. The casing was supposed to be flush with the inside edges of the hole. The trim on the front edge is good, but the other three extend past the edges of the hole so you can see the back of the casing. Not sure if they slid when I put the book on or if they weren’t positioned right in the first place (I couldn’t see this angle with the roombox turned upside down). I really didn’t want to damage my painted styrene ceiling by pulling them off, so I decided to live with it. 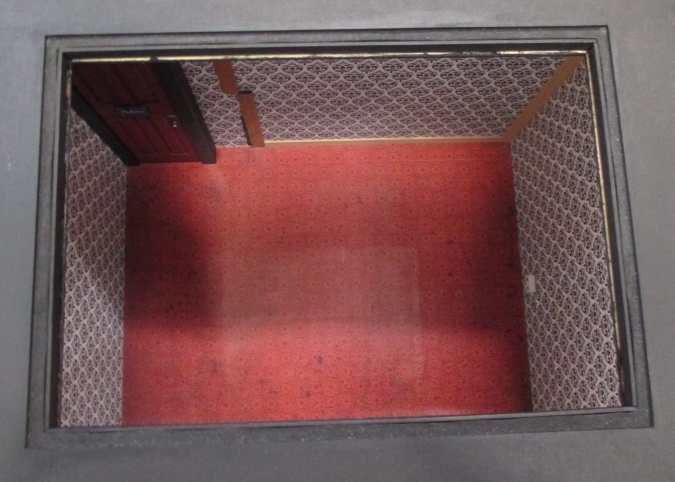 I added a coat of wood filler to cover up the cracks where the casing meets the strip wood around the inside edge of the hole, as well as the pieces of casing that didn’t line up like they were supposed to. 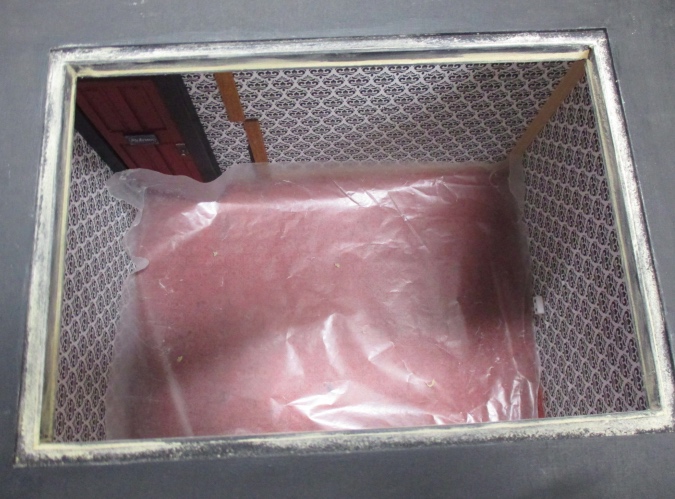 Here it is after paint. Not as clean as I’d envisioned, but it’ll do, pig. A plastic window will sit in this opening, but I’m not going to glue it in so I can keep using the hole to access the inside of the roombox. 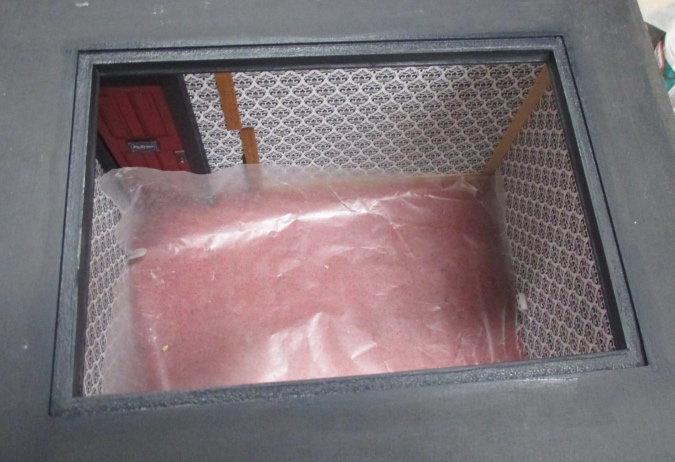 Of course, as I was reaching into the hole with the wood filler, I got some on the casing. 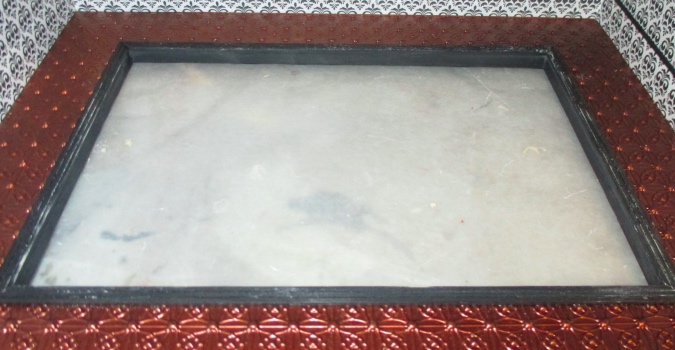 I carefully painted over the casing again, and also did a few copper touch-ups on the ceiling. 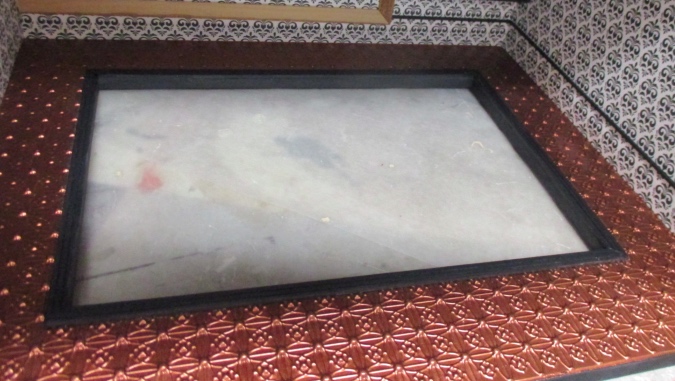 And with that, the roombox is complete! (Well, except for the windows, which I haven’t glued in yet.) I have a bunch of accessories to spread around, and I’ll do a separate post about those, but for now here are the bar patrons getting ready for a night of heavy drinking. 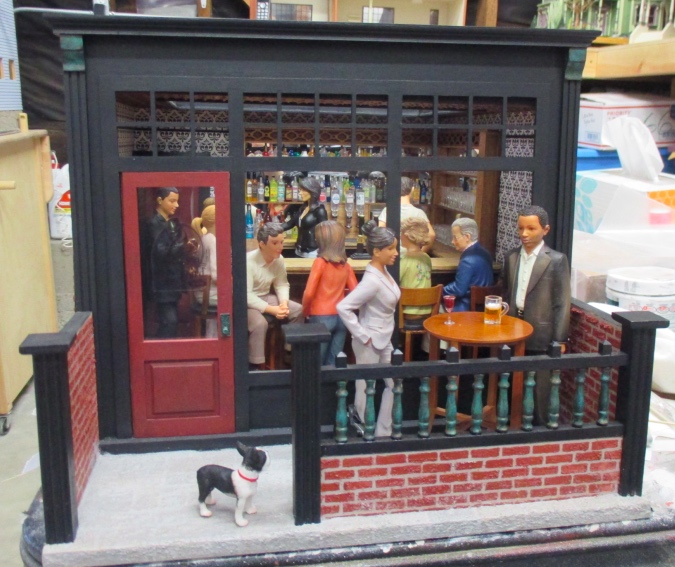 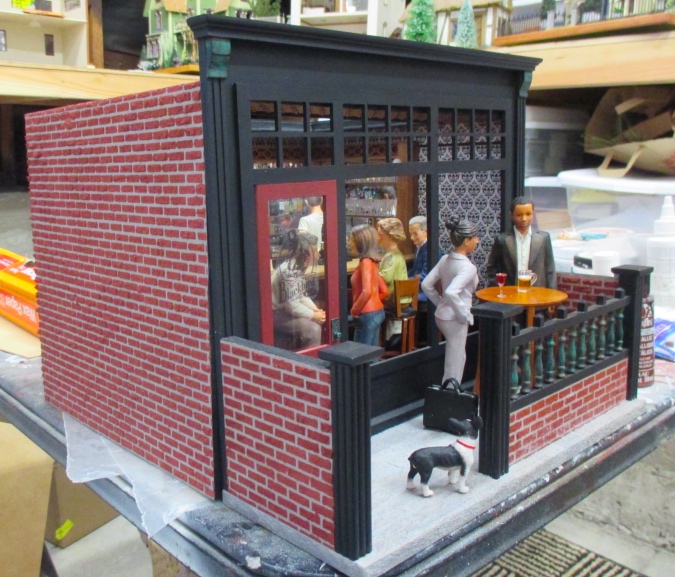 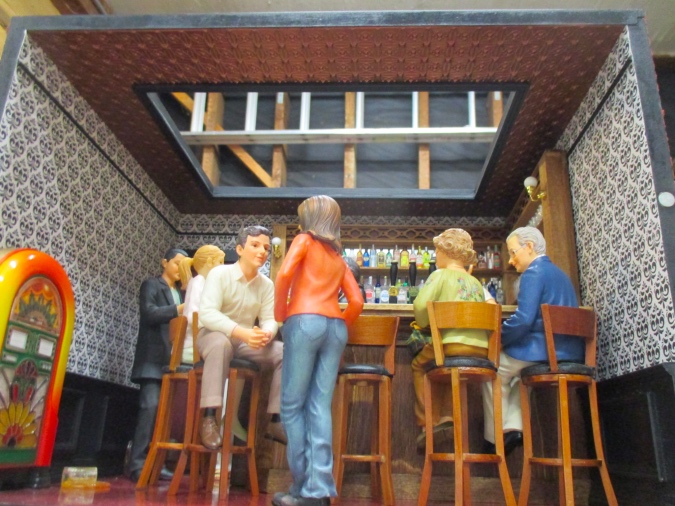 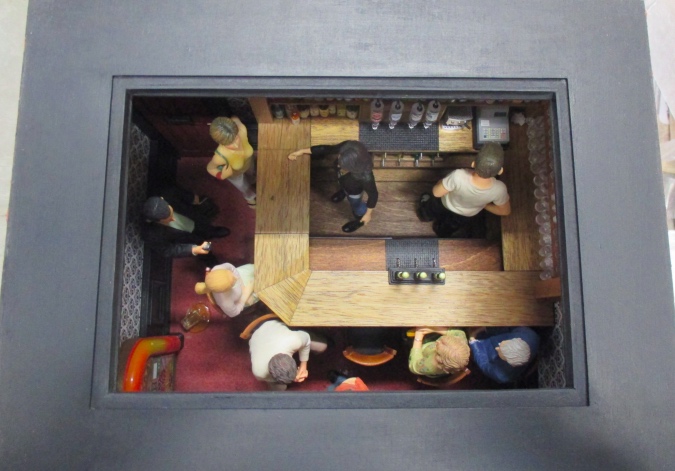 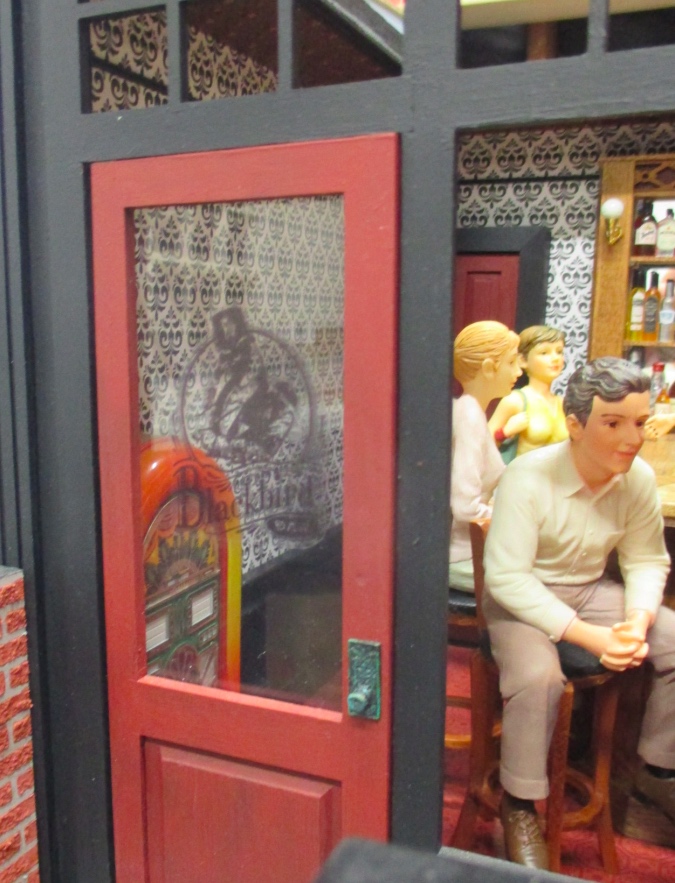 And a sneak peek of the libations… 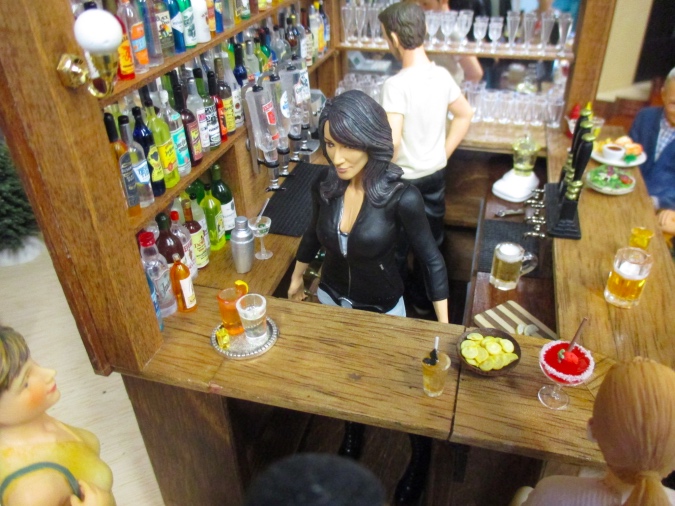