After six months of construction, the Blackbird Bar is open for business! 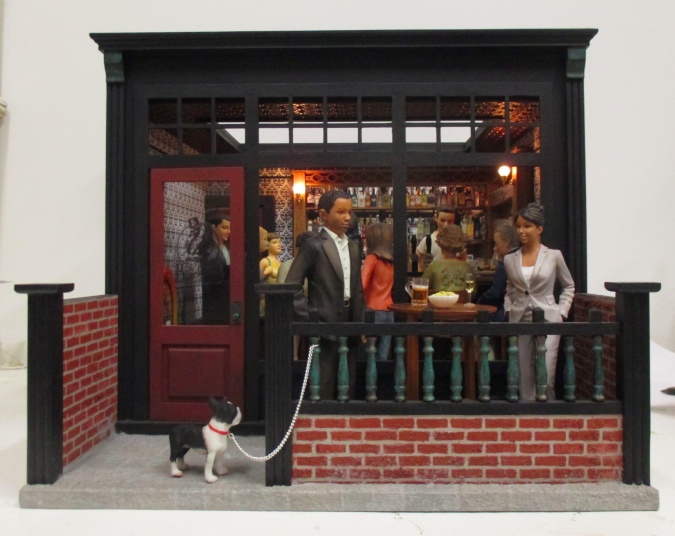 With the bricks and ceiling finished, I finally spread out all the accessories I’ve been hoarding since I started this project back in November — like this little guy. I’ve named him Max. 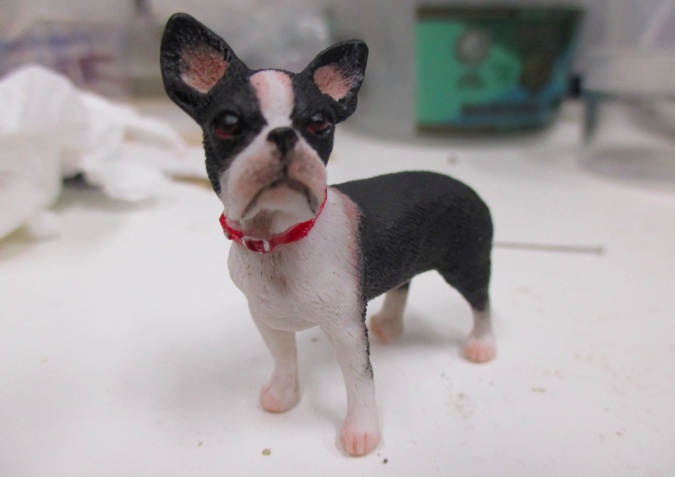 I specifically bought this dog because he has a collar (most resin dogs don’t), but he also happens to fit with the bar’s black and white and red color scheme. I wanted him to have a collar so he can be leashed to the fence outside the bar.

I attached a necklace chain to one of the posts with a jump ring. The bottom of the post was too thick for the jump ring to fit around, so I had to put it up at the top. 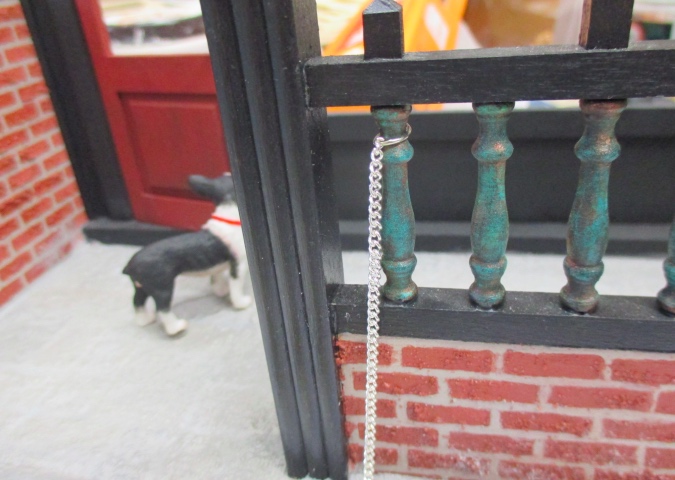 I used my micro drill to drill a hole in Max’s collar, where the leash would attach. 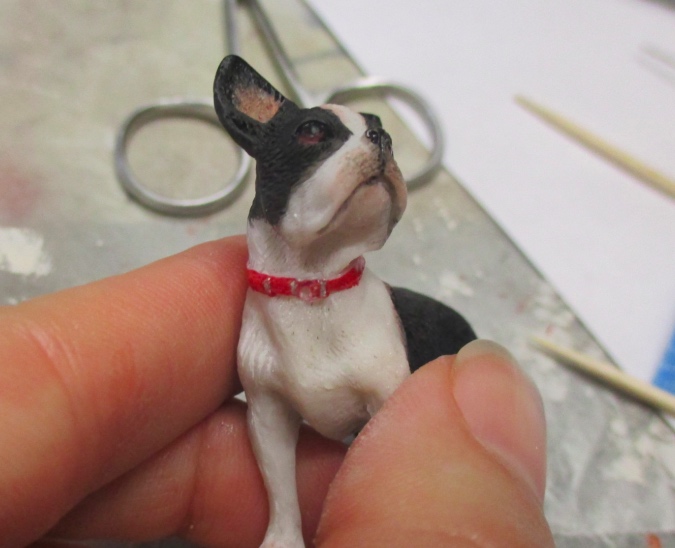 Then I glued in a cut-down eye pin attached to the other end of the chain. The eye pin is kind of large (I wanted it to look like the ring on the collar) but it serves its purpose. 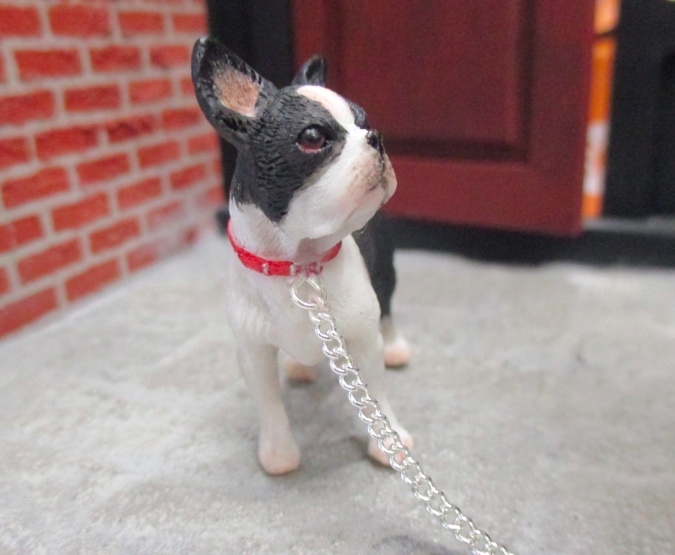 This is the equivalent of a six-foot leash, but it looks too long. I shortened it after I took this picture. 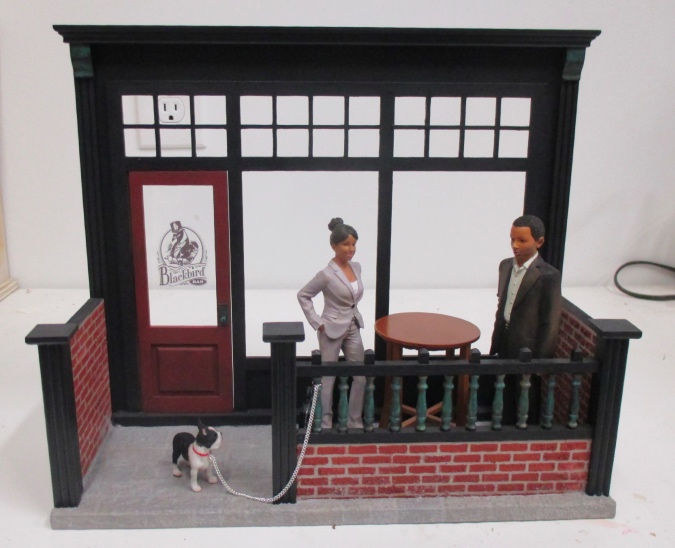 In looking for dolls for the bar, there were a lot more standing dolls available than seated dolls. I bought almost all of the seated dolls I could find and still didn’t have enough for all the chairs, so I decided not to use chairs at the outside table. 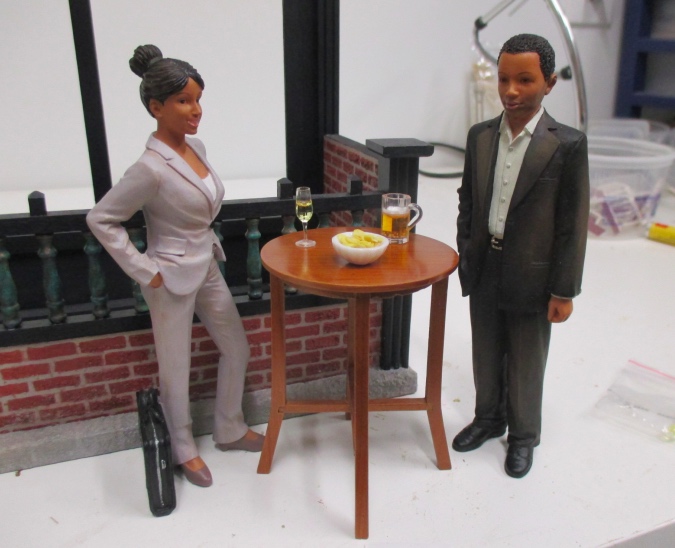 The potato chips are made from dried bell pepper seeds. 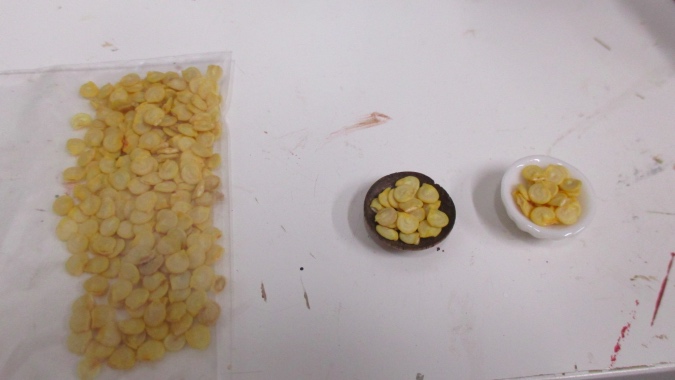 Here are the seated dolls. The first three are Houseworks dolls and the last one is Streets Ahead, from the UK. The quality of the Houseworks dolls is a lot better. (I actually bought four other Streets Ahead dolls that I didn’t end up using, because there’s such a noticeable difference in quality.) The dolls are top-heavy and kept falling off the chairs — and they haven’t even started drinking yet! — so I glued them down. 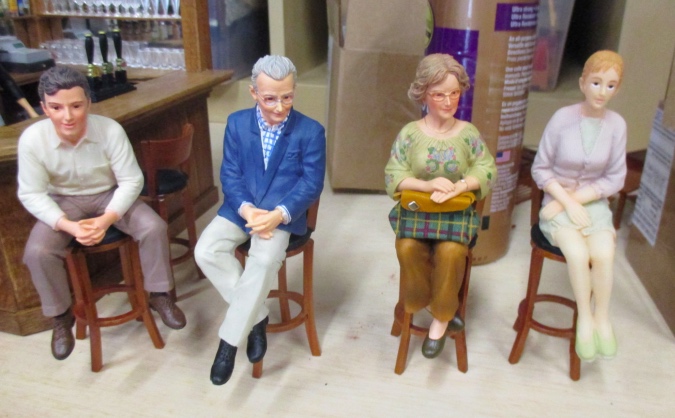 The older woman has her hands molded so they’ll rest on a tabletop. This works well when she’s sitting at a table, but the bar is too high. I put a handbag from Elf Miniatures on her lap to fill up the space. 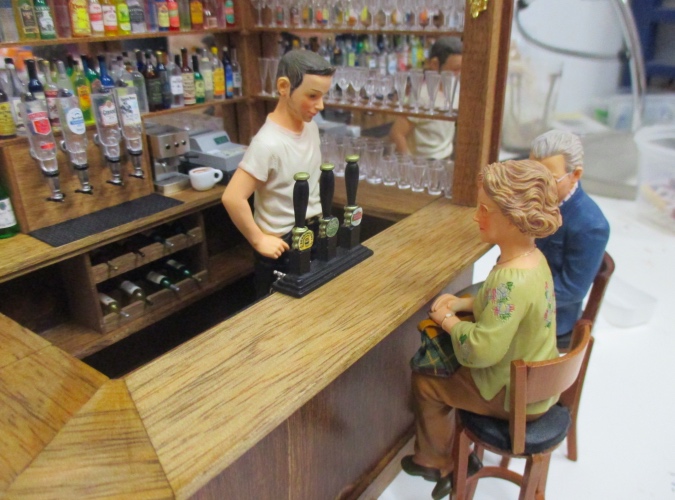 This is the only non-resin doll — she’s a plastic Sons of Anarchy action figure who I guess is part of a motorcycle gang (never seen the show). I thought she’d make a good bartender. Her right hand is molded into an awkward position (she’s supposed to be holding a skateboard). 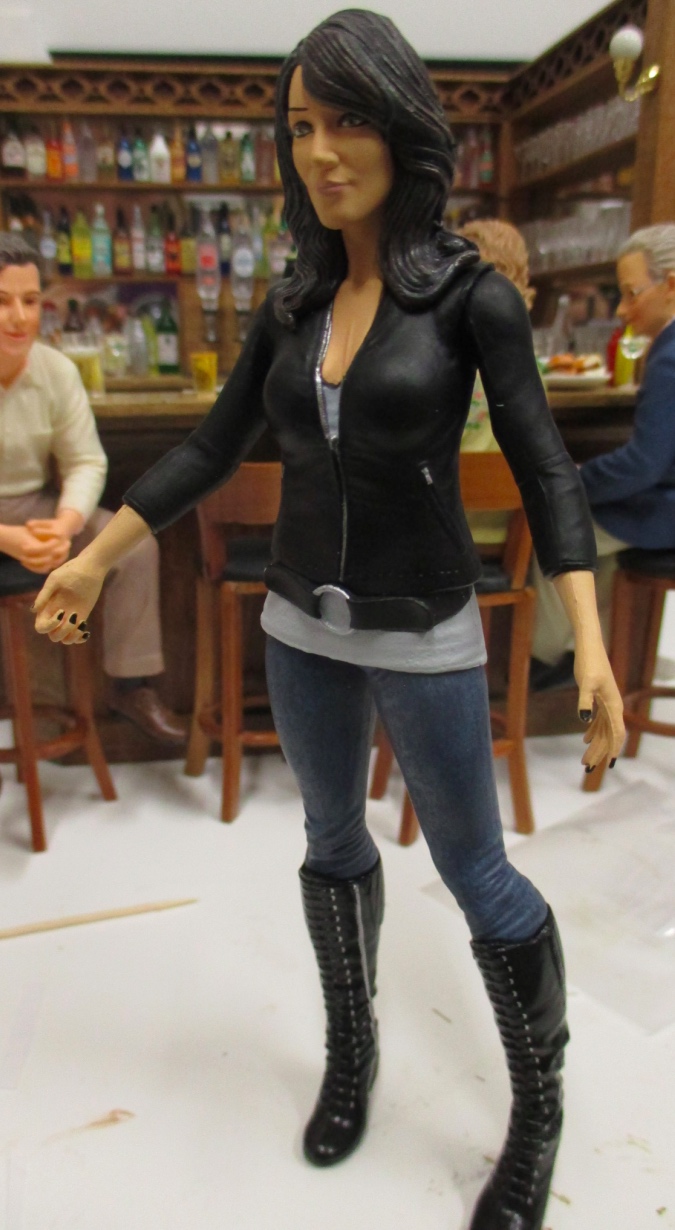 Problem solved! I made this money by resizing and printing pictures off the internet. 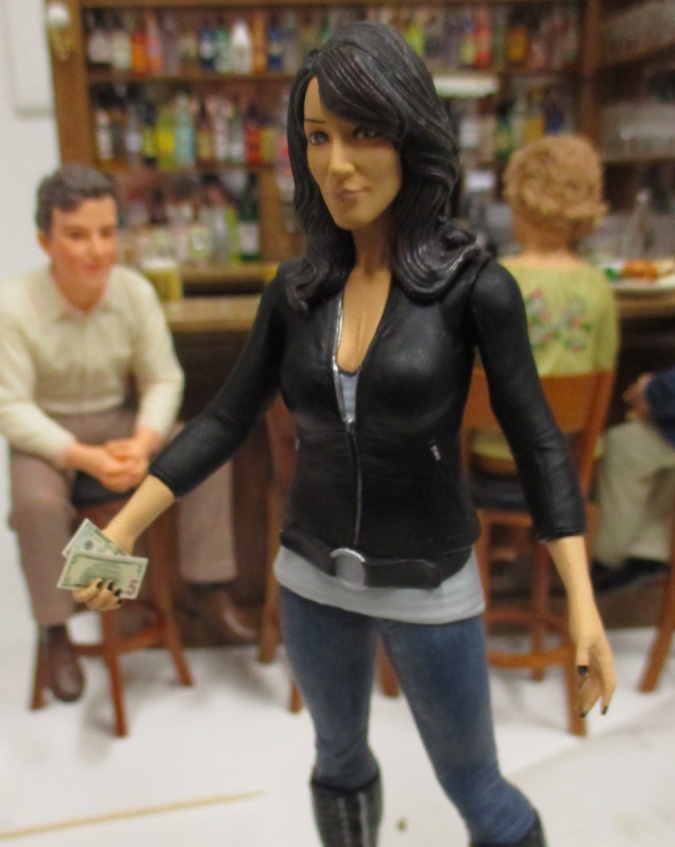 Her pose is still kind of awkward compared to the resin dolls, but at least now she has a reason for that claw hand. 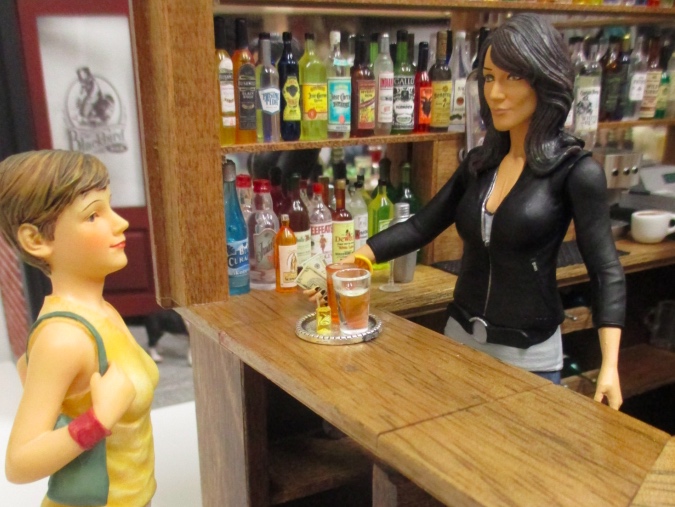 There’s a lot of shelf space below the bar that needed to be filled up. I used Smuckers jelly containers (the kind you get at restaurants) to make bus tubs for dirty dishes. The container on the left is how it looks after you clean the jelly out of it. The one on the right has had its rim cut off. 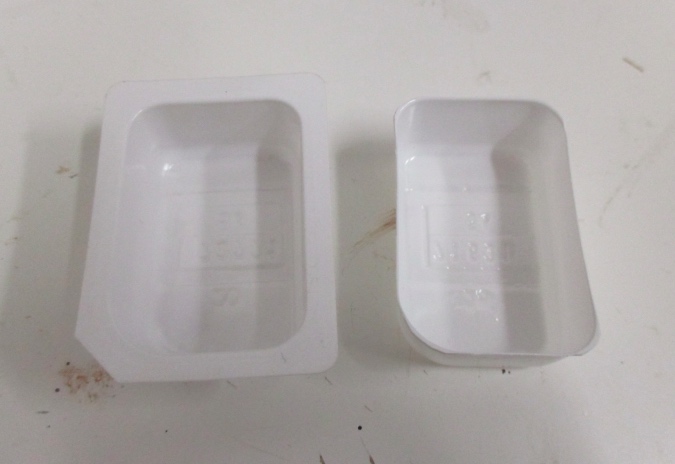 I cut the rims off both of them and painted them black. I put dishes in one and some extra bottles in the other.

I have no idea if you’d find something like this behind a bar, but they fill up some space! 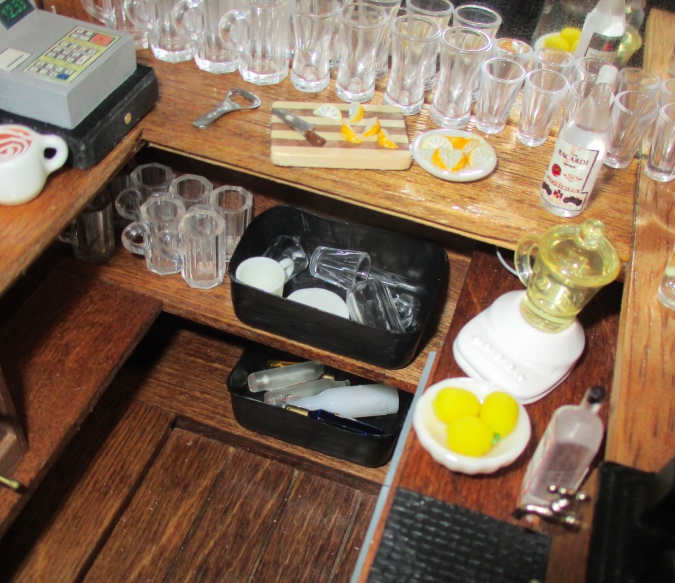 Ever since I saw the sliced lemon in the Henchman Pub I’ve been looking for a prep board like that, but haven’t been able to find one, so I improvised. The lemon slices and whole lemons were purchased separately (the slices are Bright Delights brand, not sure about the whole lemons). 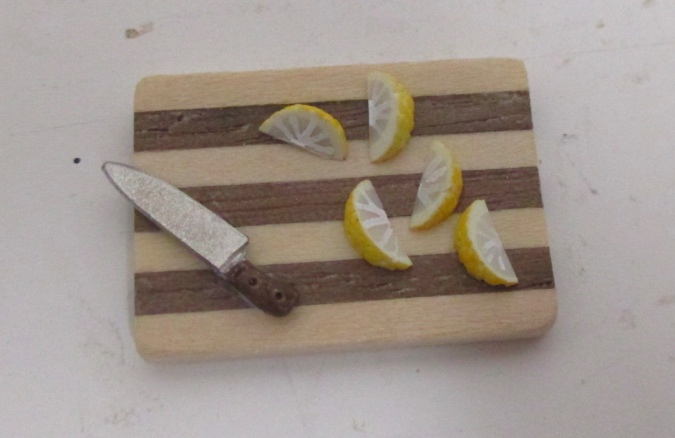 Next I made ice cubes. I had bought a bag of ice cubes years ago but when I put them in the scene they looked huge and ridiculous. I turned to Google and found this video for what might be the simplest mini tutorial ever, for ice cubes made from plastic needlepoint canvas. Just separate a strip from the canvas, and then cut off the nubs. 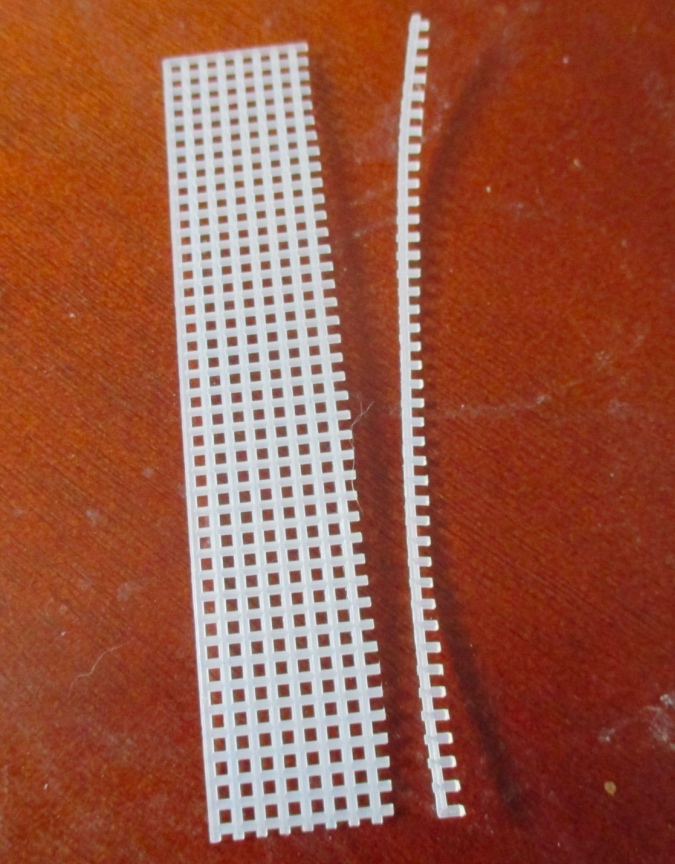 The ice cubes on the left are the ones I bought. The ones on the right are the cut up plastic canvas. So much better! 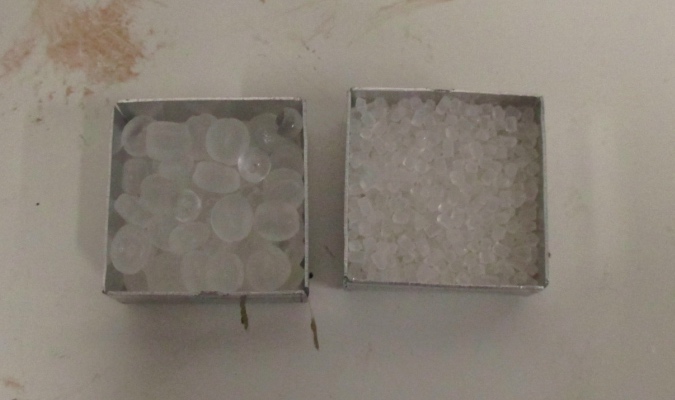 I filled up two bins of ice and tucked them under the bar. Luckily they won’t melt. 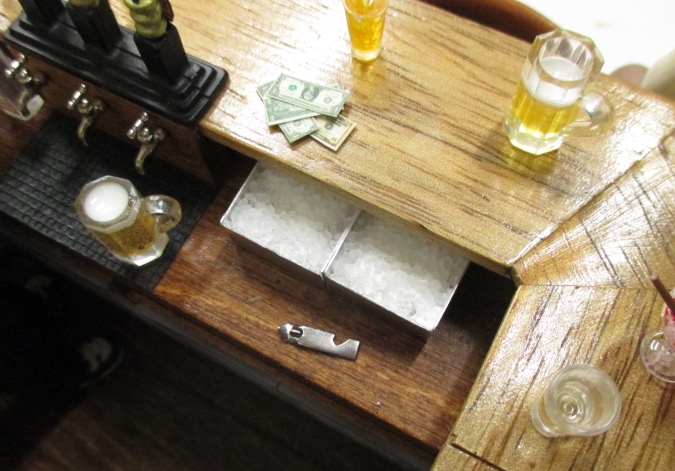 Finally, I made straws from plastic sequin pins I got at Michaels. 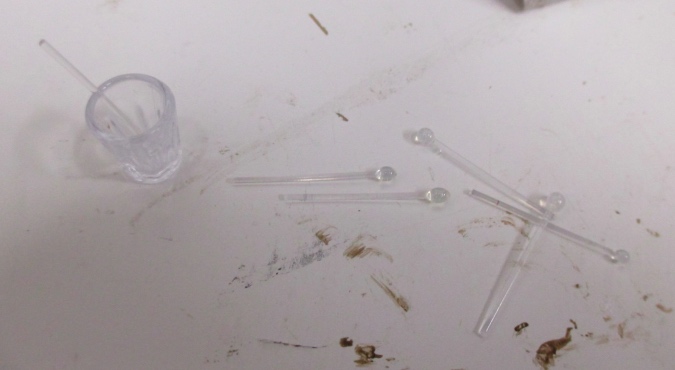 I just cut them down and glued them into a glass. 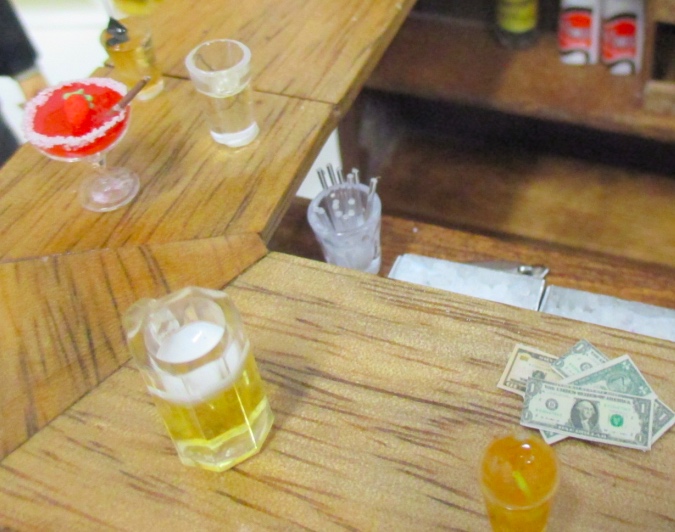 The older couple need silverware for their dinners, but other than that I think I’m done. All of the accessories are stuck down with museum wax. 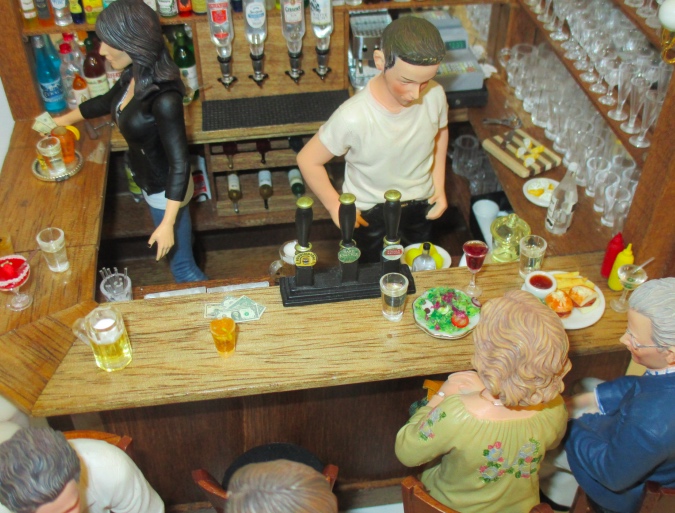 With the accessories added, I moved the bar into the roombox. (Look, the lights still work!) All of the dolls that are standing are stuck down with wax except for the female bartender — the wax didn’t want to adhere to her plastic shoes. Hopefully she’s not drinking on the job. 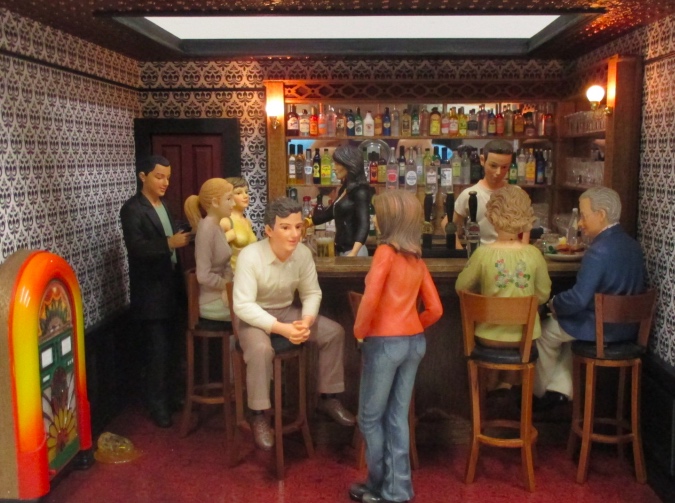 This guy’s chatting up a stranger while his girlfriend is in the restroom. (Jerk!) 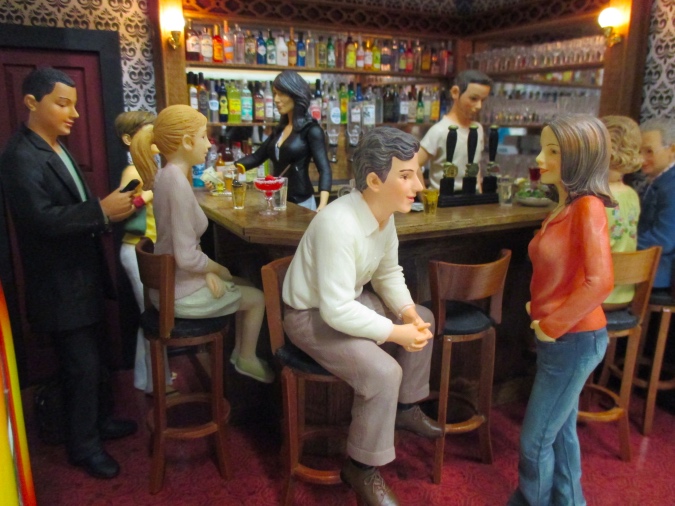 The older couple is here for dinner. They’ve been coming to this place for years. (Where was the dinner prepared? Don’t ask!) 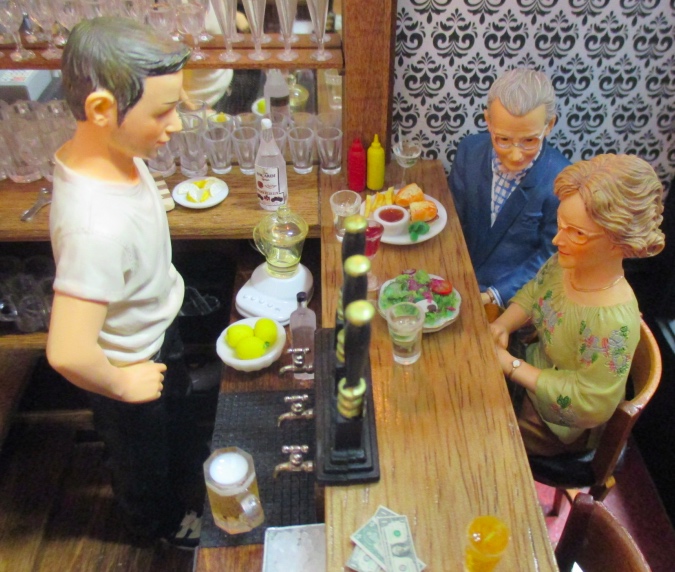 The blonde is on the most boring date of her life — he won’t put his phone down! Not even that giant strawberry margarita can salvage the evening (but it’ll help). Meanwhile the lady buying drinks is trying to keep an eye on her friend — doesn’t she know that guy has a girlfriend?! 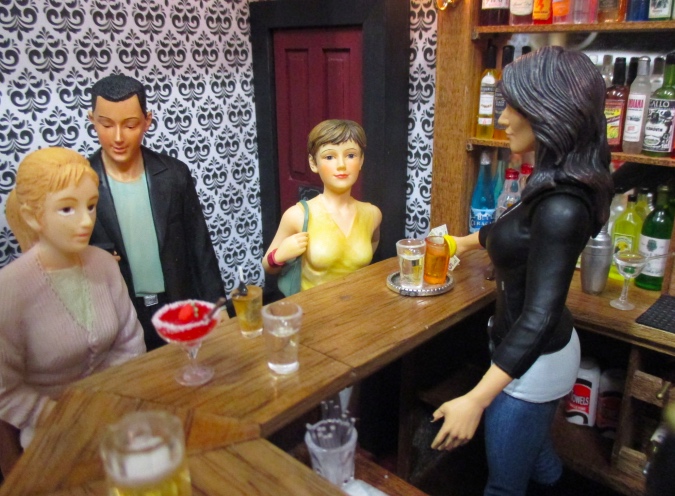 The night is still young, but there’s already been a casualty! 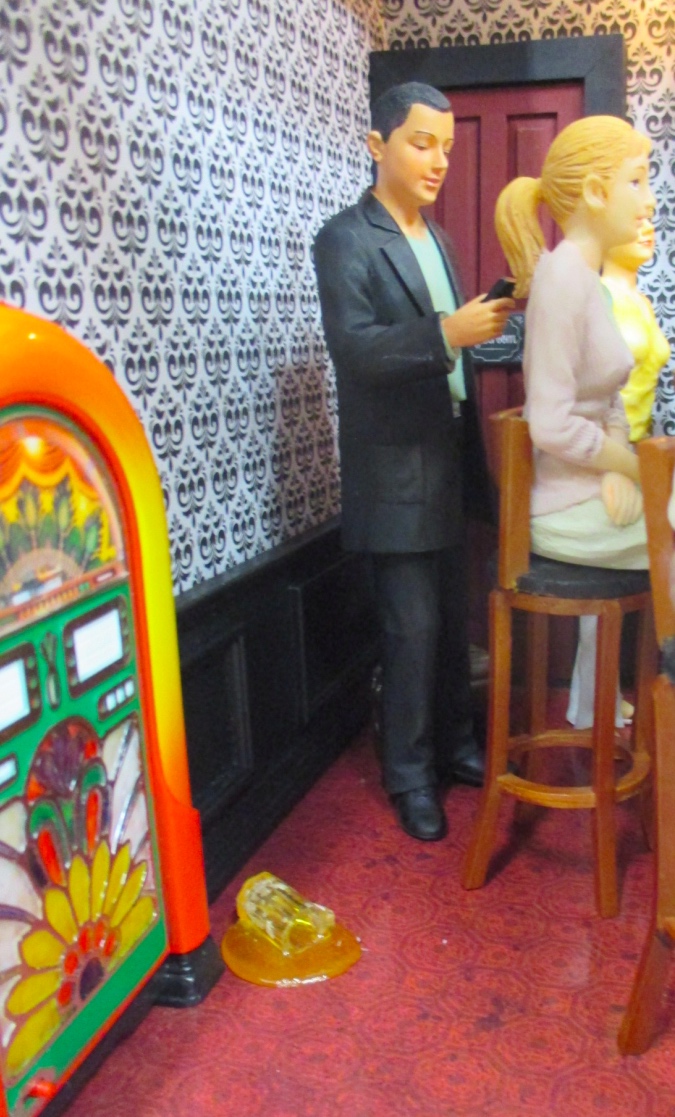 These two are grabbing a drink after work. 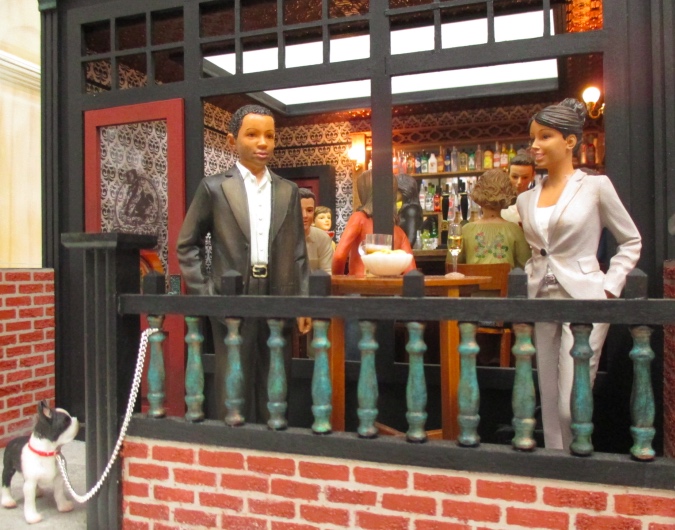 Poor Max wants to join the action inside… or at least be offered a potato chip. 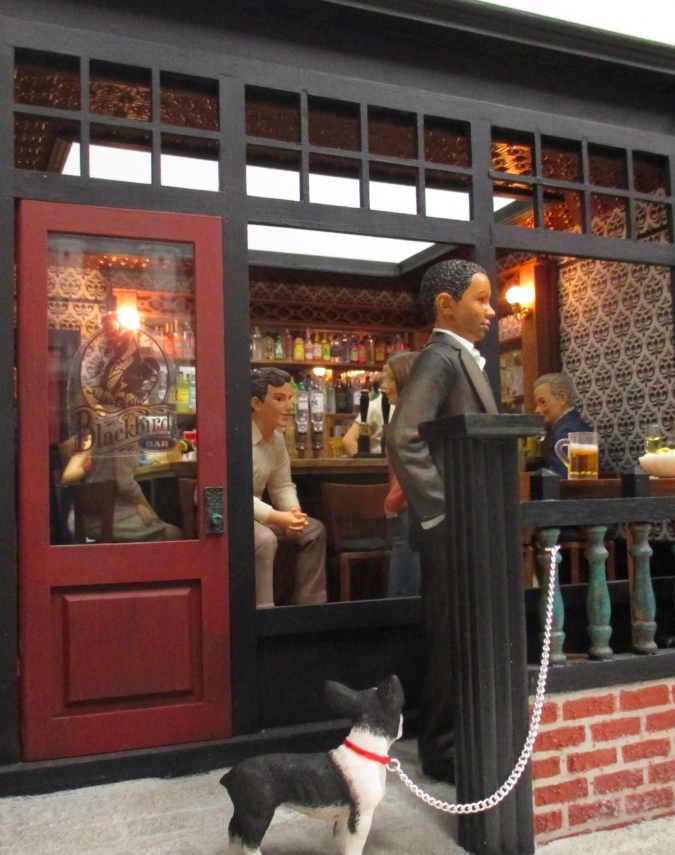