When I first started working on the Victorianna — four years ago! — I bought a pack of Grandt Line windows planning to use one in the kitchen. 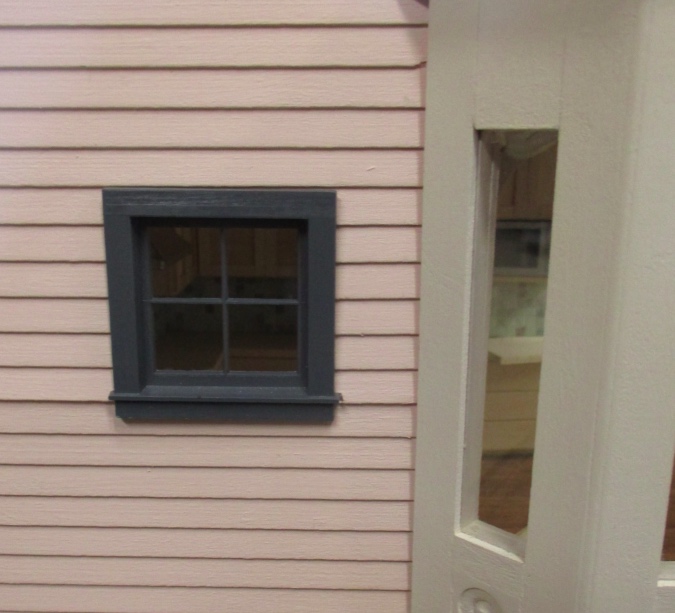 It wasn’t as deep as the plywood wall + siding. I always figured I could do something with strip wood to make up the extra space. 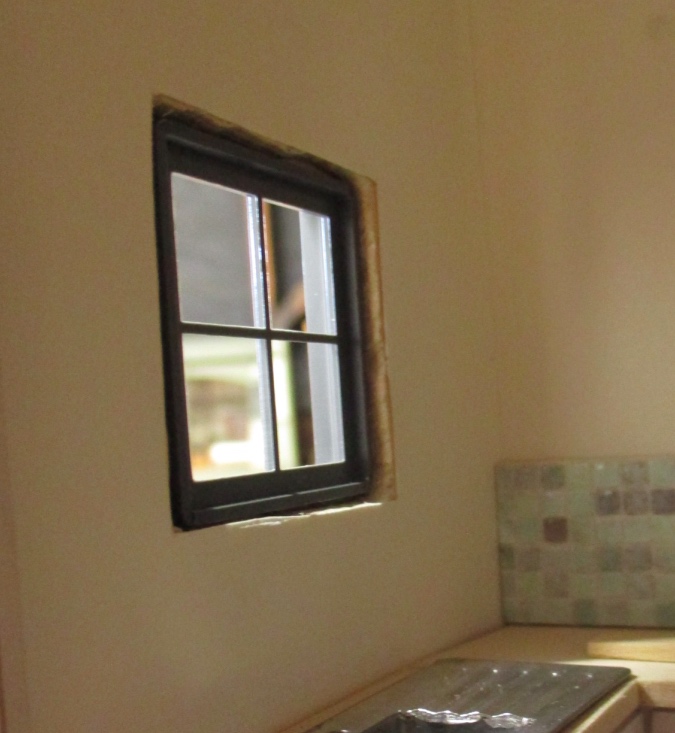 Well, when it came time to finish the window I spent an afternoon messing around with strip wood, and I couldn’t come up with anything that would play nicely with the window *and* the backsplash. It didn’t help that the window is deep inside the room and I can’t see it straight on. I was starting to get frustrated (and a sore neck!) trying to figure out something that would work. 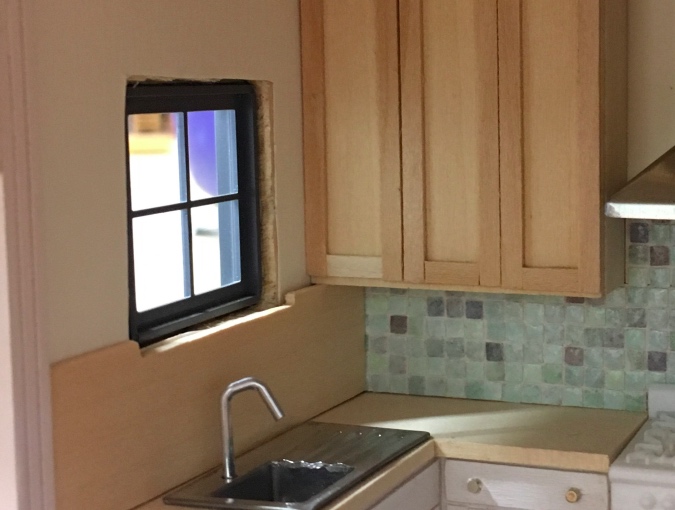 Houseworks windows are slightly deeper than the plywood wall + siding, but don’t come in this size. (The closest is this square window but it was slightly too small.) I previously cut a Houseworks window in half to make a piano window for the dining room, and decided to do the same thing in the kitchen. 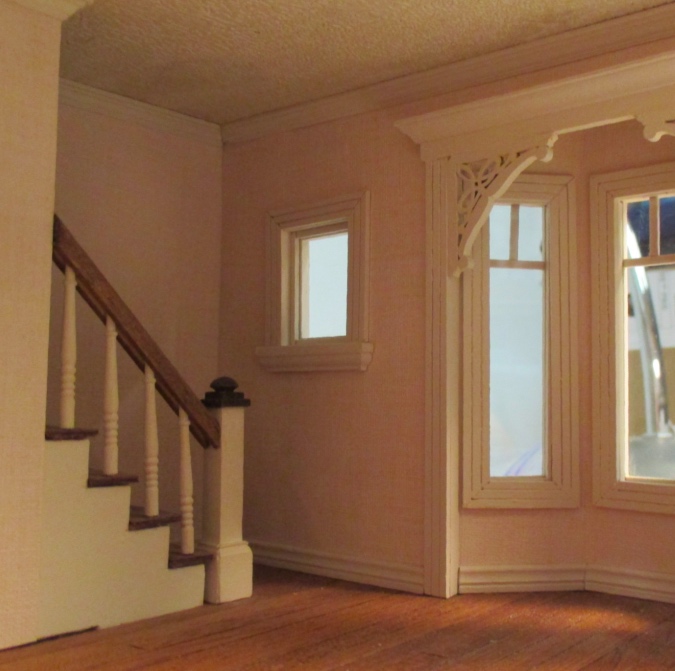 I don’t remember exactly how I did this before (hey, it was four years ago!), but I know I used the miter box to cut the window down. I tried that this time and totally mangled a window. Then I remembered a trick I’ve heard about putting the window in the microwave to soften the glue. I put a window on a plate and nuked it for 10 seconds. When I took it out, it fell apart in my hands. For once that was a good thing! 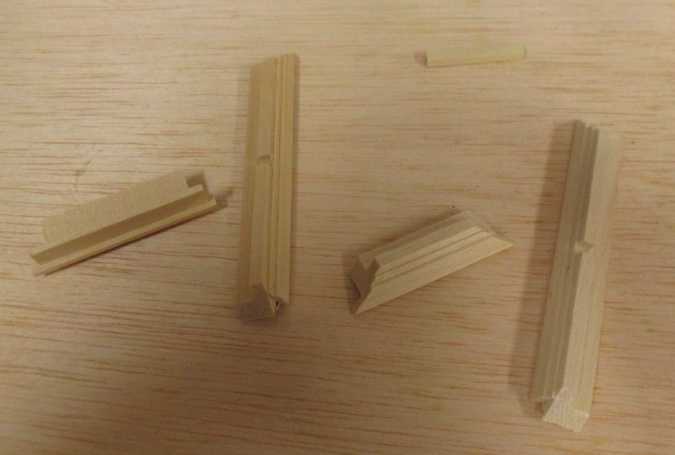 With the pieces separated, it was easy to cut down the sides to the correct height and then put the window back together. 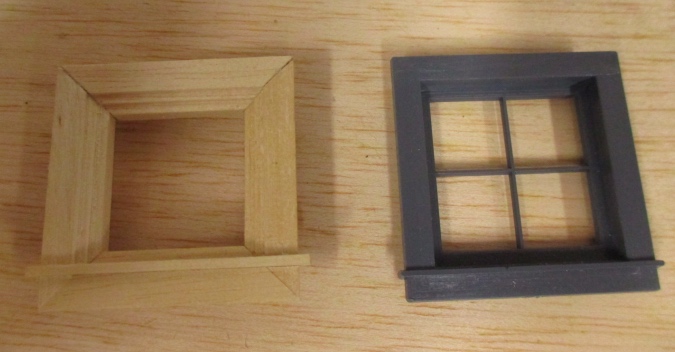 I applied glue and set the window in the hole to hold it square while it dried. 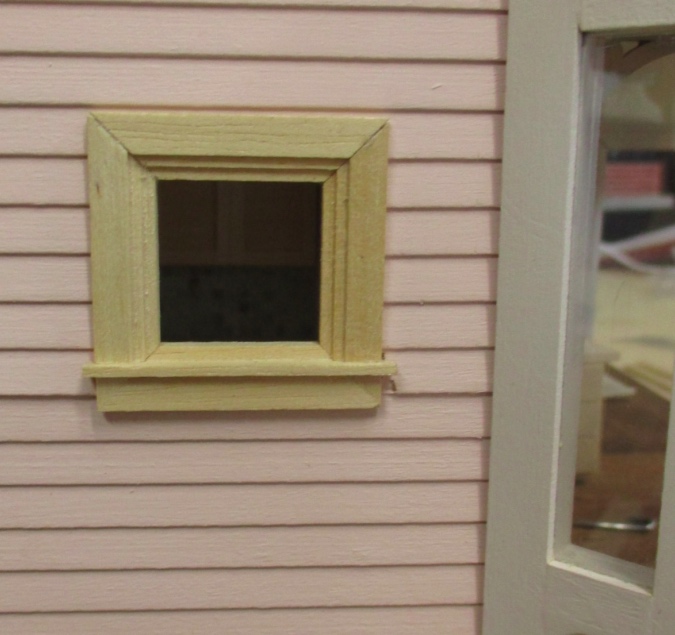 This protrudes about 1/16″ into the room, the same depth of the backsplash board. 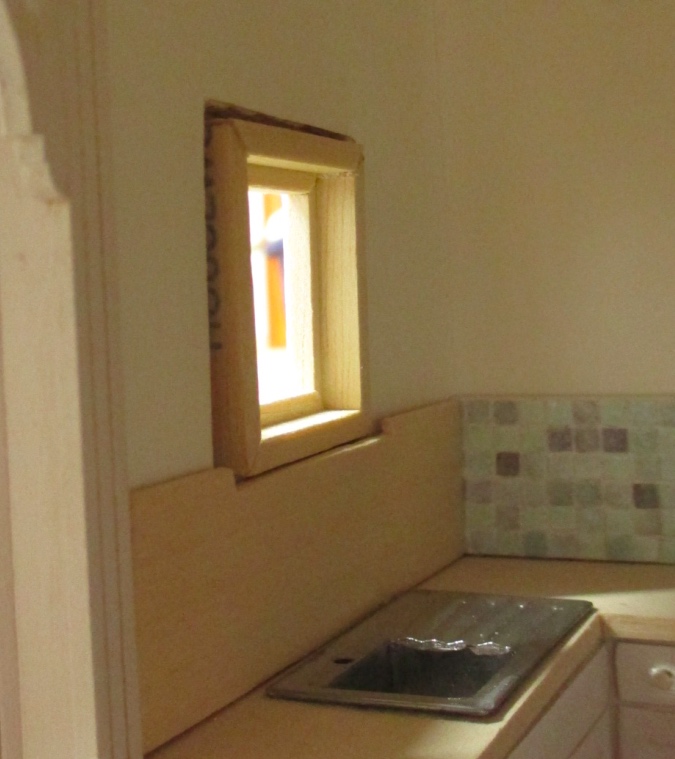 The piano window in the dining room and the two other non-bay windows in the house have sills made out of 1:12 cornice. The cornice is discontinued but I stumbled across a piece in my strip wood drawer, so I was able to make this window consistent with the others.

Next I laid the sill on top of one of the existing backsplash pieces, to get an idea of how it would line up with the tiles. I saw that I could fit four tiles in the top row before the sill started, and that the sill was the height of two rows of tiles.

With this in mind, I started tiling. I wanted to glue the sill to bare wood, not to tiles, so I left the area where the sill will go blank. (If you missed the post where I showed the tiling process, it’s here.) 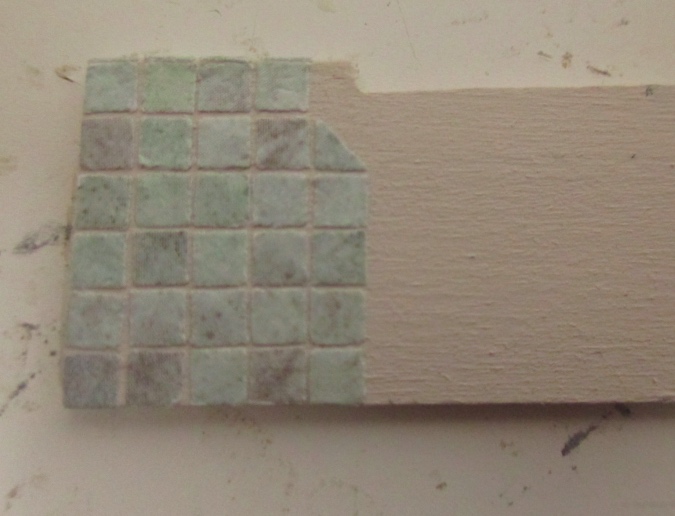 Since the top of the backsplash will be visible, I wrapped tiles over the top. 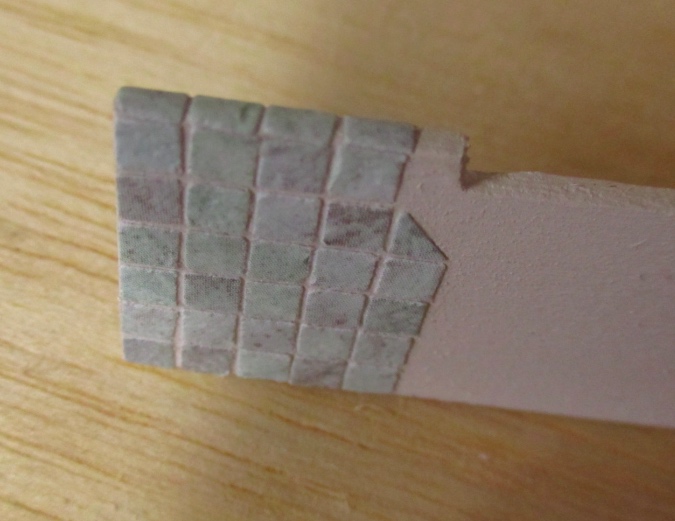 After doing the first five columns (up to the point where the sill starts), I did the full bottom row and then worked my way up. This helped keep the rows straight.

Here it is with all the tiles glued on.

Once the Gallery Glass on the tiles had dried, I glued the backsplash to the wall. It was a little warped so I used clamps. 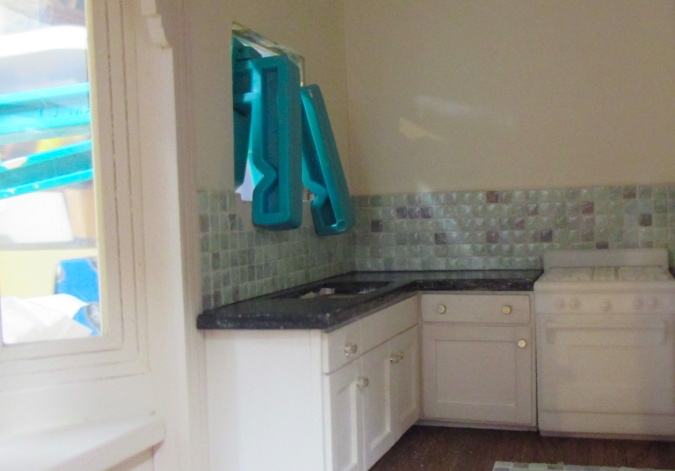 Here’s how it looks with the window. 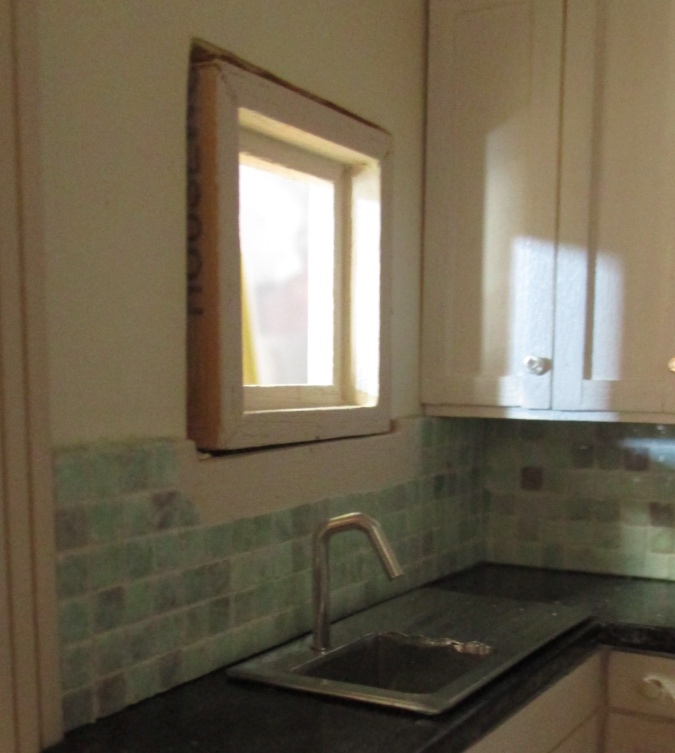 To cut down the plexiglass that came with the window, I scored it with a utility knife several times on one side, then flipped it over and scored once or twice on the other side. It snapped in half easily. I cut it a little bigger than I needed and sanded down the cut edge on the disc sander until it was just right. 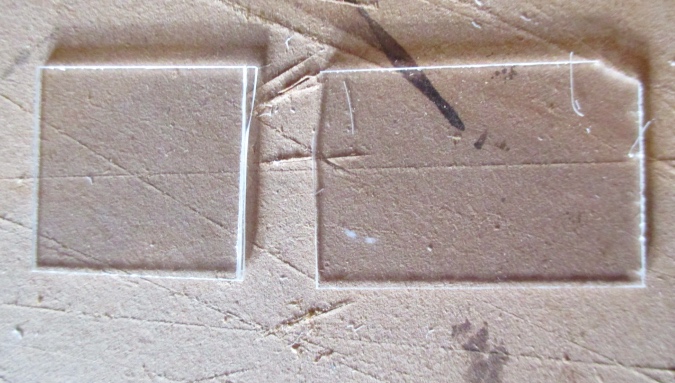 I cut down mullion pieces that came with the window to hold the plexiglass in place. 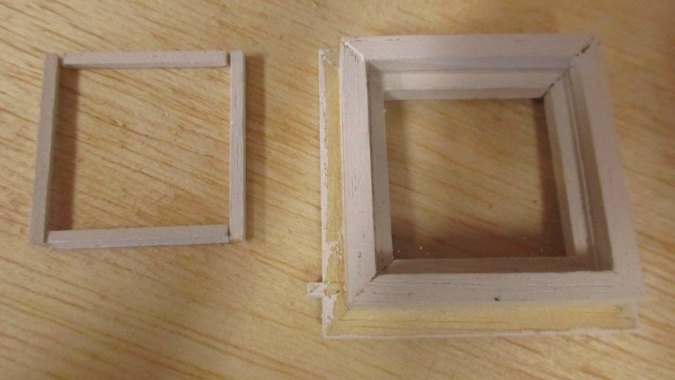 These are glued to the window, not to the plexiglass, which keeps glue smears off the window. 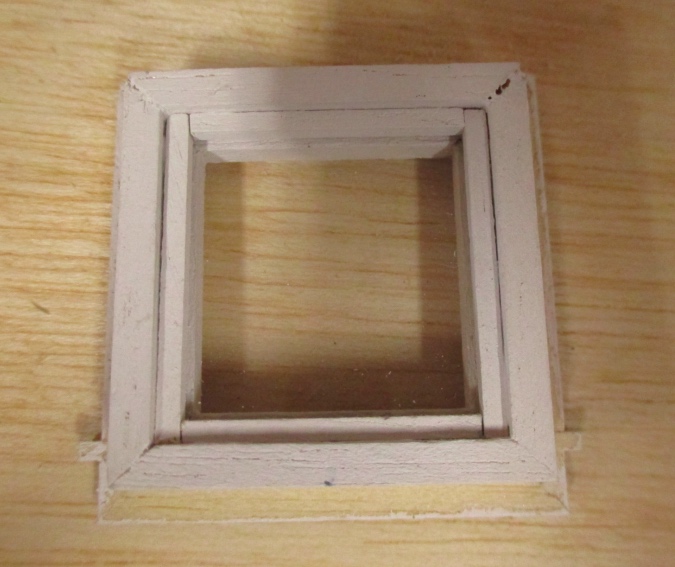 Next I prepared the trim pieces with a 1/16″ shim attached. 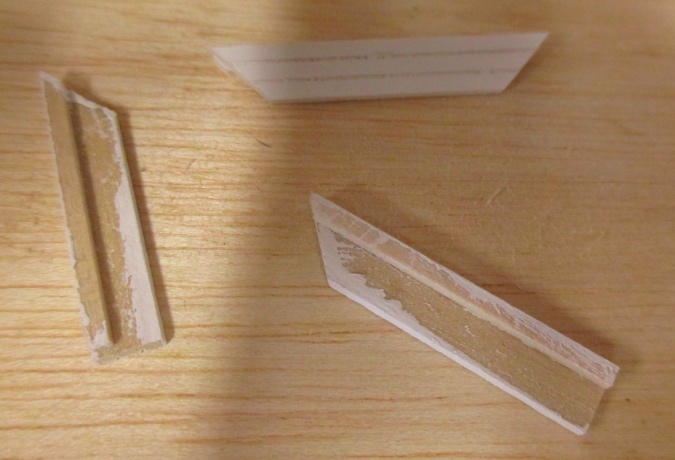 Getting the pieces on there wasn’t easy due to the angle — it was hard to reach and hard to see what I was doing. Here’s what I eventually ended up with. 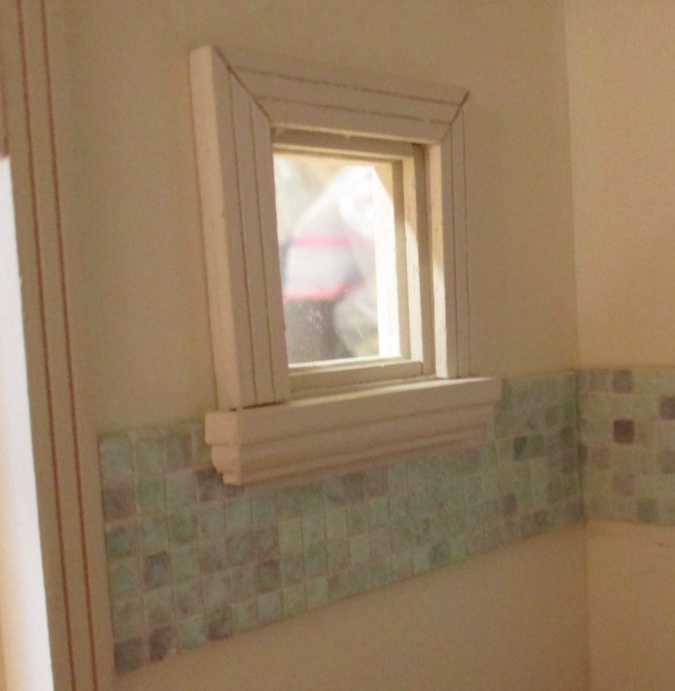 I removed the window trim pieces, prepared new sides that were slightly longer, and redid it with the bottom of the sill just above the third row of tiles. This gives the bottom of the window a stair-step look that’s not as clean as I wanted, but really, who cares? It’s fine. 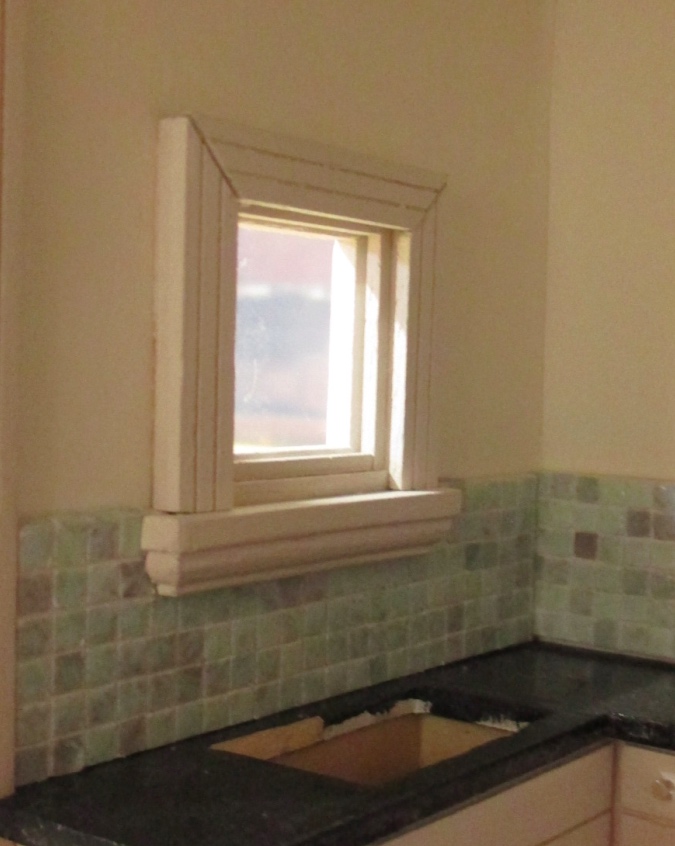 I added wood filler to the seams and touched up the paint the best I could. Maneuvering the paintbrush around in the back of the room isn’t easy. 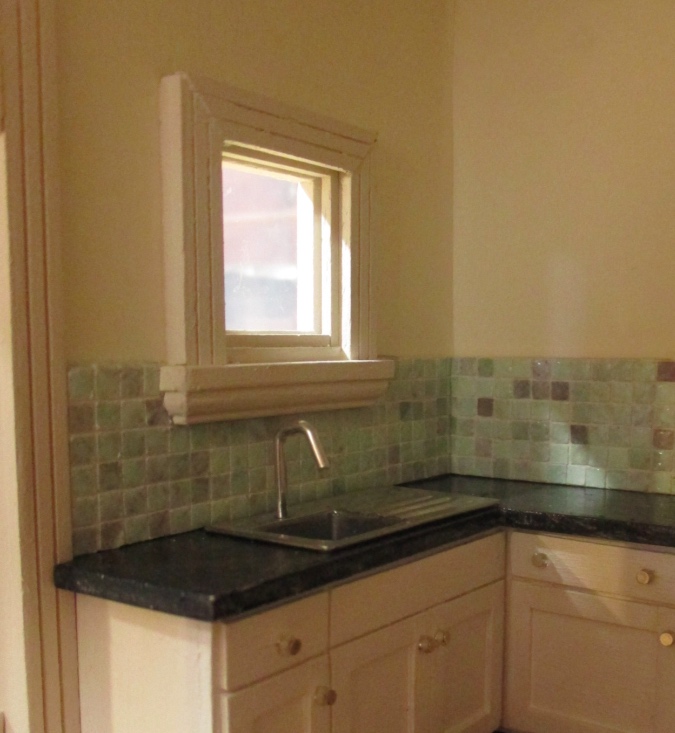 Here’s how it looks from the outside. There’s a little piece of broken siding just behind it that I should have fixed with wood filler before I glued the window in, but I just didn’t feel like it. The back side of the house is going to be against the wall so, again, who cares? (Can you tell that after four years I’m ready to be DONE with this house?!) 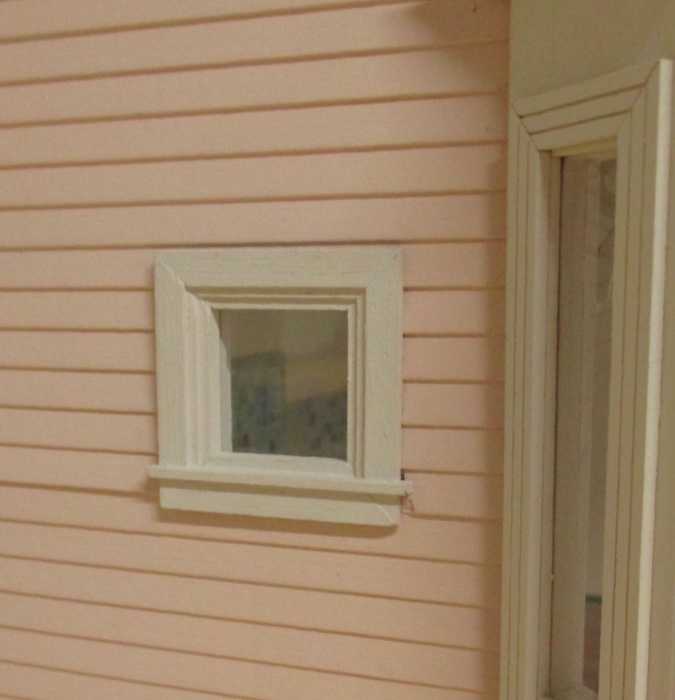 With the window in, the kitchen is almost finished! Tune in next time for the grand finale.