Work has stalled on the Turret House since I last posted about it in October. That’s partly because we had a ginormous storm at the end of October and my workshop flooded. I didn’t take a “before” picture (since I was frantically moving things out of the way before they got wet), but here’s the “after”… 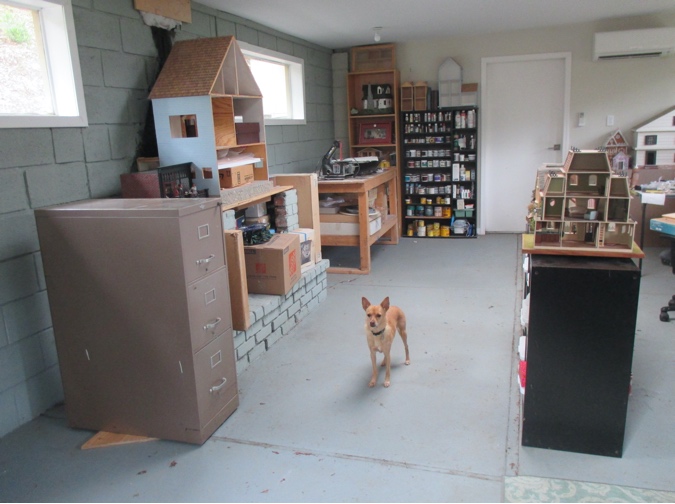 (This picture isn’t nearly as dramatic as it was with water all over the floor!)

Thankfully the flood wasn’t caused by a leak, but by water that blew in underneath the door. The floor isn’t level and it’s lower on the side Rosy’s standing on, so the water pooled on that side. A few cardboard boxes that were stashed under the wooden workbench got damaged, but I was able to get the contents out of the boxes before what was inside was ruined.

I quickly moved everything that was on that side of the room to the dry side, which required “putting away” a lot of what I had in progress for the Turret House. “Putting away” is in quotes because I just tossed it all in boxes or stashed it on the desk and everything in progress that had been “carefully organized” (again in quotes!) was now in places where it shouldn’t have been, and hard to find later. 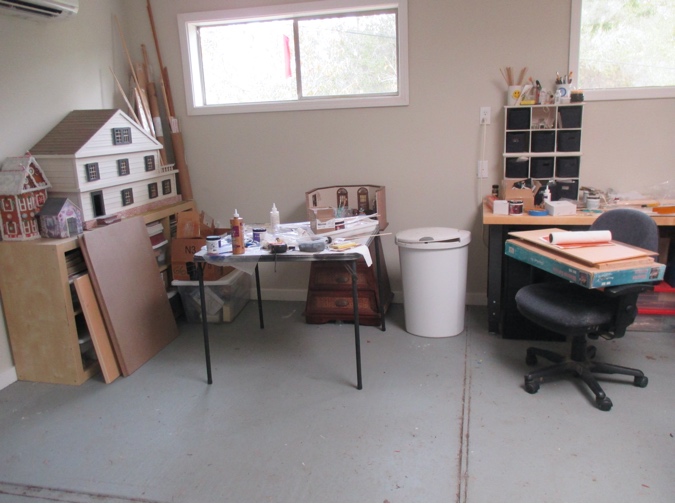 Long story short, this disrupted my flow on the Turret House and I’m only dipping my toes back in now. (Metaphorically, not literally! Geoff installed a storm door, which seems to have solved the water problem.)

The other reason I got distracted from the Turret House is that I started working on my items for the annual half scale swap. But I can’t show those off until March or so, so pretend I didn’t say anything about swaps.

Anyway, as of last weekend I’m back to work on the Turret House, and although I haven’t made major progress, it’s been such a long time since I posted that I figured I might as well. First up, the foundation.

I’m going with the old standby, egg carton stones, because I couldn’t come up with a better idea and I just wanted to get SOMETHING done. These blocks are 3/8″ x 3/4″. I used 1″ pieces at the corners where they wrap around. 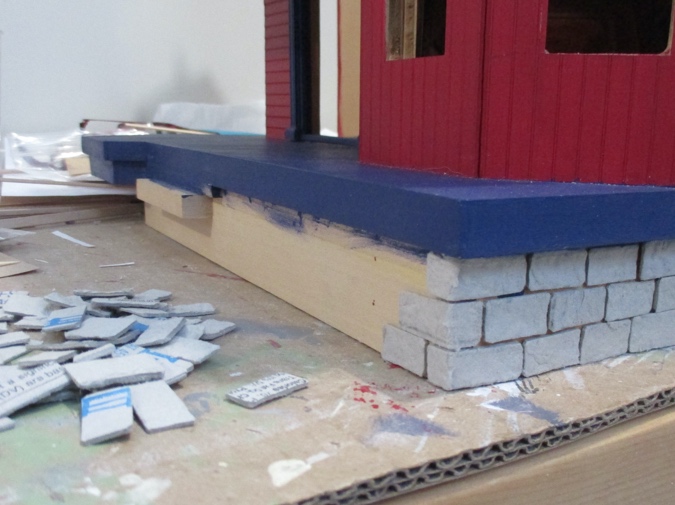 My plan is to paint these black, including the grout. 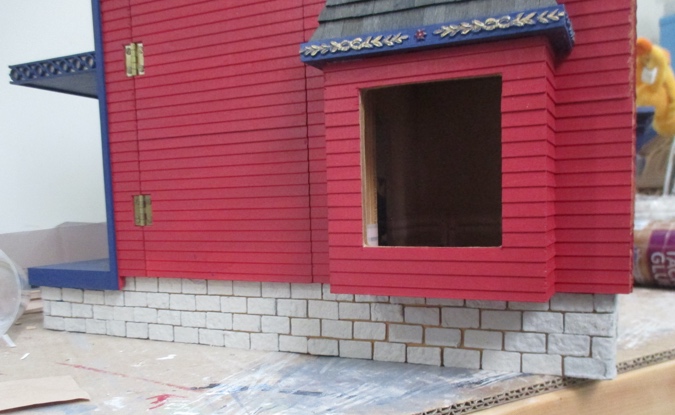 When I got around the back of the house, I remembered why I hadn’t started the foundation sooner: the junction splice is back here and I haven’t decided yet if I want it there. 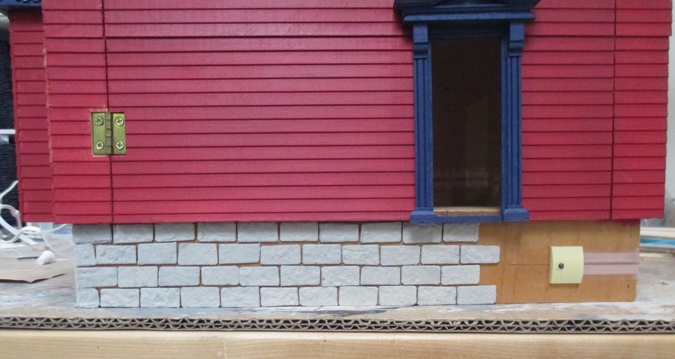 My Queen Anne Rowhouse has electrical outlets and the junction splice hidden under the house and I might do the same with the Turret House, but first I have to give some thought to which lights will go where and look more carefully at the tape wire that’s already installed. So, I gave up on the foundation pending those decisions.

While I was working on the foundation, I noticed that this panel was very tight and difficult to open. I thought it was because the floral trim was bumping the top of the corbels. I removed the panel to investigate sanding (which I really didn’t want to do, and risk damaging what’s already been finished), and I found that the panel swings easily if it’s all the way flush on the left. 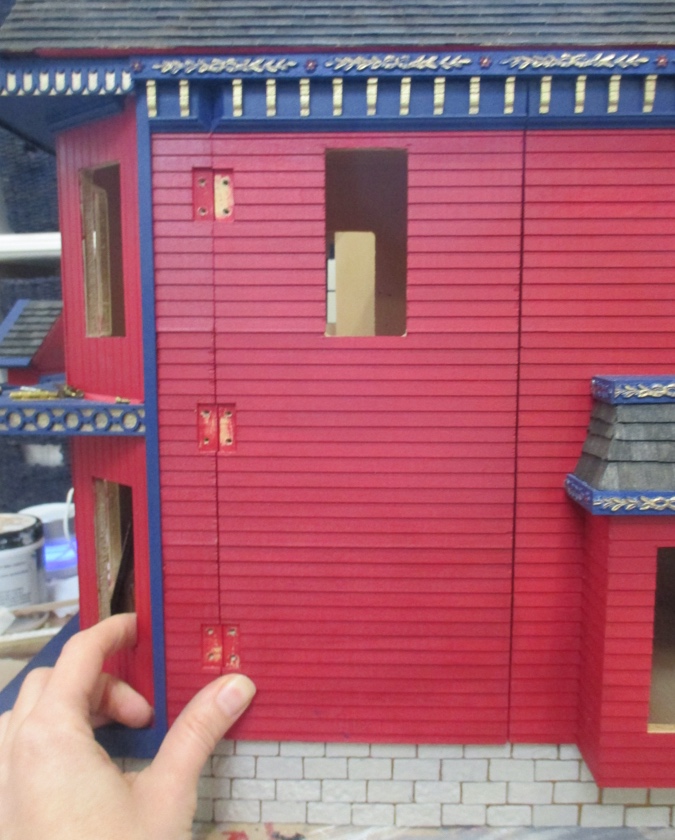 Presumably this means I can fix the problem by repositioning the hinges to allow the panel to sit this way. 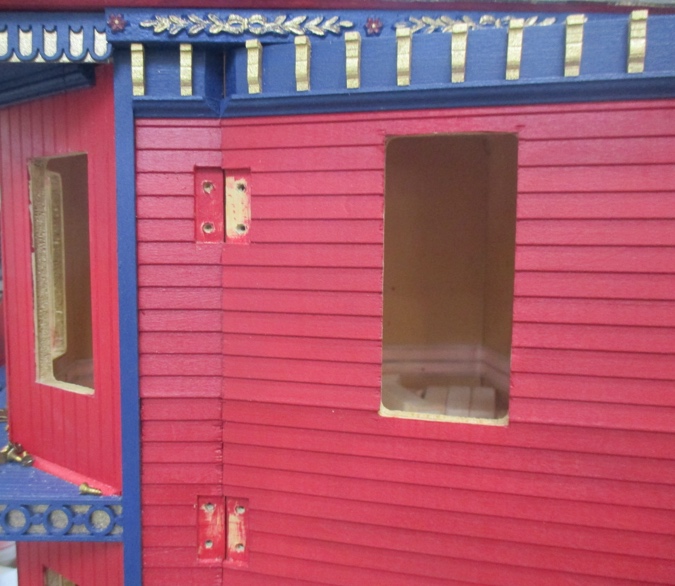 The top and middle hinges won’t fit into the cutout squares with the panel all the way to the left, so I’ll try enlarging them. 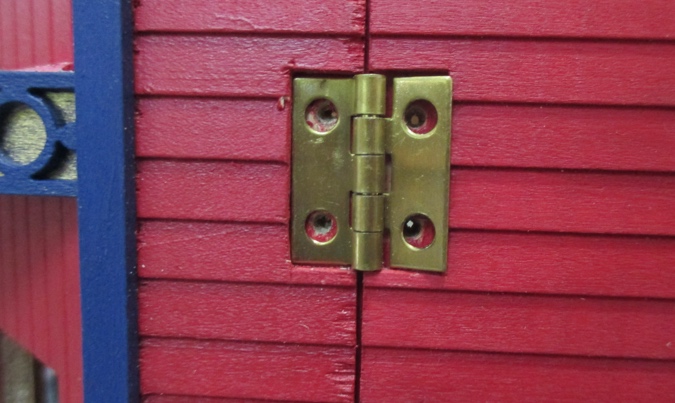 And all three of them will need to have at least some of the holes re-drilled, since the current holes won’t allow me to screw in the hinges where they need to be. 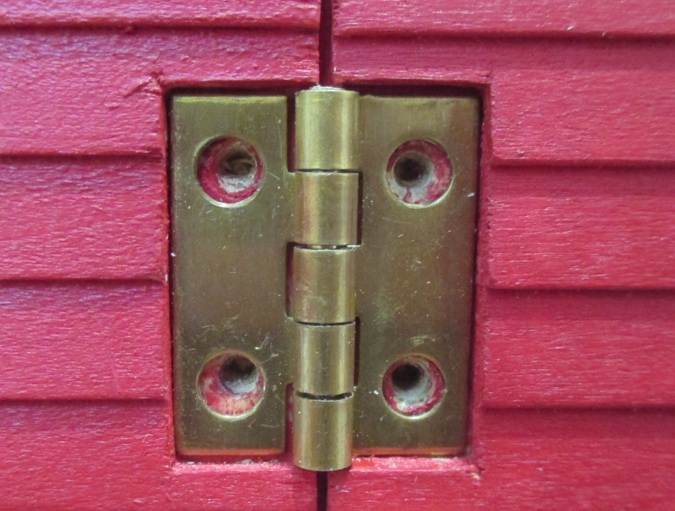 I was able to do a little bit of work on this today, but then Geoff needed my help with something on the real house and the afternoon disappeared. Same time next weekend…?

Half scale how-to: jam, brie, crackers, and a champagne bottle

A brief history of Bauder-Pine (and a new dollhouse!)