My kingdom for a closet

It has always bugged me that dollhouse bedrooms tend not to have closets. In a real house, you can’t call it a bedroom if it *doesn’t* have a closet, but if you want them in a dollhouse, you usually have to make them yourself. Luckily, they’re pretty easy to make.

In my first dollhouse, I made a bedroom closet out of a Houseworks split door. And the Orchid has a coat closet made from a Timberbrook kit (unfortunately they’re now out of business). I intended to add closets to the Fairfield bedrooms—the nooks on the side of the chimney are the perfect spots—but since it’s hard to get my hands in there, I got lazy and skipped them. (Maybe someday…) But I did give it a pantry in the kitchen to make up for it.

Now I’m finally back to work on the Westville, and I’ve spent the past two days wallpapering and—you guessed it—building closets.

First up is the master bedroom. Another thing I dislike in dollhouses is how the stairs often lead right into the rooms. You rarely find miniature hallways, especially in “small” houses like this one. Rather than installing a banister as designed, I decided to close off the stair hole with walls. This creates a funky-shaped nook to the right of the stairs where I originally intended to put a double-door closet. But at some point over the last five years I got a nice dresser that fits well in that spot. Goodbye, double-door closet. 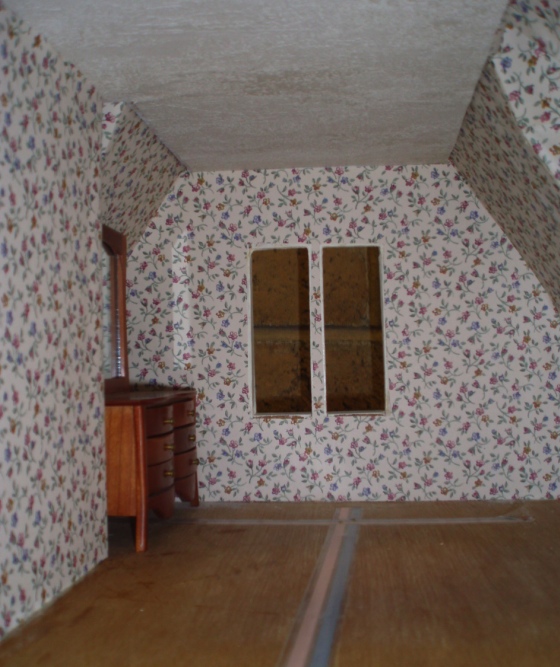 On to Plan B: a smaller closet in the opposite corner. This door is also a Timberbrook door—a smaller version of the one I used in the Orchid. It’s a shame Timberbrook is out of business because I don’t think Houseworks or anyone else makes a louvered door like this. It slides open on a track, very realistic. 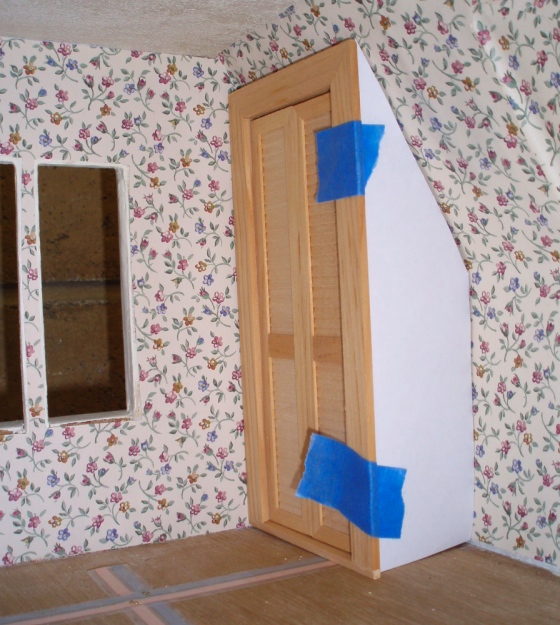 I cut the wall out of foam core and wallpapered it. 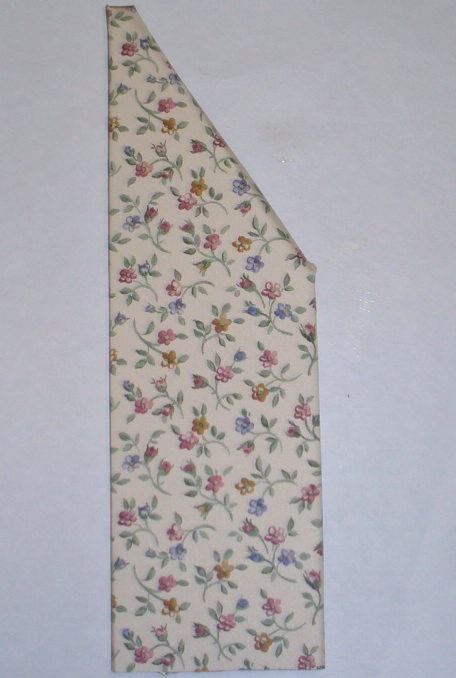 I learned the hard way with the Orchid that painting the louvered doors is very tedious and doesn’t come out looking that great. This time I stained the door. Much easier! 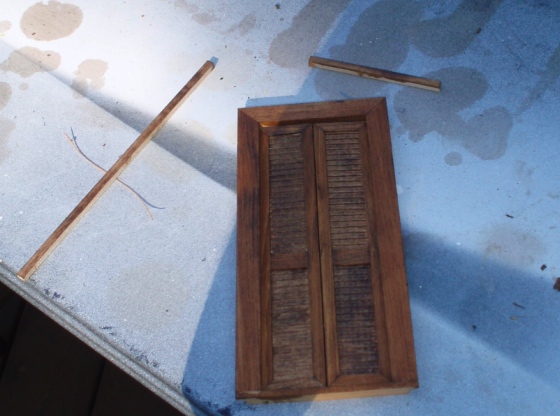 I’m not sure if I’m going to glue the closet into the room or not. I’ll at least keep it removable until the carpet goes in… and maybe even after that. Even if it remains a separate piece, I’ll add a baseboard to make it look permanent. 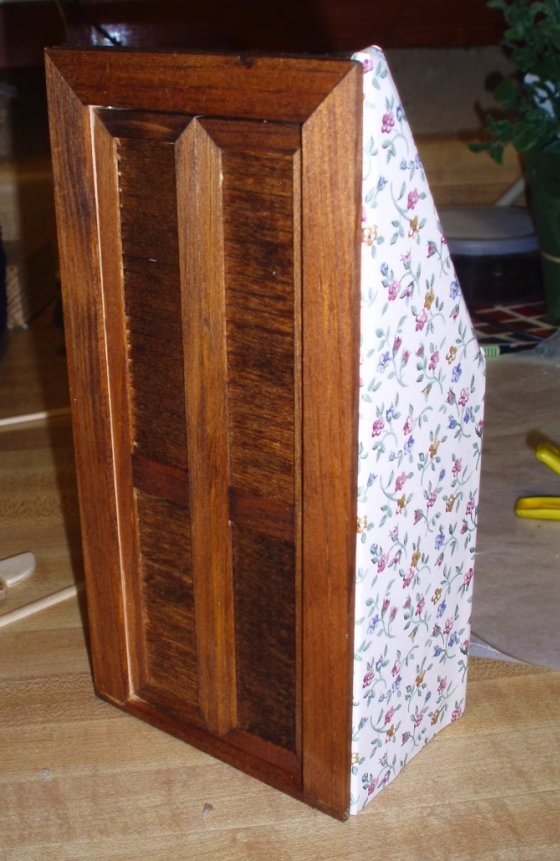 And here it is in place. Just like I’ve been imagining it all these years! 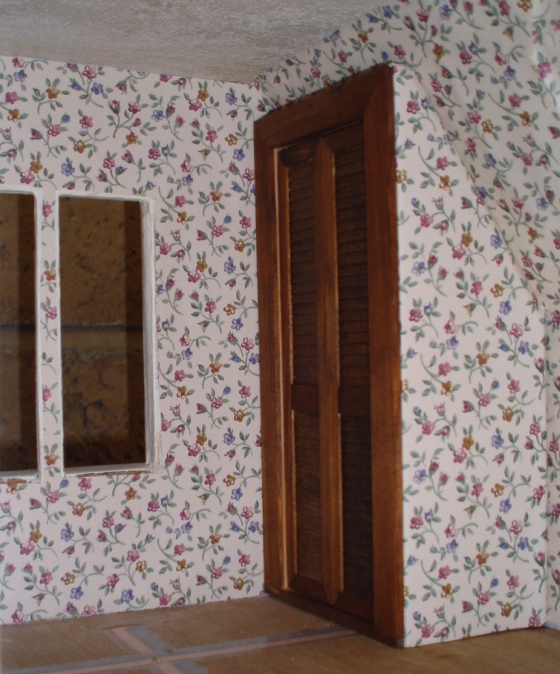 Due to its spot in the corner, it’s practically impossible to see inside the closet, so I’m not sure if I’ll bother decorating the inside. You *might* be able to catch a glimpse of it in the dresser mirror directly opposite. If I do end up decorating it, leaving the closet a separate piece that can be removed will make that much easier.

I’ve also (mostly) wallpapered the living room. The Westville is designed with a built-in coat closet under the stairs, so I can’t take credit for the idea, but I’ve upgraded the stairs and the door. I’m using a narrow door from the Handley House Classics line. This is as far as I’ve gone with this one, but I figured I’d post a picture of it while I’ve got closets on the brain… 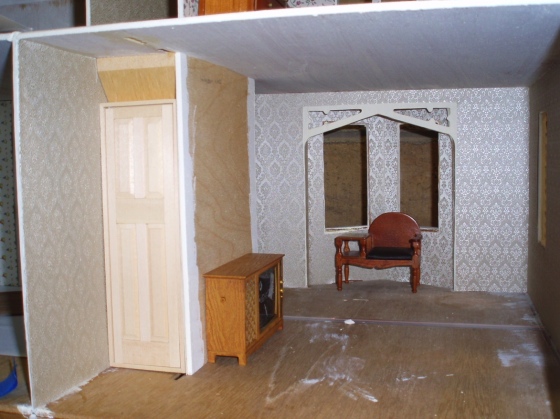 This will be a coat / storage closet, and I do plan to decorate the inside since I’m sure opening the door and peeking in will be the first thing everyone who sees this house wants to do…

After I finish wallpapering the remaining rooms, I’ll either tackle electricity or glue on shingles, depending on how ambitious I’m feeling. (Electricity being the more difficult task… oddly enough, I actually enjoy gluing on shingles one by one!)