The Rosedale has a really cute stairway. I like how it has a landing and then turns the corner, and also how the stairs are tucked out of the way, like in a real house. Since I’m bashing two Rosedales together, I have an extra set of stairs, so I decided to add them to the second floor leading up to what will be the third floor master suite.

I started by following the directions for building the first floor staircase. First you glue the left stringer to the wall, then glue the risers to the stringer, attach the right stringer, and add the steps. What could go wrong?! 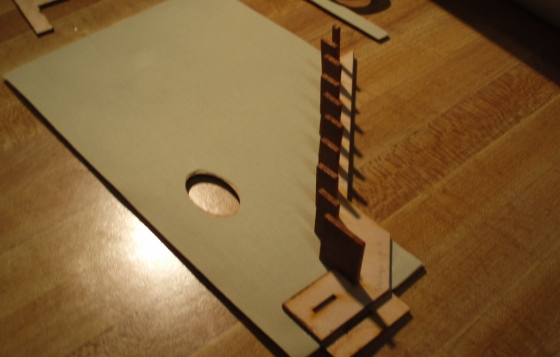 The stringer is actually flush with the front edge of the wall. I have a bit of extra wallpaper hanging over the edge, so there won’t be a seam where the two walls meet at the corner.

Actually this part went pretty smoothly. (Well, first I glued on the wrong stringer, but I caught it before the glue dried!) I used Crafter’s Pick “The Ultimate” glue which is strong, dries quickly, and best of all, dries white. The risers stood up pretty well—unlike the last time I tried building a stairway, when everything kept falling over.

A few tips for Rosedale builders: When you insert the “third riser” into the slot in the stringer (it’s the bottom riser in the photo above), make sure the top is flush with the top of the stringer behind it, rather than pushing it all the way down to the bottom of the slot. Mine didn’t line up at the top and as a result there’s a small gap where the third riser doesn’t quite meet the step above it. Also, the directions suggest that you should glue in the risers from the bottom on up; I recommend gluing in the top ones and working your way down, so your left hand doesn’t keep hitting the risers you’ve already glued and knocking them over.

Here’s the first staircase mostly assembled (I hadn’t glued in the triangular step yet when I took this picture). Notice the unstained part to the left of the landing. I should have stained the bottom part of the stringer; I didn’t realize it would show. 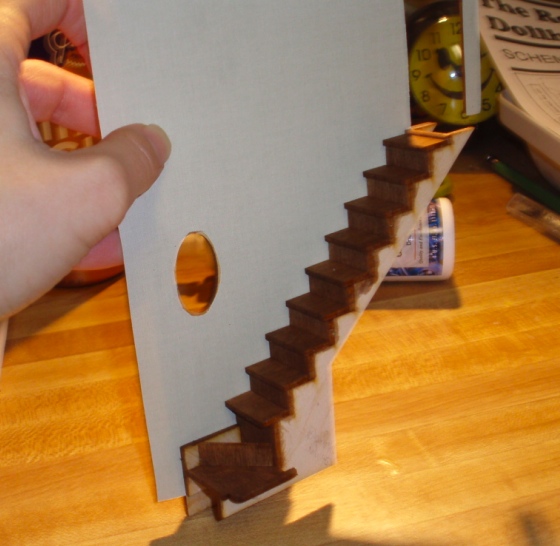 And here’s the view from the front. Once the house is assembled, you’ll only be able to see this view with the front door open. (The railing and floor are just set there for now, not glued in.) 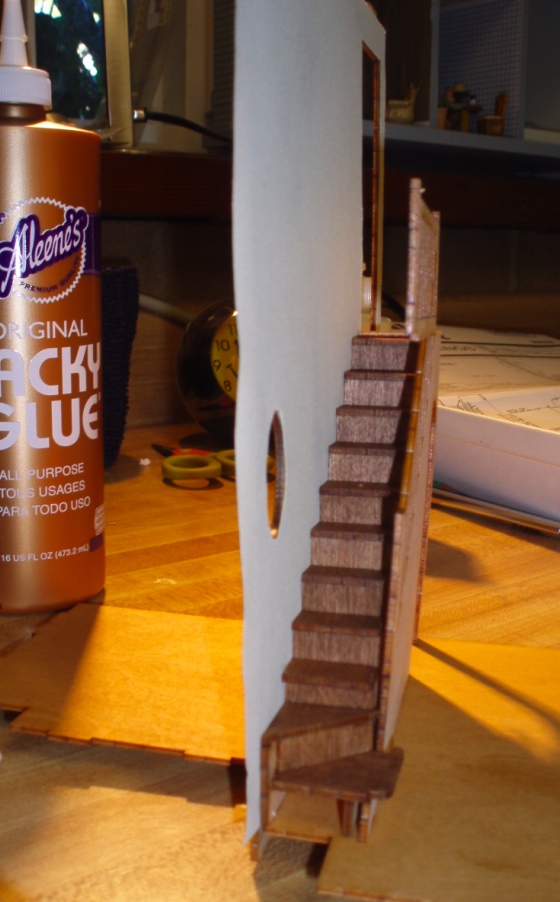 With one stairway down I was feeling pretty confident about the second one. I started by placing the stringer in the same position—flush with the wall in the front, and just above the floor slot at the bottom. The second story is exactly one stair height shorter than the first story, so I cut off a stair’s worth of the stringer at the top. The stairs slope at a 45 degree angle so I was able to use my miter box to make a nice straight cut. 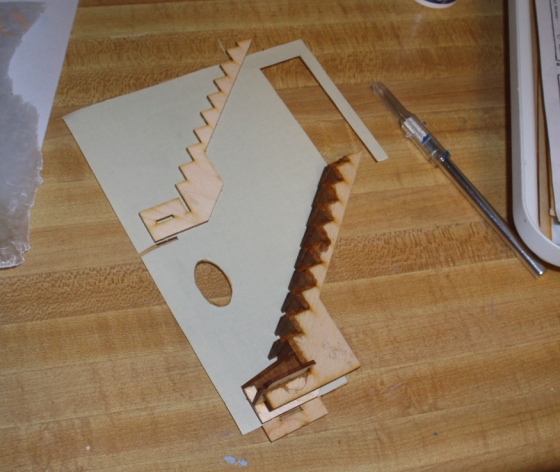 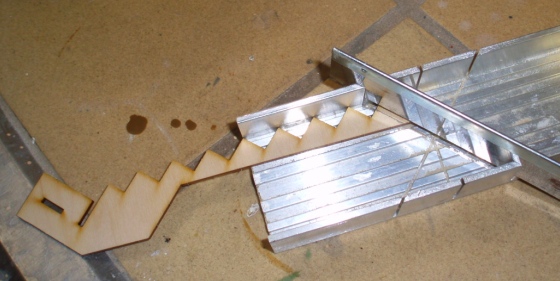 I noticed that the bottom of the stringers hang over the edge of the stair hole, which seemed like it would be weird from the perspective of someone climbing the stairs. I cut both stringers so they would end just at the edge of the hole and slope up at a 45 degree angle, like the rest of the stairs. The pencil mark below shows where I cut the left stringer; I then held the modified left stringer up against the right stringer (which is rectangular at the bottom) and used it as a guide to mark where to cut. 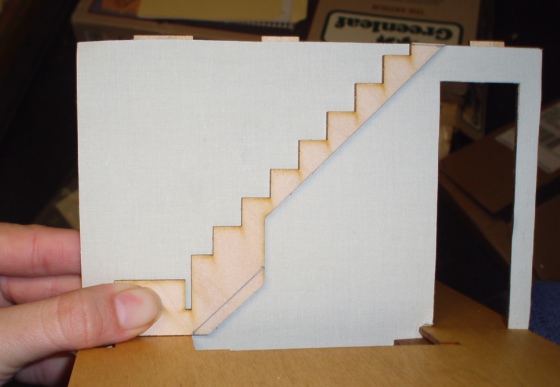 Assembling the staircase was pretty painless, considering I’d already done it once. But the next step—figuring out how to handle the railing—made my head hurt. I thought about cutting off the bottom, which would make the railing the right height, but its position would be wrong. (Remember in math class when you asked the teacher “When will I ever need to know this stuff?” It’s come back to haunt me!) 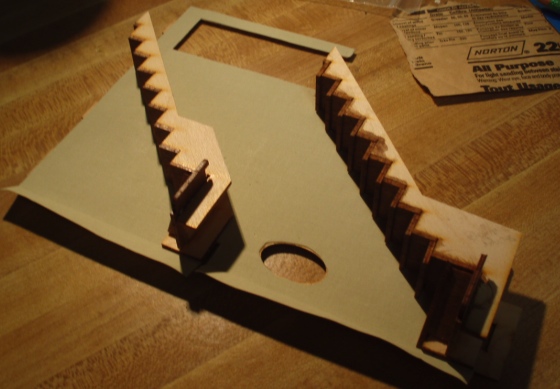 After a lot of playing around I realized that if I removed one stair’s worth of railing, just as I had removed one stair, it would fit the new staircase. I made a diagram out of paper to confirm the theory. 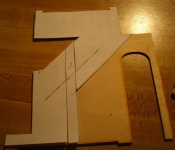 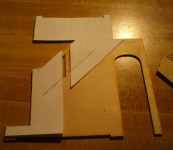 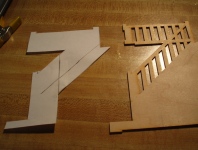 I needed to keep enough of the bottom edge to hide the stringer, so I made the cut a few rungs in. The Xs show the part to be removed. I also cut off the door area, leaving half an inch of wood below the railing to hide the stringers. (I make it sound like *I* did the cutting, but actually the man of the house did it for me, using power tools. This wood is harder to cut than the plywood in the die-cut kits!) 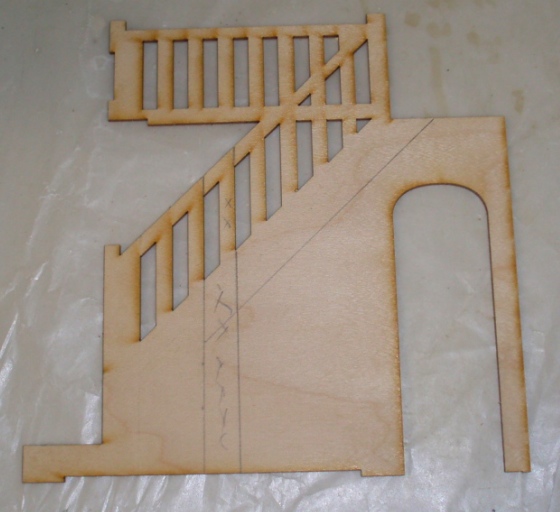 If I had it to do over, rather than making two cuts to remove a section, it might have worked better to cut down the middle of the X area and sand each side down with the disc sander. That may have resulted in straighter edges. But hey, it gets the job done! 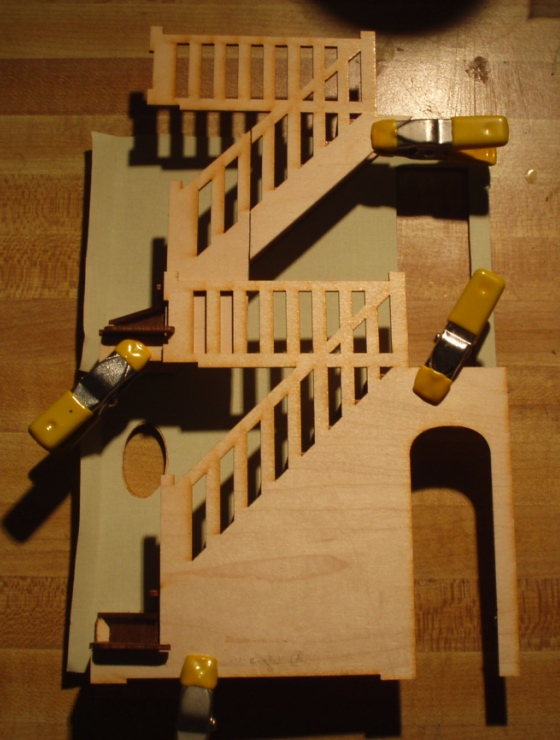 Since the underside of the new stairway will be visible, I cut a strip of wallpaper (mounted on posterboard) to cover it. 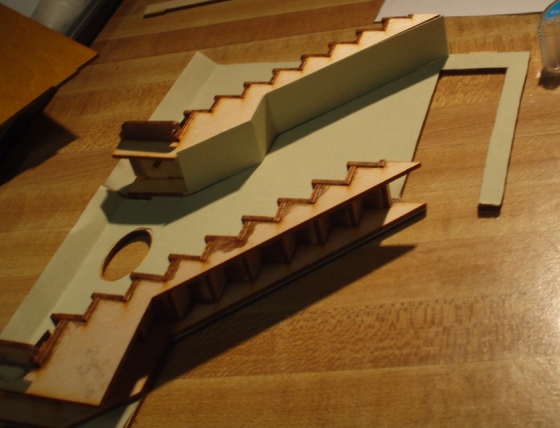 I slid the second floor into place a few times during the stair-building process, to see how it would look, but by this point I was getting ready to attach it permanently. First I carefully stained the parts of the landing that needed staining. Luckily there weren’t any glue glops to interfere. 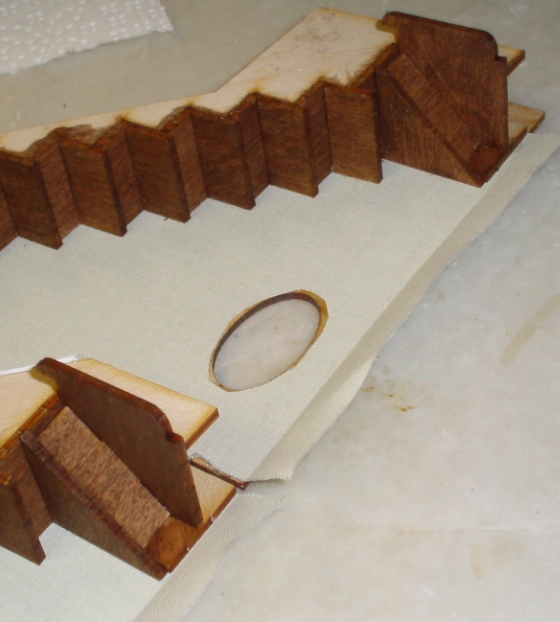 I also stained the railing pieces. There will be some trim added to these so not all of the stain was necessary, but better to be safe than sorry! 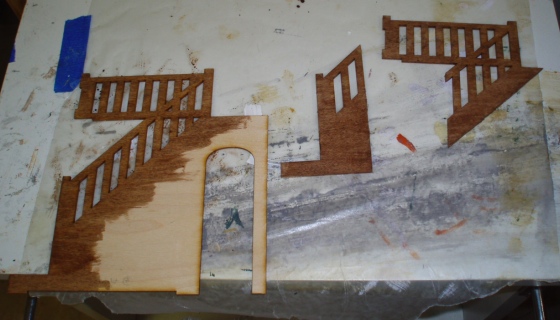 I cut off two rungs of the second story railing, since they overlap the front edge of the new staircase, then carefully removed the third rung leaving the railing above and below it in tact. Then I sanded the edges down using the disc sander to get a perfect fit (you can see the result in the next photo down). 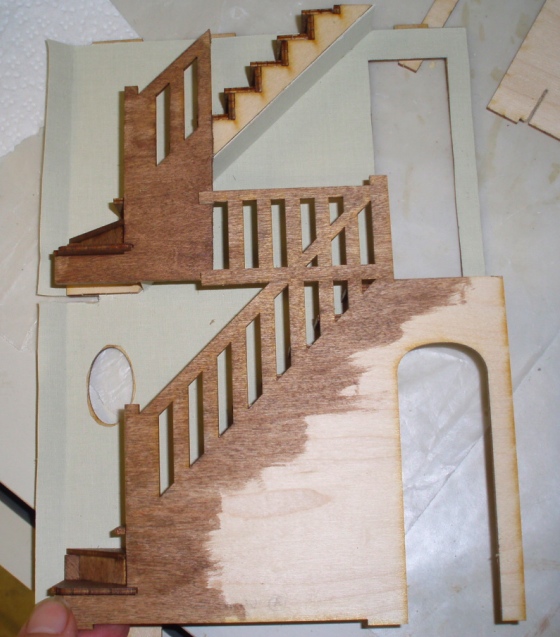 Next I slipped the wall through the hole in the floor and got all the appropriate tabs in the slots. This was a little tricky due to the two staircases and the fact that it was already wallpapered. I glued the wall to the floor on the unpapered, back side of the wall. Hopefully it’ll hold well enough.

Then I added the first story stair wall, slipping the railing up through the hole. (I’m not sure if this is the process given in the directions… I stopped paying attention to those after building the first staircase!) I glued the wall to the first story stairs and set the first floor in place to make sure everything was gluing in the right position. 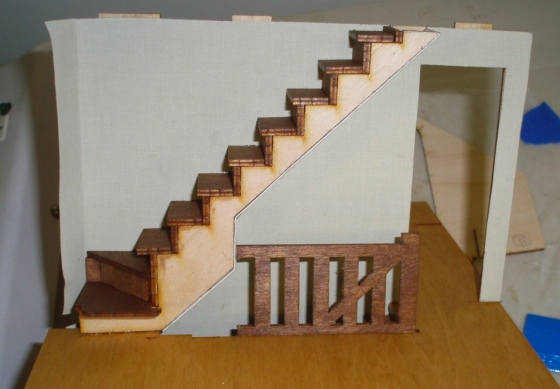 And here’s where everything got a tad frustrating. I didn’t notice until late in the game that the third riser (the one above the landing) is not flush with the stringer at the edge. As you can see in this picture, the edge of the riser protrudes a tiny bit past the stringer. So of course, when I tried to glue the bottom part of the second story landing in place, I couldn’t get it flush up against the stringer. After some fiddling, it glued in okay… not the most stable assembly, but it’ll do. 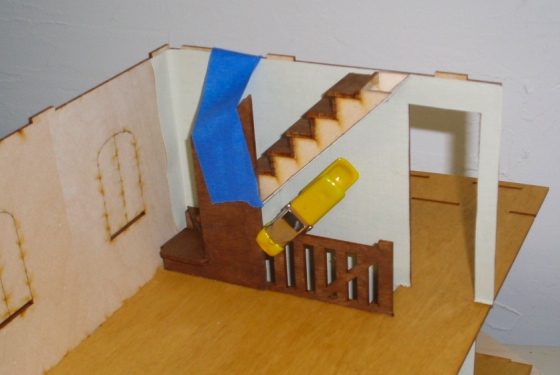 The problem is, there’s now an ugly crack on the underside of the stairs, between the edge of the strip of wallpaper (which was measured to span the width of the two stringers) and the edge of the railing piece. I’m not sure yet what I’ll do about it. Cover it with some sort of trim, I guess. It’s not the end of the world, but after all that work, it put a damper on my enthusiasm.

Even so, I’m pretty damn pleased with the end result! I still need to cut a stair hole in the third floor, so for now I’m leaving the top part of the railing off (in the shots below it’s attached with putty). The seams where the railing pieces meet are pretty obvious right now, but I’ll either fill them in or cover them up once that piece is glued in for good. And I’ll probably add wallpaper to the bottom railing piece on the second floor, along with a whole bunch of trim to pretty it all up… but all that will come later. Next up, walls! 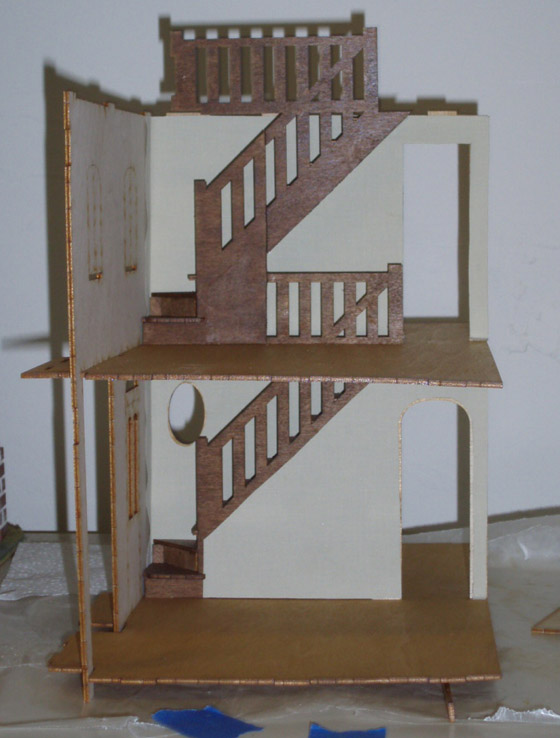 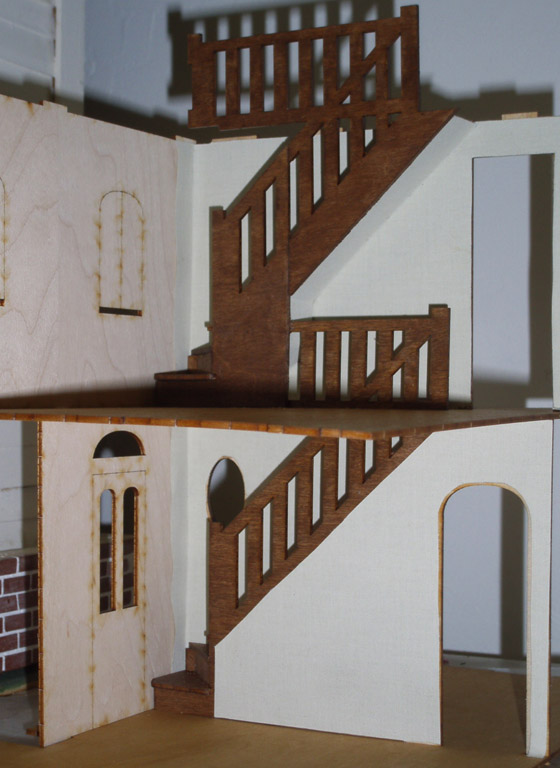