Rosedale assembly, from the ground up

My dry fit gave me a good idea of how to move forward with the Rosedale. The time has come for the permanence of glue. I started by putting together the new wing. Since there aren’t tabs and slots to connect these pieces to the main house, assembling the wing independently before attaching it to the rest of the house seemed like the best plan of attack.

I clamped it (in a sort of ridiculous way) to try to combat warping that was preventing the first floor bay from fitting together well. 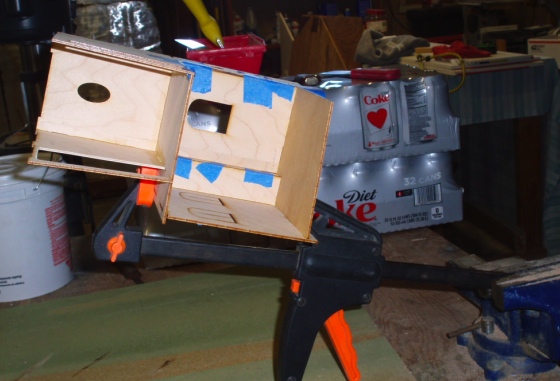 While this dried, I assembled the main part of the house. The front wall was also slightly warped and wanted to bow out. The yellow clamps are pushing it into position. 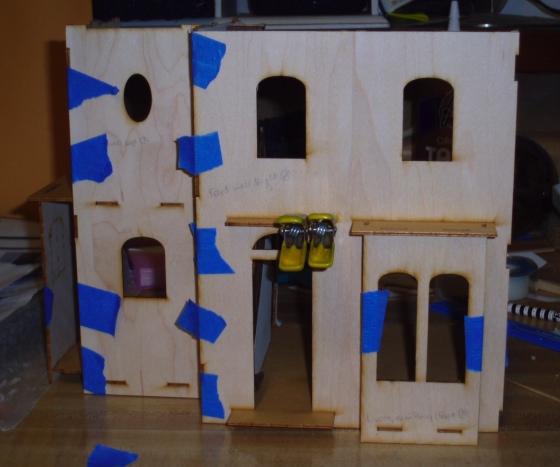 With the two halves glued, I next glued them together. Since these pieces weren’t meant to fit together I had to cut off most of the tabs, but applying lots of wood glue to each of the edges seems to have done the trick. 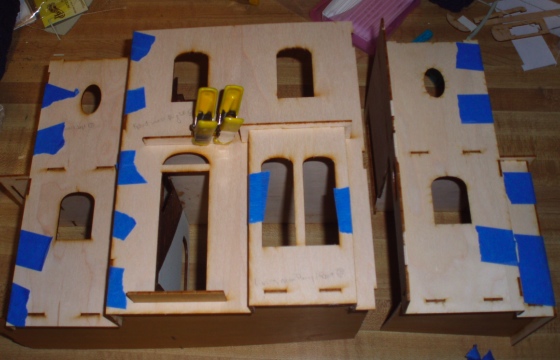 The floors are warped and didn’t meet up nicely, especially downstairs. I clamped on wood supports while the glue was drying on the rest of the structure, to ensure that they’d end up in more or less the right position. 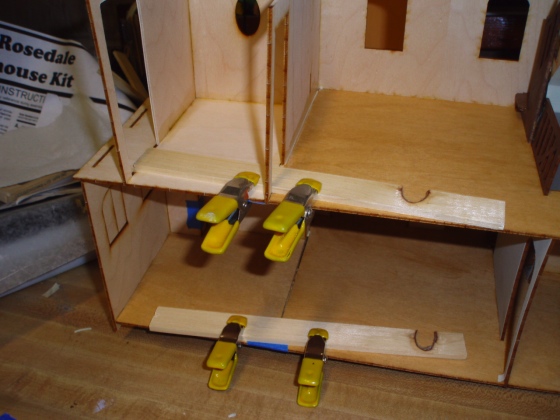 Before going any further with the assembly, I decided to wallpaper the first and second stories while it was still easy enough to get my hands in there. I cut the wallpaper to the right height, stuffed it in, and made creases where it needs to go around the corners. 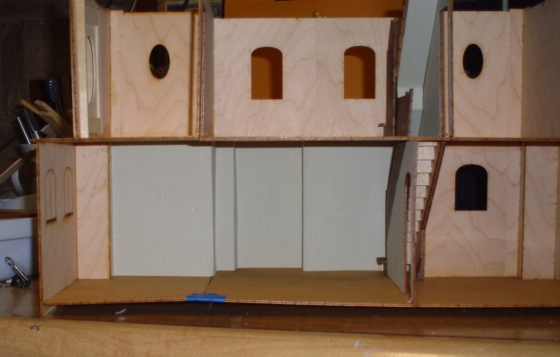 Then I flipped over the house to draw the outlines of the windows and doors, in order to cut them out. A nice perk of half scale is that the house is small and light—very easy to turn around or over or however you need to turn it! 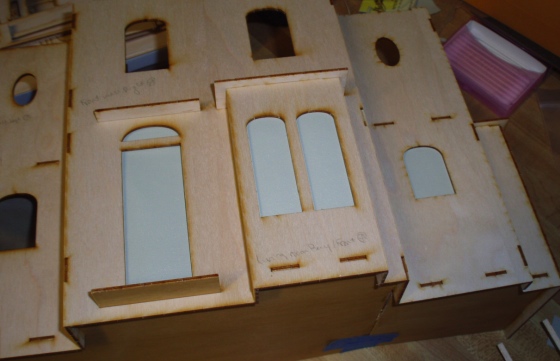 I removed the paper to cut the holes, then sprayed it with matte sealer. Once that was dry, I spread wallpaper mucilage over the back of the paper and carefully worked it into place. Some of the areas are a bit tough to reach (especially to the right of the front door, near the stairs) but I managed to glue it in without making too much of a mess.

I decided not to punch out the windows on the kitchen bay, so I can put cabinets along that wall. Before papering that wall, I needed to secure the window shutters filling the holes with wood glue to prevent them from popping out. The small gaps under the shutters had already been punched out when the kit arrived, so I filled those in with small pieces of strip wood. 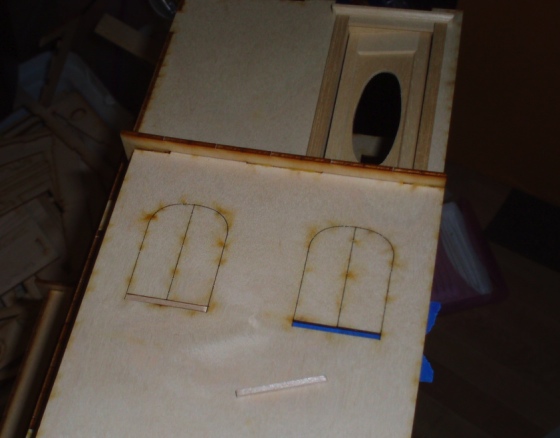 Then I smeared wood glue all over the outside and let it dry. (Below is the “before” picture; after this I used a paper towel to spread the glue. I use a lot of paper towels when I’m building a dollhouse!) A piece of masking tape inside kept the pieces from falling out as I spread the glue on them. 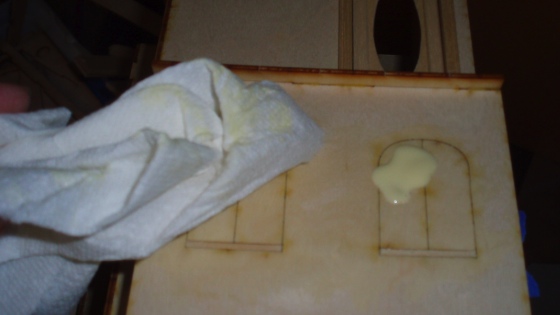 Here’s the wallpaper so far. I didn’t do the laundry room yet (first floor on the right) since I’m planning to fill in that diagonal wall where the stairs are to create a closet. I have enough of the off-white paper left over for when the time comes. 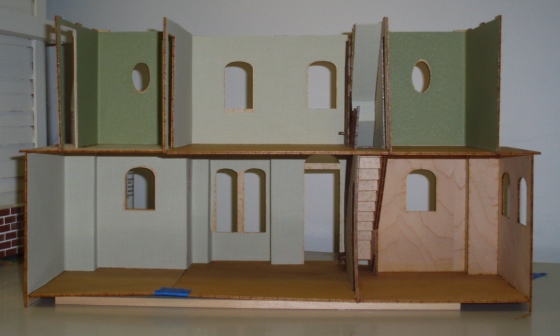 Now it was time to deal with the warp in the first floor. This seam is easier to secure than on the second floor since the underside doesn’t show. I got a piece of strip wood that’s the same height as the gap under the floor and cut it into two pieces. 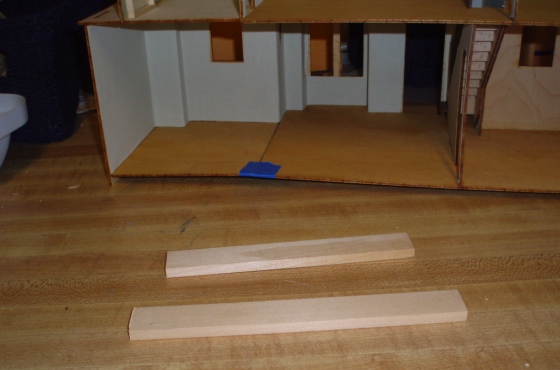 Flipping the house over, I glued these underneath the warped part. The masking tape is there to keep them from falling off when I set the house right side up again. 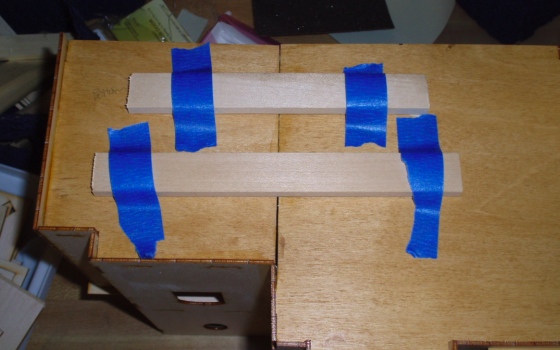 The floor still wanted to bow up, so I used clamps to force it down. You can see a paint can through the front door—that’s sitting on the landing, serving as a weight to keep the whole house from falling forward due to the pressure of the clamps! 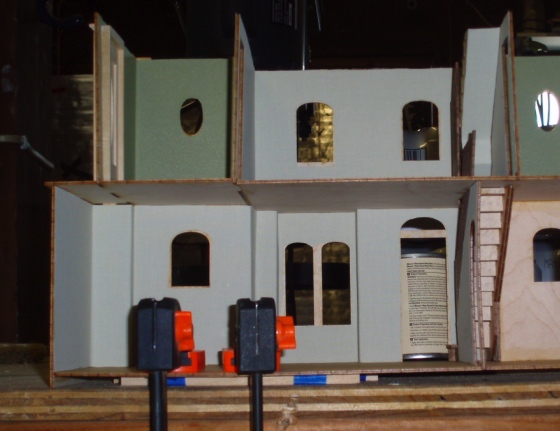 And here’s what we have so far. (Looks just like the dry fit, but without all that tape!) More progress coming soon… 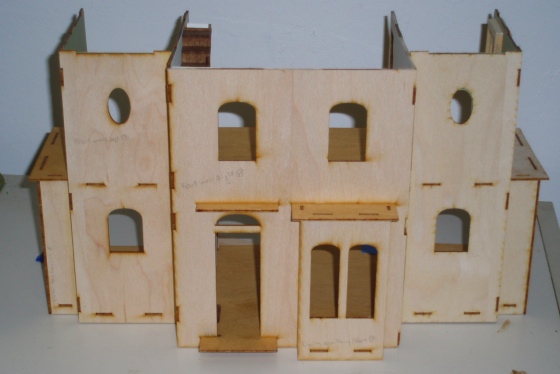