Police Quest behind the scenes in GamesTM 115

Continuing my grand tradition of pimping Sierra games in GamesTM, this month I’ve written a behind the scenes article about Jim Walls’ Police Quest. The issue number is 115, and it should be on newsstands in the UK right now (probably also some US stores, but with Borders out of business I can’t confirm this). Jim gave a great interview and I learned many interesting tidbits I never knew about Police Quest… most notably that many of the events in the games are based on real-life events that happened to him during his days on the California Highway Patrol. I guess I should have realized that, it just never occurred to me.

I played the first two Police Quest games in 1989ish and loved them both. The first I actually solved all on my own without a hint book, which was no small feat at age eleven. (I also got pretty good at poker!) It’s funny how perceptions change… I distinctly remember my mother objecting to me playing Leisure Suit Larry at around the same time (and who could blame her?) but apprehending criminals and/or being shot by them after failing to follow proper procedure was no biggie. Also, dressing up as a pimp to go undercover was okay. (I didn’t know what a pimp was, mind you. In fact, I didn’t realize until working on this article is that Sonny’s undercover persona, “Whitey,” was supposed to be Marie’s pimp. Again, just never occurred to me.)

Of the two games, I preferred Police Quest 2, and I think it’s because of the way Sonny’s relationship with his girlfriend Marie tied into the story. It’s the first adventure game I played that wasn’t just about using items and mastering the parser and avoiding meaningless deaths, but also about experiencing the emotions of *being* the character. (Leisure Suit Larry not withstanding.) I replayed Sonny and Marie’s dinner date a zillion times, trying to figure out every possible interaction. Good times. 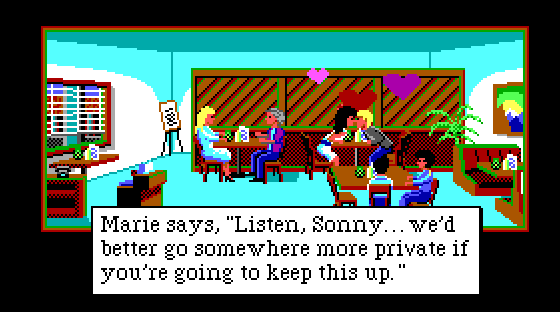 Speaking of meaningful video game relationships, last week Adventure Gamers posted an article I wrote about Catherine. That human element I loved in Police Quest 2 is still alive and kicking (possibly also biting) and though it’s not a traditional adventure game by any means, Catherine has more going on in terms of character exploration and crazy imagery (in the literary sense) than any other recent game that I can think of. It’s a close second to Heavy Rain as the best adventure(like) game I’ve played this year.

Bobbing for Bones: The Sequel