Almost two years ago, I bought a HUGE 1:12 house off Craigslist for $150. It’s been sitting untouched ever since. I wanted to start a new project with the new year, and even though I have some other half scale kits in the wings, I had the urge to dust off this baby instead. The house is already built, sided, and shingled, and once I slap some paint on it, it’ll be more or less finished. Right? (Ahh, the optimism January brings…)

The first step was pulling it out of my relatively small workshop, where it’s been sitting on a wheeled dolly leftover from Geoff’s airplane building days, and into the garage where I would actually have some space to work on it. I’m not sure how long Geoff will tolerate it staying in the garage so I have to move quickly! 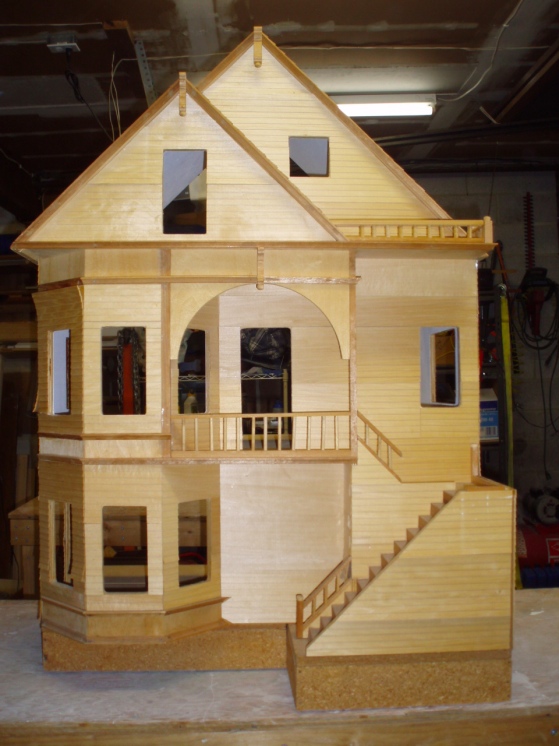 A lot of the siding is coming up at the edges, so fixing that is one of the first orders of business.

I played around with furniture when I first got this house, and got the idea to add a garage to one side and a deck to the other. I have had a garage kit sitting around for at least ten years… it’s not the Houseworks one that Miniatures.com sells now, but an older one that I think was made by Timberbrook. My idea was to give it a flat top and use this as a patio. 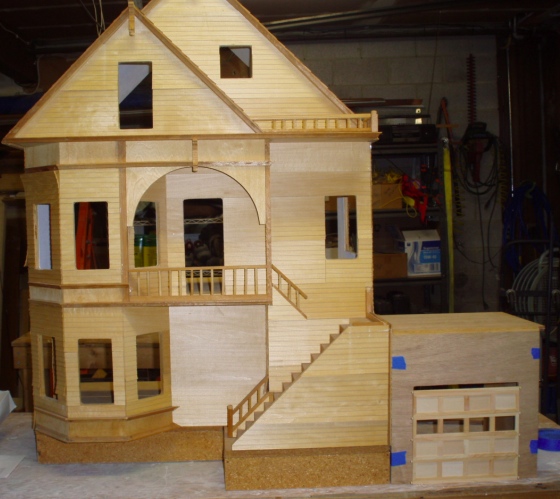 Seeing it now, I’m not sure I like how it juts out on the side. The house is already huge and clunky and adding that might be too much. Still want to do the deck on the other side, though (particularly since I already bought a deck kit and hot tub…)

To add the garage, I would need to remove some siding from the side of the house (the part of the wall that would form the interior garage wall). Even though I’m undecided on the garage, I decided to pull up the siding anyway because there’s a little room behind it, that the previous owner boarded up when she sided the house, and I wanted to take a look. 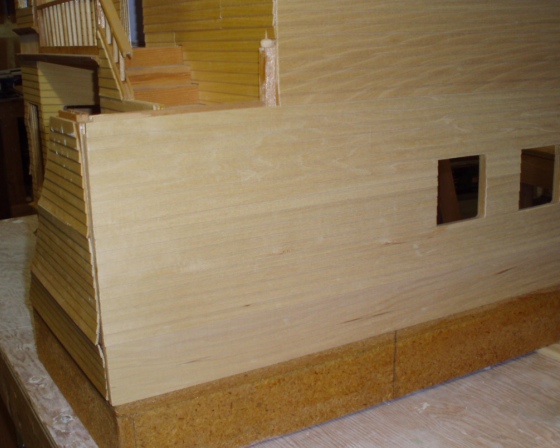 I’m not sure what kind of glue she used, but luckily it hadn’t stuck very well. I was able to get the siding in this area relatively painlessly off by wedging a flat chisel-type tool underneath it. (Well, it was painless for me. The siding would probably beg to differ.) An old catalog entry for the Hillside Victorian referred to it as having a wine cellar—guess this is it! 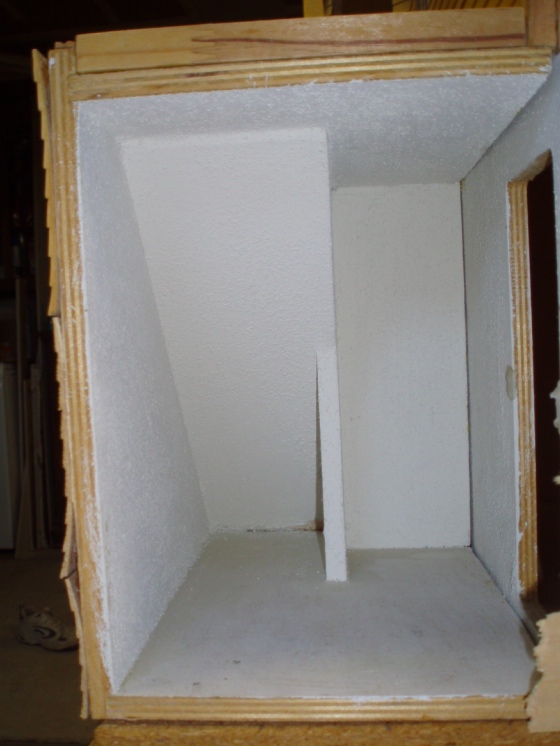 Here’s how the little room relates to the garage. (The door hanging in space would have stairs leading down to the garage floor.) My original thought was to make this little room a bathroom, since none of the other rooms are really a good shape or size. But now that I’ve opened it up again, I want the room to be visible and accessible. I thought about hinging the wall piece so you can open it and look in, but that would make it tough to finish the garage wall, and with the garage in place it would also be awkward to open the wall and see in. Plexiglass is another option, but it seems odd to have Plexiglass looking in on your bathroom… (Note to self: this isn’t real life!) 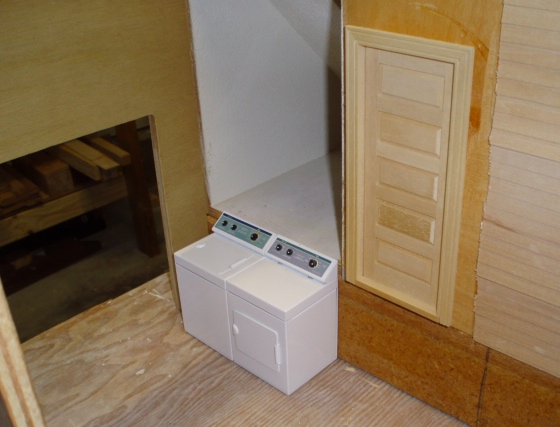 Or, I could make the little room a laundry room and leave the opening open, with stairs leading into the garage. In this scenario I wouldn’t need to add a door leading into the garage, saving myself the trouble of cutting a hole, and it would be much easier to see and get my hands in to access the room, even with the garage in place. And I especially like that you get a peek of the washer and dryer from inside the house.

So my current thinking is to go with the laundry room, and if I don’t end up adding the garage, I’ll cover the opening with removable Plexiglass rather than closing it off with an exterior wall. Since I’m undecided about the garage, I won’t bother fixing up or painting the siding on this side of the house until I’ve made up my mind!

With the mystery of the hidden room solved, I moved onto the siding, which needed some TLC. Many pieces were loose and curled at the edges. 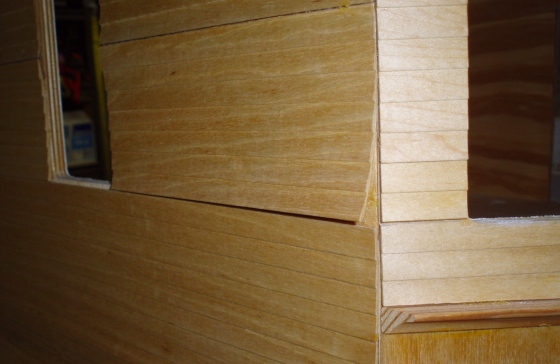 I went nuts with the wood glue and used tape and all varieties of clamps to hold the curled siding in place. 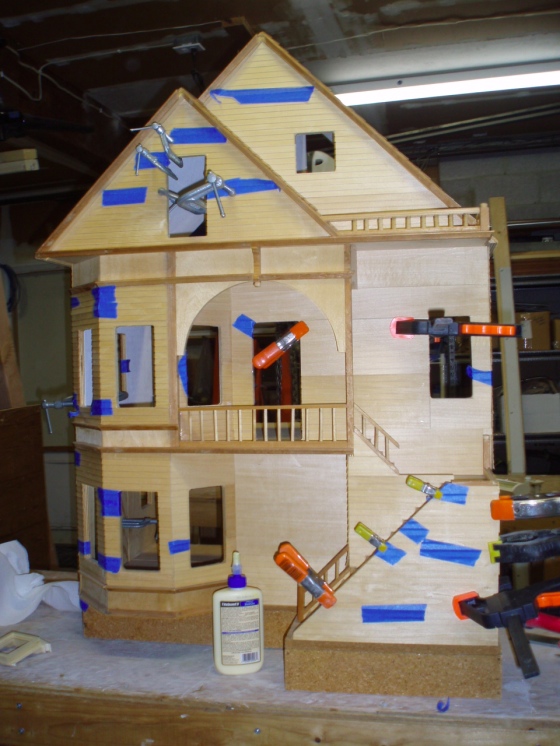 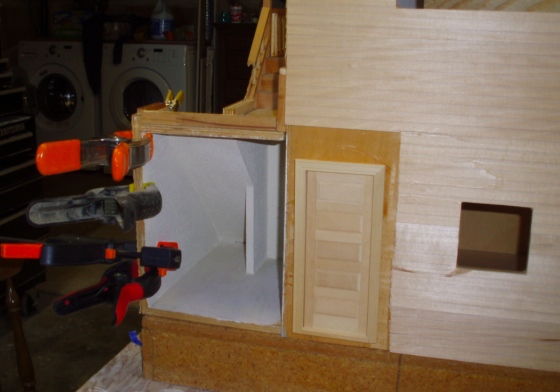 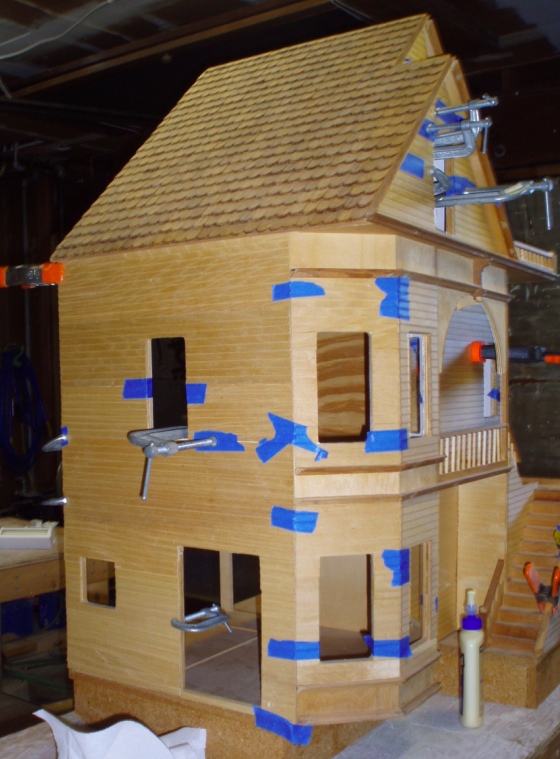 While that dried, I got a head start on the windows. This house came with working Houseworks windows and the panes can’t be removed, so I’m not sure the best way to tackle painting them. I started with one small non-working window (the acrylic easily slides out) and one window that’s broken at the sill, so I was able to slide out the panes first. It’ll be easy to fix, and I would gladly “break” the rest of them to help with painting, but I’m not sure I can do it without destroying them.

I’m so used to working in half scale that painting these windows was sort of surreal, I felt like a giant! But I’m sure I’ll appreciate that when it’s time to do the detail work… 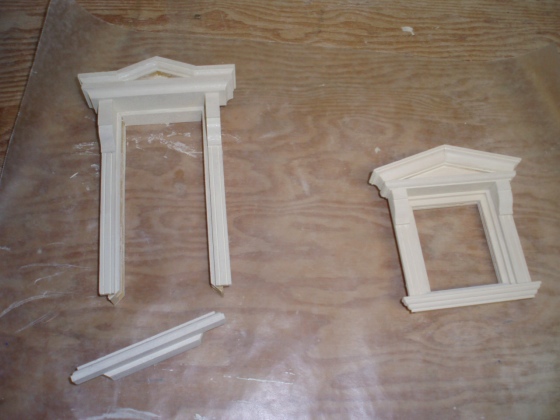 The color scheme for this house is going to be light blue, with white trim and a dark blue accent color. The windows will probably need a second coat of white, and then I’ll do the blue the same way I did the tan accents on my Fairfield. 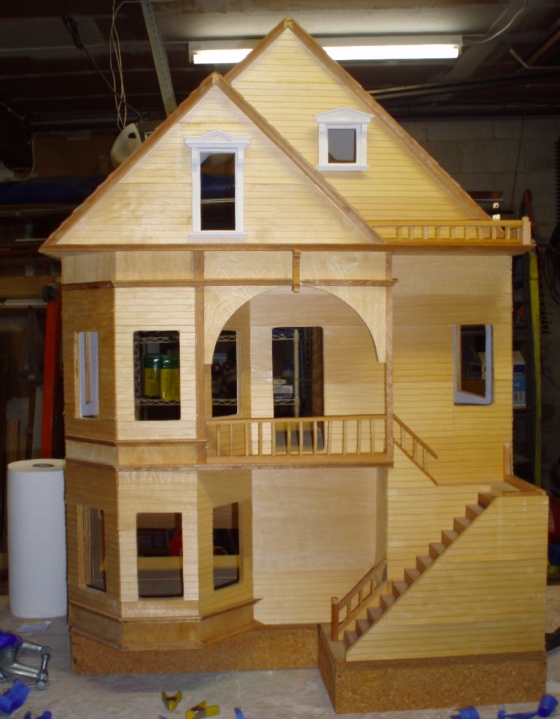