Not only is this house much larger than I’m used to, it’s also much heavier. I’m used to light little half scale houses that I could toss in the air if I wanted to. After a second day of fighting with the siding on this behemoth, my hands and arms are covered with scratches and my muscles are actually sore. Score one for the dollhouse.

Having decided I’m definitely not going to add the garage, the first thing I did today was remove the siding at the bottom of that side of the house so I could replace it. When liberating the little room, if I had approached it differently and scored the siding right at the edge of the room, this wouldn’t have been necessary. But thinking I’d be adding the garage and this would become an interior wall, I removed a few inches too much. Joining up two pieces of siding looks bad so I decided to take it all off and redo it.

These pieces were glued better than the ones I took off yesterday and I ended up pulling off some of the outer layer of plywood along with them. 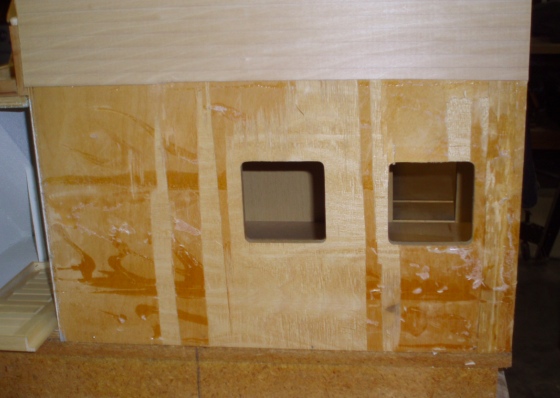 Next I cut and glued on new pieces. Luckily I had just enough siding left over from the Westville to cover this area. Unluckily, it’s much harder to glue siding onto a house that can’t be turned onto its side (damn you, gravity!) After a bit of comedy I managed to get the pieces held in place. I also fixed a couple of loose spots higher up on the wall. 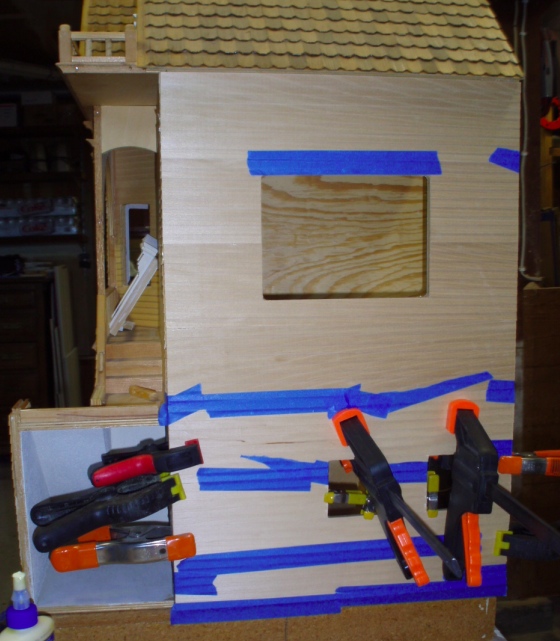 With that out of the way, I walked around the house looking for cracked siding and used watered down wood filler to clean up the cracks. Some of these were there when I started and some I caused yesterday trying to fix the siding that was loose. I’m hoping this will make them less visible (or, better yet, invisible!) once the paint is on. 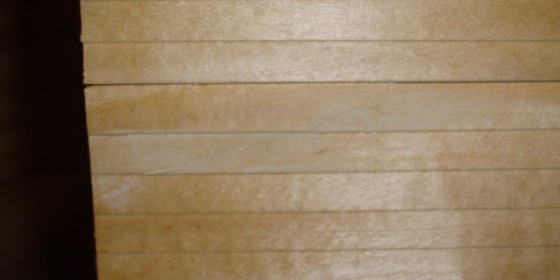 Before starting any painting, I vacuumed the house with Geoff’s shop vac. This was the squirmiest part of the day, because I’d noticed a pile of little brown somethings through the attic window, tucked into a little alcove that’s impossible to see into from the open part of the house. My dollhouse workshop is attached to the garage and we’ve had a mouse or two in there over the years… they’ve never caused damage, thankfully, but when I saw that pile of little brown somethings through the window I was convinced it was a mountain of mouse poop. (Which, admittedly, would be weird… what mouse poops in a designated area, enough times for it to pile up?) Totally grossed out by the idea of it, I chose not to memorialize this with a photo.

I was hoping I could just stick the shop vac through the window, using one of the attachments, to suck up whatever it was and never have to touch it. But of course the angle was too awkward. I ended up putting on a glove, reaching through the window, and flicking the little brown somethings out of the alcove and into the attic room where the vacuum would reach them (going “ew, ew, ew!” the whole time). And what do you know, it wasn’t a mountain of mouse poop, but a stash of little black seeds that the mouse had presumably stored there for the winter. (Aw, how cute. Not.) Into the shop vac they went.

With that unpleasant / ridiculous task out of the way, I started painting trim. I thought it would be a quick task and I could then move onto the house itself. Instead, it took the rest of the afternoon. (Well, not the entire afternoon, but I had exceeded my patience limit by that point.) I am really not used to working on such a big house! For the higher-up stuff I had to stand on a chair and twist into all sorts of precarious positions. Who needs yoga?! 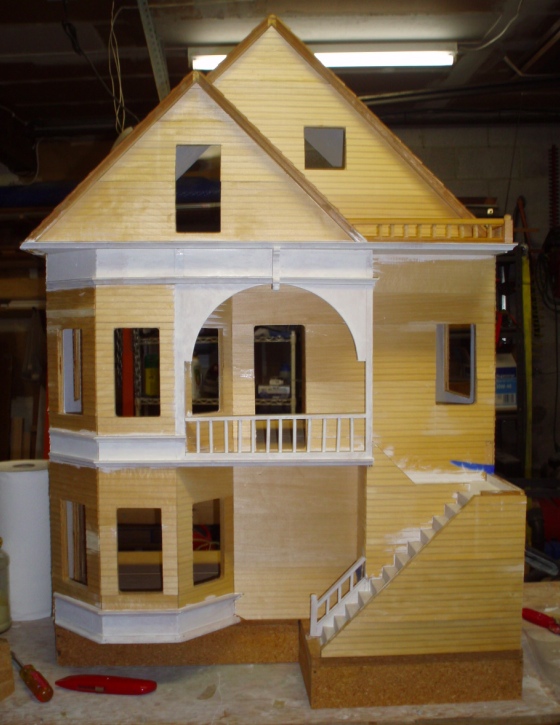 I mostly used a foam brush, patting the wet paint with the edge of it to get rid of brush strokes (a technique I learned in the classes I took from The Guys from Texas). I didn’t bother masking the walls, thinking it’ll be easy enough to paint over any stray white paint with the blue I’m using for the house. (When I paint the house I will mask off the trim, though!)

The railing spindles were tough to paint, particularly the backs, as were the back sides of this curved panel and the porch roof behind it. I did the best I could to get the visible areas and might have to call it good enough. I’m definitely not looking forward to painting the siding in here—it’s a tight space and is very hard to get a brush in there. (With neat results, anyway.) 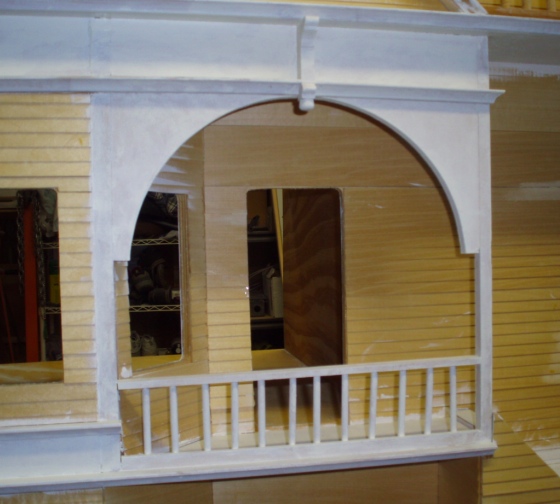 I think I have all of the railing pieces that go with this staircase, but they weren’t all attached when I got the house. I’m going to wait to deal with them until later. Also I’m planning to do a second coat of white paint since the coverage isn’t so great. (Oh goodie, more hours of paint yoga in my future!) 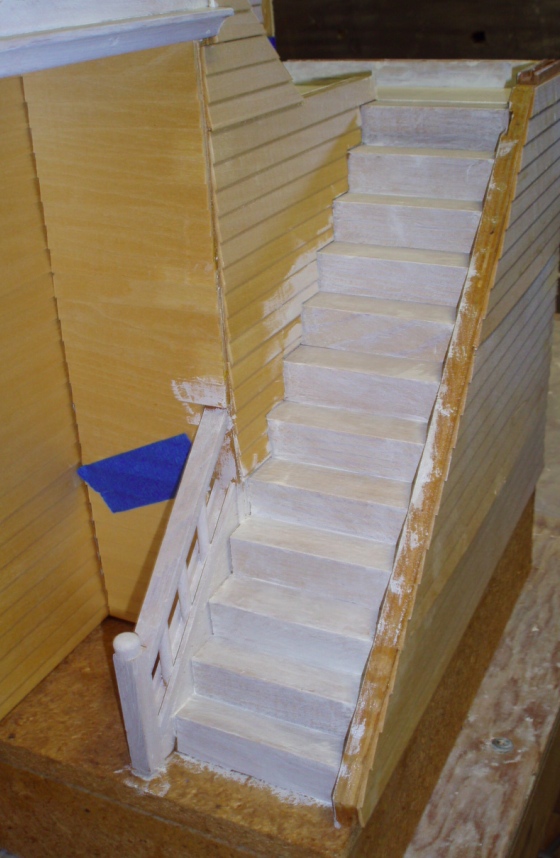 An interesting thing about this house—which according to old mini catalogs sold for $450 in 1979—is that the trim we take for granted now was all handmade. The newel posts are blocks of wood with globes glued on top, the spindles are simple dowels, and these crown molding-like pieces remind me of something you’d buy at Home Depot for a real house. Notice they don’t quite meet up at the corners. I’m telling myself that’s part of the charm. 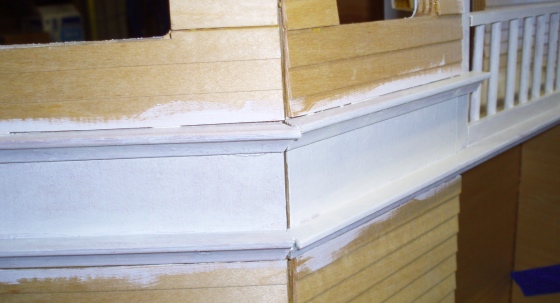 In the end some of what I painted white today will be the dark blue accent color (the crown molding-like pieces, parts of the finials, maybe the railings). Knowing I’d probably need two coats of white, I figured I’d start by painting all the trim white, then mask it off and paint the house, then touch up the trim and add the blue once I can see how it looks with the light blue siding. I may have made extra work for myself though.