As I’ve mentioned numerous times I’m not a fan of detail work, but the Hillside Victorian is just screaming out for Victorian details, and who am I to refuse?

Most of the windows on this house are Houseworks Victorian windows, and I’m painting accent colors similar to how I did the Fairfield’s windows. At 1:12, these are somewhat easier to paint neatly than the half scale windows were, but they still take a while… two coats of white, then two coats of the blue with a small chisel brush, then another round (or two) of white touch-ups to fix where the blue got outside the lines. I’ve only done these two so far. 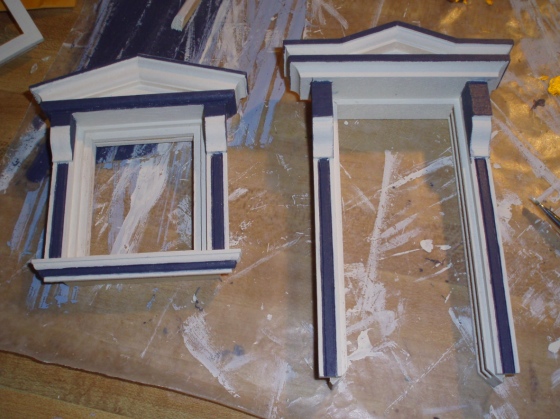 And here they are on the house. (Here’s a close-up shot.) Two down, eight to go! 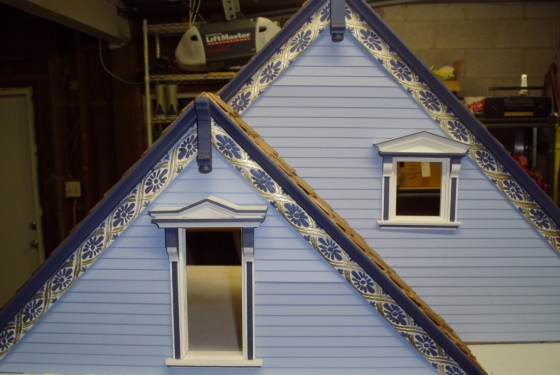 Because most of the Hillside Victorian’s windows have the Victorian pediment, I wanted the front door to match. Houseworks sells a Victorian style door (I have it on the Fairfield), but the house came with a nice old door with an etched glass window (upside-down in this picture!) that I wanted to use. Also, if I’d bought the Victorian door, the hole would have needed to be enlarged, and that would have been too tricky to reach with the porch and railing already glued in.

Houseworks doesn’t sell a standalone pediment of this style (which is weird, because they do offer several other styles) but I stumbled across exactly what I wanted on eBay. I wasn’t able to find it anywhere else, so it might not be in production anymore.

I used the disc sander to sand down the top part of the door’s trim, making a flat place for the pediment to sit. 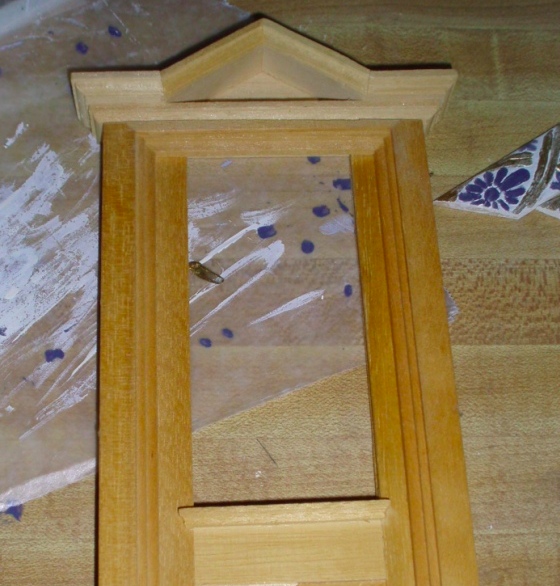 Next, I painted all the door pieces with the white trim color. The glass window and the door itself are both removable, making for easier painting. 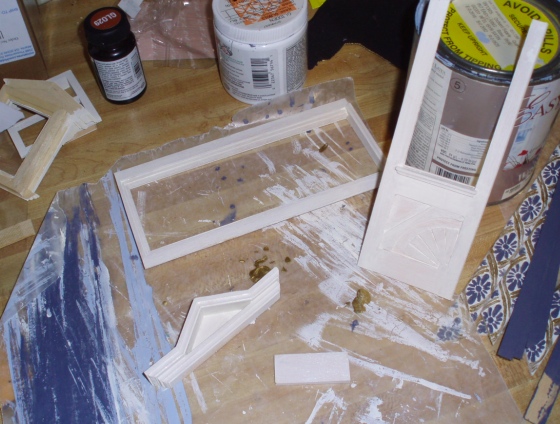 Though the pediment matched nicely, to really look like the windows, the door needed to have those trim pieces at the top “holding up” the pediment. (Is there a name for those? I want to call them shoulders…) When I bought the Hillside Victorian, it came with a plastic baggie of trim odds and ends that may not have originally come with the house (some had paper stuck to them, as if they’d been used for something else and then pulled off). Pawing through it, I found two that would work.

I painted the pediment and shoulder thingies with the same blue accents as the windows, and added some color to the raised parts of the door. (Sorry for the poor quality of this picture, it had a light shining on it and the flash must have gotten confused…) 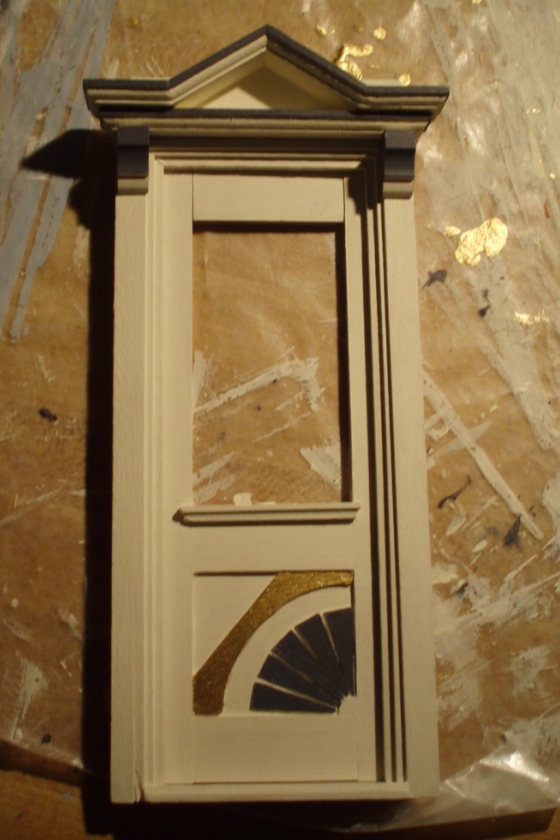 I went back and forth about whether to use blue or gold for the “rays”… gold might have made more sense since it’s sun-like, but the flowers on the gable trim are painted blue and the swirly things around them are gold, and I thought I should repeat that here. So I did blue for the sun’s rays (or maybe it’s a flower, too?) and gold for the band above it. I’m not sure it was the right choice, but I’m not going to change it now.

What this door is still missing, that the windows have, is the blue stripe down the middle of the side trim pieces. I’m thinking of buying some narrow (and very flat) basswood that I can paint blue and glue on, to mimic that look. I’ll hit up the dollhouse store tomorrow.

I’m also working on trim on the front of the house, but it’s not too exciting-looking at the moment so I’ll save those pictures for later…

My dog, the superstar