During GDC, I had the awesome opportunity to spend an hour with Tim Schafer, shooting the shit about his insane Kickstarter experience, his plans for the Double Fine Adventure, and what he thinks about the state of adventure games in general. It was an incredible conversation. (For me, anyway… he missed out on eating lunch so he might have felt otherwise!) 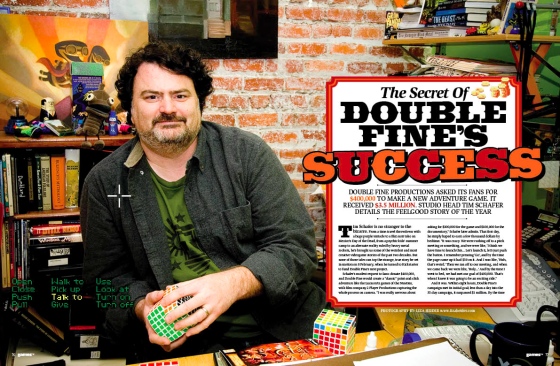 Through the magic of creative writing, that interview has transformed itself into a hefty feature article in Games™ issue 122, which went on sale today in the UK. This magazine can also be found at some newsstands and bookstores in the US (at least, Borders used to carry it, before they went kaput), or you can buy it online.

In the relatively short amount of time that’s passed since I wrote this article, I’ve been fairly involved with another Kickstarter project, so I’m even more aware now than I was when I talked to Tim of how much of an anomaly the Double Fine Adventure campaign was. The outpouring of donations—the outpouring of mainstream support for an adventure game—to be honest, with adventures being the niche that they are nowadays, I still can’t really believe it happened.

I don’t think that Double Fine’s experience has fundamentally changed the state of the adventure genre… and although certain crowd-funding doors have been opened for other “old” adventure game designers who want back in on the action (starting with Al Lowe, Jane Jensen, the Two Guys from Andromeda, and, soon, the guys behind Tex Murphy), comparisons to the ridiculously successful Double Fine campaign can actually make the (equally awesome) results of these campaigns seem less impressive. Still, anyone who cares about adventure games can’t deny that Tim Schafer made something amazing happen. A year ago, if you’d told me that all of these adventure legends would be staging comebacks, all at the same time, I would have laughed in your face (probably somewhat obnoxiously). But this is now the reality we live in, and Double Fine’s leap of faith has a lot to do with it. 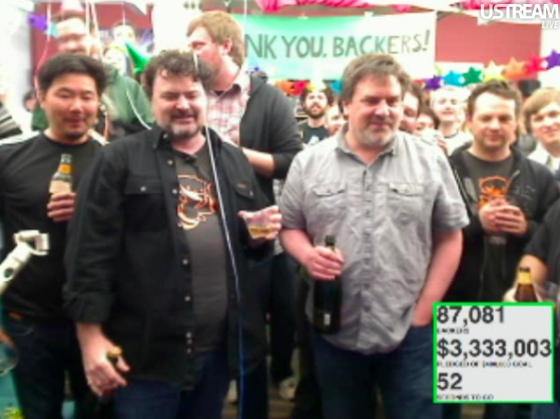 I hope that the article captures some of the excitement of those five weeks when more than 87,000 people, unashamed, threw an obscene amount of money at Tim Schafer so he’d bring back something they’d lost long ago. And for those like me who never believed the “adventure games are dead” rumor in the first place, I think you’ll find his opinions about said rumor pretty encouraging. It all makes me very excited for the future.