With the first floor interior of my Little House cabin finished, I moved onto the exterior. The Sugar and Spice kit came with a bundle of “half timber” logs that sit flush against the side of the house. They have to be cut to size.

Initially I made the mistake of cutting almost all of the short lengths to the right of the door from the same log—a particularly brown log. So color-wise, it looks a bit funky. I’m hoping that adding the gray stain will make this less noticeable. 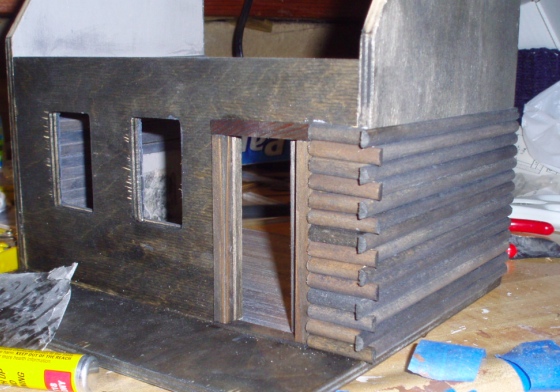 Since the logs are only half round, they don’t exactly look authentic where they meet up. But it’s close enough and the benefit of gluing something flat to the side of the house, as opposed to something round, more than makes up for this! 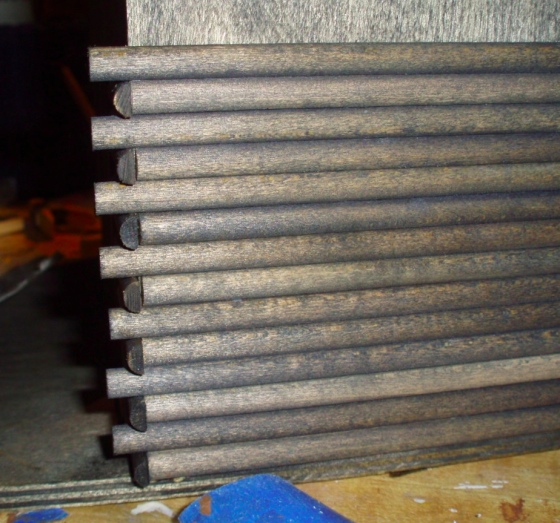 Before starting on the left wall, the chimney needed to be glued in place. It’s heavy, so I used wood glue and clamped it overnight so it’ll hold. (Hopefully!) 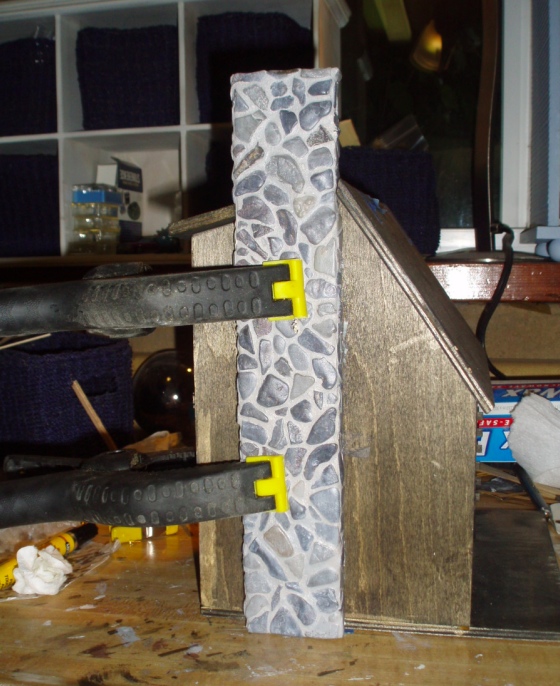 Then I kept working my way up the wall. The windows fit inside the window frames and I don’t plan to add any exterior trim, so I did my best to get straight edges around the windows. 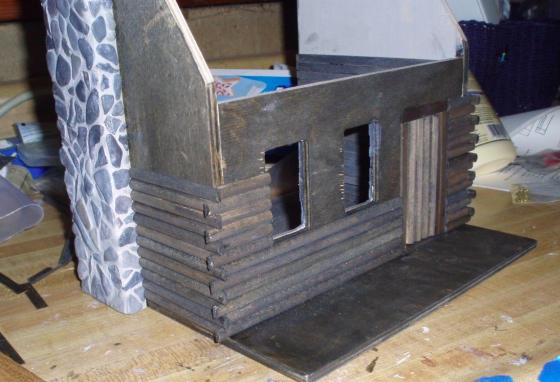 I did all the “slivers” to the sides of the door and windows, then added the long log across the top and clamped it in while it glued to make sure it was straight. It sits slightly above the tops of the windows. I’m not sure if I’ll do anything about that (again, I want to see how it looks once I’ve weathered the logs with gray stain).

And here it is with logs all the way up to the top of the first story. The visible plywood edge of the floor will be hidden by the porch roof. 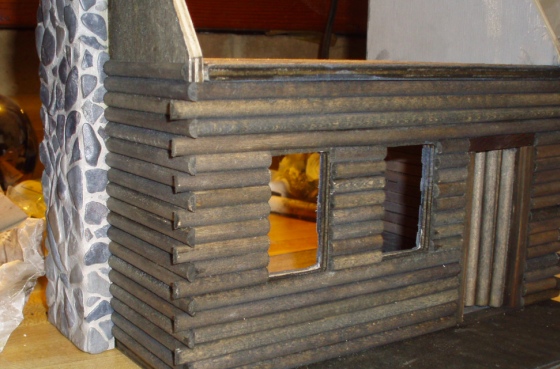 The Pepin replica house has vertical boards for the top half of the house, rather than logs. I decided to replicate this with skinny sticks. 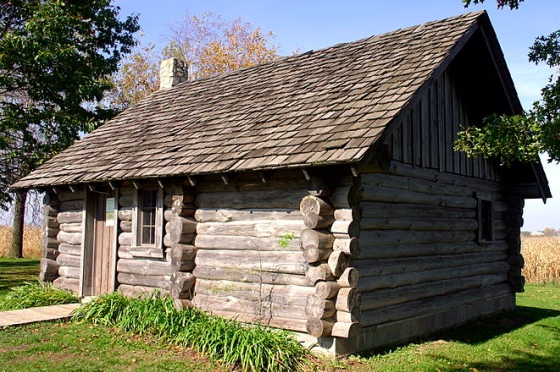 I cut the angles by drawing along the roofline with a pencil, then cutting the skinny sticks with a craft knife. They’re a bit tougher to cut than basswood, but it worked out okay. 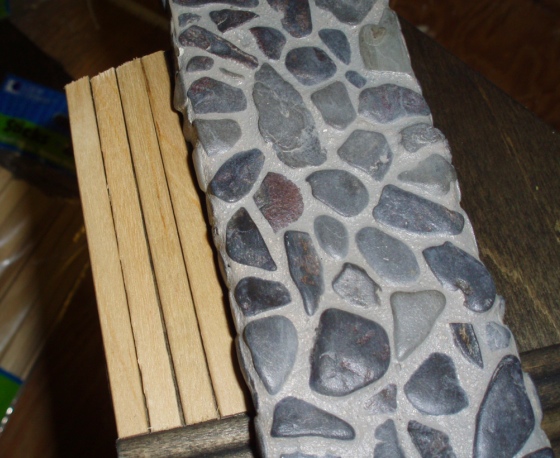 Stained ’em and glued ’em in place. A few were warped and needed encouragement to sit flat. 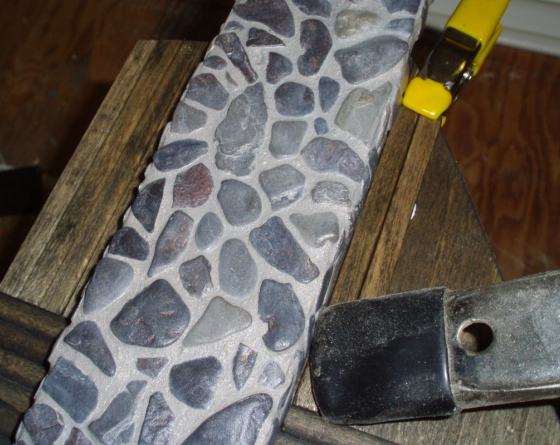 And here’s the end result (the roof isn’t glued on permanently yet). The skinny sticks are a bit browner than the logs but again, I expect the gray stain to even everything out. 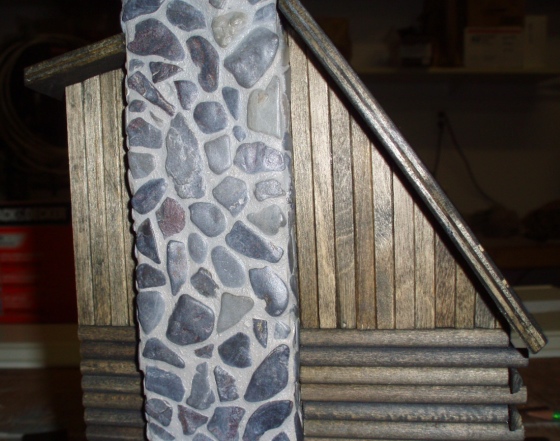 Initially I thought I’d leave the porch off to be consistent with the Pepin replica house and book illustrations, but decided that that this kit would look better with it. To give myself a break from cutting skinny sticks (it’s hard on the hands!), I finished off the porch floor. I started by adding logs around the base, mitering the corners for a nice fit. Only messed up one cut trying to figure out the angles—that might be a new record for me!

Next I added floorboards like inside the house. I had *just* enough of these left.

For the board closest to the house, I had to cut out a small notch to fit it around the base of the door. I cut it a bit too much on the right, but since the wood underneath it is stained, it’s hardly noticeable.

Finally I glued in the ceiling piece, again using wood glue and clamps for a stable bond. Next time I work on this, I’ll do vertical skinny sticks on the other exterior wall, and then on the inside walls. 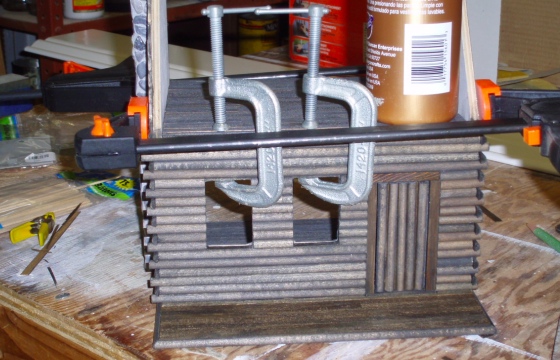