In my last blog, I pointed out that the half-round logs that came with the log cabin kit make the corners look kind of silly. My dad suggested cutting pieces to glue to the flat edges, to make a “full” log. It was a bit tricky dealing with such little pieces, but I managed and it looks 100% better. 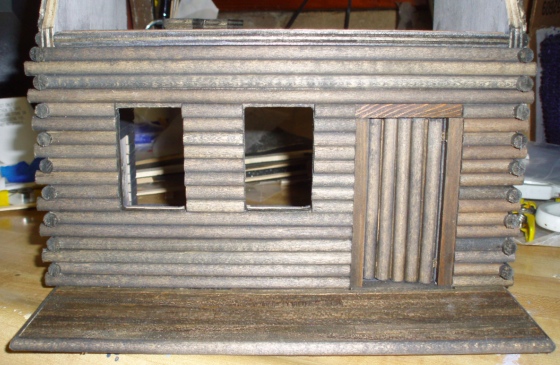 Extreme close-up. There’s an obvious “split” where the two pieces of log meet, but whatever. I think the appearance of full logs outweighs that little flaw. 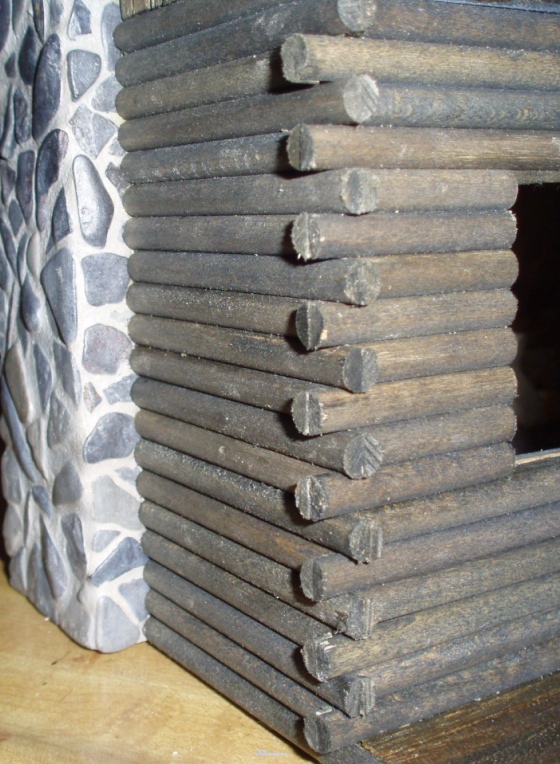 With the exterior finished, my next task was to add skinny sticks to the interior of the second floor. I started with the roof. I used a silver pen to draw a line down the center. 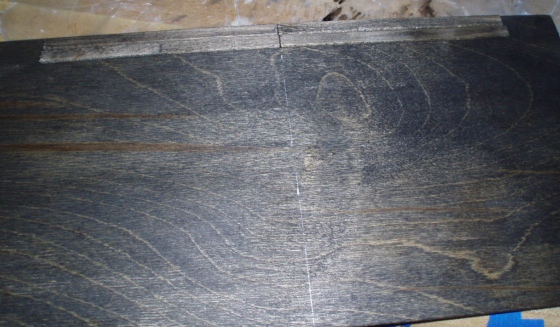 Then I glued the skinny sticks on like I did for the first floor ceiling. 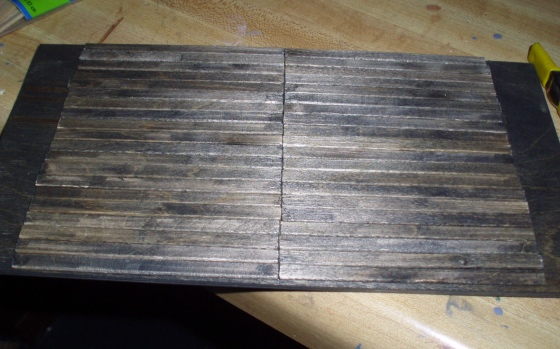 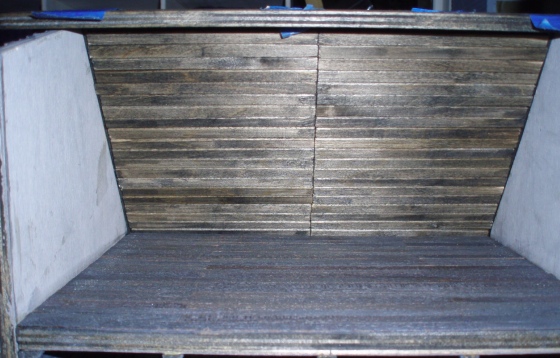 Added skinny sticks to the inside as I had downstairs. I realized too late that by doing the ceiling first, I made the ceiling timbers end flush with the walls, which didn’t leave enough space for the timbers on the wall. Luckily it was easy enough to chop off the ends of the skinny sticks on the ceiling (I didn’t take a picture of it, so take my word for it!) 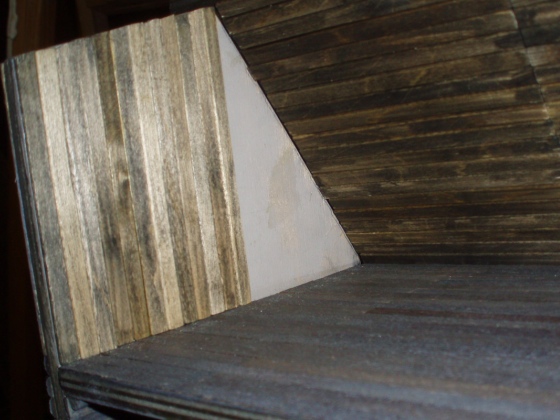 The jaggedy edges from where I cut off the ends of the skinny sticks got covered up with a log. 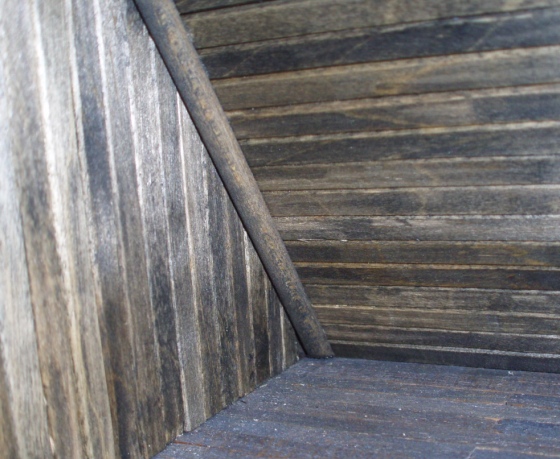 I used the miter box to cut the ends of the logs at a 45-degree angle, so they’d meet the floor more or less flush.

I added the gray stain to the walls and ceiling. 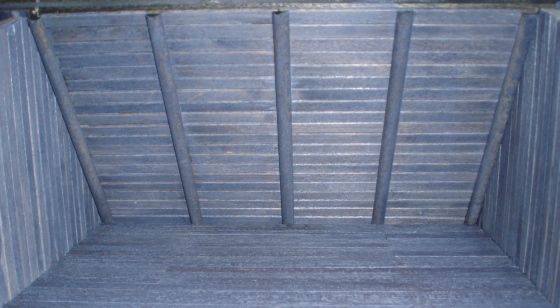 At this point I decided to glue in the roof. 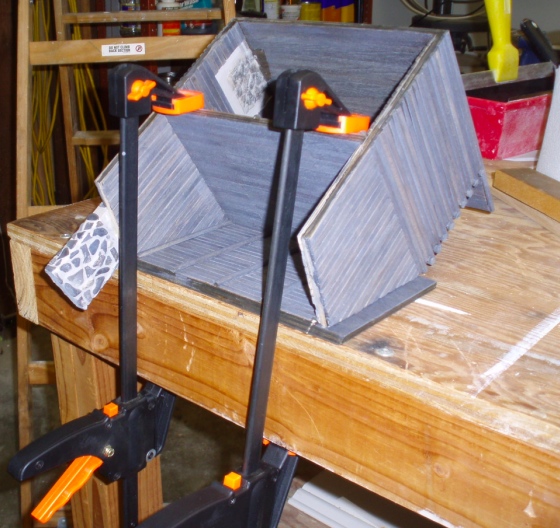 I glued logs under the eaves to cover up the uneven edges of the skinny sticks. There’s still a little bit of a gap right at the peak (oops), but it’s not too noticeable. It’s rustic, right? 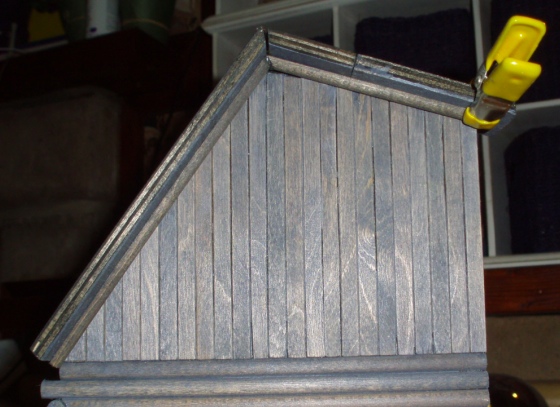 With all the roof pieces in place, I glued in the last of the support logs. I waited to add these until the roof was glued in to be sure that the logs lined up with the ones on the bigger roof piece.

It’s hard to get a good photo of the inside of the roof, but from this one at least you can see how the support logs come down to the roof opening. I’m planning to cover all of the exposed plywood edges with trim when the house is finished, to cover up that striped edge. 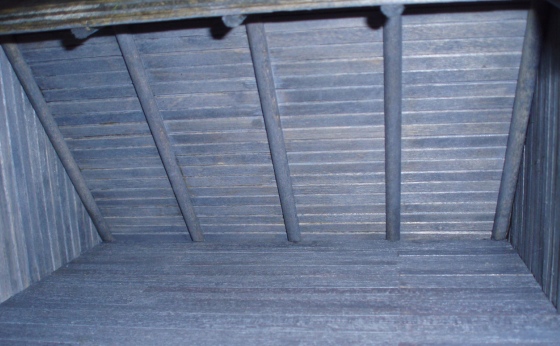 With the gray stain applied to the entire house, I installed the windows. The kit came with a jig for assembling the frames. 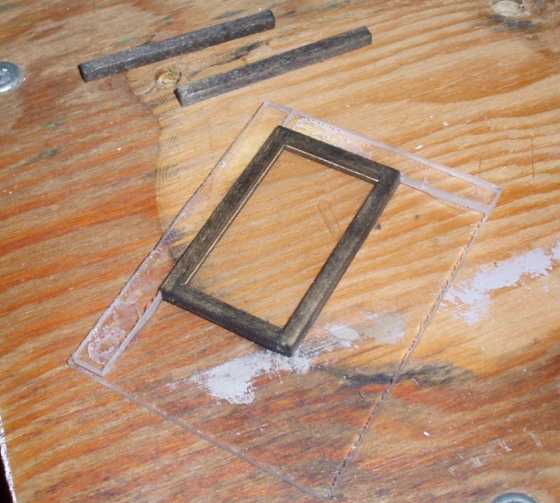 Here’s how they look from the front. You can’t tell in this picture, but they didn’t fit snugly—there were big cracks where the frames didn’t meet up with the inside of the window holes. 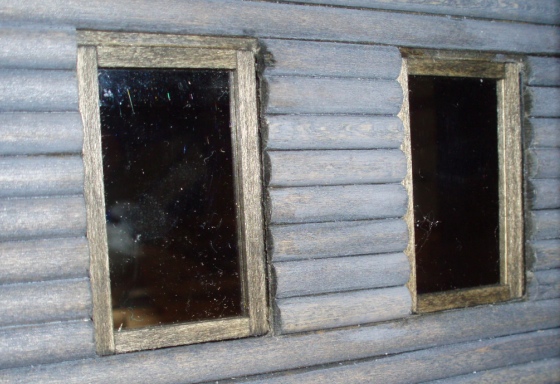 I added some small pieces of trim inside the window to minimize the light that shines through the gaps. The trim is made from window mullions from half scale Houseworks windows. This didn’t fix the problem completely, but I’m planning to add curtains, too, so I don’t think those gaps will be noticeable at all. (And hey, what log cabin doesn’t have a few drafty spots?) 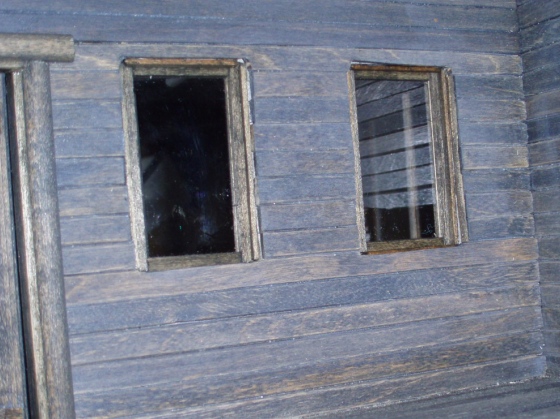 Once I get the porch roof and shingles on, this house will be done! I’m already thinking about the furniture and have been collecting kits and accessories. Last week I won an eBay auction for a hodgepodge of half scale stuff that’s perfect for this house.

Some of these things will be used elsewhere (like the bag of modern groceries…), but the broom, the shelf, the straw hat, the bucket, the clay bowl, the apples and apple cider, the tray of vegetables, and the biscuits and pies are perfect. The package arrived today and the pieces are all very nice and true to scale. It looks like a batch of artisan pieces that someone collected for a country-themed project. A fortuitous find!