As previously mentioned, it took a good three months for my pepper plants to bear fruit. Two months later, they’re finally turning the bright colors you see at the grocery store. 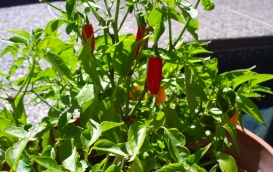 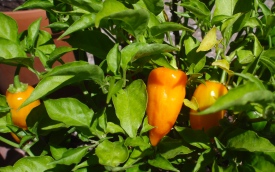 The red serrano peppers are pleasantly spicy. The orange habaneros are a little… less pleasant.

So now the race begins… how many hot pepper recipes can I come up with before we get sick of them?

On the smaller end of the spectrum, my parents were in town this week, and my mom and I put together this 1:24 scale heart-leaf philodendron kit while she was visiting. 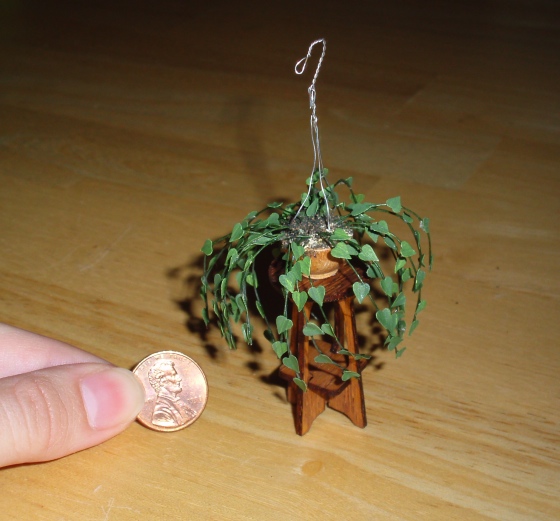 I bought this kit years ago from SDK Miniatures (along with several others) and never got around to putting it together. My mom wants to decorate a half scale conservatory to look like the life-sized greenhouse attached to her house, and this will be the first plant to go inside.

We ran into some issues with the kit—probably related to it being several years old—that resulted in some last-minute substitutions, but I think it turned out pretty nice. The pot broke into a million pieces (okay, five, but they were small!) when I tried to tape it down to the table per the instructions, so I used a little wooden bowl I had that was about the same size. Also the clay that’s supposed to go in the pot was completely hard and even adding water didn’t soften it, so we used wood putty instead, which wasn’t quite as sturdy as the clay would have been, but once everything dried I think it looked pretty good.

She took the plant home with her but I might end up getting another philodendron kit for myself, since it turned out pretty. But in the interest of being thrifty, I’ll build up the ones I already have, first…