While I’m waiting for my new lights to arrive, I’ve gone back to work on the front of the rowhouse. I want this to look more or less like a San Francisco painted lady, and at the beginning of this project I spent a lot of time poring over library books to get ideas for how I could decorate the front of the house.

First up: windows. I’m using two window styles, a traditional window with a crown molding-like pediment on the bay window, and bonnet pediment windows everywhere else. Here they are during painting… that’s a lot of painting! 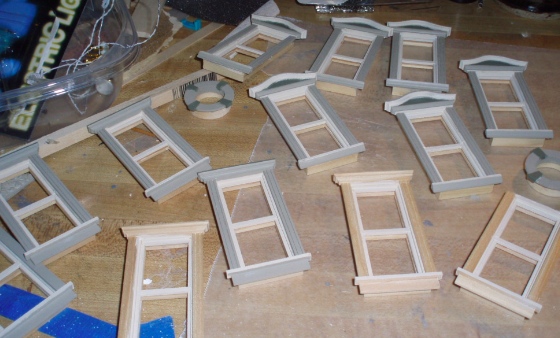 I can’t really complain, because painting these is much quicker than 1:12 windows and the acrylic is removable, so I don’t dread it as much as on certain other projects that will remain nameless…

Here’s the front of the house with the windows in. Pretty, but awfully plain compared to a real painted lady. 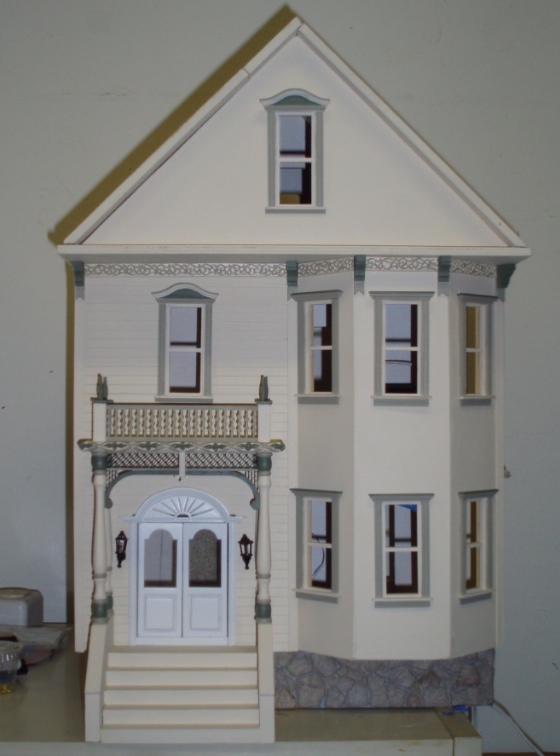 I got some floral resin molding to use on the eaves of the house. I tried painting the flowers and vines, similar to how I did the resin molding on the porch, but didn’t like how it was turning out. So I decided to paint the whole piece with Olivewood and be done with it.

Originally I only planned to use two pieces of molding, but decided to add a third piece at the bottom. Here’s the basic idea (with the new piece not painted yet!) 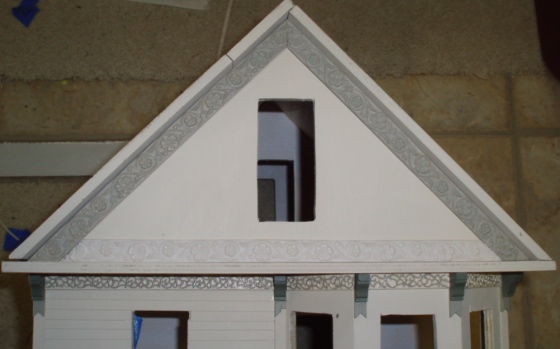 And I used the same trim around the bottom of the bay, being careful to match up the design at the seams.

While the paint was drying on those, I worked on a decorative panel to go between the two rows of windows. I started by cutting pieces of trim to form the borders of the panel. (Not sure what this rounded trim is called… it might be chair rail?) 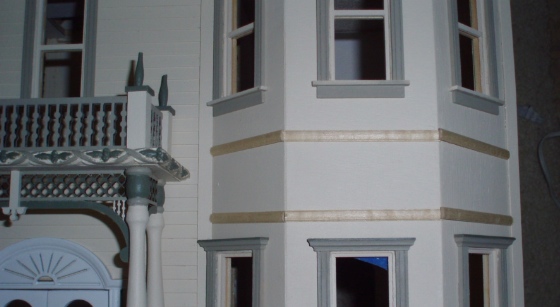 I eyeballed the placement between the two rows of windows, drawing pencil lines on the inside of the trim pieces to have a general idea of where paint should go.

Then I masked just outside of those lines. I used a ruler to make sure the distance between the tape edge and the bottom of the bay was about even all around the bay.

I painted this with two coats of Mossy Green, using a sponge brush instead of a paintbrush on the second coat, so there wouldn’t be brush strokes. (Some of the house color still shows through so I think I’ll do a third coat.) 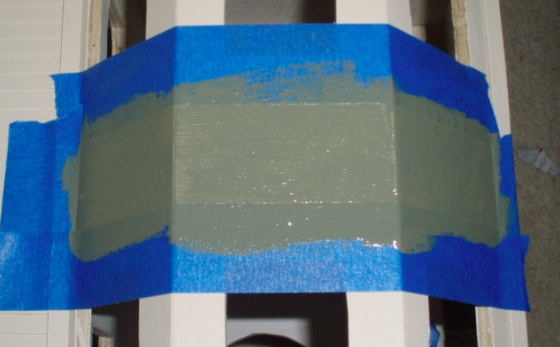 Meanwhile, I painted the trim pieces with Olivewood. And here’s how it looks (the trim pieces aren’t glued on yet). After seeing it, I think I want to make each of these a self-contained panel with four sides, rather than one big panel that only has edge pieces at the far right and far left. So I’ll need to cut 45-degree angles on the corners of the existing horizontals and cut some more verticals. Haven’t done that yet. 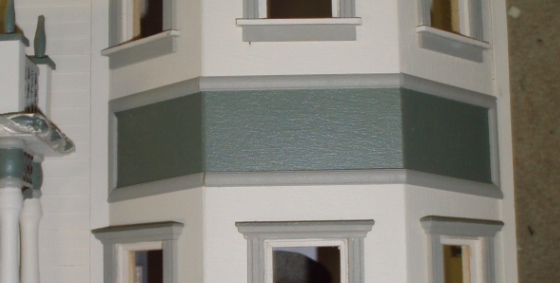 And here’s the overall look. I haven’t glued on the resin trim pieces yet… I’m waffling on whether or not I like the three pieces at the top, or would prefer just two like I had it originally. The big white triangle formed by the three trim pieces is sort of putting me off, but I’m going to wait until the panels on the bay are done to decide for sure. I’m also thinking of adding triangular panels on either side of the top window, which would theoretically make the green trim look more in balance. 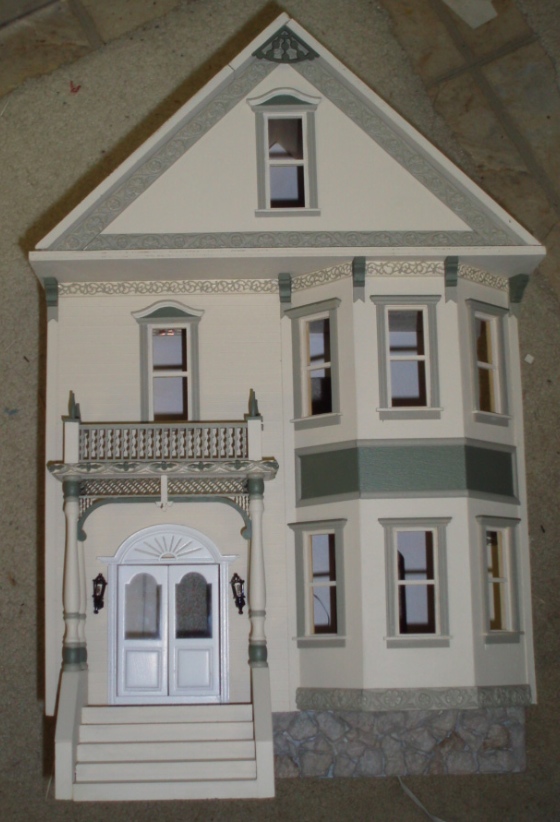 (Note: The coach lights have wiggled around, I need to straighten them and get some more glue under there. Also, I’m still planning to replace the front door with one that’s wood colored…)

Cir-Kit half scale lights, and the sadness they caused me