Rowhouse kitchen from a kit

The cabinets are made from wooden boxes with trim pieces laid on the fronts to give the illusion of cabinet doors and drawers. This means the doors and drawers don’t open, which is fine with me! 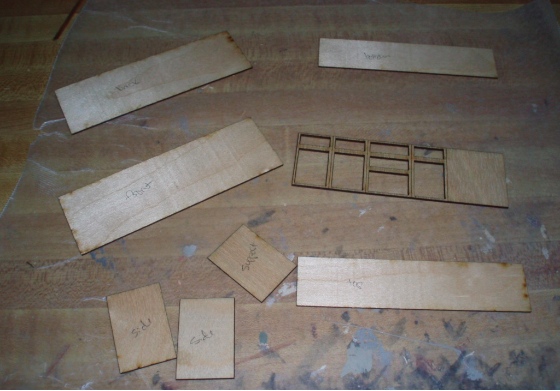 Here’s the basic layout. The L-shaped counter is exactly how it comes in the kit — no bashing there. But the tall piece on the left originally had three segments – an oven/microwave unit, a pantry, and a tall and skinny fridge that I didn’t like. I removed the fridge portion. 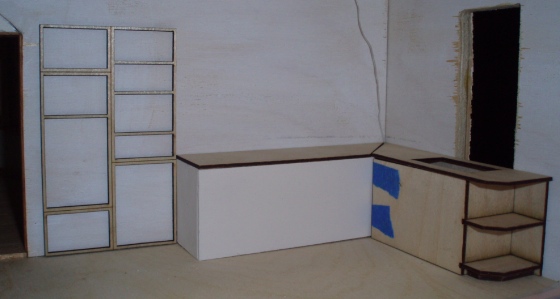 Instead, I’ll use a magnet fridge (but i might try painting it “stainless”…) 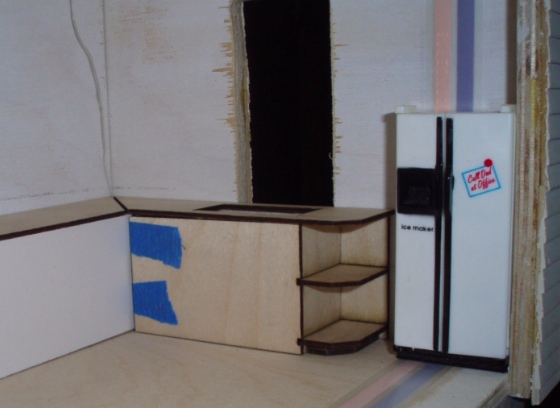 Since the L-shaped cabinet is going together as designed, I breezed through its assembly pretty quickly today. I painted them with a Behr color named “Tuscan Beige” which is essentially off-white. 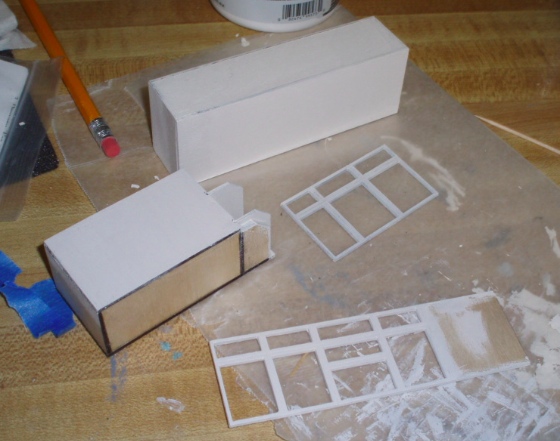 The kit is designed to have decorative paper placed behind the trim piece. I’d been planning to use this wallpaper from Itsy Bitsy Mini. It looked neat in theory.

But I didn’t like it in practice. I think the decorative paper is a neat idea and it would work well in a shabby chic house, but maybe a little too kitchy for my Victorian.

Instead, I painted the cabinet base with the same Olivewood paint I’m using for exterior trim. 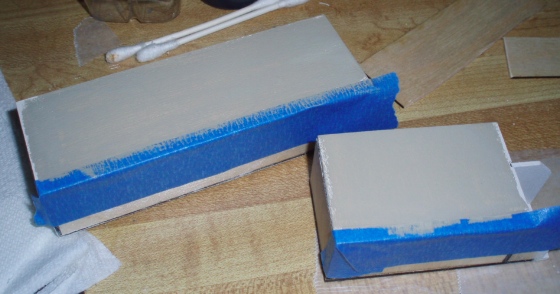 I like the idea of this but am not totally sold on it yet. I feel like the white part should be wider, or the doors should have some sort of detail, or something. Might still play around with it. 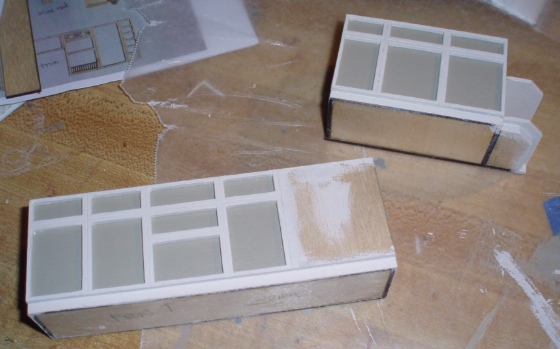 Next I moved onto the oven unit piece. I separated the fridge piece that I’m not using from the rest of the trim by cutting it apart with an Xacto knife. (The Greenleaf Fairfield for Miss Lydia Pickett blog gave me the confidence to try this!) Then I cut down the front and back pieces — rather sloppily, with scissors — and sanded them down to the right width with the disc sander. 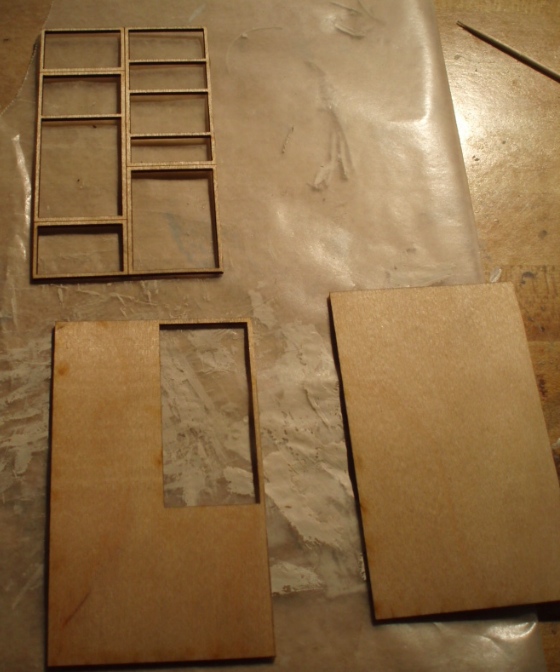 I thought I knew what I was doing, but apparently I didn’t. The shelves that goes inside this unit to form the pantry has notches at the front of the shelves that hook into the hole cut out of the front piece, and when I “hooked” them I found that my front was slightly off kilter with the back. In this picture, the edge of the front piece should be on top of the dark line (the front edge of the side piece), not beside it. 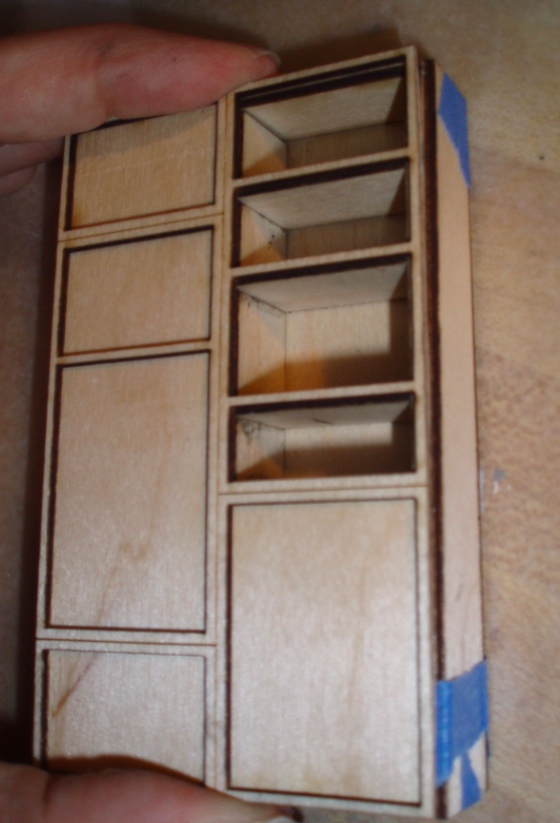 And here you can see that on the left side, the front piece juts out beyond the side of the unit, rather than meeting it flush. 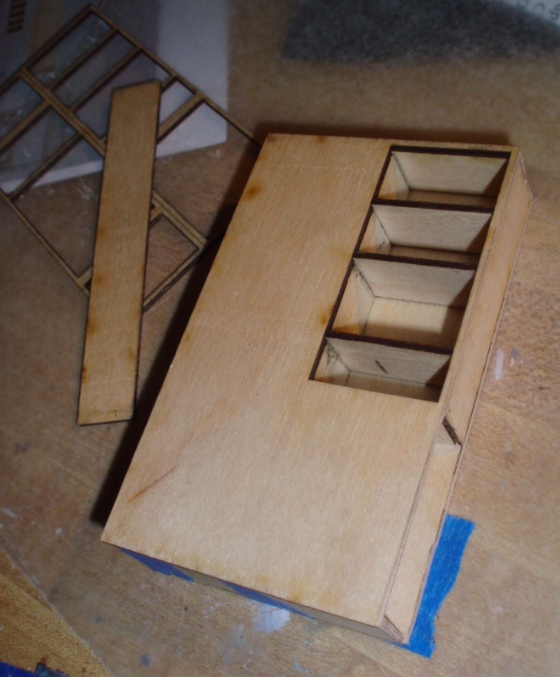 There’s now an open hole at the bottom of the side unit, but when it’s flush against the L-shaped cabinet you can’t see it. 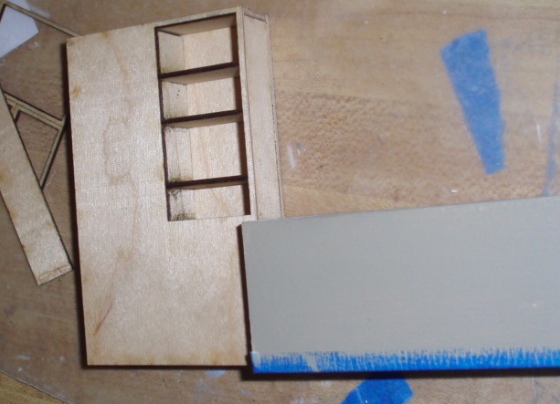 Here’s where I ended up today… not too bad for a day’s work. The oven unit isn’t glued together yet, and still needs another coat or two of paint.

I would love to do hardwood flooring in this room but don’t have enough of LittleWonders lumber strips left to do it, and am not sure if/when I’ll ever find more of those. Since the rest of the house is done with those strips I’d rather not use something different in the kitchen.

Instead I’m looking into tile options. I found some pictures online of a kitchen I really like, that has similarities to this kit. Tiles like the ones in the picture exist in miniature but they’re 1:12 scale. I’ll swing by the dollhouse store tomorrow to see if they have this in stock and how large the tiles are. If they’re 1″ across they’d probably look too big in my half scale house, but .5″ tiles would be fine.

Rowhouse – railings and a light in the stairwell