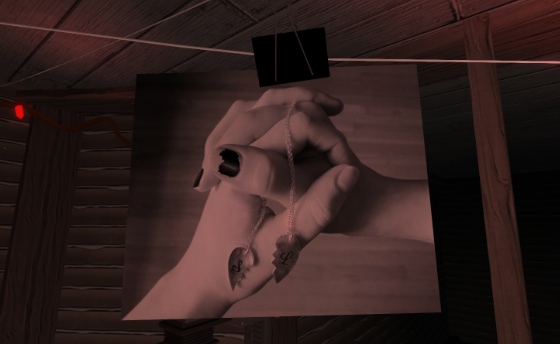 A few months ago I wrote about my early impressions of Gone Home, a game about a teenage girl set in the mid-90s, when I was a teenage girl. That game is now out, and my 4.5-star review has been posted on Adventure Gamers. The short version: this is an incredible work of interactive storytelling, and anyone remotely interested in the subject matter or the practice of telling a story via a video game should play it.

This is only the second 4.5-star review I’ve given at AG in my nine years writing there (and I’ve never given a five!), so I’ve been thinking a lot about why the game had such an impact on me. It’s a combination of reasons: 1) the story and setting really resonated, and 2) the story is incredibly well told. Not only well written (which it is), but also well crafted.

I’m right now in the throes of finishing up my second novel—I’m at the point where I have to take the 300+ pages of scenes I’ve come up with over the past few years and mold a pieced-together story into its finished form, a draft that doesn’t only achieve telling the story from beginning to end, but achieves it in the right way. I want every scene to count, for the ending to be surprising but also inevitable, for the structure and pacing to “work”, for the reader to reach the end and feel like they’ve just read a novel in which every detail was supposed to be there. It’s not an easy thing to do… we’ll see if I pull it off.

Gone Home did all this, in incredible ways. Even more than thinking back on the story—which is always a good sign that a game has affected me—I keep thinking back about how it was structured, how the details bolstered the narrative, how the pacing was achieved. It’s a story that could easily be told in a movie or a young adult, but not in the same way (and probably not with the same impact on the audience). The designers made everything “work” and it’s no wonder that the game’s been getting high scores across the board.

You can buy Gone Home from the developer’s website or Steam. Even if you don’t consider yourself a gamer, if you’re a writer I really suggest you play it. It’s an exciting example of interactivity and good stories can play nicely together.

Meanwhile I’ll be rewriting Chapter 8 of my novel… again.

Rowhouse kitchen from a kit