Since the Gull Bay is enclosed and the inside will mostly be viewed through the windows, I wanted to keep the interior light and simple so it’s easy to see the furniture. I decided to use bright white scrapbook paper for the best possible illumination inside. 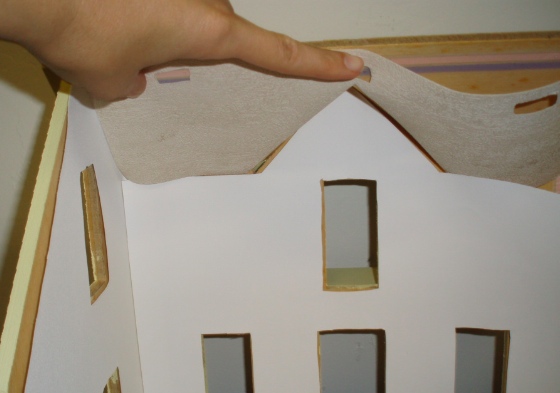 But looking at the two pieces, I decided to use them as a template to cut one piece of wallpaper to accommodate the dormer. The outer line is for the cutout in the ceiling, and the inner line is the inside wall of the dormer. 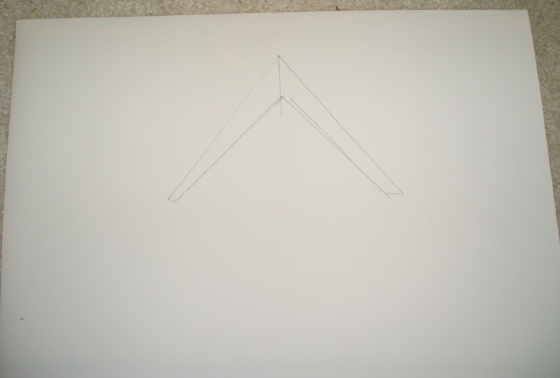 I seemed to be on the right track. 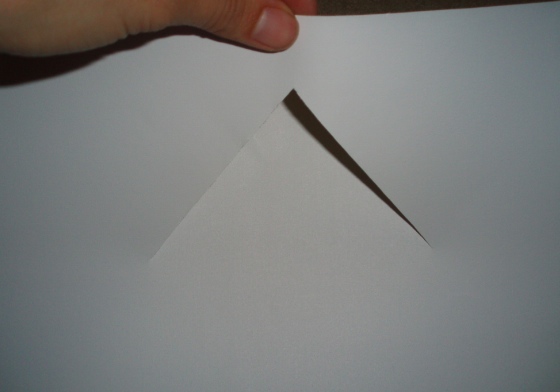 Using two separate pieces for the inside edge of the dormer ceiling, here’s how it looks. Not quite perfect around the dormer, but the best I could do. 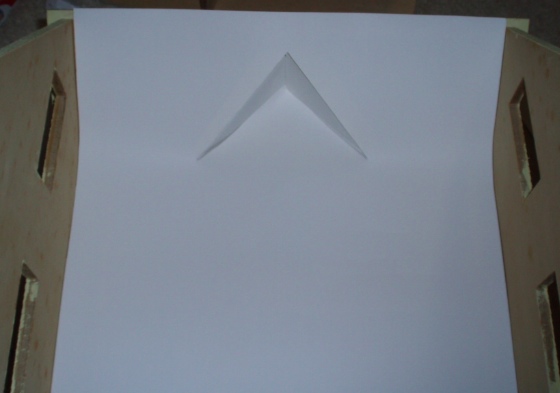 As usual, I sprayed my wallpaper with matte sealer before gluing it in. 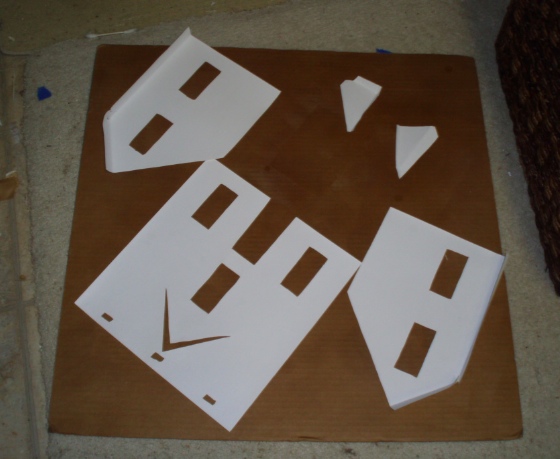 I started with the side walls and inside dormer pieces, since these wrap around. I glued these with Minigraphics wallpaper mucilage, being very careful to drop the paper and wash my hands every time I got glue on them… 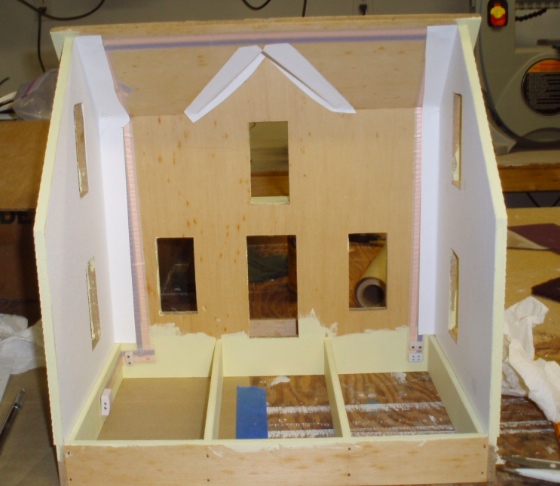 Here it is with all the pieces glued in. For the sockets, I had cut holes just large enough to include the pinholes I’d already poked into the tapewire, and I was careful not to get glue right at the edges of those holes that could seep into the holes and the tape. Just in case, as soon as I had the paper in I reattached my sockets and made sure they still worked. (They did!) 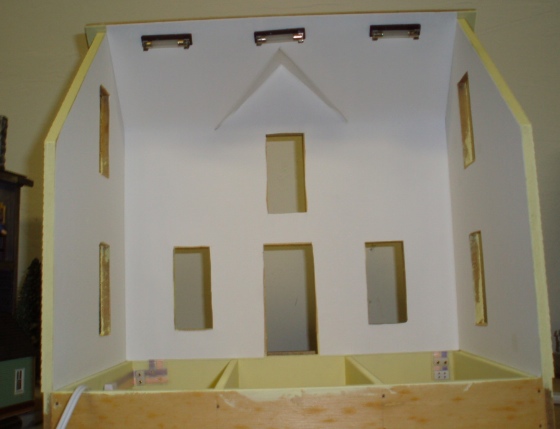 These sockets have pins that push into the tapewire with optional screws, which I added at this point for extra stability. The screws were longer than the depth of the plywood. To deal with this, I screwed one in a little bit to make a hole in the wood, removed it, snipped off the pointy end with wire cutters, and then re-inserted and screwed it in all the way.

Each socket has two screws but I only used one of them on the center socket, which is a little crooked… I was concerned about the second screw touching both colors of tapewire and creating a short circuit.

Before starting on wallpaper for the inside of the house, I stained the upstairs floors with Ace brand mahogany stain. Downstairs will have flooring paper to cover up the wires from the ceiling lamps and the hole I drilled for the plugs to fit through, but I compulsively stained the downstairs floors too. Just for kicks. 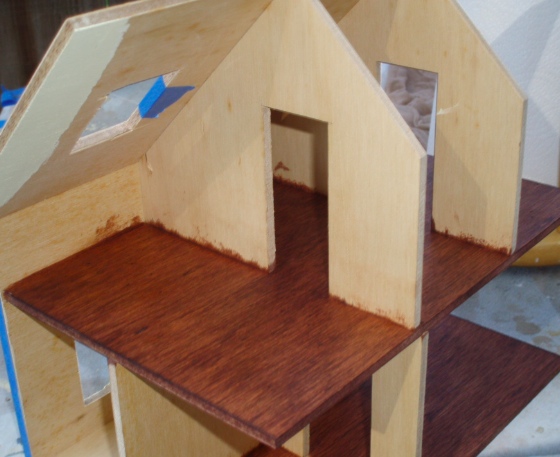 There are a bunch of holes in the upstairs plywood that look sort of like knots when stained. I thought about scoring the floors to create the illusion of floorboards but decided not to spend the time. Once the furniture’s in and the house is closed up they’re going to be hard to see. 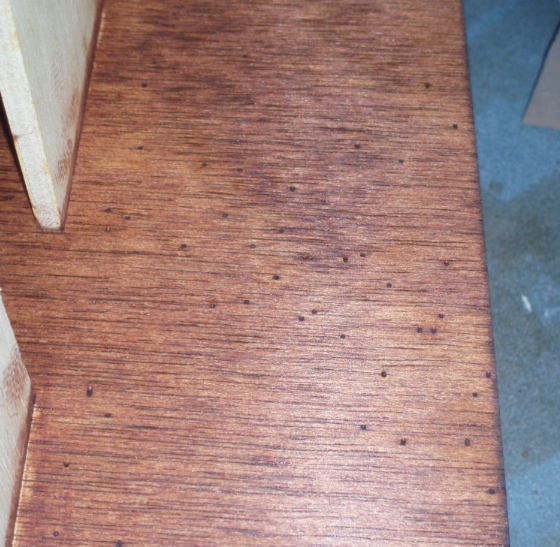 I had a piece of flooring paper, already stained with a hodgepodge of shades, that I cut for downstairs. When I pulled out the mahogany stain for upstairs I hadn’t been thinking about matching to the flooring paper. They didn’t look similar at all. 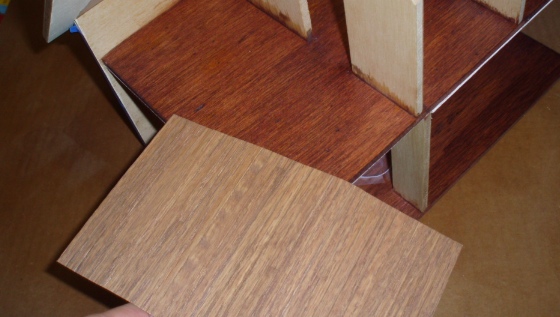 I had a vague recollection of Minwax Special Walnut and Pickled Oak being on the piece of flooring I was using (which I’d played around with but ultimately rejected as too dark for the rowhouse kitchen). I tried adding these to the upstairs floors but the color was still too different. So, I covered up the downstairs flooring with a coat of mahogany. 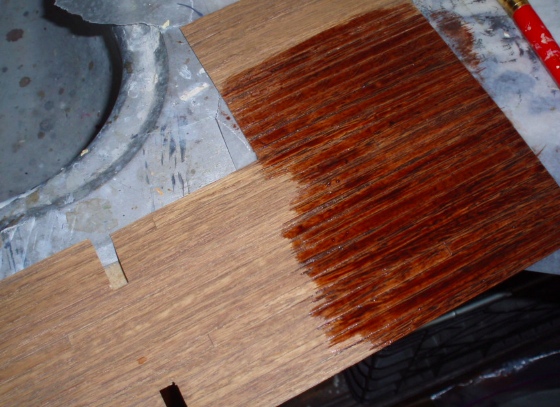 As you can see in this pic taken a few hours later, the new flooring is a much better match! 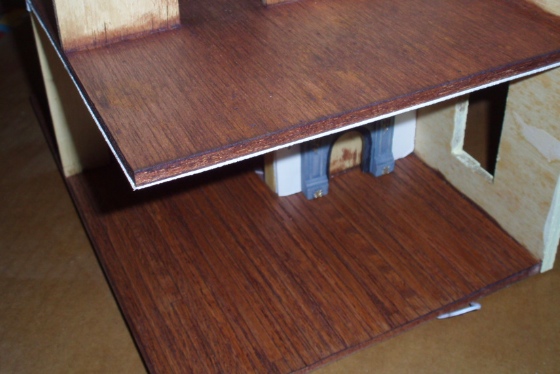 While the new coat of stain dried, I tackled another problem I’d created for myself when I cut the flooring paper. I wanted the hardwood to run straight through the dining room doorway without a threshold, so I cut the paper as one big piece. In doing this, I ended up with a less than exact fit against some of the walls — particularly this wall in the living room. 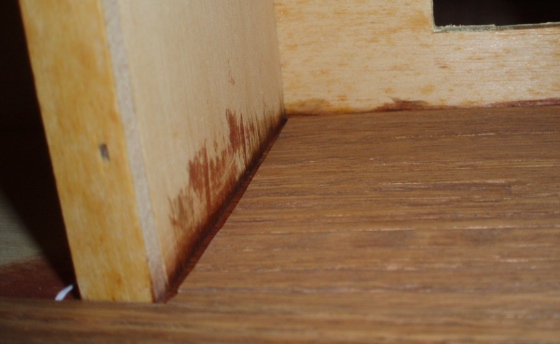 Restaining the flooring with mahogany helped a bit, since the then gap blended in better with the floor color below it. But it was still bugging me. I got the idea to add a foamcore false wall to cover up the gap, and put in a fireplace with the foamcore giving the fireplace a bit of depth. 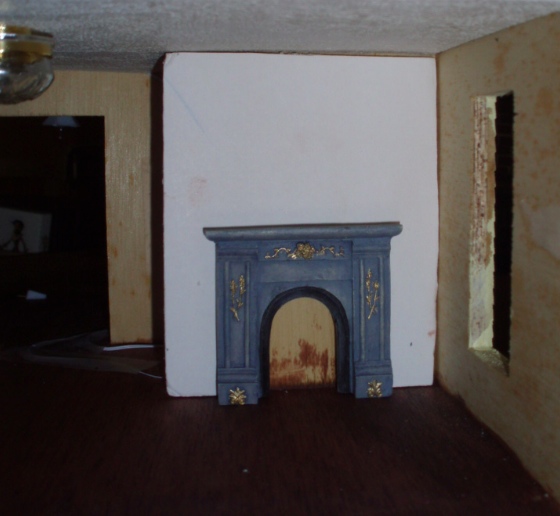 Since the wall itself will be covered up with wallpaper and the fireplace hole hidden behind the resin fireplace, I did a pretty sloppy job with it. Shh, don’t tell anyone. 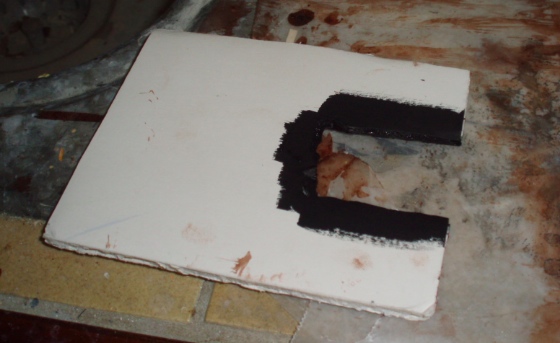 I painted the part of the wall that forms the back of the fireplace black. 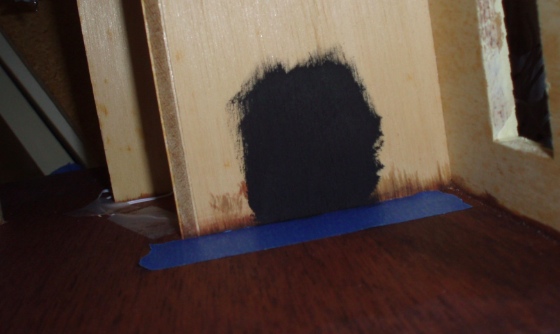 To make a hearth, I — again, sloppily! — cut out a piece of styrene half scale brick and edged it with some leftover quarter round that I used on the Rosedale’s roof.

Rather than leaving it brick colored, like I did with similar fireplaces in the Fairfield, I painted this one black to look more like a Victorian tiled hearth.

Here’s how it looks in place. After taking this picture, I added a coat of satin varnish to give it a bit of sheen. 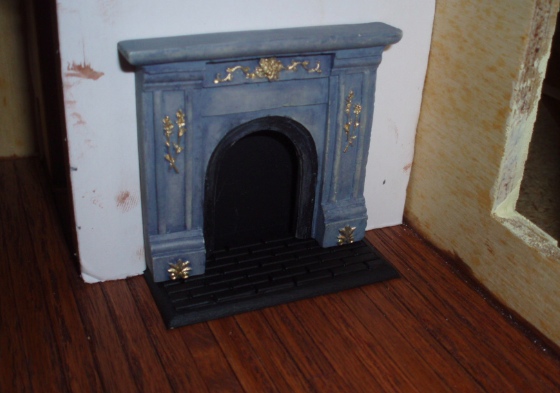