For a house whose inside you can barely see through the windows, I spent an awful lot of time on interior trim…

When the pieces slide together, there’s enough “slop” on the sides to allow for baseboards on the side walls. At the bottom, I used a piece of strip wood the same width as the floor as a spacer to position the baseboard. After gluing in both sides, I lined up the front baseboards at the corners and glued those in as well. 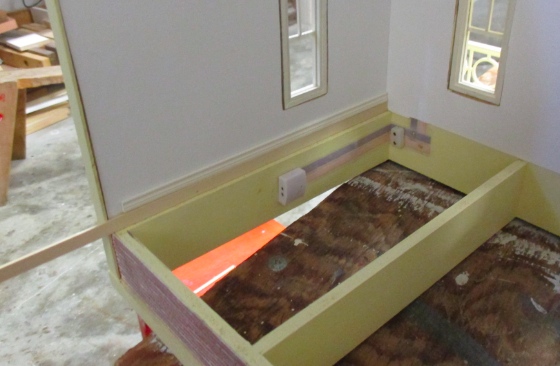 Upstairs was trickier. I figured out where to position these by sliding the house in halfway, sliding in the baseboards and gluing them so they were level with the floor (or so I thought), then sliding in the rest of the way and peeking through the windows to see if I got it right. It took a few tries. 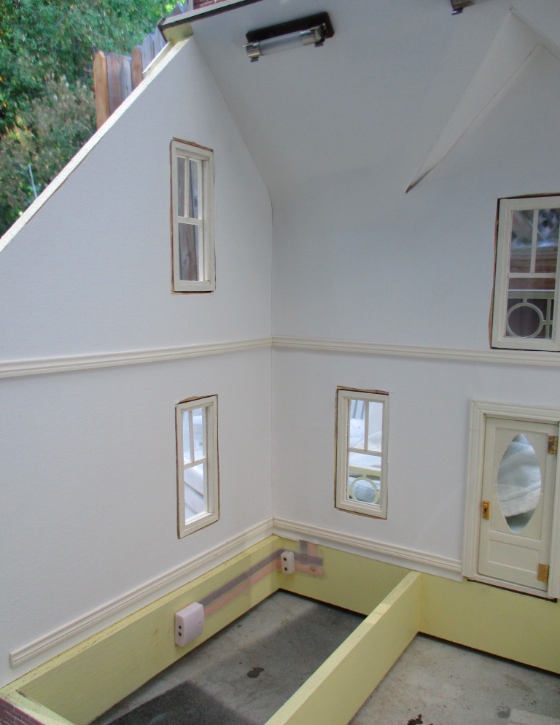 With these baseboards in, it’s a little trickier to slide the house together because the first floor needs to slide in underneath the baseboard (versus before where I could slide it in higher up and then lower the house into place). I wanted the rooms to look “finished” from any angle and am not planning to take it apart often once it’s done, so I guess it’s the lesser of two evils. 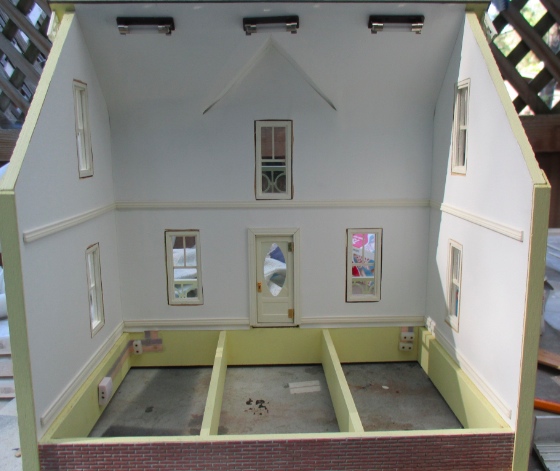 The Houseworks window trim is made to go around the window frame. Usually I don’t like this and prefer to cut it down so it’s on top of the window frame, but I decided that due to the hard-to-see view through the windows, it wouldn’t be worth the extra work. Because of how the center front window is positioned above the baseboard, though, the trim needed to be cut down a little bit. 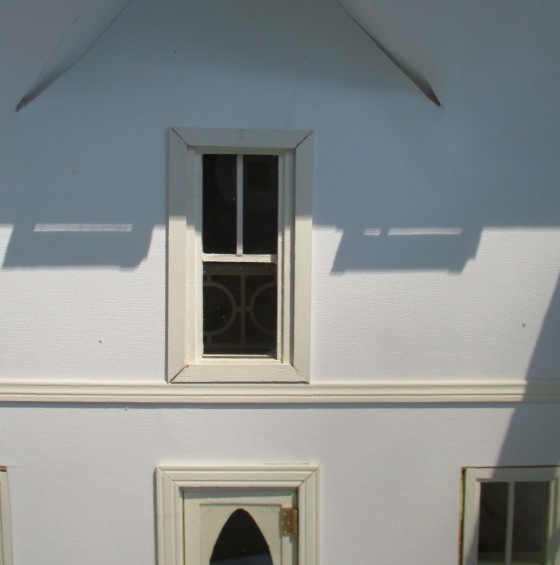 For the rest of the windows, I glued the trim around the window frame as designed. Normally the windows would stick into the room slightly and the trim would go flush around the frame. But because the house’s siding adds depth to the walls, these windows are just flush with the wall, so there’s a small visible gap around the edge of the trim and the frame.

I could have added shims to the inner edge of the trim, to hide the gap, but I didn’t feel like it and didn’t think the effort was worth it. (This process was taking long enough as it was!) On some windows you can see a dark “crack” between the window frame and the trim but it’s not something your eye is drawn to when the house is closed up. 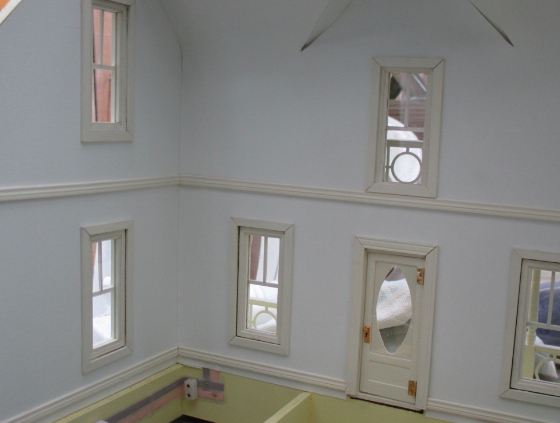 I used a small paintbrush to paint over the seams where the window trim meets at the corners. I also tried going over the black “cracks” in the big windows with paint but they were too big to blend in. Willing to call this good enough. 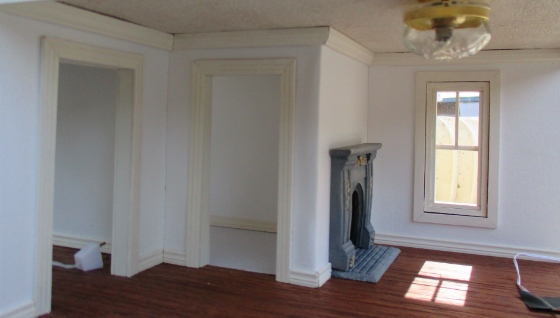 The dormers didn’t come with any interior trim (why?!) and making my own was a frustrating process. This will make me seriously reconsider ever doing another dormer in the future. It was just very fiddly and annoying.

First of all, these dormers don’t come with acrylic, and there’s no obvious way to glue in acrylic without visible glue spots. Unlike the traditional windows that used little pieces of wood to hold in the acrylic, these don’t have a lip around the edge so any wood I added to the inside would be visible from the outside, making the panes look inconsistent. I ended up cutting a piece of acrylic just big enough and shoving it in to hold itself in with pressure. It’s a little bendy and weird-looking if you really stare at it. So… don’t do that!

I chose to wallpaper my dormers (something I probably wouldn’t do again — at least not with stiff scrapbook paper) and ended up with some slits around the edges that needed to be covered up. I cut pieces of basswood to frame the inside of the space, the same way I would with a door. 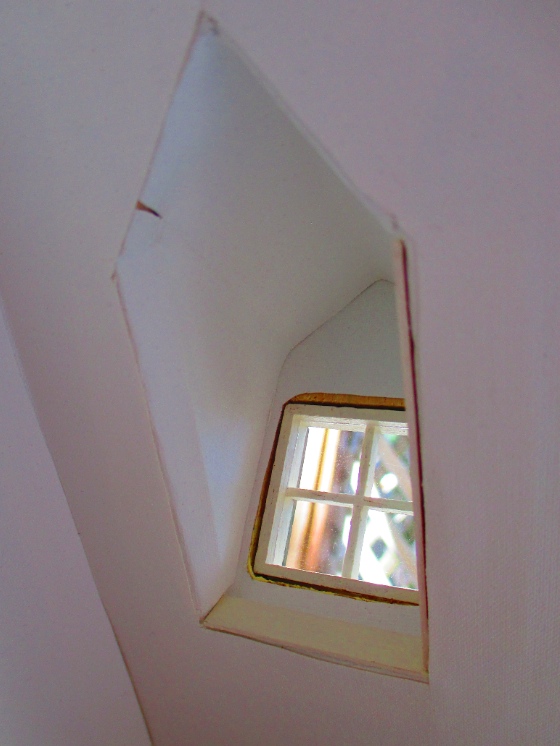 Then I cut smaller trim pieces for the outside of the opening. There’s not really a rhyme or reason to the sizes of wood I used… not wanting to go back to the store and spend more money, I was scrounging up whatever wood I could find to cover the imperfections and look decent. 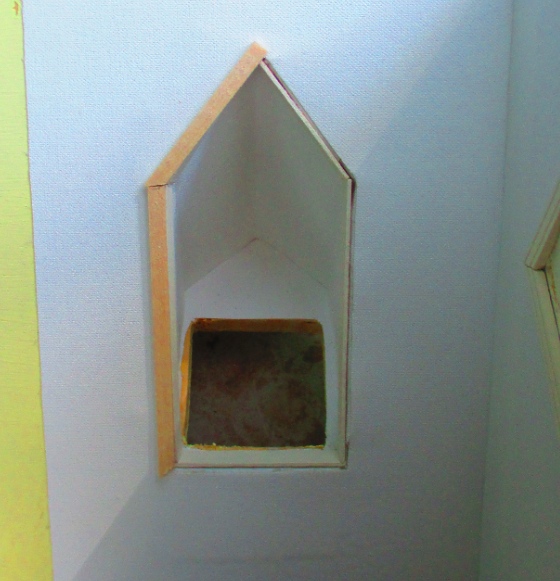 Here’s the shape of the opening. The two diagonal pieces are 45-degree angles at the bottoms, with the corners shaved off so they wouldn’t extend past the vertical pieces. I have no idea what that angle at the top is, I just sort of eyeballed it.

Here’s the trim around the opening glued in place. 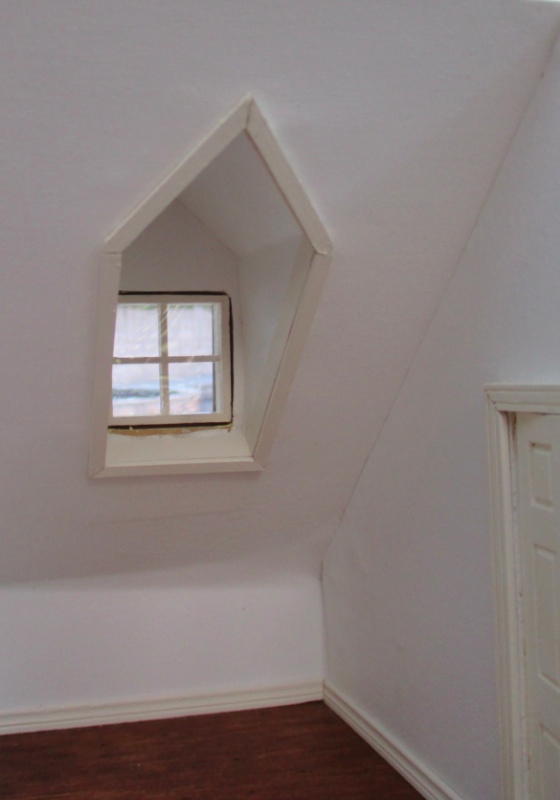 The inside of the window was the hardest part — just a very small space to get my hand into. 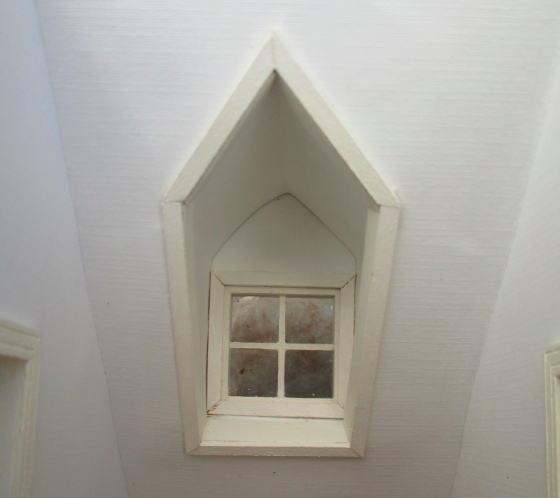 With all the dormer trim glued in, I carefully went around the seams with paint to make them less obvious. I got a few paint marks on the wallpaper inside the dormers but you’ll never notice it. Doesn’t look like much, but these dormers took three or four hours of work! 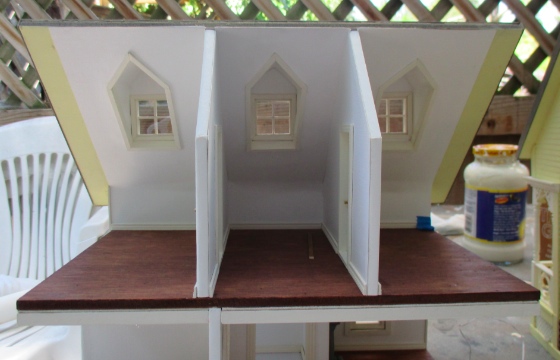