Getting started on the Artist’s Cottage

Last summer I bought this scratch built half scale house shell at a mini flea market for $2. I’m trying to finish off some smaller projects before I dig in on the Little Belle, so after a year of it sitting on the shelf I pulled it out this week. 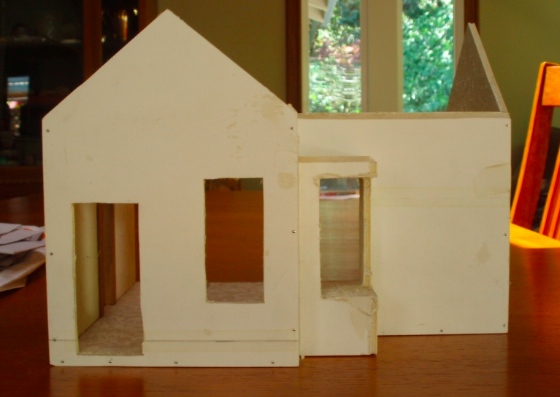 The woman who sold it to me told me the shell is made out of gatorboard, which seems to be similar to foam core. The joints are glued and also held together with pins. 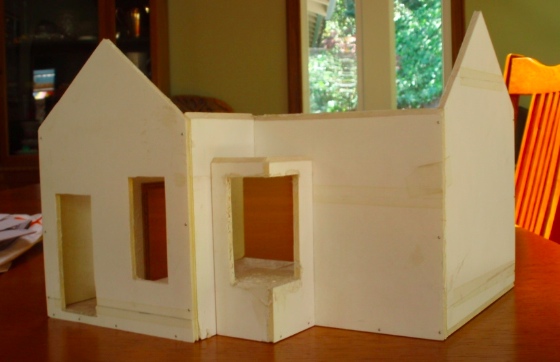 The inside wall has already been textured, which gave me the idea to make it a Southwestern style house with a stucco exterior and red barrel tiles on the roof. But in poking around online for ideas I learned that Southwestern houses always have flat roofs (like this). A stucco house with a peaked, barrel tile roof could fall into the category of Spanish revival or Mission revival (as in Spanish missions, not Craftsman Mission).

I’m making up the design as I go along, so the semantics don’t really matter, but for the sake of having something to call it I’m going to refer to it as Spanish revival. Since it’s only one room I’m envisioning a funky “off the grid” studio cottage located in some hippie area of Southern California. 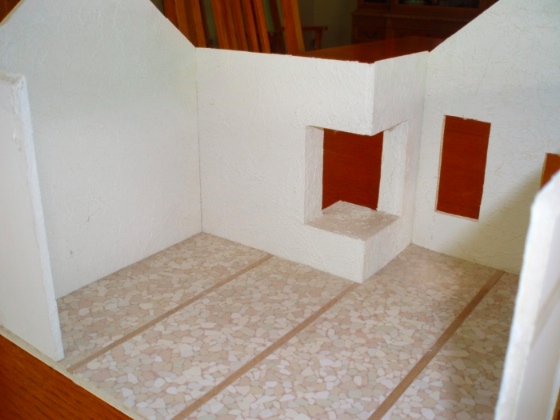 This doorway to nowhere gave me the idea to add a room to the side. I bought a Petite Properties lean to greenhouse kit with the plan of building it “inside out” so the door is at the back (to prevent having two doors next to each other at the front of the house). While playing around with the house this week, I decided that an artist lives here and uses the lean-to room as her studio. 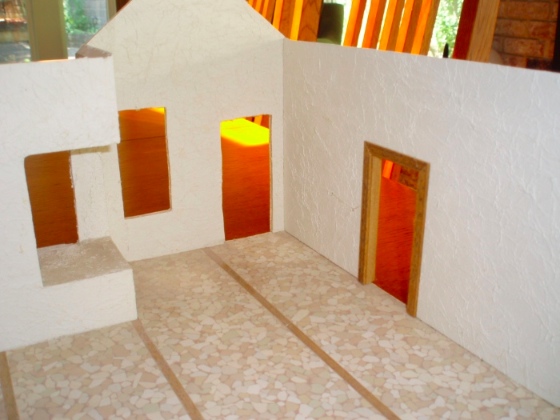 I bought a 4-panel exterior door and three 12-light windows to fit in the pre-cut holes. On the corner, the two windows needed to be modified so they don’t bump into each other. 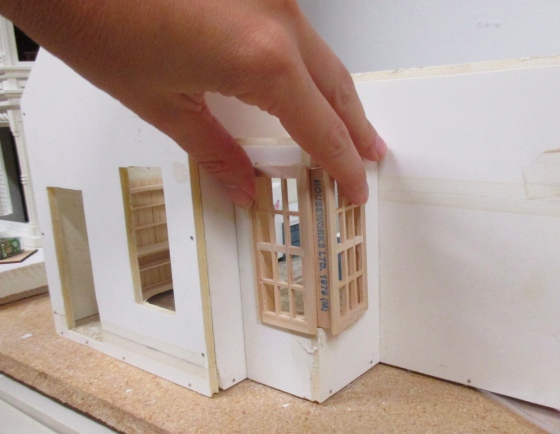 I started by removing one side piece on each window, which was pretty easy to do just by wiggling until the piece broke off. 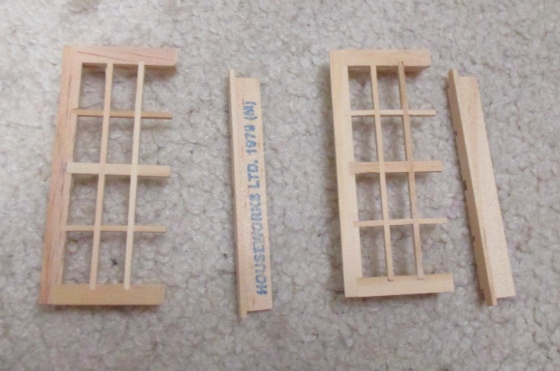 I cut back the edge of each side piece and also had to cut some notches in the windows to make them fit. I didn’t think it through carefully before cutting and ended up with some holes visible from the inside, but they can easily be covered up with trim. 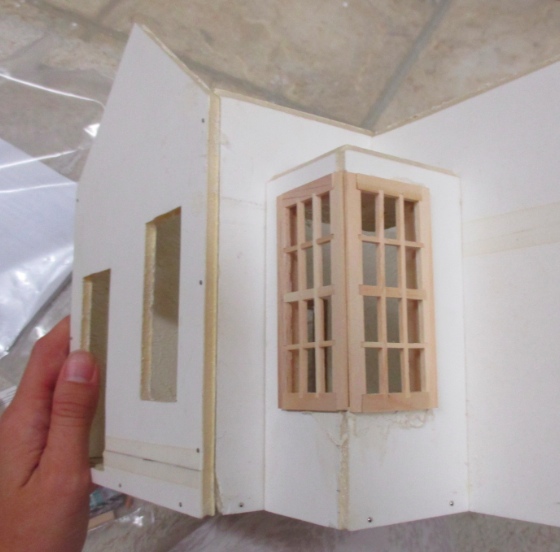 With the corner windows figured out, I stained all of the components using ACE Hardware Red Mahogany. 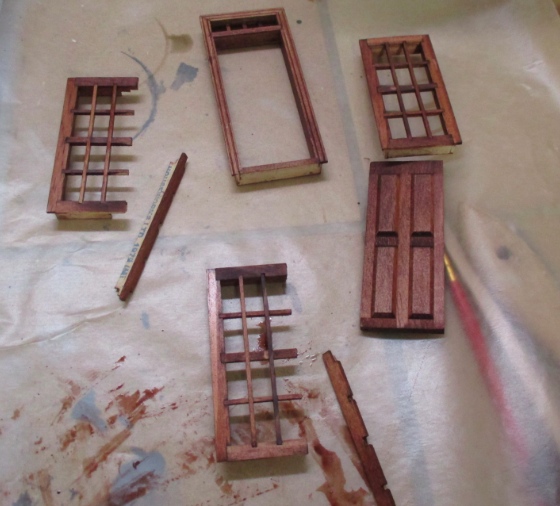 Next I stucco’d, using watered down wood filler and a sponge to make the texture. (I used this same process on my Rosedale). 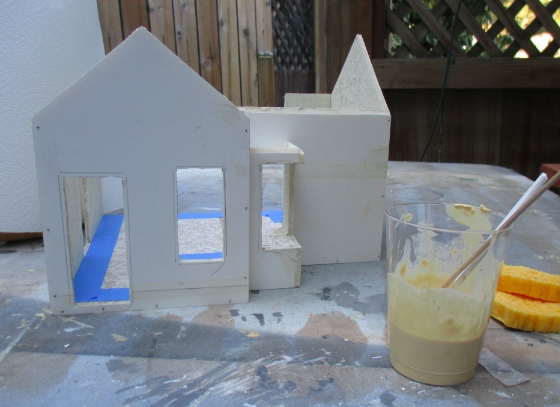 Here it is in progress. It was 90+ degrees out when I did this so the wood filler dried quickly! 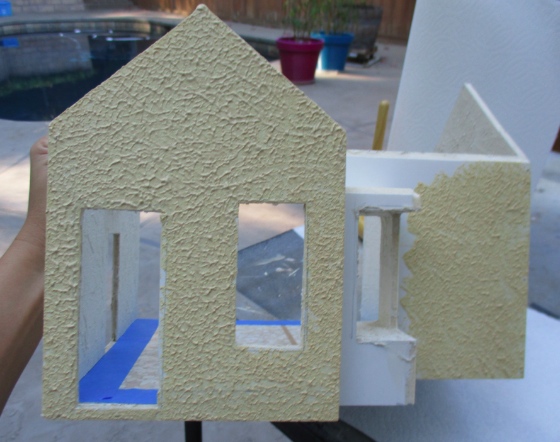 A close-up of the texture. My mixture was a tad too wet; if I’d added more wood filler I think I could have achieved smaller bumps. But the wood filler was downstairs and I was upstairs and, being lazy, I decided this was good enough. 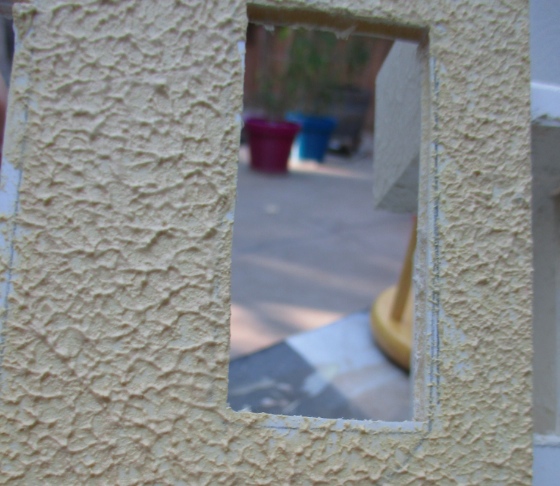 After the wood filler dried, I painted with a Behr color named Navajo White that I had lying around. Because, y’know, Navajo. 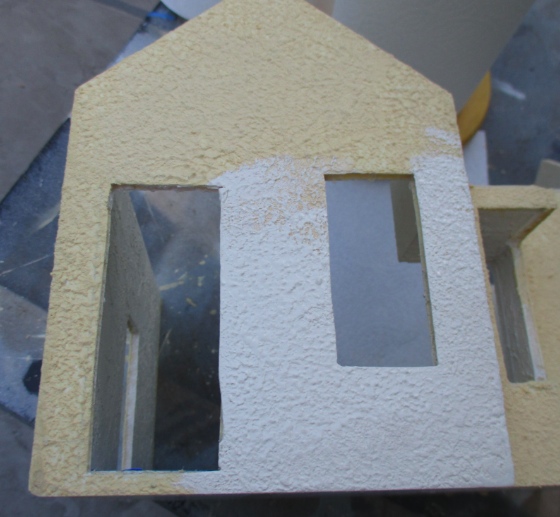 I considered covering up the interior texture (which I think was done with tissue?) with my wood filler mixture so it would all be consistent, but had used up most of the wood filler on the outside and again was too lazy to go down and mix more. So I kept the original texture inside, but did paint over it with the Navajo White. 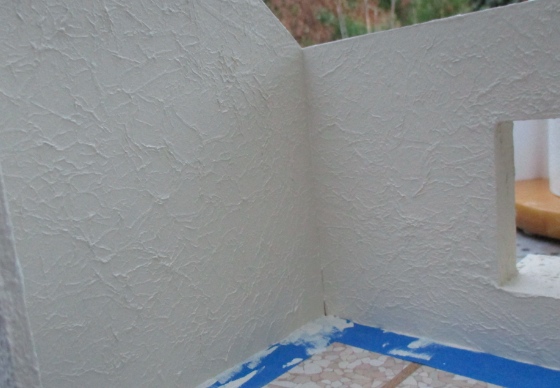 Ta da! We have stucco! 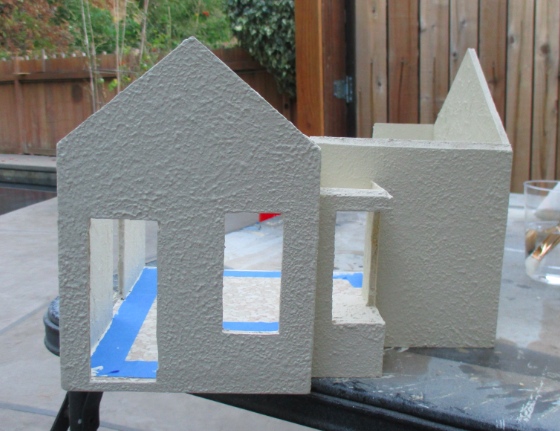 Coming up next time: floor & door.