I have been working on the gatorboard house’s barrel tile roof for two weeks, which is about one week and five days longer than I thought it would take. It hasn’t exactly been fun.

I started by painting the tile sheets with gesso, thinking this would help the paint stick to the styrene. These are G scale tile sheets made by JTT Scenery. 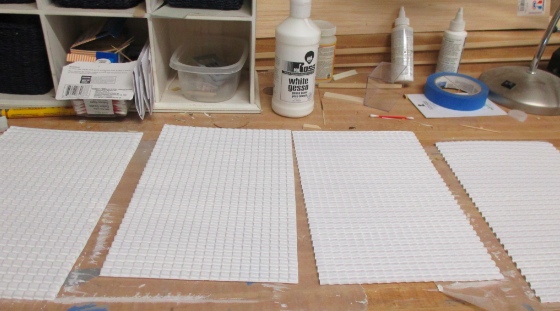 While the gesso was drying, I cut holes in the roof for skylights. I’m using the same Houseworks windows as on the house. I started by tracing around the inner edge of the window. 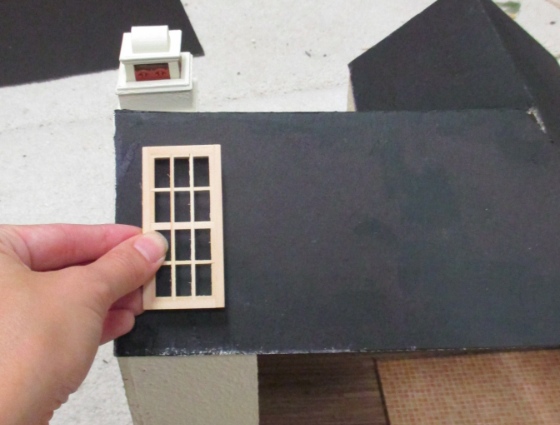 Then I cut the holes with a sharp utility knife. Compared to everything else on this roof, this part went pretty well!

Woo! Now you can see the fireplace! 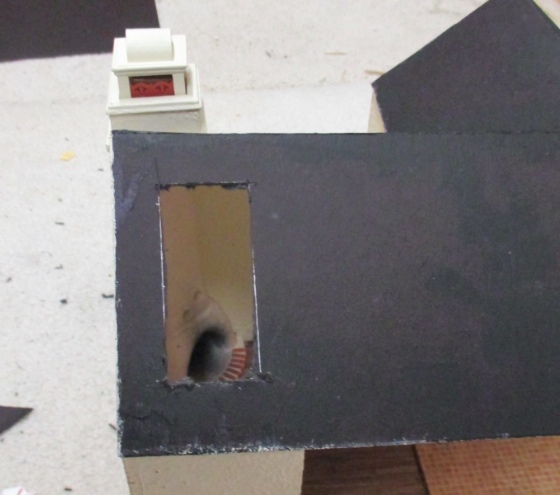 The barrel tiles add depth, so the inside edge of the window will be flush with the ceiling. 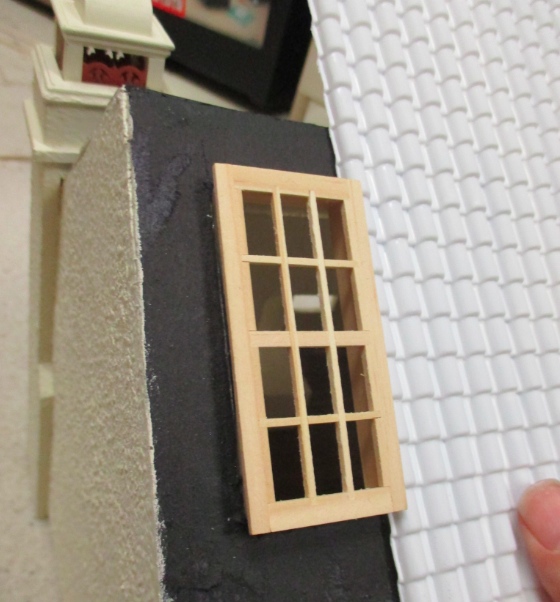 I cut two more holes on this side, making sure the windows were level. 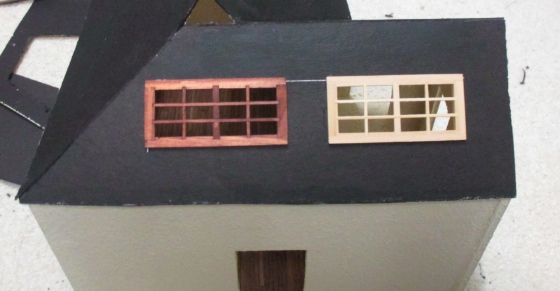 The last thing to do before tiling was add a roof over the little window bump-out on the front. 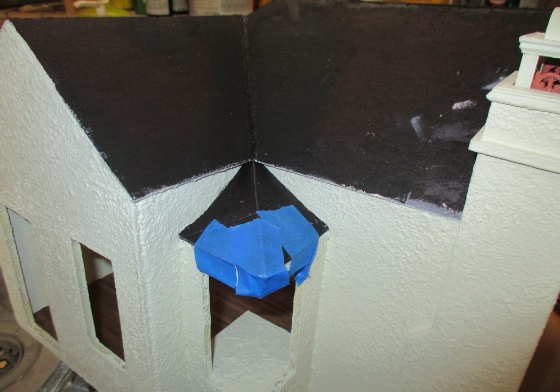 Okay, tile time! Painting with gesso *before* cutting the pieces was my first mistake, because that stuff’s super smelly even after it’s dry, and it was overpowering when I was cutting the pieces. But I cut them without too much drama and started painting, using the same mixture of orange and pink I’d concocted for the doodads on the chimney. 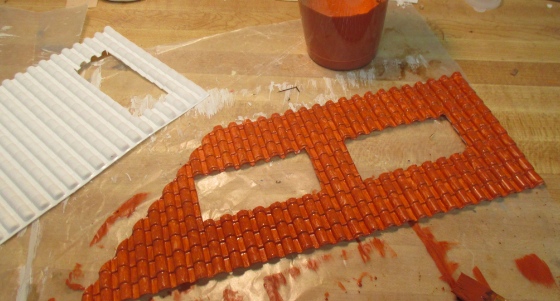 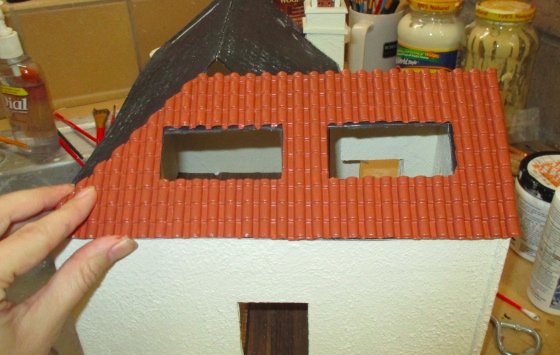 I added a triangle of presentation board to cover up the triangle where all the roof pieces meet. I’d planned to make this a window or vent or something other than tile, but in the end decided to follow the path of least resistance (or so I thought). Notice how the gesso on the underside of the tile sheets left white dots all over the roof. 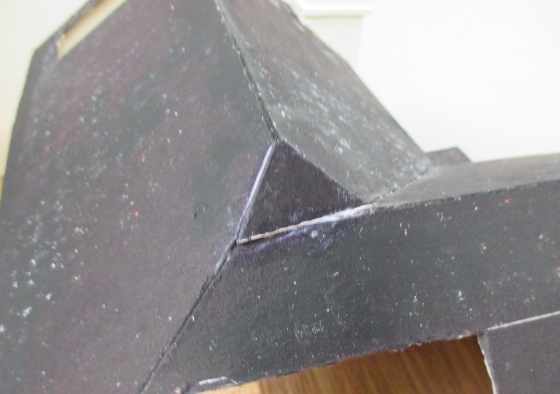 The triangle as viewed from inside. After taking this photo I went over the black seams with paint, so the triangle blends in better. 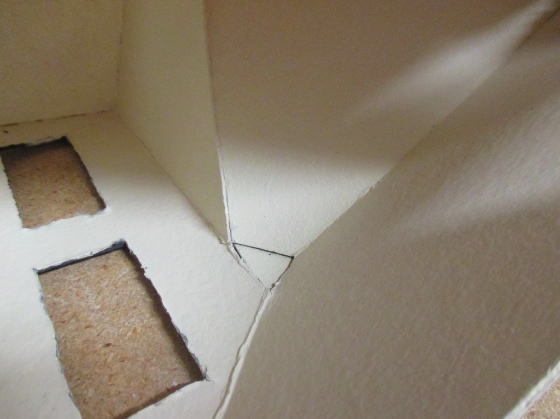 I’d painted two coats of the pink/orange on the tiles. Next I made a wash by adding water to light brown paint, to add some variation to the color. I followed this with an orange wash and a dark brown wash. 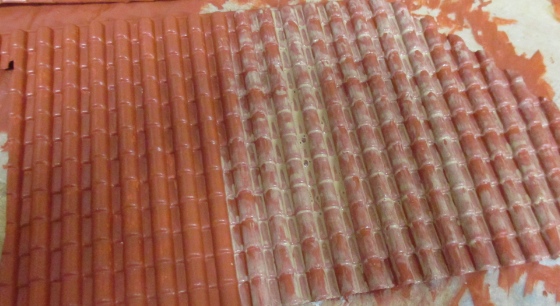 Once the paint dried, I started gluing the pieces on. Tacky glue didn’t seem to hold too well, and I had trouble taping the pieces in place while the glue dried because 1) I was trying not to scrape paint off the tiles (which happens very easily), and 2) the tape didn’t want to stick on the stucco exterior of the house. 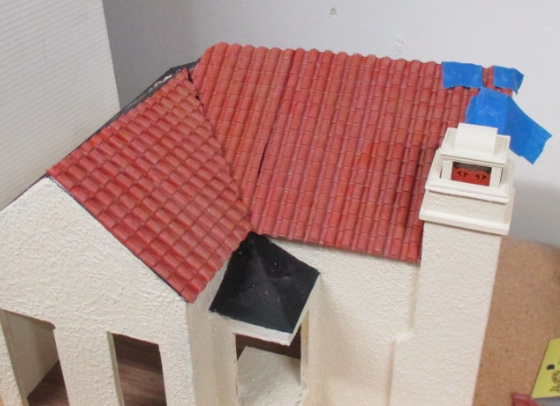 At this point, though, things were still going relatively well. Paint flaked off wherever the styrene edges or my fingers accidentally scraped, but I was able to touch this up and figured I’d go over the whole thing with another wash once everything was glued in. 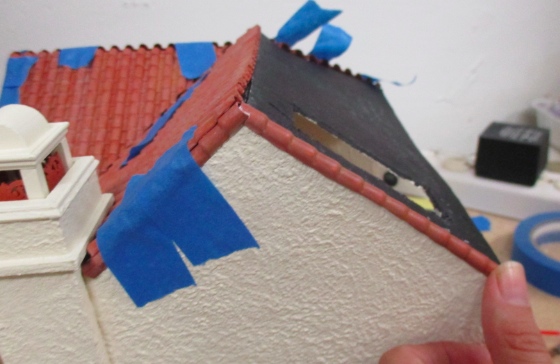 And here’s where it starts to go to shit. Since the tacky glue wasn’t holding well, and some of the pieces were sliding around, I tried reinforcing with Quick Grip not realizing it would MELT THE PLASTIC. Might be hard to tell in this pic, but the tile just to the right of the white spot is totally mangled.

I found that I could patch mangled shingles by laying scrap pieces right on top. Problem solved…? 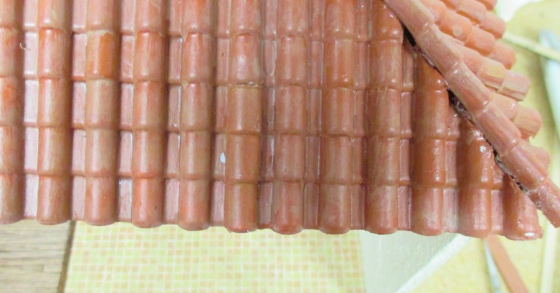 I’d used Quick Grip up at the top too, and both the tiles on the seam and the top row on the back edge of the roof had melted.

To clean up the top row, I got the “great idea” of covering it with an entire new top row of shingles.

I didn’t want to use Quick Grip on it again, so I tacky glued, taped it as well as I could, and hoped for the best.

But… it totally looks like a patch job. I should have done it in smaller sections. I didn’t want to make it worse by tearing it off, so I tried filling in the gaps with wood filler. I also had a hard time getting that corner seam covered but will spare you the gory details.

This whole process took so long because every time I glued something I had to leave it overnight to dry, and sometimes even then, the next day the piece would peel right off. And of course every time I tried to do anything I ended up scraping off more paint (so much for the gesso). Ugh, I’m getting frustrated again just writing about it…

Back to the front of the house, this seam caused me *a lot* of angst. No matter what I did, I just couldn’t glue the strip of tiles over it because there was nothing really for them to grab on to. 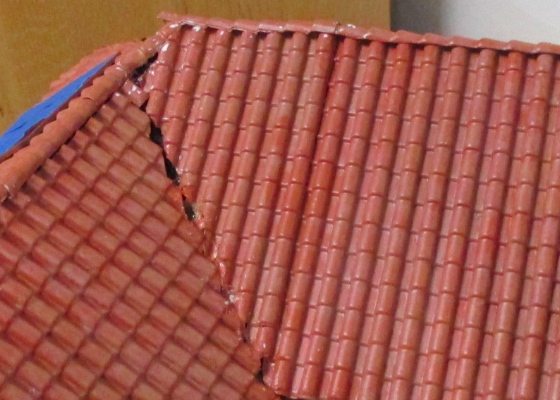 Multiple failed attempts later (again, I’ll spare you!) I managed to get two pieces of quarter round, butting up against each other, to stick. 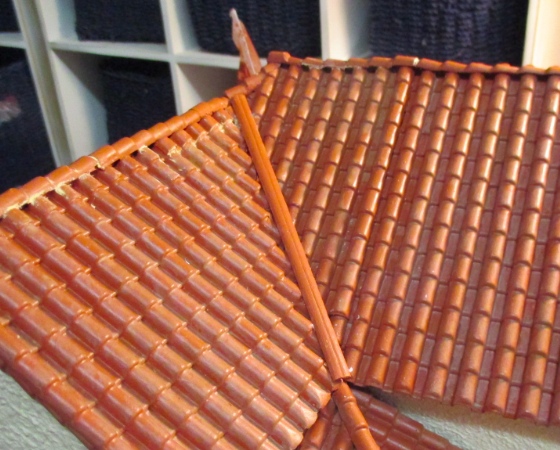 I was going to leave it that way, but realized that I finally might have enough of a surface for a tile strip to stick. 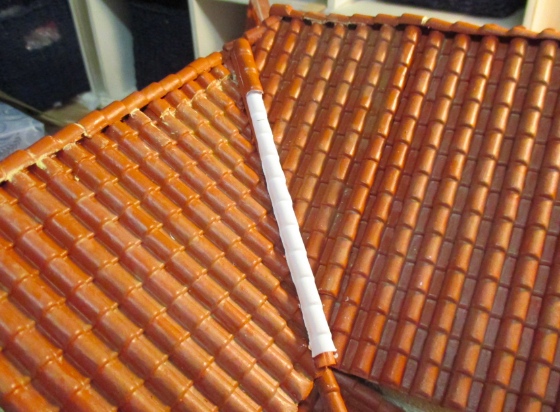 I painted the tiles… waited for them to dry… glued them, taped them… waited overnight… *carefully* pulled up the tape… held my breath… and, yes! Finally, I managed to get this. This was after at least five gluing failures, each one leaving the tiles underneath in worse shape, so it was a big victory. 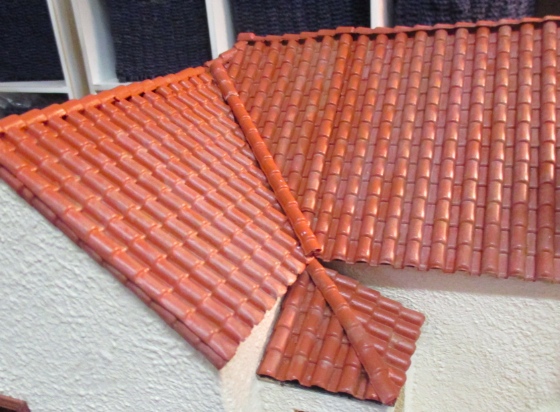 I went around the roof with the base shingle color one more time, covering up the numerous spots where paint had scraped off (ugh, those drove me crazy!), then redid the whole thing with my three wash colors. 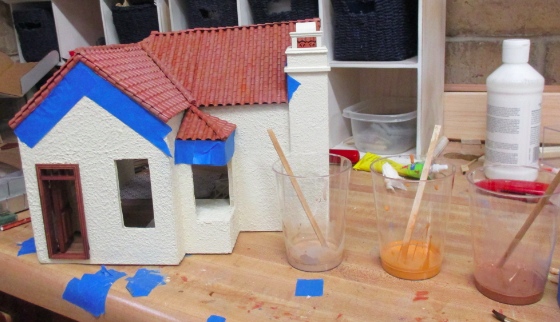 I wasn’t really happy with the black edges of the presentation board showing, so I added some black stained half-round left over from the Little House cabin underneath each the roof edges. Here you can see the trim glued on on the right, and not yet on the left and the bump-out. 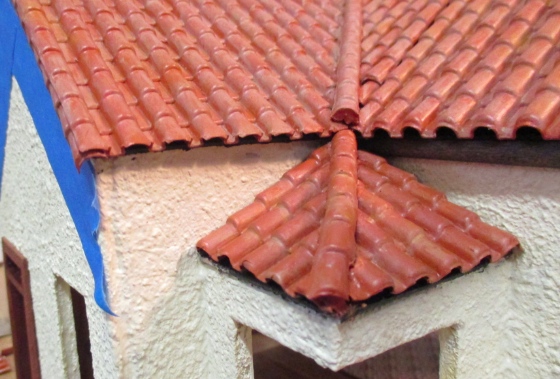 And… I’m not sure if I like it? Especially on the bump-out, it looks odd to me. I’ll leave it alone for now, but might pull it off and come up with another solution.

I did manage to straighten the roofline a bit… not as much as I wanted, but I think it looks better than it did originally. 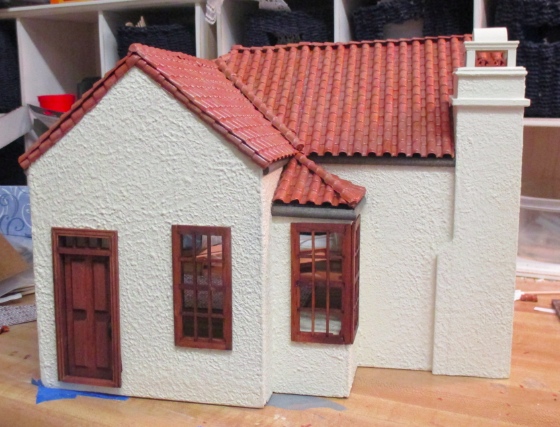 Finally, I painted the tiles with a coat of matte varnish, which I hope will keep the paint from scraping off in the future. 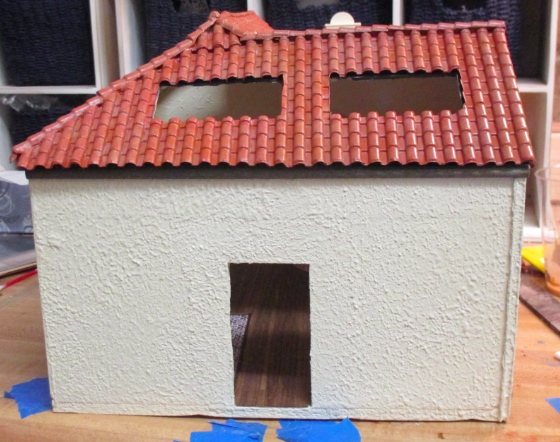 I think the color of the tiles came out really nice. But that top back row… bleh. Really unhappy with that. 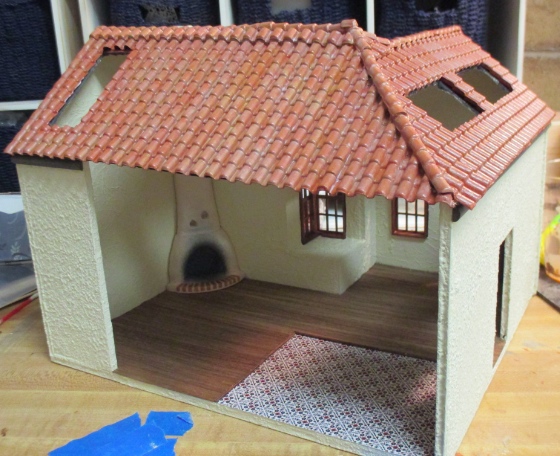 Anyway, glad this is finally done. :/ 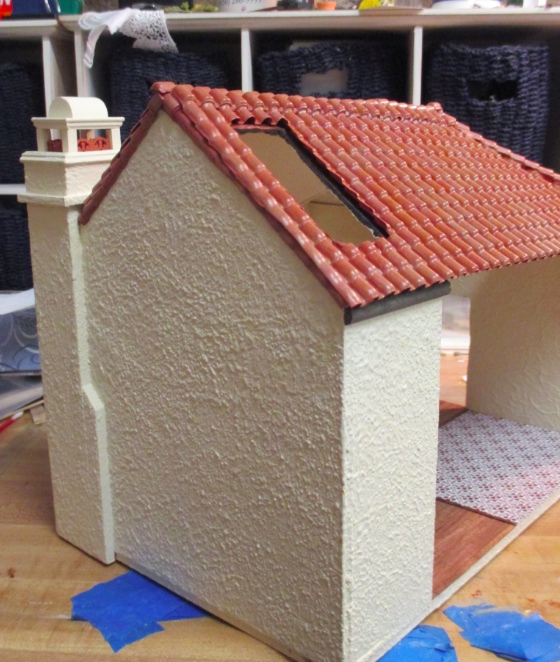