And we thought the ducks were annoying.

Over the summer, Rosy became very finicky about peeing at night, leading us to suspect there was another animal in or near the yard. A few mornings we woke up to find the yard ransacked — dog toys torn up and tossed in the pool, the small gate that’s held closed with a cinderblock busted open, the pool vacuum pulled *out* of the pool, etc. Compounding the issue, Rosy has finally realized (five years later) that she’s capable of barking, and she’s taken it upon herself to do so whenever she hears/smells a rival in the vicinity. Oy.

Geoff set up a motion light and a couple of cameras and before long we identified the culprit: raccoons. A family of five, to be precise, although most nights it was just one. He set up spikes at the top of the fence and netting on the back of the fence to make it harder to climb over, but they just learned where the obstacles were and avoided them. 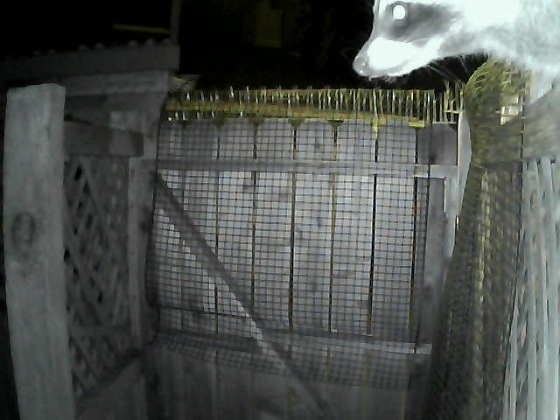 After reading online that raccoons are drawn to swimming pools, he set up an electric fence around the perimeter of the pool. It has five wires and you need to be touching two of them at the same time to get shocked. We only turn it on at night so Rosy won’t get an unpleasant surprise.

We got some pictures of them investigating the electric fence, then they stopped coming by. For a few weeks it seemed like the deterrent was successful. Then, a few nights ago, this:

Amazingly, Rosy slept through the commotion (as did we). Little bastards.