I decided to “save myself some work” by using Houseworks staircases in the Victorianna, instead of building the kit stairs. I don’t know if it really saved me any work, but the first floor stairs are finally finished and they look good!

I started by gluing strip wood to the side of the staircase, to make up for the prefab stairs being slightly narrower than the kit stairs. Then I glued the staircase assembly to the wall, using clamps to hold it in as it dried. 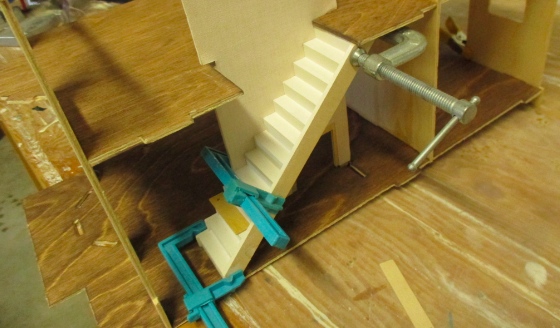 Possibly because the kit pieces are slightly warped, the staircase is not quite at a 45-degree angle and a little crooked. At the bottom, it overhangs a tiny bit into the space where the back wall will be, so I’ll have to sand down the strip wood there to allow a good fit. The crookedness shouldn’t be noticeable once everything’s put together, however you can see that the bottom four stairs are slightly off from the stair cutout built into the wall. 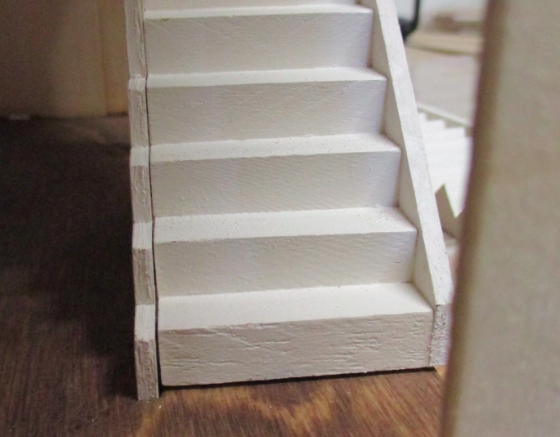 The bottom two were the worst, and I cut pieces of strip wood to add to the fronts to mask the discrepancy. 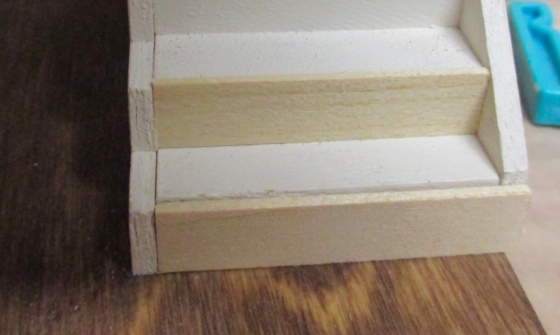 Next I got to work on the treads. I couldn’t use the ones that come with the stair kits, because the bottom four need to be slightly wider, and the rest of them won’t have spindles and therefore don’t need the pre-drilled spindle hole. (If I were painting them maybe I could have filled the holes with wood filler, but I’m doing dark stained treads.) I went to the dollhouse store looking for strip wood the same dimensions of the tread — 1/16″ thick and 7/16″ wide — and, guess what, that dimension doesn’t exist in commercially available strip wood. Bah.

I bought a grab bag of 1/32″ black walnut veneer off eBay thinking I could use it for both the staircase treads and the hardwood floors. Turns out it’s not going to work for the floors (more details here) but it worked for the treads. Since the wood is half the thickness of the original staircase treads, I cut two pieces for each tread and glued them together. 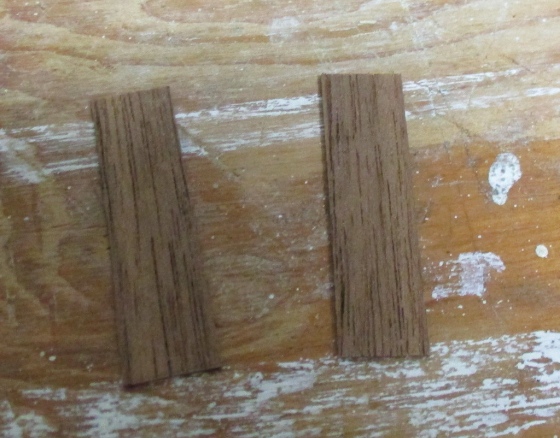 Then I stained the treads with Minwax Natural, which enhanced the dark color of the wood. 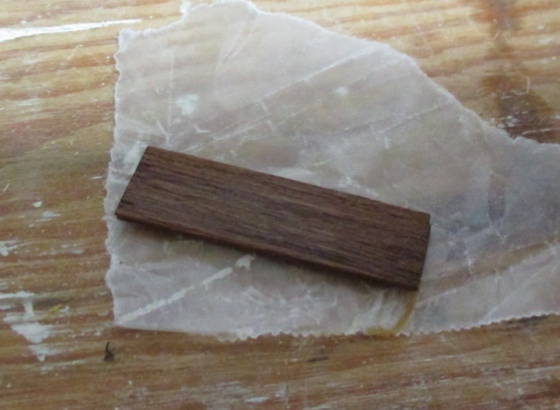 I cut these with scissors and ended up with some not-quite-straight edges due to the grain, but they’re close enough to being square, especially considering they’ll be very hard to see once the house is put together. 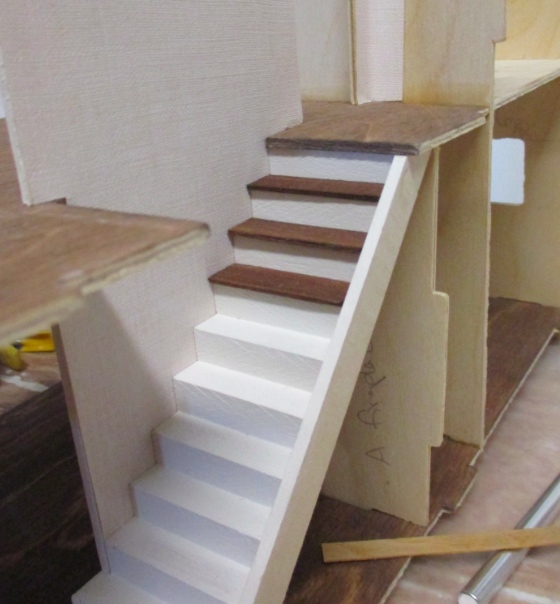 Even though I didn’t end up using the same wood for the floor, the color is pretty close. 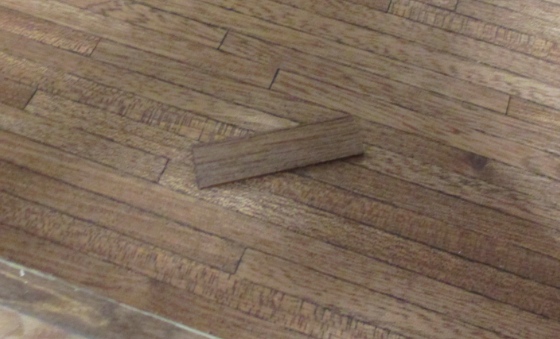 In the enclosed part of the staircase I’m not bothering with a railing, which surely not to code (or, as Mike Holmes would say, “This is NOT how we do things.”) But I wanted a short railing on the bottom for steps, like the kit’s original staircase has.

I’m getting tired of Houseworks’ only style of half scale newel post so I decided to make one of my own. I Googled pictures of square newel posts and saw a lot of simple ones with a baseboard type trim at the bottom and a cap at the top.

I grabbed a piece of .25″ square basswood and a piece of railing off my ever-expanding scrap pile. Yep, totally doable. 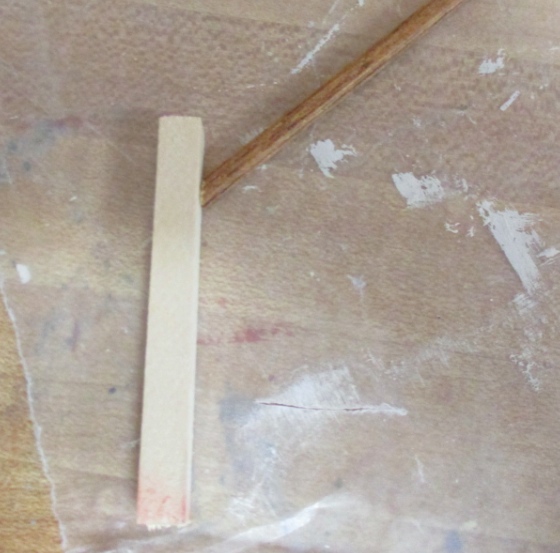 I stained the top of it with the Minwax Dark Walnut stain pen, and painted the rest Tuscan Beige. 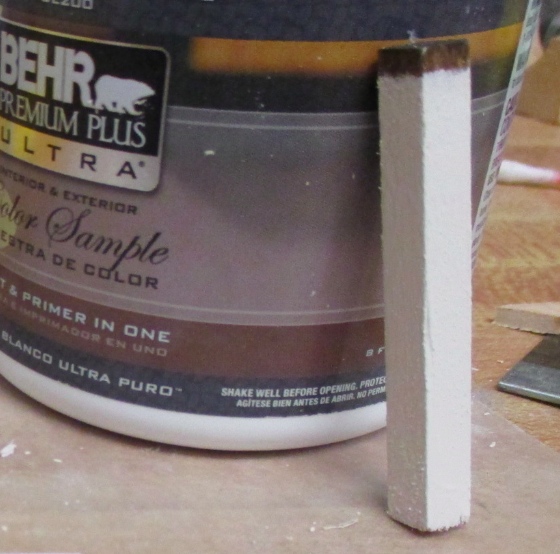 I created the bottom out of 1:12 baseboard. The corners are mitered but the pieces aren’t perfectly sized, so I filled in the cracks at the corners with wood filler before painting. 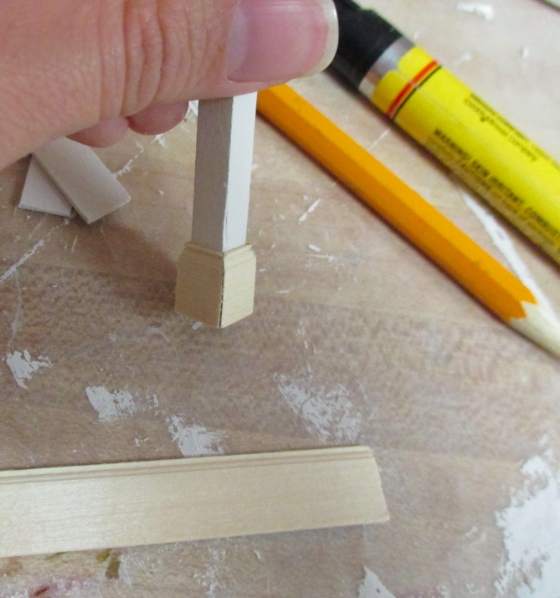 I finished off the cap with a stained piece of basswood going around the bottom, and a round piece on the top that’s cut off from a 1:12 newel post that I used for some other purpose. Reminder: never throw anything away, never know when you’ll need it!

I wanted to add another piece of decorative trim underneath the cap, painted white, but was having a hard time with the mitered corners and decided to take the easy way out. (My miter box needs to be replaced, the slots are totally chewed up so my cuts and angles aren’t as accurate as they should be…) 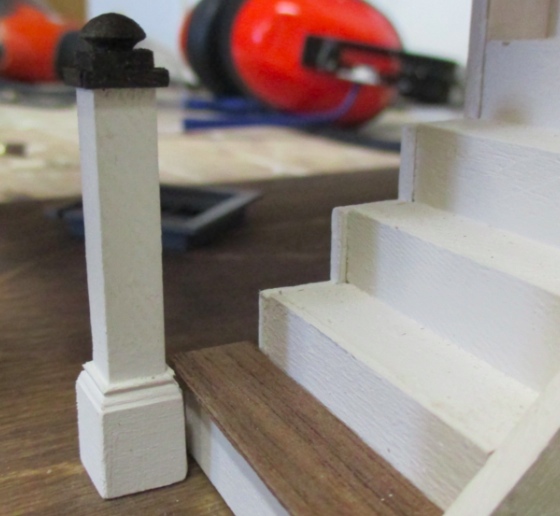 I had planned to put the front door in this part of the house, which would have had it opening right onto the staircase. This is by design in the Victorianna but my newel post takes up space that wouldn’t have been taken up by the kit stairs, and when I put the door in as a test, it barely opened without bumping. I knew it would bug me forever, so I decided to close off the door hole here and put the front door on the other side of the house.

But, that means the staircase I’m working so hard on will be almost impossible to see! What about a window? 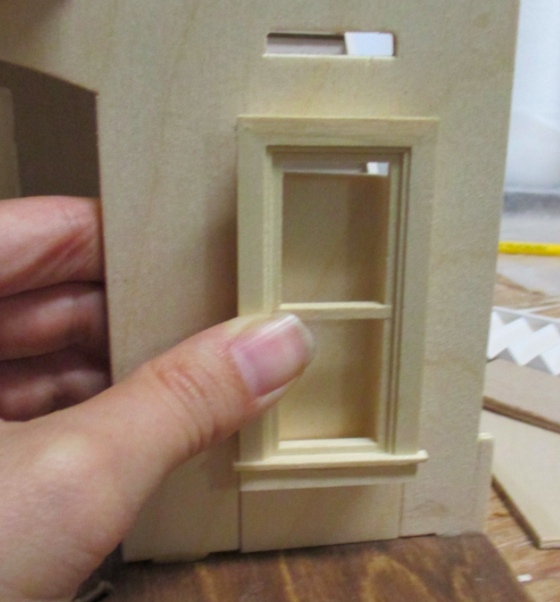 Besides newel posts, something else that’s sorely lacking in 1:24 scale is small window options. Houseworks has several styles but doesn’t offer half-height versions the way they do in 1:12 scale. A big window seemed wrong here, though, so I had to improvise.

I used an Xacto knife to cut off the top piece of the window. The 45-degree joint on the right split easily, but the one one the left didn’t and a chunk came out of it when I made the cut. Oops. 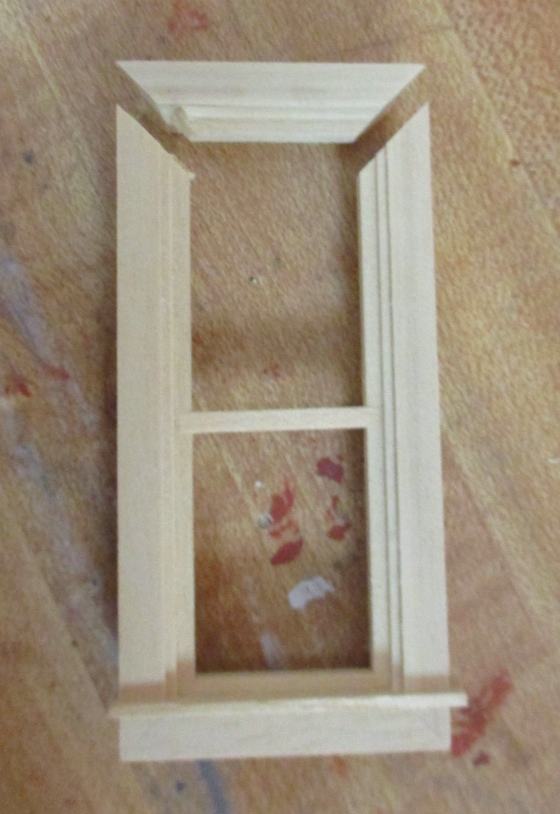 Then the window didn’t fit in the miter box (it almost did, but the railing got in the way), so cutting down the side pieces was also a challenge. But I managed it without destroying the window. I looked online for pictures of piano windows and saw some with decorative muntins, which gave me the idea to use this plastic left over from the Fairfield. 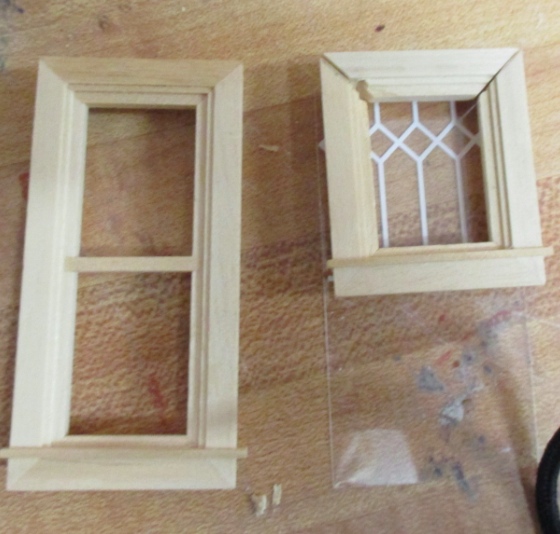 After gluing the window back together, I was able to mask the big hunk missing from the inside corner with wood filler. It’s not perfect, but once it’s painted it should look okay. 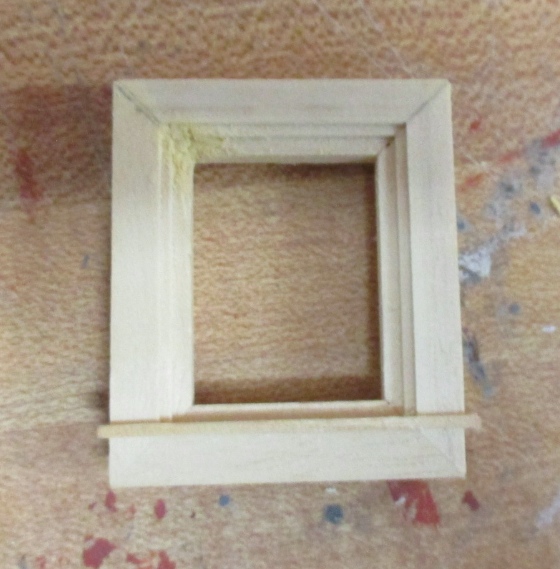 I figured out where I wanted the window to go, and cut the door punch-out down to fill in the bottom part of the door hole. 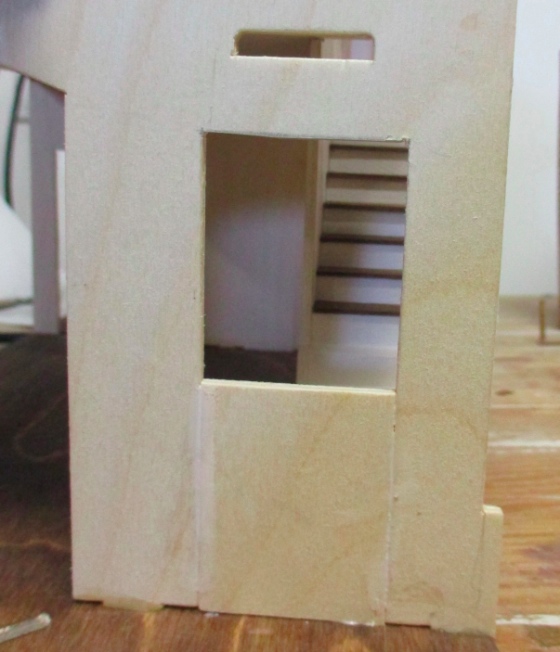 I was planning to fill in the top part of the hole with strip wood, but now that I’ve seen it I think the window needs to be higher than this. My poking around online turned up a lot of pictures of front windows at the same height as the top of the door, and that’ll also let you see more of the staircase. So, eventually I’ll add strip wood to the bottom of the this hole instead, and the top of the window will be at the top of the hole originally meant for the front door. 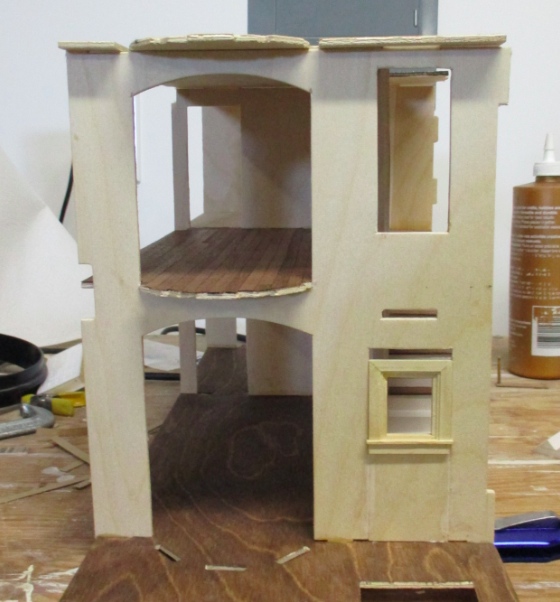 Okay, time to finish the stairs. The bottom four stairs will have spindles, which I painted with Tuscan Beige.

I’ve learned that just gluing the spindle and hoping it will stick never works out. I tried to use my finger drill to make holes for the spindle bottoms, but this caused the wood to split. On to Plan B: I used the pilot punch to make a pinhole in the tread. 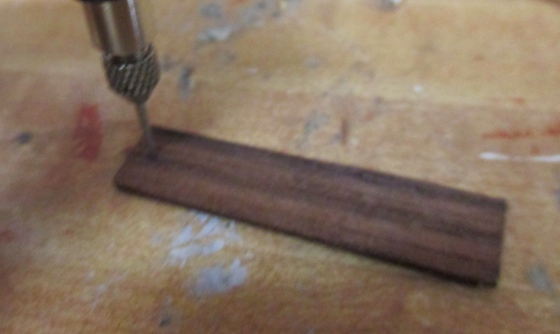 Then I poked a pin up through the bottom.

I cut off the long end so only a tiny pointy piece sticks through. (Sorry for the fuzzy picture!) 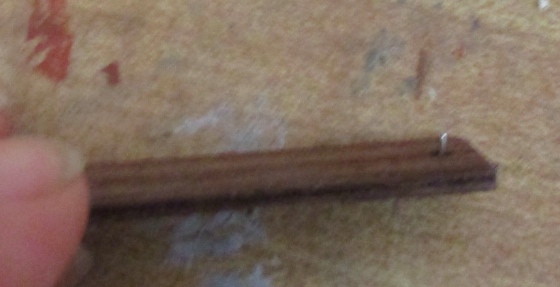 Finally I stuck the spindles onto the pins. I also used a dab of glue, but I think the pins are mostly holding the spindles in place. 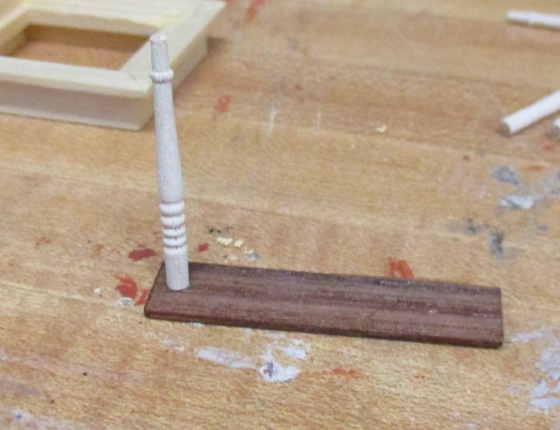 With the spindles attached, I glued the treads onto the bottom four stairs. 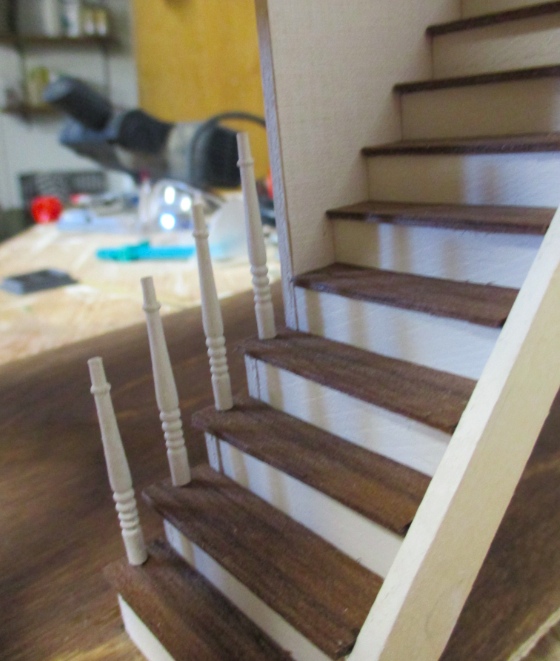 Before I could glue in the newel post, I had to do the hardwood floor over here. 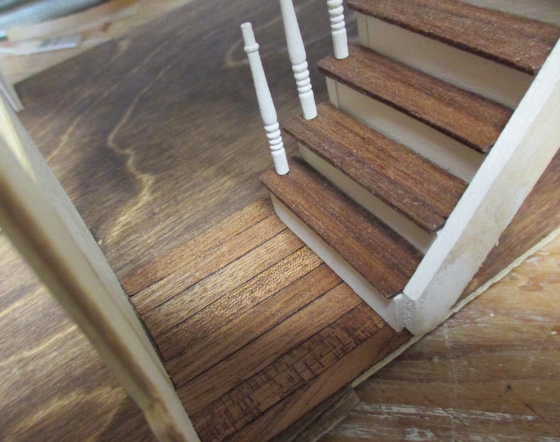 Here’s how it’ll look. You can see in this picture how the newel post is really too close to the wall for there to be a door here. 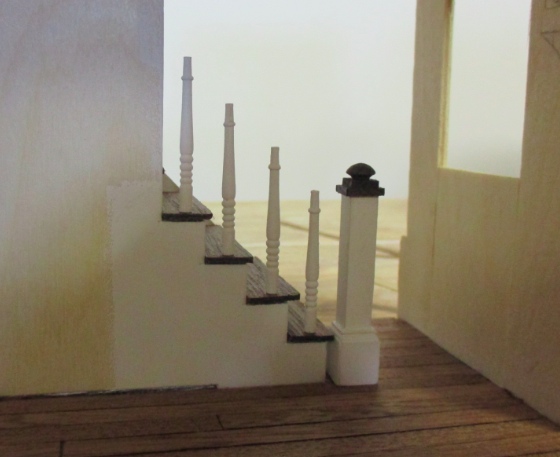 This is half scale porch railing as opposed to interior staircase railing… I had a short piece of it lying around, so I decided to use that rather than cut into a new piece of regular railing. I cut it a bit longer than necessary (as seen in the photo below), then put the newel post in place and used that as a guide for how much shorter to make it. 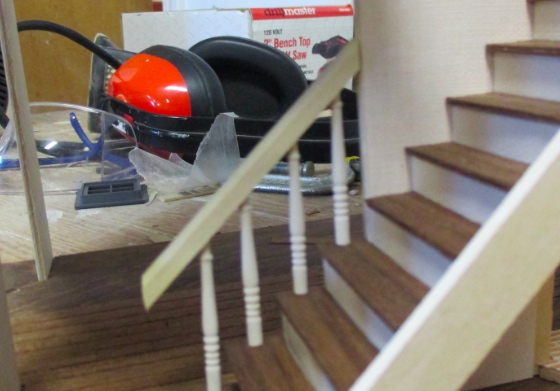 I stained the railing with Minwax Special Walnut. I like the color better than the Dark Walnut of the stain pen and it’s a close match to the stair treads, but the Dark Walnut cap on the newel post doesn’t match at all. Oh well. 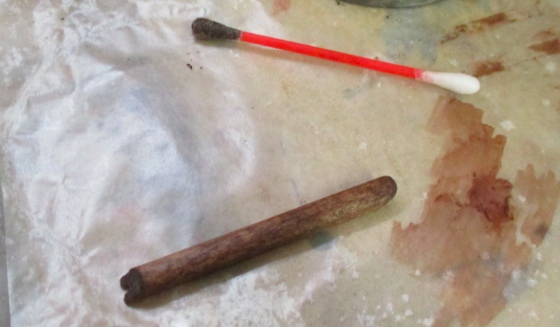 Ta da! Looks pretty classy, if I do say so myself. 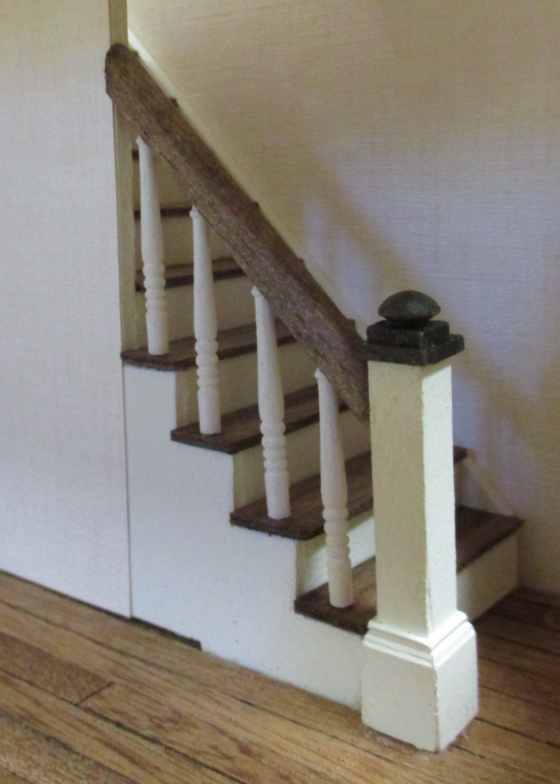 Here’s the view through the window hole. 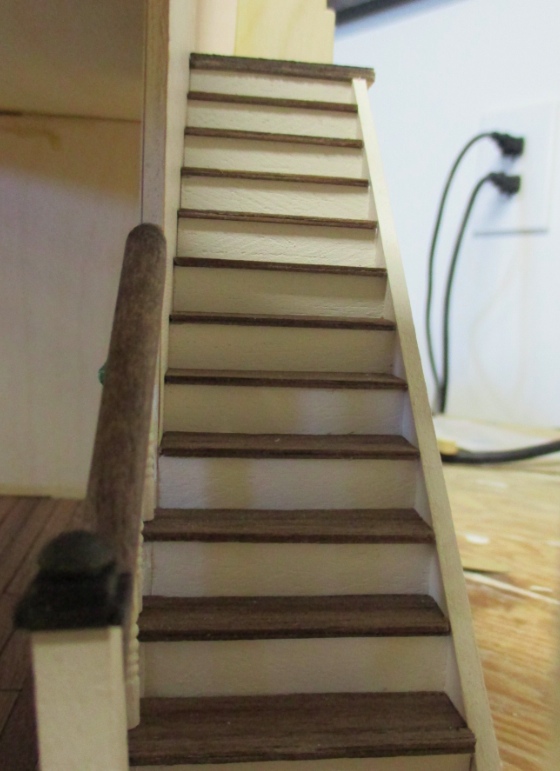 And the back side that won’t be visible too much longer. 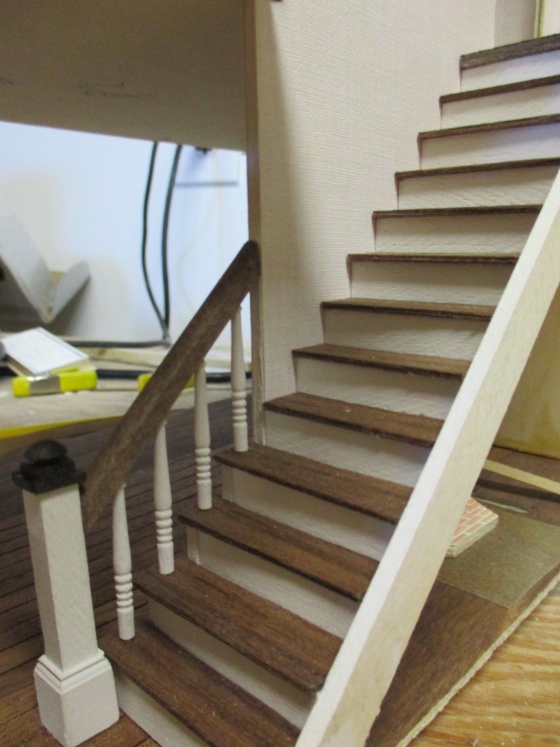 I still need to do the second story staircase, but it won’t have any railing, so won’t be quite as complicated. (Famous last words…)

No mess hardwood floors made from wood veneer