The next step after taking down the wallpaper was to wire the house for electricity. In the Orchid, I put tapewire on the floors above where I wanted lights, and attached the wires through tiny holes. This worked well so I decided to do the same in the McKinley.

Since the back of this house doesn’t show, it was easy to run tapewire along the back. Geoff used the Dremel to cut slits in the back wall and ceiling of the fake hallway. We pulled tapewire through these slits and ran it to the second and third floors. You can’t see the slits, and the wire will be covered with wallpaper. 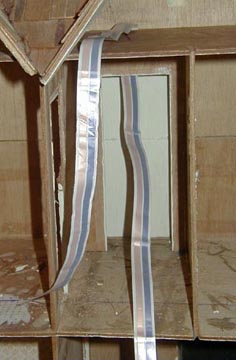 The roof was loose anyway, so I removed it to make pushing the brads into the tape in the attic easier. 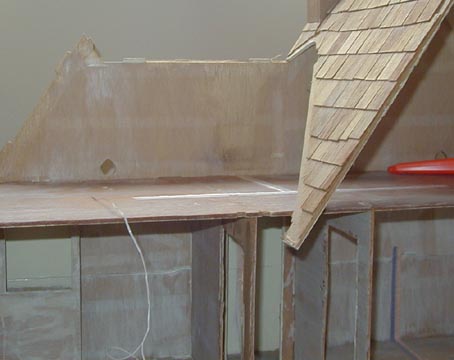 The first light I did was in the bathroom. I did it myself (even the drilling!) and was so proud when I turned the switch and it worked. I am waiting for some more fixtures to arrive from Dolls House Emporium. 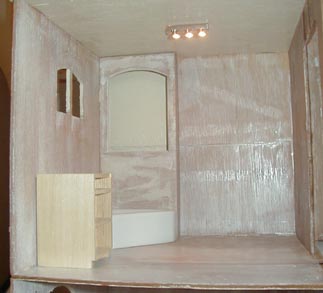 I realized after putting in the bathroom light that I’d gotten some Kilz on the ceilings. The ceiling paint was kind of yellowed (probably due to its age) so I decided to repaint them before doing any more lights. (I covered the one in the bathroom with white paper because it was easier than painting around the light fixture.) I’m glad I decided to paint the ceilings because the new coat of paint made a HUGE difference. It really brightens up the rooms! This also gave me an opportunity to put wood filler on the tabs in the ceilings and smooth them out before painting over them. You can’t see any tabs now, which I’m very happy about.

Compare the fresh paint with the off-white tower and porch: 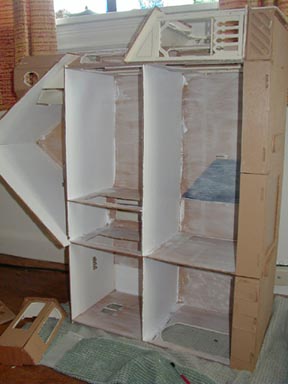 The next lights I did were the two bedside lamps in the bedroom. I wanted to be able to remove them (rather than hardwiring them like all the other lights) so I decided to put in outlets for them to plug into. Since the outlets and plugs are not to scale, I hid them under the bed. The outlets plug in over the wallpaper so first I had to wallpaper the bedroom. I used actual dollhouse wallpaper (I usually use scrapbook paper). I really like the wallpaper but found it to be a lot harder to deal with than scrapbook paper because it was flimsier and didn’t want to glue down as easily. 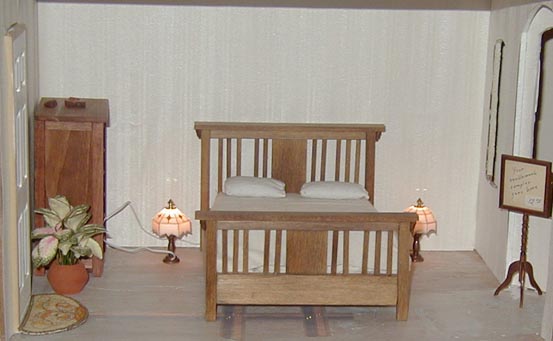 These are the only lights I’ve done so far. I had an extremely frustrating time trying to get a hanging lamp into the kitchen. Between not knowing how to hang the lamp (it didn’t come with any kind of adapter and I didn’t want the chain and wire just sticking into a hole in the ceiling) and the little pieces breaking off the lamp and refusing to let me glue them back into place, I have decided it’s not worth it. Instead, I’m going to get this modern ceiling fixture HBS just started carrying. I haven’t gotten lights for the living room, hallway, or attic yet either.

Update April 15, 2005: Here are the rest of the lights I added to the McKinley. I replaced the ones in the bedroom with Tiffany-style lamps and added ceiling fixtures to the hallway, kitchen, and living room. The only room I haven’t done yet is the attic. 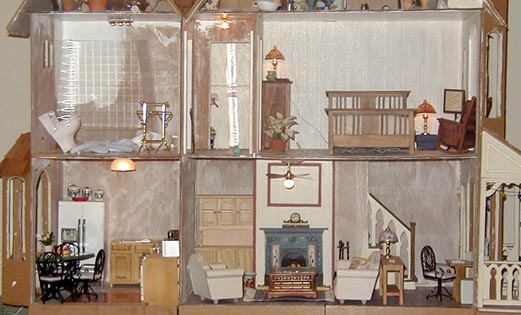 (The table lamp in the living room is not electrified… just there to look pretty!)