I started building the Fairfield after receiving a set of Avon Victorian Memories kitchen furniture as a gift (most of which I’m not actually using in the house!) Since this is my first half scale endeavor, I’m furnishing the Fairfield from scratch. I still have a lot of furniture to buy / make, but here are pictures of some of the first semi-completed rooms.

I intended to use the Avon kitchen in this house, but decided instead on something more modern. (This picture of the kitchen was taken when I was debating putting a window where the door should be. I decided instead to board up the door altogether.) 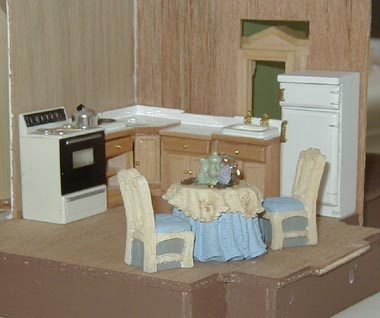 The cabinets and fridge are from a Town Square set, and the oven is an Acme magnet. The table and chairs are from the Avon kitchen. I’ll be doing a bit of bashing to the kitchen furniture before it’s done. I want to replace the fridge handles and sink faucets with ones that look more realistic. Since I’m using the oven magnet, I didn’t need the oven that came with the Town Square set. I removed the door from the Town Square oven to make shelves for cookbooks. I will cover the stovetop up, maybe with a microwave. I’m also thinking of getting another of these kitchen sets and bashing it to make upper cabinets… or maybe putting up white shelves with pretty dishes on them instead.

I bought Delft tile paper for the kitchen, but the dollhouse shop only had one sheet and it wasn’t big enough. So, I scanned it, did a little color correcting to make the blue darker, and printed it out. I wouldn’t have been satisfied with this in one inch scale (even on the best setting, my printer is not as crisp as a professionally printed design) but in half scale it worked pretty well! I put the Delft paper on the walls with the cabinets, and a blue scrapbook paper that looks like sponge painting on the other walls. 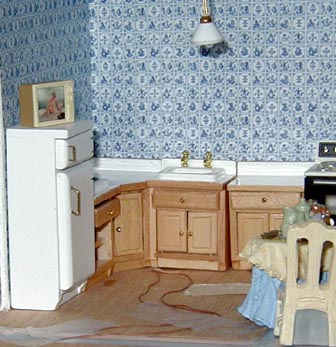 (The wires on the floor are from the sconce in the front entryway. I drilled a hole and ran the wires through the kitchen wall.)

I’m starting to think this table looks a little out of scale in the room. I may replace it with a Cassidy Creations pedestal table. 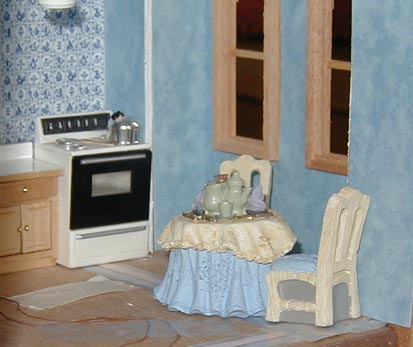 It was hard to get a good picture of the upstairs hallway. Right now it has the hutch from the Avon Victorian Memories kitchen against the wall, and the sofa from the Victorian Memories living room in the corner. The sofa wasn’t really necessary there but I like how it adds a little interest to the room. The upstairs porch is outside the windows but I opted not to put in a French door here. So the little people have to climb over the couch to get out! 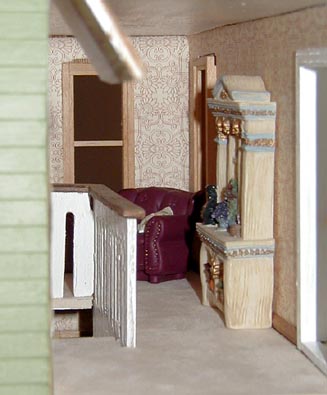 I bought the Avon Country Cottage parlor set, intending to put it in the Fairfield’s living room. But, I found that with the high ceilings the furniture looks tiny. It looks a lot better in an upstairs room with lower ceilings, so I decided to convert one of the bedrooms into a sitting / reading room. I plan to make the nook between the fireplace and the wall into a built-in bookshelf, with half scale versions of the same books I made for my Orchid. At first I was sorry to lose a bedroom, but I think the furniture looks pretty good in here! 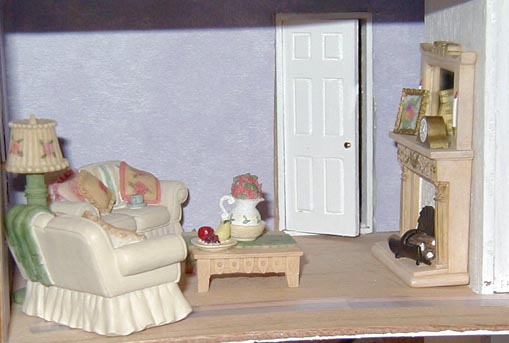 Next, the bathroom. Even though it’s tiny I am so pleased with this room. I especially love the wallpaper. It’s stiff scrapbook paper, which helped with gluing it into the finished room. I haven’t put the door trim in yet… those raw edges will be hidden once I do. There will also be trim around the top and bottom of the walls to hide the gaps. The furniture is a set from Town Square Miniatures. 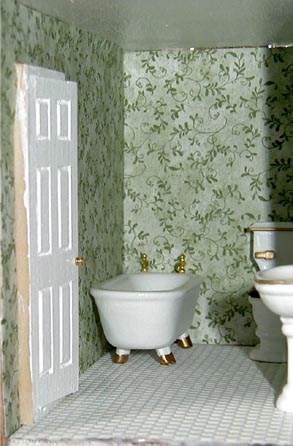 The toilet and tub may swap places… haven’t decided yet. The mirror that’s propped up in the back will go over the sink. 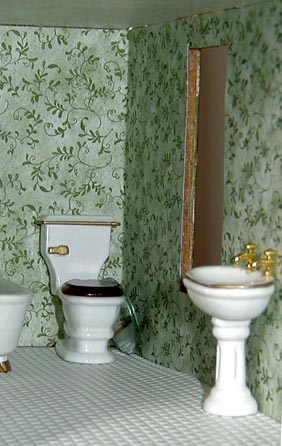 I also just bought the Australian Avon bathroom set and will be putting one piece from that set (a dressing table with accessories) in here. (The set also includes a neat wicker chair with a bathrobe draped over it, but it looks way too small compared to this furniture!) 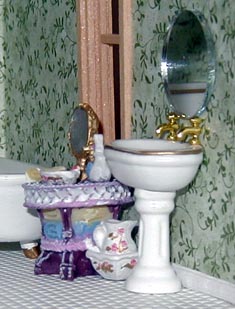 Finally (for now), I decided to make the tower room into a laundry room. It’s just big enough to fit the Acme magnet ironing board and the Cassidy Creations washer and dryer (which haven’t been painted yet). 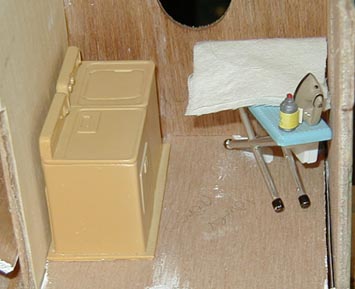 These are the rooms that I’ve funished so far, but I have pretty clear ideas of what I will do in the dining room (Mission-style dining room kit from Northeastern Scale Miniatures, like this one which I have already completed in one inch scale), bedroom (the Heywood-Wakefield furniture from SDK Miniatures), and the third floor (family room on the side that’s above the bedrooms, including computer desk and widescreen TV from HBS, ping pong table from SDK Miniatures, and contemporary couches featured in the July Dollhouse Miniatures). The part of the attic that’s over the bathroom will be a teenager’s bedroom furnished with the campaign bedroom set from Cassidy Creations.

Of course, since all these plans take MONEY and I’m trying not to spend too much at once, the plan is to buy this furniture over time. I have no idea what to do with the living room… but am hoping I’ll find something I love at the Good Sam show in October.