Geoff’s been busy building an airplane (really!), so I got inspired to start working on the unassembled dollhouse that had been sitting around for years. He set up a card table for me in a corner of his hangar. Then I saw how much fun he had putting his airplane progress up on the web and decided to be a copycat. Hey, it’s not about originality… it’s about whoever has the most toys when they die. Or so I’m told.

Initially, I planned to cobble these three components together. These are not my finished pieces… I “borrowed” the pictures from Miniatures.com. [Note from the future: I ultimately decided to leave the garage for another project, because it’s a bit too big to look good next to the house.] 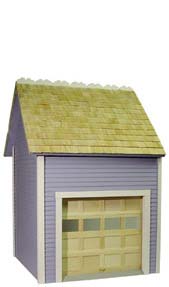 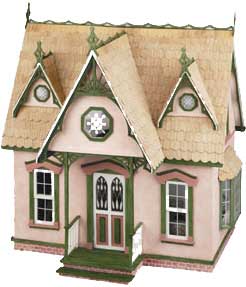 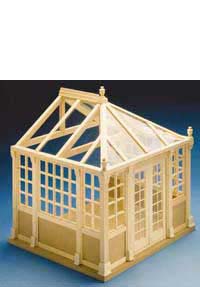 I have already painted the pieces of the conservatory kit (which will be an add-on kitchen for the house) but they were sitting around my damp old apartment for so long, they’ve become warped and don’t fit together anymore. Geoff provided me with a little file thingie to file the joints down but I’ve become very frustrated. And with frustration comes tantrums. So those pieces have been set aside until a later point. Meanwhile, I have started the house. 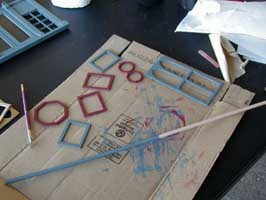 First step is to assemble windows and the front door. I’m not doing the bay window, or either of the double-hung windows on the sides of the house, since those walls must be flat so the garage and conservatory can butt up against them.

First attempt at window gluing. Blue ones went fine — I was using this special glue Geoff had but it was messy. Switched to Elmer’s white glue for the red windows, not realizing that white glue doesn’t bond to plastic.

I decided I didn’t like the flower pattern on the octagonal windows, so I am gluing my own plastic stuff on instead. It’s photo album material. I wanted to use overhead projector sheets but didn’t want to plunk down $25 for a whole box. Hopefully it’ll work… once I get some different glue.

I also started some preparations on the walls of the house. This is the front of the house. Those two pieces of door will be glued together — I know that real houses usually have doors that are all one color, but I couldn’t deal with white on the outside or blue on the inside, so this door will be two colors. Whether it will look dumb remains to be seen. 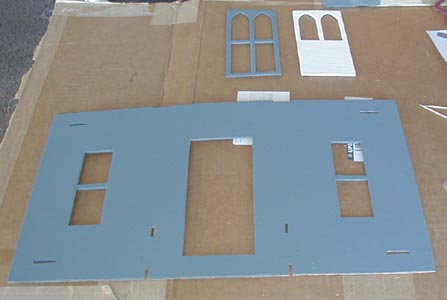 Here is one side wall (the one that’s supposed to have the bay window on it) and the outer wall of the conservatory kit. Lucky for me, the French doors are sold individually so the door leading into the kitchen will match the rest of the kitchen. Geoff helped with the hole… okay, he did the whole thing. But I measured it first! 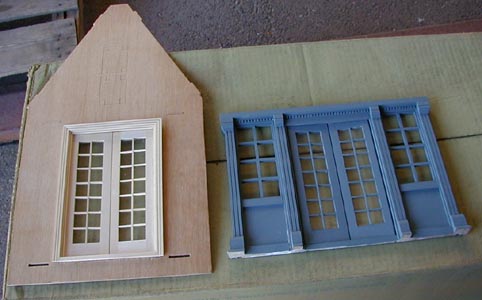 I was going to cut holes for doors on the other wall too, but put that off. I want at least one door leading into the garage, and preferably on both the first and second floors (there is a room above the garage that I want to be accessible from inside the house). But on the first floor the stairs may be in the way, and on the second floor there’s really no room for a door because of where the stairs come up, and how the roof slants. I hope to figure out a solution because it *really* bugs me when dollhouses have rooms that can’t be accessed realistically. What, do the little people know how to levitate?