I’ve been painting window casings. The outside casings are red, and I’ve decided to do the inside ones blue… the same blue as the exterior of the house. There’s a method to this madness. The French doors that will lead into the conservatory addition will be blue, because the conservatory itself is blue. It would be hard to paint the door half blue (the side facing the conservatory) and half white (facing into the house)… at least, hard for someone who has trouble staying inside the lines, which I do. So I figured I’d do the window and door casings blue as well, and have a nice white-and-blue theme.

Here are the exterior window casings for the front of the house. There are actually a few more pieces (like those corner blocks that I didn’t paint) that I’m leaving off to make the house less cutsey. 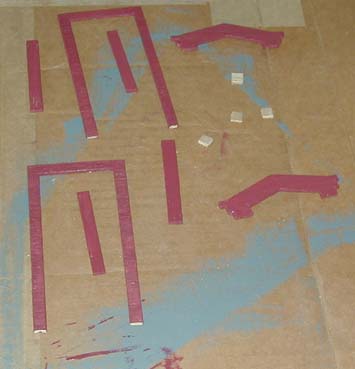 I also finished painting and assembling the front door. It isn’t attached until later in the process, but here it is in all its glory… 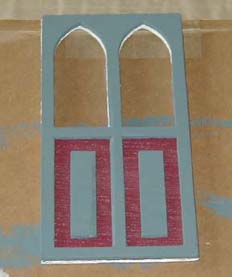 Hopefully, you won’t be able to see the white (interior) paint when the door is standing up. It’s hard to tell from this picture, but the photo album material I used to make the windows seems to be working fine.