I am ready to lay the hardwood floors on the first floor of the house. (The second floor has to wait until after the wiring is done and the built-in bed is constructed to cover those ugly brackets…) I painted the flooring with two coats of varnish stuff (not exactly sure what it is, Geoff picked it up at Home Depot), which gives it a nice finish. 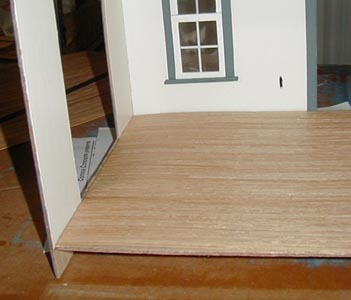 Once the floor is glued down, I am going to assemble this closet kit to go in the smaller downstairs room (by the stairs). I hate it when guests have nowhere to hang their coats!

Update, February 14: Geoff finally brought me the digital camera so I could take some pictures of what I’ve been working on at home. I have assembled the conservatory that will be used as a kitchen, and started building the kitchen furniture. All that’s missing is the trim at the peak. I want to use something slightly different from what came in the kit, which I need to order. (Oh, in these pictures the French doors are missing, too. When I painted them, a bit of paint got on the windows. I removed the doors so I could get the paint off with rubbing alcohol.)

Here’s the assembled conservatory. From this angle, you can’t see that I made a mess with the glue on the windows… 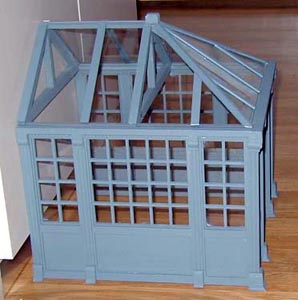 From another angle. Inside the house are the first cabinets I assembled, and the tiles I bought for the floor. 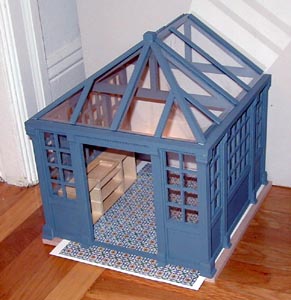 Here are the cabinets I’ve started. These will be the oven, sink, and dishwasher. Haven’t decided yet which side the fridge will go on.

Now that the pieces are coming together (literally!), I am working on some stuff to go inside the house. For the past few weeks I’ve been scanning book covers and shrinking them down to 1″ scale in Photoshop. I’m scanning the dust jackets off hardcover books because they’re easy to lie flat on the scanner. To preserve the quality, I am scanning and printing the pictures at 600 dpi. This has made for some pretty big files… 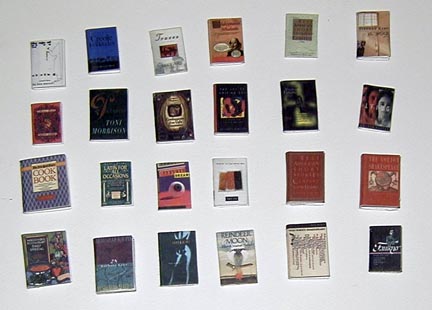 And, I built this desk from a kit. It’s a Magic-n-Miniature kit that I bought at a show last year (I checked, they don’t have a website). I think I will paint it white and do some weathering to make it look older. The drawers were supposed to be on the right, but I swapped them so they’ll show when I put the desk against the dollhouse’s left wall. 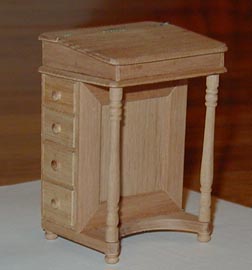 Update, February 20: Last Sunday I went to the dollhouse store to pick up the chairs and fridge I ordered. The fridge is great. The chairs, I’m not as happy with. They’re made slightly differently than the one I already bought (even though they are the same style / item number from the same manufacturer). To be frank, the newer ones look cheaper to me. Some of them were kind of squished, too, so I didn’t get as many as I intended. Now I have four chairs and the more I play around with the kitchen layout, the more I think I will only use two of them. To their credit, the folks at Dollhouses, Trains, and More have been very patient with me and their service is great. It’s not their fault Handley House is churning out crappier products than they used to. 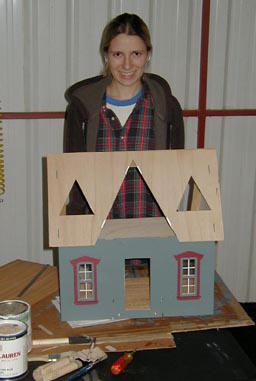 Then we went over to the hangar to move an airplane wing from Point A to Point B. I think Geoff was surprised I didn’t drop it. While he was puttering around, I put the roof pieces on just to see how they’d look. I picked up some charcoal gray paint for the shingles. I’m not sure if they’re supposed to be put on before or after the roof is glued in place. In any case, I will paint the roof and shingles gray next time I’m at the hangar.

Unfortunately, Geoff refused to take the picture unless I stood in back like a dork…