My back-to-back Victorianna will have three bedrooms besides the master, decorated for girls of various ages. The first one I’m working on is the front bedroom on the second floor – it’s on the mirror image side of the house, where the stairs would normally come up. The little girl who lives here is around four years old, with lots of toys!

I started by picking out wallpaper for the three rooms. The one in the middle is for this bedroom. The flowered wallpaper will go in the other second floor bedroom, and the safari paper in the nursery on the third floor.

I like the border but didn’t want it at the very top of the wall, for two reasons: 1) it would be partially covered up by crown molding, and 2) if it’s so high up, how can the girl who lives here appreciate it?! So, I started by cutting off the border with an Xacto knife. 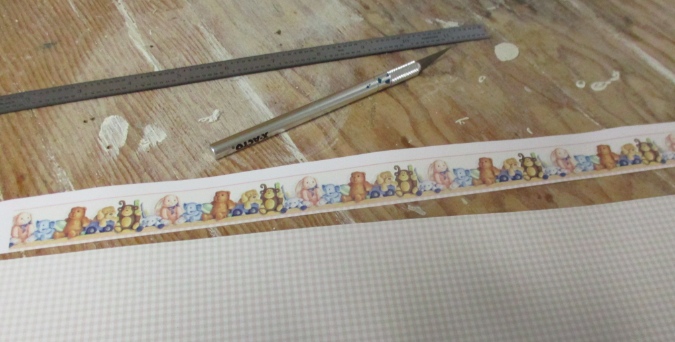 I plan to put it lower on the wall — more at the occupant’s eye level.

This is the SDK Miniatures Gothic Wardrobe that forms part of the hallway wall, before I glued it in. I painted it with the Tuscan Beige trim color and added drawer pulls made from pink seed beads and pin heads. 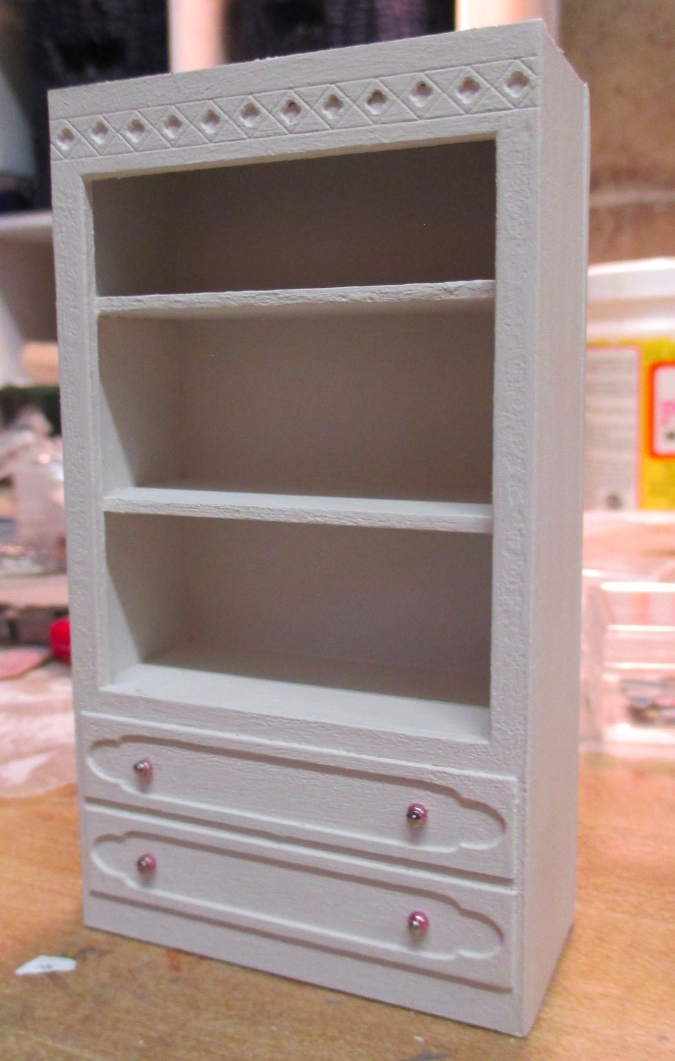 Next I loaded it up with toys. Since the wardrobe is glued in permanently, I also glued in the toys with Tacky Glue to prevent things getting knocked over and needing fixing later. (Hopefully…) About half of these toys are Peruvian ceramic beads. 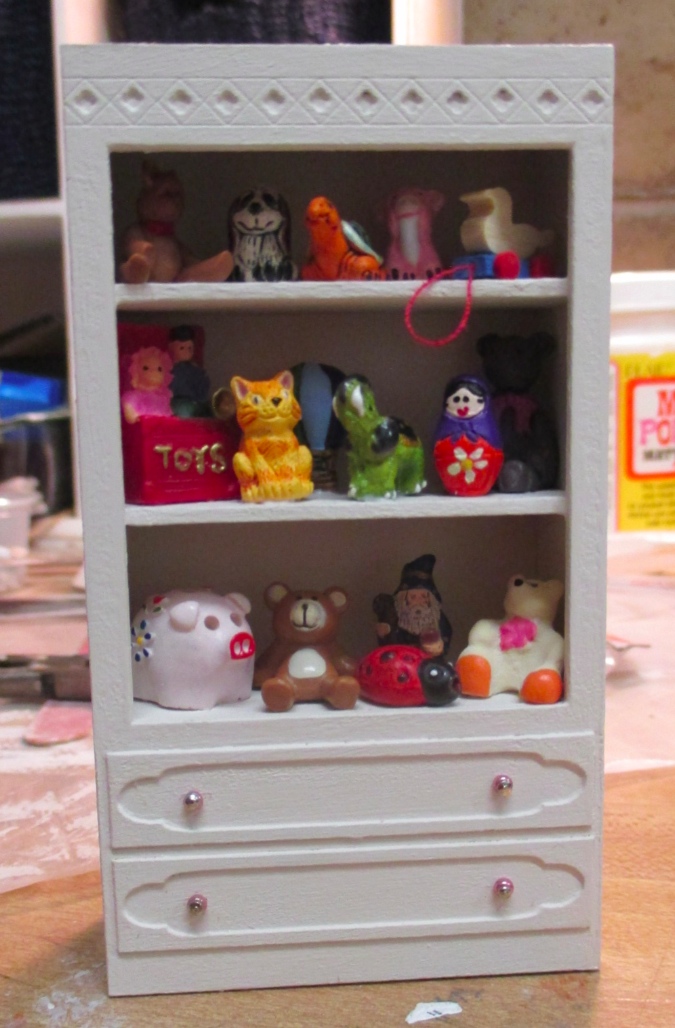 I papered the side wall, then glued in the wardrobe and the wall next to it. 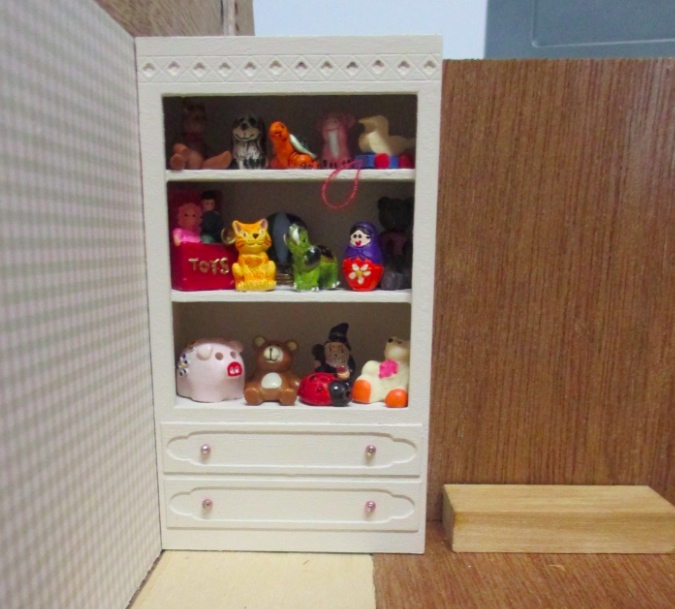 I wanted to use suede scrapbook paper as carpet in the bedrooms but it’s hard to find locally, so I ended up ordering some online. After spending $35 on various shades of pink, thinking one of them *had* to be the right shade, I didn’t like any of them. (And now I have all this pink suede scrapbook paper I have no use for…) Rather than spend more on more colors that might also look pukey, I chickened out and did hardwoods in the bedrooms instead.

I started by staining the floor, very careful not to get stain on the wallpaper or wardrobe. 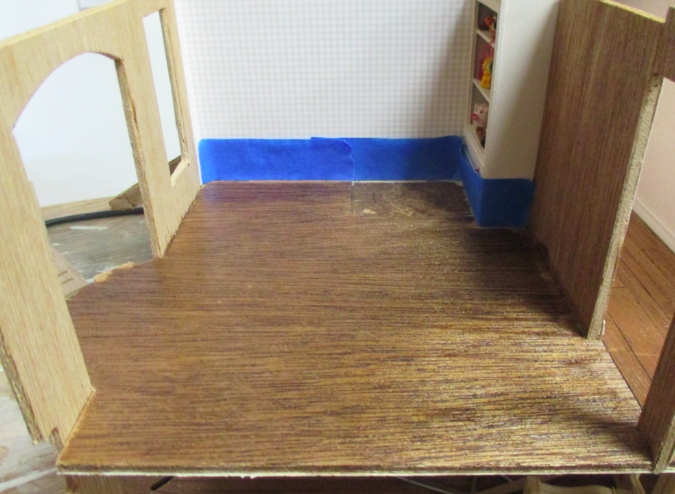 Then I added veneer strips like I have been throughout the house. Here’s the finished floor. 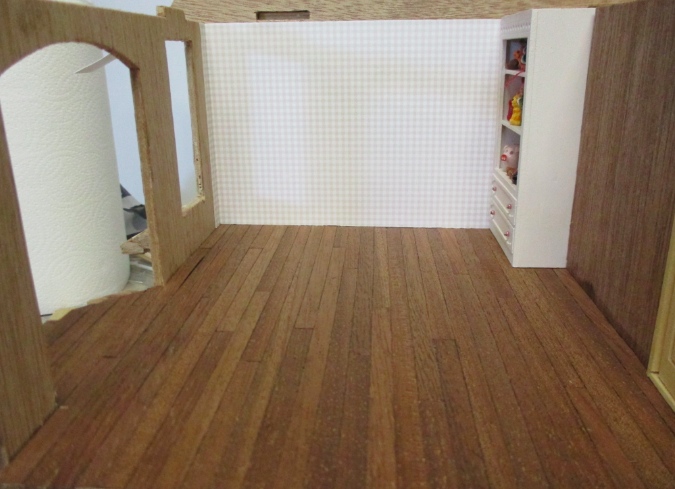 Before doing the rest of the wallpaper, I painted the outside of the bay window arch, which will be barely visible through the windows once the bay is assembled. 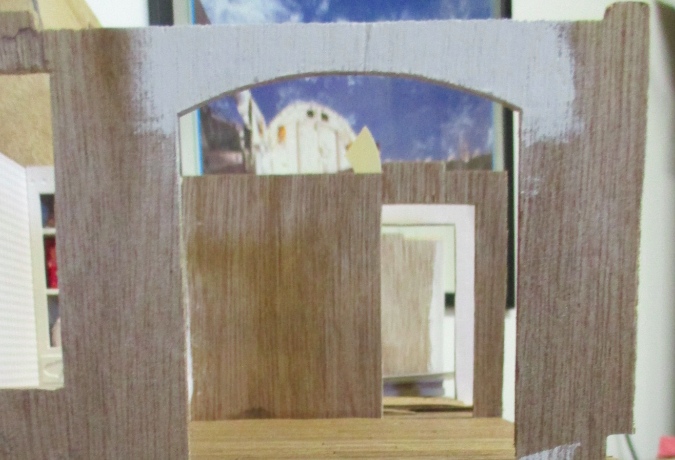 Then I finished the wallpaper, making sure to line up the stripes where the two pieces meet in the corner. 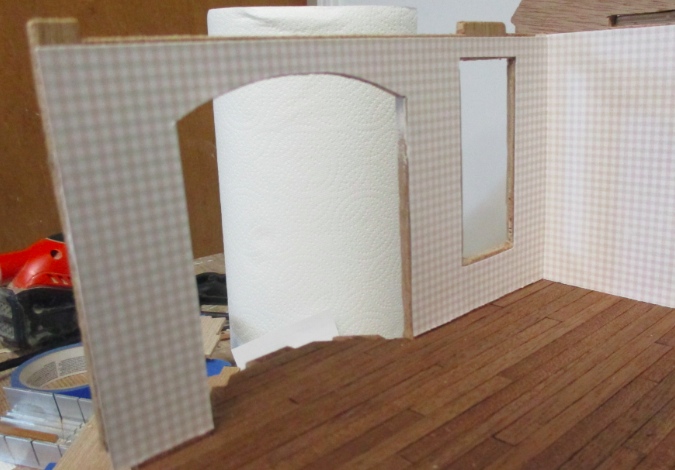 Next I added the border, lined up with the wardrobe’s middle shelf. The joint where this wall meets the wardrobe is a little crooked at the top… I could have covered up the gap with wallpaper, but then my paper also would have ended up a little crooked which would have been pretty obvious due to the straight lines in the design. Instead I’ll cover that gap with a piece of basswood trim, eventually. 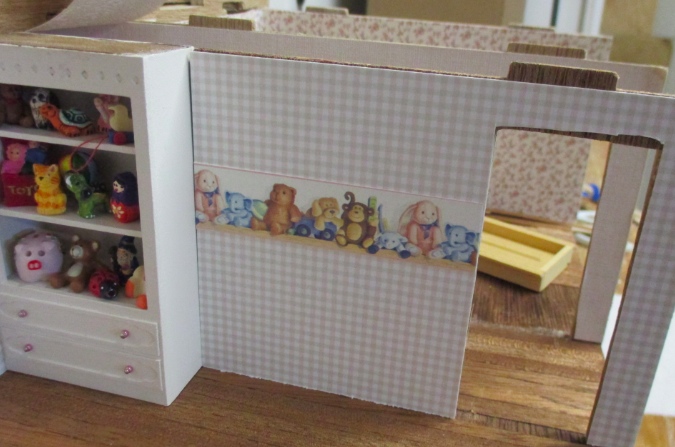 I’ll add trim at the top and bottom of the border, too, but that has to wait until the windows and door are glued in so the border trim can be flush against the door and window casings. I made the sleigh bed from a Heritage House Collectibles kit, with a few modifications. I’ll post a separate blog about that in the near future. 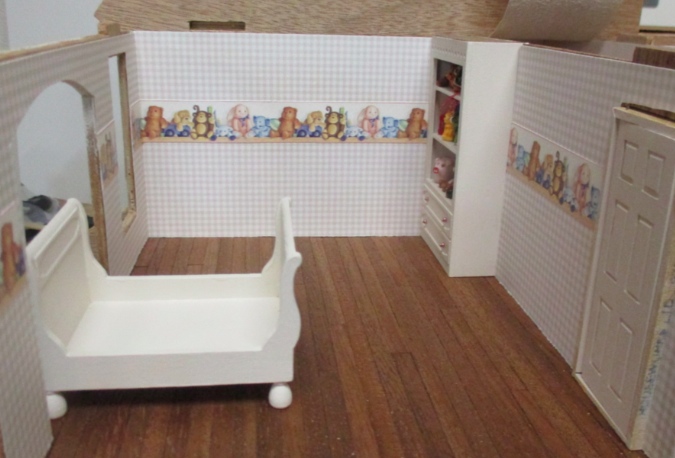 This is all I can do in here for the moment, but I couldn’t resist spreading some toys around. The hobby horse and standing doll came from a swap. The resin bench is from an Avon set, and the green bear was a gift a coworker bought for me on a trip to Asia years and years ago. I knew someday I’d have the perfect spot for it! 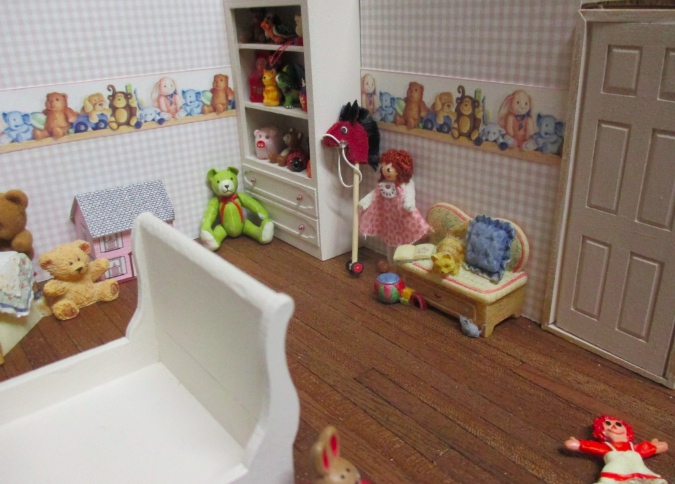 The dollhouse, made out of paper, is from a swap. The tea party table is another Avon piece. I don’t think it was meant to be a toy (it’s from the same set as the stove, hutch, and sink pieces in my Gull Bay), but it always seemed too small. The resin doll, resin bear, and fuzzy bear who’s sitting at the table were eBay finds. 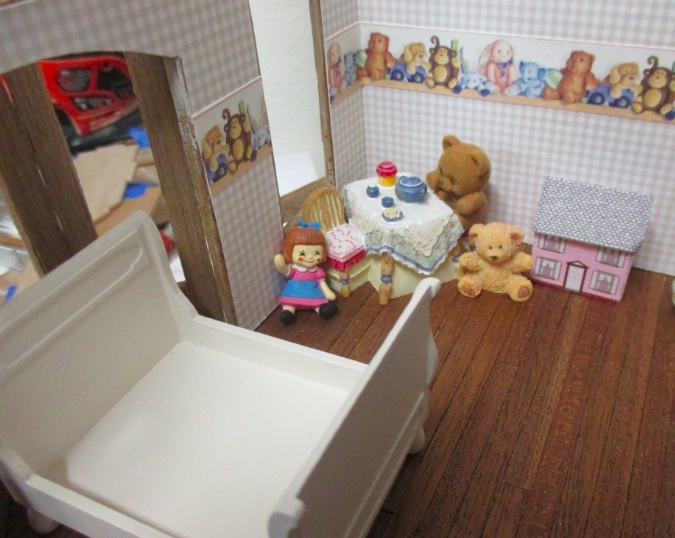 I got the bunny by the bed this past weekend at a miniature flea market (my favorite kind of flea market!). I can’t remember where the resin Raggedy Ann came from, but I love how she’s posed: flat on her back with one leg hanging over the edge of whatever she’s lying on. 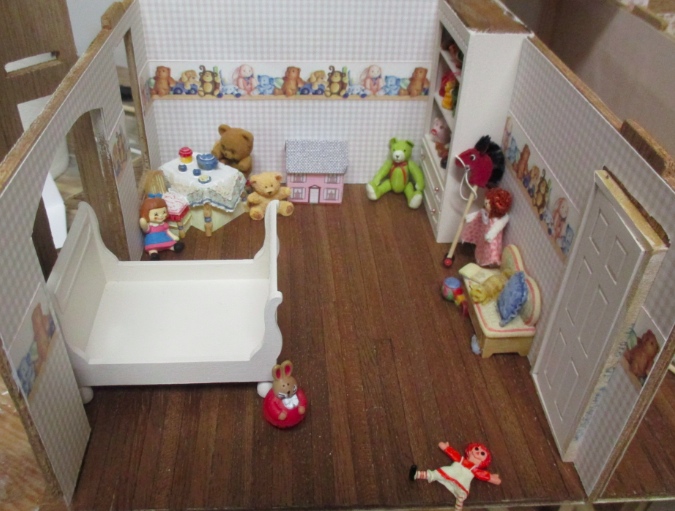 Besides adding trim, I’m also planning to build a dresser for this room, and I’ll clutter it up with even more toys once it’s finished.