The little speakers that couldn’t 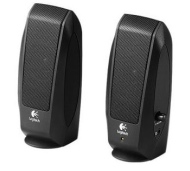 In September, with my trusty Dell (circa 2002) on its last legs, Geoff built me a new computer. We bought all of the components from NewEgg, including a pair of Logitech S-120 speakers that cost $14.99.

I use my PC for gaming, but my habits are pretty low-key compared to most gamers. Adventure games, some Sims now and then… nothing crazy. I also don’t tend to listen to music in the room where my PC is. So I really don’t need a robust speaker system, just a pair of desktop speakers that work. The pair that came bundled with my Dell had served me well and I wanted something like that. Inexpensive, plays sound. That’s not too much to ask, is it?

Apparently it is, because after three months, during which time they’ve mostly been turned off, I attempted to turn on the speakers this afternoon and was greeted by a loud, droning hum. They’d been fine a few hours earlier. I tried jiggling wires, disconnecting and reconnecting the speakers, even moving them to another room just in case another electronic device was interfering. None of it made a difference. My 3-month-old Logitech S-120 speakers are dead. Or maybe possessed by an unimaginative poltergeist. Either way, my PC has been forced into silence.

When we bought the speakers, I purposefully chose this pair over a few cheaper (less than $10) sets since Logitech is a name brand and I figured they’d be less likely to suck than something cheaper. Wrong. While NewEgg’s product page doesn’t have any reviews complaining about this specific problem, over at Amazon

several people mentioned this very issue in the product reviews. I didn’t think to check Amazon at the time, but now that this has happened, I’ll chime in there in addition to writing a review for NewEgg that describes my experience.

Logitech’s website says these puppies have a three year warranty, which seems incredibly generous for a pair of $15 speakers, but from their perspective, why not? The only way for me to get anything out of the warranty would be to mail the speakers back to NewEgg at my expense for a replacement pair I don’t want. That money would be better spent on some better (and undoubtedly more expensive) speakers. Which is annoying, since fifteen bucks seems like an appropriate price point for what I’m looking for.

What am I missing here?